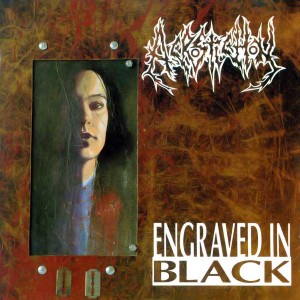 Despite its somewhat legendary status as one of the earliest female-fronted Dutch death metal bands Acrostichon remains a perennial underdog, and one of the scene's unsung heroes. Formed in Tilburg in 1989 the band around vocalist/bass guitarist Corinne van den Brand and guitarist Richard Schouten released only two albums, of which only “Engraved in Black” is mandatory. Both band and album would have made much more of an impact had this debut been released the way it was originally intended, and through a bigger label imprint. Unfortunately the record experienced delays relegating Acrostichon to obscurity in the process. 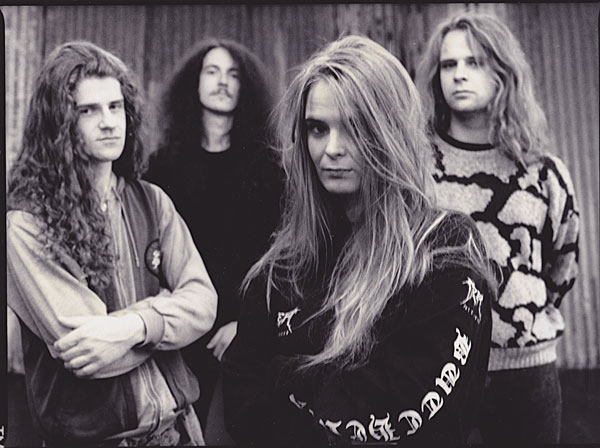 Acrostichon had the distinction of being one of the earliest Dutch death metal bands to have a frontwoman. They go as far back as by predating their Belgian/Dutch genre peers Pathology, who were fronted by a young Rachel Heyzer (later of Occult, Sinister and Infinited Hate), by a single year. Playing an elegant mix of death -, thrash – and doom metal “Engraved In Black” combines the best of all three genres. Above all Acrostichon specializes in crunchy riffing and pumping grooves. There isn’t much of a novelty factor to “Engraved In Black” besides its frontwoman. The idiosyncratic “Engraved In Black” remains one of Holland’s most underestimated debuts. It is considerably more ambitious and involving than some of the works of its more marketable peers. Ambiguous in its writing and beyond easily classification Acrostichon conjured an unmistakable dank and putrid atmosphere through relatively simple means.

Much like the Gorefest debut “Mindloss”, which in an ironic twist of fate Achrostichon lambasted for its archival nature, “Engraved In Black” for its majority consists of re-recorded demo songs, along with one new song written specifically for the session. “Engraved In Black” contains two songs from the 1989 “Epilogue” demo tape, one song from the 1990 “Prologue” demo tape, three songs from the “Acrostichon Live 1991” demo tape, and two songs from the “Lost Remembrance” demo tape from 1991. ‘Mentally Deficient’ and ‘Havoc’ both predate Acrostichon by several years, as they were re-recorded songs from United Brains, an earlier band of guitarist Richard Schouten. Next to these tracks from the band’s demo phase, ‘Zombies’ is an entirely new track detailing the band's love for horror cinema.

The usage of weeping melodies is one of the band’s considerable strengths. ‘Immolation Of the Agnostic’ fuses early death metal riffing with a clear nod to Black Sabbath’s self-titled anthem. ‘Walker Of Worlds’ sounds like a fusion of early Cathedral and Death. These melodies become especially strong when the band break into an unexpected blast part shortly after. ‘Dehumanized’ has a few moments of more throatier growling, and is more doom-oriented in construction. ‘Lost Remembrance’ is one of the most violent cuts of the record. ‘Zombies’, the sole new track on the album, is far more fluent in its transitions and possesses the widest dynamic range of all songs present. ‘Relics’ was named ‘Germinant Malefaction’ in an earlier incarnation. By and large “Engraved In Black” is a commendable cross-section of the band’s demo phase along with a new track.

One of Acrostichon’s most characterizing virtues was its unparallelled dynamic range, clever choices in song arrangements, and Corinne’s monstrous growl. Nobody in the Dutch death metal scene fused burly death metal, robust doom and pumping grooves as elegantly and convincing as they did. To top it all off the record exudes a sense of traditionalism in its thrash accelerations, and its nods to Black Sabbath. This happens most prominently in with the opening riff to ‘Immolation Of the Agnostic’, an obvious tribute to Black Sabbath’s legendary self-titled metal anthem. The majority of Acrostichon’s material sounds like early Death (“Leprosy”) and Incantation (“Onward to Golgotha”) with the occassional cavernous doom section. The vocals of Corinne van den Brand weren’t the deepest, or the most guttural - not even by 1993 standards - but her emotive delivery made them far better than the faceless grunters of the day.

“Engraved In Black” was recorded at R.S. 29 with death metal producer of the day Colin Richardson producing and Oscar Holleman engineering. As standard for the time the record comes with a crunchy guitar tone, thick oozing bass licks, and a commanding drum sound that was typical for the time. The earthy production is quite similar to that of Deicide’s self-titled debut, albeit that the tones are a lot murkier here. The handpainted artwork by Richard Schouten is often a point of contention but it fits the album wonderfully well. The album was released through French label imprint Modern Primitive in 1993 after close to a year of delays and setbacks. The record was re-released in 2013 on LP format with new (not necessarily improved) artwork and bonus demo material through Czech label imprint Doomentia Records

Had “Engraved In Black” been released in a timely manner and on a bigger label imprint its impact on the scene would have been significantly bigger. By the time Acrostichon released its debut Gorefest had released the positively enormous “False”, and was a year away from the divisive “Erase”. Sinister had released the stylistically similar but more demonic “Diabolical Summoning” the same year. That the record doesn commit itself to any specific subgenre is both its strength as its weakness. It doesn’t push itself quite as far as any of first two Dead Head albums, neither does it pigeonhole itself as purely death metal, and it is far too dynamic to be considered an early death/doom variant. “Engraved In Black” is all three at once, and its ambiguous nature probably explains why the record never found a wider audience, even within the death metal scene.