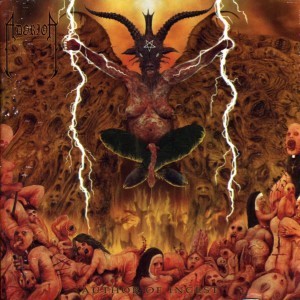 After a seven year long absence British underground metal unit Adorior finally graced the world with another album. “Author Of Incest” is everything “Like Cutting the Sleeping” was, but taken to a new level of extremity. This new album is a good deal faster, and more straightforward black metal oriented compared to its predecessor – but the elegant mix of death-, black – and thrash metal remains thankfully identical. The band is still centered around significant others Melissa Gray (vocals) and Chris Hastings (bass guitar) - and they have assembled a number of musicians around them that perfectly fit the Adorior vision. “Author Of Incest” is a lot more conventional than its predecessor, but it also tops it in terms of blasphemous imagery, lyrics and music.

Since more than half a decade passed since the last outing Adorior went through of changes, not in the least in terms of membership. “Author Of Incest” forms the recording debut for the second line-up, consisting of guitarist duo Tony Brewer and Tomasz Dziubich (who was originally from Gdynia, Poland but currently resides in London, UK) along with drummer Dani Ben-Haim. The second and more major change is that Adorior has traded in its genre-fusing quirkiness for a more streamlined and typical, but not less violent, sound. When it comes right down to it “Author Of Incest” sounds a lot like “Hammer Of Gods” and “Exterminate” Angelcorpse but with more pronounced Scandinavian black metal riffing. There’s a greater focus on blistering guitar solos this time, which is a step up from the otherwise very elegant “Like Cuting the Sleeping”. 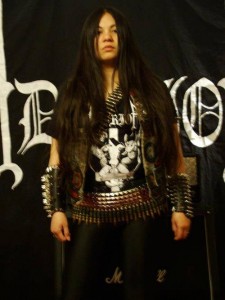 One of the more important selling points of “Like Cutting the Sleeping” was frontwoman Melissa Gray’s versatile vocal acrobacy. In the blink of an eye she went from sultry and seductive to ferocious and bloodcurdling, often within the same song. None of this happens on “Author Of Incest”, as the band has made it its mission to be as violent and over-the-top as possible. Gray exclusively focuses on her grunting and serpentine rasping styles, forgoing the more emotive cadances she used prior. Not only does this break with the band’s impressive standards of the past, it shortsells the material that is otherwise the most intense the band has penned to date. It is unclear why Gray decided to limit her vocal cadences as much as she did. There’s no ‘Beyond the Distant Blue’ on this record. For somebody who is as vocally versatile as she is, Gray is certainly limiting herself here. I’ll concur that it fits the material, but it isn’t nearly as engrossing as the truly devilish vocal diversity she displayed on “Like Cutting the Sleeping”. It helps in conveying a sense of morbidity and misanthropy, but shortsells the album otherwise.

Everything is more over-the-top than before, but it comes at a considerable price. The more conventional writing style doesn’t allow Hastings the freedom of the previous record. The thrash – and traditional metal leanings have diminished in favor of a blasting Norsecore style. The drumming, while technically more refined, is rather one-dimensional and doesn’t nearly have the character it had when Elvidge sat behind the kit last time around. What Adorior wins in terms of overall extremity it loses in recognizability, spirit and character. “Like Cutting the Sleeping” didn’t sound like any other band at the time, “Author Of Incest” is far more conventional and not nearly as adventurous as its individualistic and quirky sounding predecessor. Even the overtly Satanic artwork by Paul McCarroll is reminiscent of other bands. Compare this art to the Joe Petagno canvas used for Unlord’s 1997 “Schwarzwald” debut album – Adorior was once different from all other bands in the genre, here they are content to follow what others did before them. Despite these negatives “Author Of Incest” is still leagues better than the drivel that has come out of the global war-metal scene in more recent times.

For the first time Adorior convened in a studio outside of the United Kingdom. “Author Of Incest” was recorded on 24th December 2004 at Necromorbus Studio in Sweden. This was probably done to preserve the authenticity, feeling and integrity of the music. Over the time that Adorior was away Necromorbus has become the mecca for underground metal bands, death – and black metal in particular, who want to avoid the plastic sterility and digital soullessness of more popular facilities such as Studio Fredman, Dug Out or Abyss Studio. The album was released through Polish label imprint Agonia Records in 2005. While not nearly as quirky as its debut from 7 years prior Adorior prove to be an important pillar in the underground despite the concessions made on this record. The album delivers what it promises, and that is in and of itself admirable – as is the band’s consistency despite the fluctuating lineups from album to album. In all “Author Of Incest” is a more than commendable return for one of Britain’s more underrated death/black metal institutions. Hopefully they’ll return sooner rather than later.