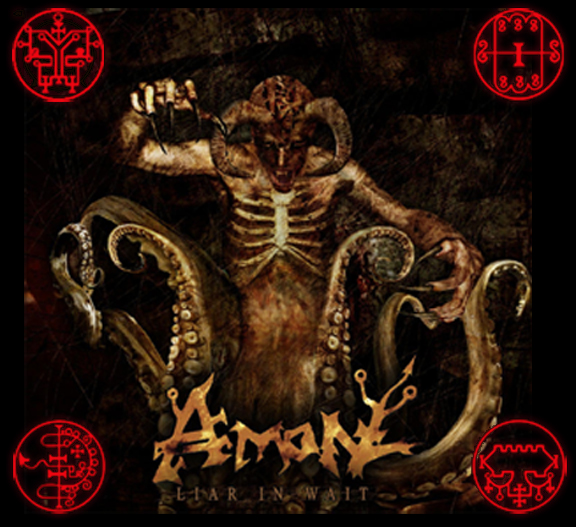 The story of Deicide is one of the most banal in metal history. After starting off with the promising self-titled debut, and following it up with the intensely savage, abstractly technical and loosely conceptual “Legion”, the band had delivered two classic death metal albums. It isn’t very surprising that the band fell into a rud afterwards, releasing competent but unremarkable records with the likes of “Once Upon the Cross” and “Serpents Of the Light” before finally descending into mediocrity and irrelevance. In 2004 the band briefly resurfaced with the so-so sounding “Scars Of the Crucifix”, after which an interpersonal meltdown split the ranks in half, exiting the Hoffman brothers. 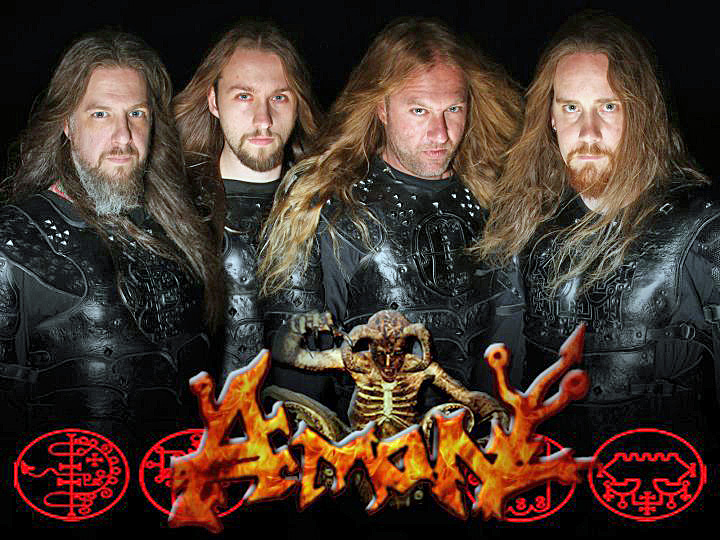 Since their unceremonious exit from their most known project, the Hoffmans set on to resurrect their original band, Amon. Only in 2007 would the Amon line-up consolidate, with the addition of vocalist/bassist Jesse Michael Jolly and drummer Mike Petrak.  “Liar In Wait”, the long awaited and eagerly anticipated debut, would finally see the light of day in 2012. With an incubation and gestation period this long, the question on any sane person’s mind is: was this album worth the wait – and are the brothers able to one up their former band mates in Deicide? The answer to that is twofold; yes they are and no, they aren’t.

For starters, Amon has an interesting concept in the sense that it deals with alien lifeforms, abstract cosmic themes and New World Order type subjects. The lyrics are interesting to read, and are leagues better than the Satanic claptrap that Deicide are still peddling. Now having said that, the record certainly isn’t without its faults. Given the brothers’ background and an album title as “Liar In Wait”, it isn’t really that hard to imagine that people come into this expecting a Deicide retread. While the comparison holds up musically, conceptually Amon is entirely its own entity. That is to say, it is for the most part. Tracks such ‘Liar In Wait’, ‘Spat Forth From the Darkness’ and ‘Lash Thy Tongue and Vomit Lies’ appear to be, at least in part, holdovers from the Deicide days. The lyrical focus is abstractly anti-religious with a light sci-fi angle. In fact, they are more closely tied to a Deicide track as ‘The Truth Above’ than to any other Amon originals.

From a musical perspective, Amon is what Deicide was in their better, more brighter days, albeit it in a decidedly low profile manner. The album was recorded at Redroom Recorders with producer Mark Prator (Iced Earth), and while it is far from terrible, it does lack that extra layer of gloss and smoothness you’d reasonably expect from musicians of this caliber. The thing is that the record sounds surprisingly good for an entirely self-financed product, but that’s about it. My biggest qualm with this record is that the guitar tone, for however heavy and thick it is, isn’t the clearest and extra clarity and definition would have helped a lot. The same could be said about Petrak’s drum tone. The kickdrums and cymbals sound good enough, but the snare drums and toms sound hollow and aren’t exactly the embodiment of a worthwhile drum production. At least they sound organic and natural, I’ll give them the credit due for getting that right.

Which brings me to the next point of the performances and writing. Brian and Eric noticeably have changed little in regards to their style. The most obvious influences are still Slayer and Possessed, but with Amon their palette has certainly broadened. In terms of leads/solos, the brothers are similar to neo-classical shredders such as Ralph Santolla, Dave Suzuki and John Li. In comparison to those they are surprisingly restraint and not nearly as overindulgent and excessive, which is a welcome breath of fresh air. I can’t say a lot about Jolly’s bass playing because it is inaudible most of the time. It would be interesting to hear him popping away, given the amount of strings his instrument has. Unfortunately he is buried deep beneath the all-encompassing guitars. Petrak’s work behind the kit is fairly non-descript and quite straightforward, he isn’t going to be mistaken for Inferno (Behemoth), Mike Smith (ex-Suffocation), Lee Harrison (Monstrosity), Alex Hernandez (ex-Immolation, Fallen Christ) or Leon Macey (Mithras) anytime soon. If anything, his brand of playing is closer related to Aantar Lee Coates from Tampa stalwarts Diabolic and Unholy Ghost fame. 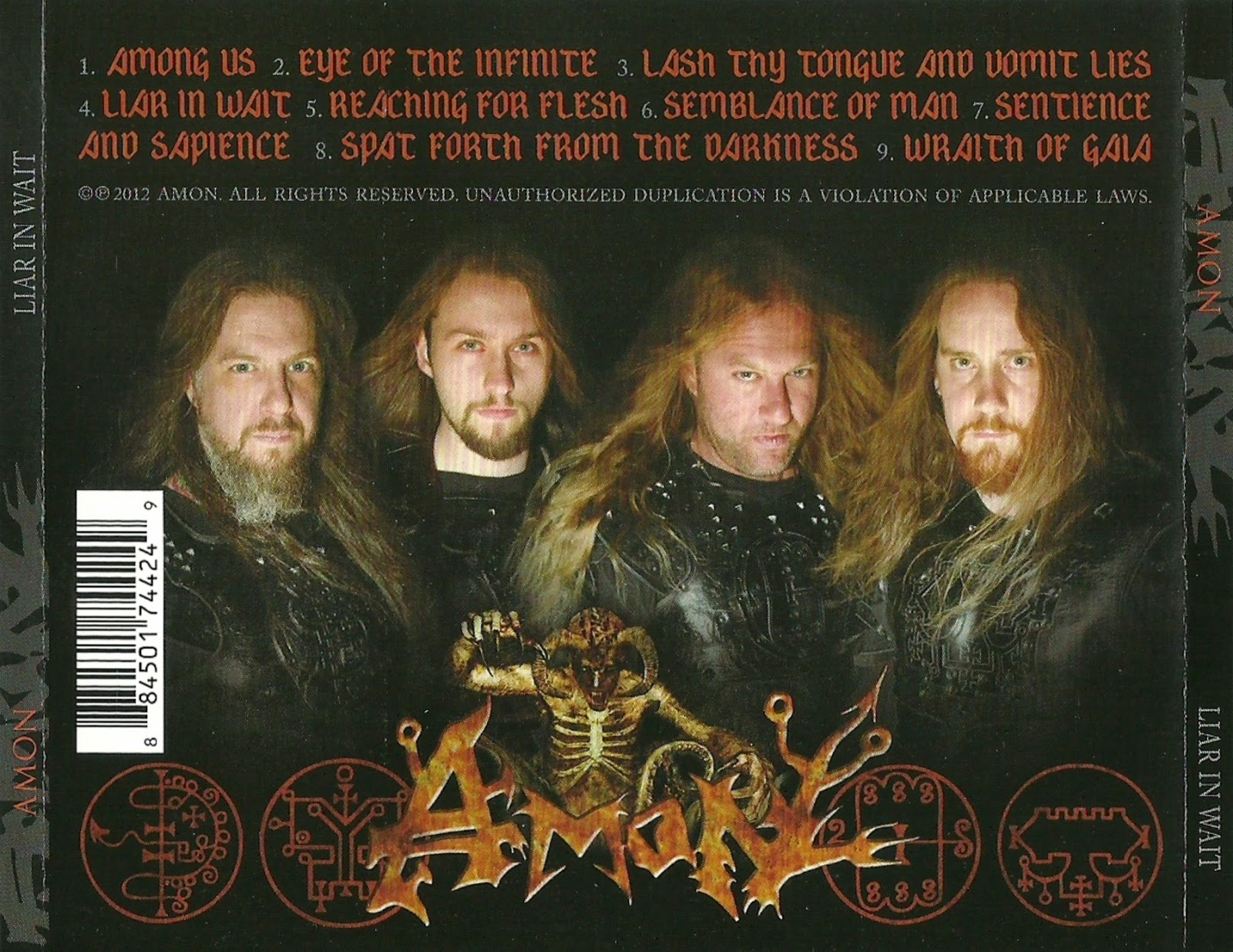 Although the cover artwork looks a budget version Doom clone, the design and lay-out are competent and well-handled. Each band member is represented by a unique sigil and the photography is stylish and without excess. Just like the artwork and presentation reek of ‘90s nostalgia, so does the music. Nothing ever comes as a surprise, and while the album is competent in its own right, it doesn’t really do much to advance the brothers’ status or profile. They play faster, and the leads/solos are more ambitious than the Deicide days – but how much is that saying exactly? That they got better? After 25 years they better be. In closing, “Liar In Wait” is exactly what you think it is. This is Tampa, Florida death metal with no strings attached and no new ideas to speak of.

This isn’t the second coming of “Legion” (more like a contemporary interpretation of “Serpents Of the Light”, if anything else) or a breakthrough record on the level of “Dechristianize”. No, far from it. If anything, this album merely consolidates the brothers’ work of the past, and gives them a platform to continue delivering the brand of extremity that they are known and loved for. The Hoffman brothers have proven that they still can deal the damage as good as, if not better, as the younger generation. The real question is: do we, and the scene in general, need them still?