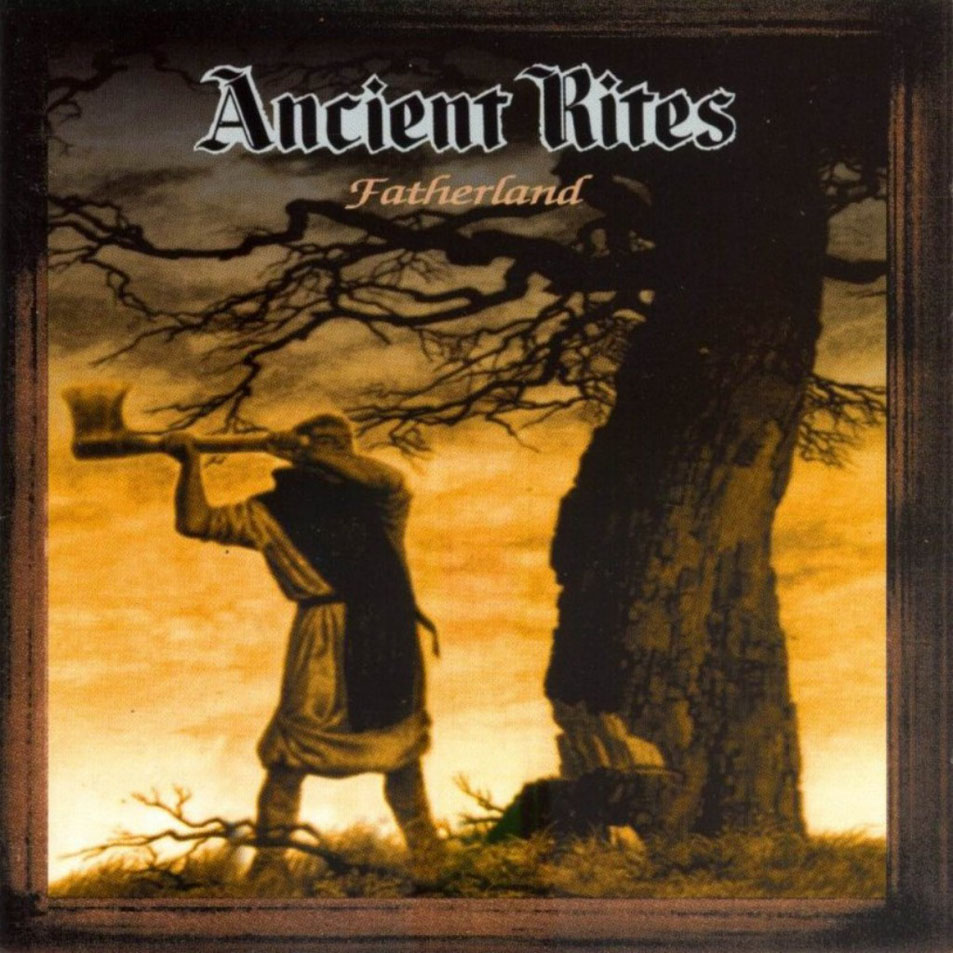 After two more underground sounding albums Belgian black metal combo Ancient Rites underwent somewhat of a stylistic transformation as its line-up became trans-European. “Fatherland” is a transitional chapter for the band as the record sees the induction of international guitarist duo Erik Sprooten (previously of Dutch speed/thrash metal band Inquisitor) and Jan Yrlund (of long-running Finnish thrash metal act Prestige). Along with a wider array of vocal styles used by Gunther Theys, it is the band’s progression into more traditional - and power metal territory, and steadily away from the crude death/black metal of the past. Moving into the opposite direction of the first two albums “Fatherland” prominently incorporates atmospheric interludes and has an increased keyboard presence that greatly enhances the medieval feeling the band aims for. 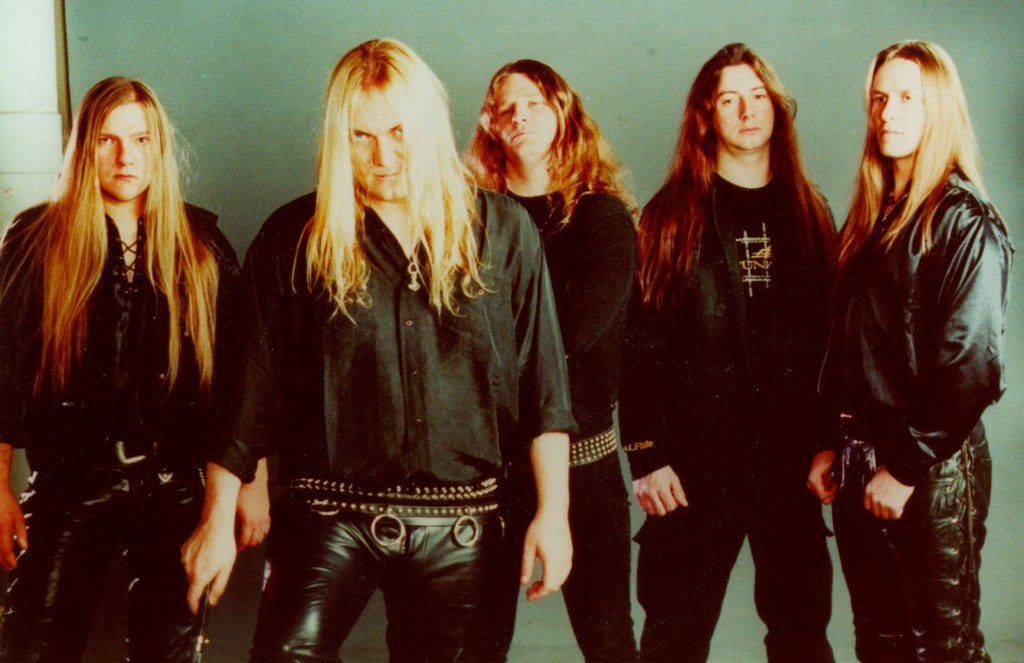 For the first time in the band’s history they had two guitarists replacing the defected Bart Vandereycken. Debuting on “Fatherland” are Dutch guitarist Erik Sprooten and Finnish guitarist Jan Yrlund. In comparison to the wholly death metal, and very angular riffing style of Bart Vandereycken, the duo is more fluid and power metal influenced. A greater prominence of traditional metal solos is a notable improvement compared to the rather sparse nature of the preceding two records. The improved guitar work also gives drummer Walter van Cortenberg more to work with and that results in a spirited performance on his end. The songs themselves aren’t necessarily longer, but they are more dynamic in composition, and atmospherically richer than those of the preceding two records. The expanded dynamics along with a more varied and versatile vocal performance by frontman/bass guitarist Gunther Theys, and the continued linguistic expansion make “Fatherland” a more nuanced and sophisticated effort all around.

The lyrics reflect the musical transformation as they deal with ancient European history, folklore and mythology instead of the Satanic and occult sentiment that was the central thematic on the previous two albums. ‘Avondland’, the nearly minute and a half long intro track, derives its title from the Fenician name for the olden European continent. ‘Aris’ is about ancient Galicia, specifically Eburones warlord Ambiorix who resisted the forces of Julius Caesar during the 19th century. ‘13th Of October 1307’ is details the systematic elimination of the Knight Templar and its Order by King Phillip IV of France. ‘Fatherland’ is a celebration of the band’s homeland Belgium in the cultural sense, while ‘Rise and Fall (Anno Satana)’ is about key events in warfare and conquest during history. ‘The Seducer’ is a vastly reworked interpretation of the song ‘Fallen Angel’ from the band’s 1990 “Dark Ritual” demo tape. It is the second of two instances wherein Ancient Rites would re-use said track to thematically tie its albums together. The track features guest vocals by Impaled Nazarene frontman Mika Luttinen. As mentioned previously the anti-religious sentiment is still present through out these lyrics, but it is less confrontational than it was on this band’s earlier records. The air of intelligence, sophistication and worldliness is exactly what makes Ancient Rites leagues better than its contemporaries of Enthroned who mastered goofy end up the spectrum at this time.

There’s an increased presence of atmospheric synthesizers and medieval sound embellishments courtesy of producer Oliver Philipps that greatly add to the aura of “Fatherland”. While these keyboards and synthesizers add wonderfully to the intended epic medieval atmosphere, they also tend to be overbearing and, at worst, unnecessary. Each of these songs works perfectly on their own merits without them. Where the past two records were suffocatingly dark and morbid affairs, “Fatherland” – mostly due to its increased production values and keyboard presence – is anything but. “Fatherland” is atmospheric above all else, and even lighthearted with its playful galloping riffs and medieval melodies. The only thing that roughly classifies as black metal is Gunther Theys’ serpentine rasp. The riffing is steadfast of the traditional -, thrash – and power metal variety – and Ancient Rites only blast sparsely when it fits the moment, and the song. The midtempo allows the songs to breath more, and puts focus squarely on the engrossing melodies and nuanced guitar work. As with “Blasfemia Eternal” there’s additional instrumentation to be found. Returning once again is session studio flutist Ellen van Wauwe on ‘13th Of October 1307’ and there are more piano melodies. ‘Season’s Change (Solstice)’ starts out with a very tasteful acoustic section. Like the two albums preceding it “Fatherland” and its successor are tied together through the usage of a recurring melody first heard here in the minute and a half long intro ‘Avondland’.

For the first time Ancient Rites recorded at Spacelab Studio, Germany with producers/engineers Oliver Philipps and Christian Moos with Jan Yrlund co-producing. “Fatherland” comes with an overly polished digital production that sacrifices bottom-end heaviness, crunch and weight for modern sheen, sterility and depthless clarity. The bass guitar, a sturdy but unremarkable presence on previous outings, can be made out but it is often buried under the crunchy guitars and keyboard flourishes.  A bass guitar tone such as on “Symbolic” by Death, or as on “Utopia Banished” by Napalm Death would have worked wonders for this record. The drum production is a mixed bag with the toms and snares sounding clean whereas the kickdrums are utterly impotent and reduced to mere typewriter clicks. While the various parts of the drum kit sound better than before they don’t sound very commanding. Couple this with the adequate but often buried bass guitar tone “Fatherland” sounds pristine but also kind of flat. The lack of any concrete bottom-end heaviness, either through usage of a more pronounced and weighty bass guitar or massive kickdrums, robs the effort of its intended visceral impact.

Complementing the improved musicianship and more ambitious compositions are more striking and better realized visuals. In terms of photography and layout “Fatherland” is a step up from the times of “The Diabolic Serenades” and “Blasfemia Eternal”. For this session the artwork was taken from a canvas by Belgian painter Jean-Léon Huens. Huens’ art was already commissioned earlier on “Blasfemia Eternal”, but Huens artwork fits seamlessly with the band’s historical and ancient Europe concept. “Fatherland” is a commendable return for a band that underwent a major line-up change. Its subsequent stylistic transformation is pulled off far more gracious than most. Even though this is a farcry from the previous two albums “Fatherland” offers a wider palette of styles and sounds – and even the overwhelming keyboards have their charms. At this point Ancient Rites had become an epic traditional metal band, and their sound had become so much more powerful and engrossing in spite of losing the violent underground charm of its early phase. As a transitional record “Fatherland” sees the successful transformation of a crude death/black metal trio into something altogether more interesting. Despite the lyrical and musical changes Ancient Rites lost none of its character, which is never evident when a major line-up shift occured as was the case with this record.