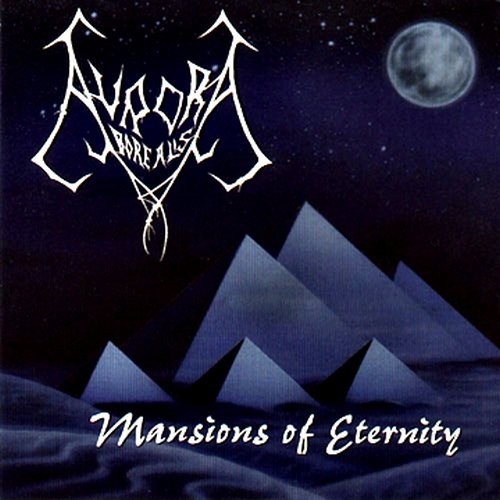 One of the US most underrated death/black metal acts surely must be Maryland-based Aurora Borealis. The band’s beginnings can be traced to Atlanta, Georgia metal band Lestregus Nosferatus, who formed in the mid-to-late 1980’s. The band is centered around producer/engineer Ron Vento (vocals, guitars, bass, keyboards) and a pool of session musicians. While the band initially cut a rough demo at a rehearsal studio in Atlanta, Georgia it was the Morrisound produced “Mansions Of Eternity” that became its first true calling card. Dealing with Egyptian subject matter lyrically, and having Puerto-Rican skinsman Tony Laureano (later of Angelcorpse, Malevolent Creation and Nile) behind the drums it is an often overlooked but vital part in the Aurora Borealis catalog. The EP is a majestic platter of European death/black metal that is melodic, technical and truly epic sounding in parts. It is the template for all of the band’s later recordings.

“Mansions Of Eternity” comprises of three new tracks, and two re-recorded tracks from Vento’s previous outfit. The three new tracks display a greater understanding of what the older demo tracks sought to accomplish. The standout tracks of the EP are ‘Weighing Of the Heart’ and the refurbished ‘Slave to the Grave’. The former for its overall intensity, crunchy rhythms and restless drumming while the latter is remembered for its highly atmospheric sounding keyboard intro with chilling chiming funeral bells. The ominous 80-second intro section to this track is the definite high water mark of the EP. There are some superficial similarities with Cenotaph track ‘Tenebrous Apparition’ (from the 1992 “The Gloomy Reflections Of Our Hidden Sorrows” demo tape) in its usage of minimal keyboards, but the Aurora Borealis song sounds more controlled and elegant in its construction. All of these three new tracks are significantly more diverse in their dynamic range, with winding song structures, refined and technical playing from all involved and compelling time changes to keep them interesting through out.

As a prelude to the antiquity they would explore later “Mansions Of Eternity” is about Vento’s fascination with primordial Egypt. The EP more or less follows the events that happened to a fallen royalty. ‘Crowned With Embalment’ details the principles and practices of mummification. ‘Weighing Of the Heart’ deals with the titular event wherein the heart of the deceased is weighed upon scales before Osiris, the god of the Dead and afterlife, and Thoth, the deity of wisdom. ‘Valley Of the Kings’ explains the history, and purpose of the valley located on the west bank of the Nile. ‘Slave to the Grave’ and ‘Sixteenth Chamber’ don’t fit the Egyptian motif of the preceding tracks but flow seamlessly with them otherwise. Both were re-recorded cuts of Vento’s previous death/black metal band Lestregus Nosferatus, who were based out of Atlanta, Georgia.

While the songs generally are played at a steady midpace the band already integrated blast-parts, a stylistic element which would become more prevalent a few years down the line with the arrival of Krisiun and Hate Eternal. In comparison to a lot of vocalists at the time Ron Vento’s vocals are more serpentine and rasping linking them more directly to the emerging second wave Scandinavian black metal sound of the day. The leads/solos are of the Chuck Schuldiner variety in the sense that they are emotive and in service of the song, and not showy or excessively technical for their own sake. That the band’s sound would be mimicked wholesale by Floridian unit Order Of Ennead years later is testament to the music’s enduring legacy, and its impact on the American scene.

The EP was recorded as a duo at the hallowed halls of Morrisound Studios in Tampa, Florida in 1996 with sound guru Scott Burns producing. For this outing vocalist Ron Vento handled lead, rhythm and acoustic guitars along with playing bass guitar and keyboards. Tony Laureano had only done a demo recording in 1993 with local Tampa death metal act Ashtaroth before being enrolled in Aurora Borealis. Based upon his performance on this EP he would later secure prestigious recording – and touring opportunities with institutions as Acheron, Angelcorpse, Malevolent Creation and Nile. History would note that Laureano had the entire EP worked out and rehearsed in a week’s time. Aurora Borealis was different from most American bands at the time as their lyrics didn’t deal with the usual subjects of gore, horror or occultism. Like German band Apophis, and fellow American units Nocturnus and Nile they were more interested in history, mythology and ancient cultures, in this case Egyptian antiquity. The artwork by Jay Marsh reflects this as it depicts a number of gargantuan moonlit pyramids during nighttime. As a prelude to its corresponding debut “Mansions Of Eternity” forms the ideal introduction to Aurora Borealis as it merges its past with its immediate future.