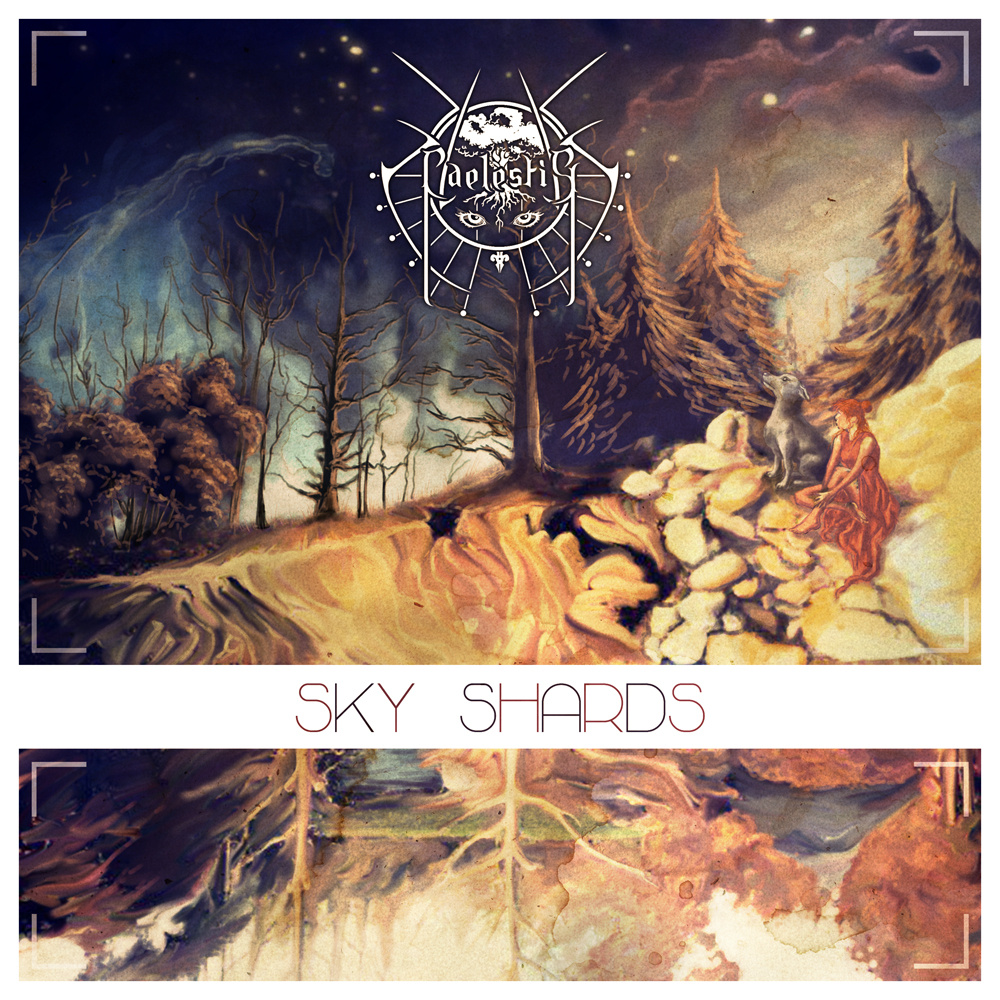 The first Caelestis album is vastly different from what the band would become just a few years down the line. It was started in 2009 as a solo project of Italian multi-instrumentalist and songwriter Cataldo Cappiello. Caelestis is an alternative way of writing ‘celestial’ which means in, or of the heavens - and in a more figurative sense it stands for ‘divine’ or ‘godly’. In its substantive form it refers to a deity. “Sky Shards” is a compilation album of unpublished material, deleted colloborations, non-accepted soundtracks, and songs unfit for a typical Caelestis release. For the most part this is a tranquil and relaxing ambient lounge record. It is isn’t pure lounge, nor pure electronic music nor an ambient soundtrack – it is all three, and its greatest strength is how breezy and accommodating it is.

From a pure pop standpoint “Sky Shards” is both exhilarating and demanding. It is exhilarating in how it goes about accomplishing its goal. The songs flow seamlessly into another, the moods change as the songs progress and Cappiello’s versatility as a songwriter, even within the limited scope of ambient lounge, can instantly be noticed. However while none of the songs are unconventional in any shape or form as far as structure or pacing goes; the album’s more flowing, breezy, tranquil architecture make the songs less appealing to traditional pop audiences. Neither would that kind of typical verse-chorus structure have worked with songs like these. The absence of vocals is beneficial to these tracks as the melodies and programmed percussion are more than enough to carry these songs. All the music on “Sky Shards” was written by sole member Cataldo Cappiello. The album is surprisingly diverse in its influences, and while the album is upbeat and light-hearted overall, it never becomes saccharine or syrupy.

Most of the material is quite reminiscent of early Enigma (without the soothing female vocals and Gregorian choirs), Jean-Michel Jarre and the more atmospheric works of Danish artist Jesper Kyd. “Sky Shards” is an album with no real strong structure, as it is a free-flowing breezy record that invests more in atmosphere than in conventional pop or rock song format. All songs are equally strong, but it is in ‘Shard III’ that Cappiello’s interest in electronic music surfaces more prominently. Arriving mid album it serves to set up the following song. ‘Shard IV’ is a touching piano ballad, something the band would capitalize on heavier with this album’s successor. ‘Shard V’ is more of a guitar-oriented reprise of the preceding track’s central melody from which the rest of the song is based. In the latter half of the song an electronic beat arises, but it never pushes itself to the forefront. ‘Shard VI’ could have been culled from any of the famous big brand lounge compilations, be they Buddha Bar, Café del Mar or Luxury Lounge.

Going from the sound of “Sky Shards” you wouldn’t say this record was written by one person exclusively. Not being limited by genre, convention or instrumentation the album chooses whichever tools works best to get its intended point across. Each track is part of the journey, and listening the album as a whole is the recommended way to experience it to the fullest. The pensive atmosphere is present in each of the tracks, but each one is about a different facet of the band’s celestial sound. Mostly electronic and ambiental “Sky Shards” is only rock by proxy as ‘Shard V’ is the sole cut to feature guitar work. Cappiello excels at weaving electronic beats, ambient synthesizers and piano melodies in atmospheric, dreamy tracks that stay well within manageable song lengths. Hopefully there will be a continuation of the sound presented here some day. The Cynerea project is the darker alter ego of this era of the Caelestis sound, and while chanteuse Vera Clinco wouldn’t arrive until a few years later, it makes one wonder what she could do when given flowing, dreamy material like this to sing over. One can only dream….

“Sky Shards” is an album about atmosphere, and the fact of how quick it breezes by in buoyant, ethereal fashion is proof of Cappiello’s excellent vision for this compilation. As this is a complication of supposedly unrelated works one is hardpressed to identify them as such. All songs fit the thematic, and each song flows seamlessly into the next without any hiccup or flaws to speak of. The absence of vocals makes these tracks all the more powerful, as vocals would have distracted from the melodies and breezy atmosphere. The minimal percussion is used sparsely, and all the songs are more based around washes of ambient synthesizers, soothing piano melodies and light guitar riffing. All elements that would come to define Caelestis later pop/rock oriented material are already accounted for. In retrospect it is strange that Cappiello decided to abandon the ambient/lounge sound he perfected here for a more traditional pop/rock format. As it stands “Sky Shards” is an excellent starting point in the Caelestis discography.