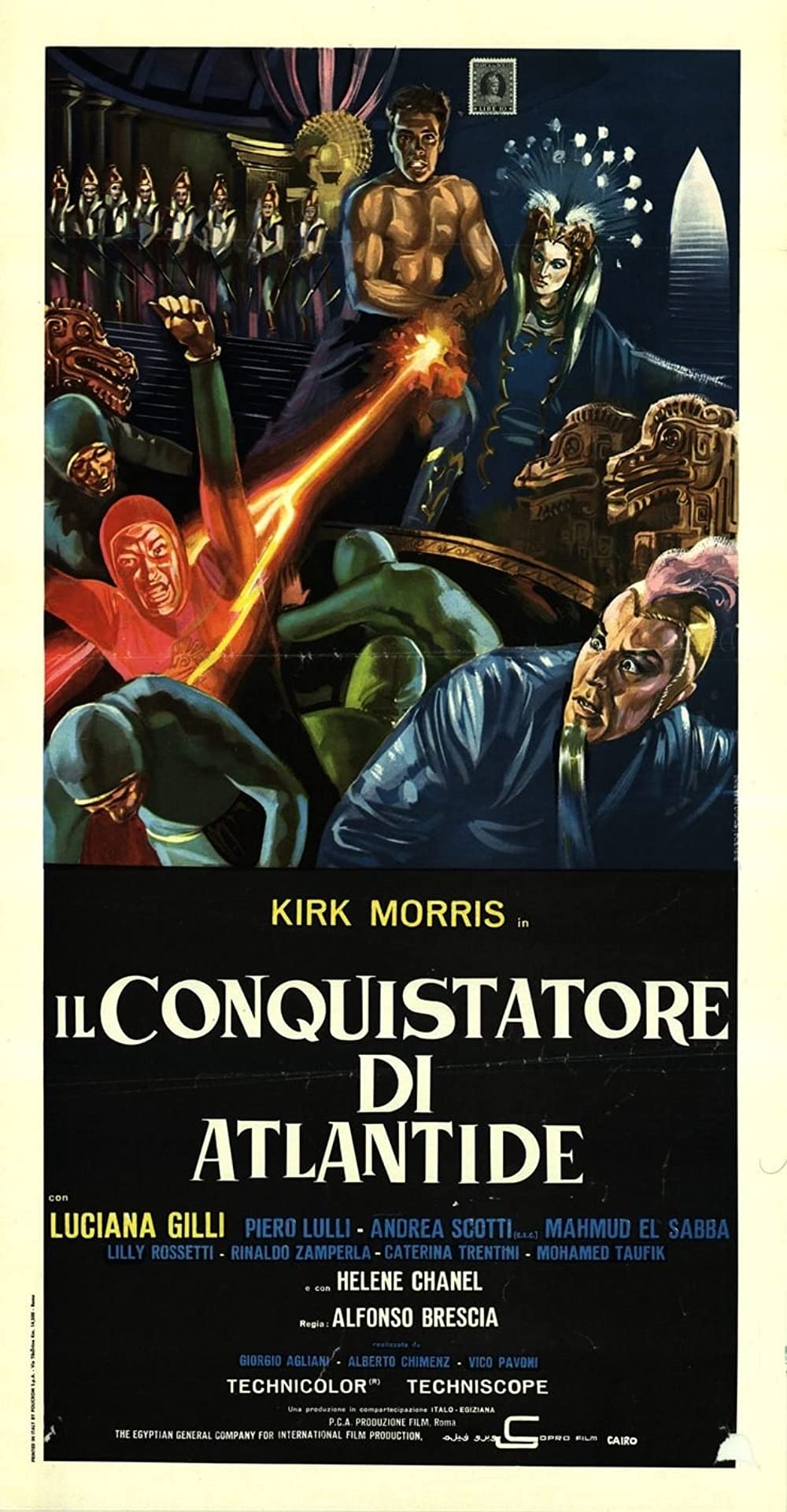 Plot: Hercules battles the forces of Atlantis to free a member of nobility.

History has been perhaps somewhat unjustly cruel to Italian director Alfonso Brescia. He is often passed off as an ordinary hack in the vein of Andrea Bianchi, Bruno Mattei, Claudio Fragasso, or Joe D’Amato. While Brescia was indeed a director without much of a distinct individual style, his early filmography shows a remarkable retraint as to what would define his truly indefensible work in the 1970s. Alfonso Brescia, for all the bad things that can rightly leveled at him, was a versatile, workhorse director that tried his hand at most exploitation genres. That he is retroactively remembered for his unintentionally funny late seventies budget-starved Star Trek (1966-1969) inspired science fiction quadrilogy - Cosmos: War Of the Planets (1977), Battle Of the Stars (1978), War Of the Robots (1978), and Star Odyssey (1979) – does a disservice to his early work as a director. In the 1980s Brescia found success as a director of sceneggiata - especially the ones he made with singer/actor Mario Merola – or melodramas set in, and specific to, Naples.

As is so often the case Alfonso inherited his love for the cinematic arts from his father Edoardo Brescia, who produced three films during the 1940s and 1950s. Brescia first enrolled in production work, before moving up to assistant – and second unit director in the following years. In that capacity Brescia spent his late twenties under aegis of Mario Caiano, Giuseppe Vari, Mario Amendola, and Silvio Amadio with his earliest credits in the industry going as far back as 1957. In 1964 he had penned the screenplays for the Mario Caiano pepla Maciste, Gladiator of Sparta (1964) and The Two Gladiators (1964). The screenplays deemed functional and adequately written Brescia was finally allowed to move to the much coveted director’s chair. Following in the footsteps of his tutors Brescia cut two trite and banal genre pieces with Revolt of the Praetorians and The Magnificent Gladiator in 1964, only manifesting his real creative persona with his third feature, the peplum curiosity The Conqueror Of Atlantis. 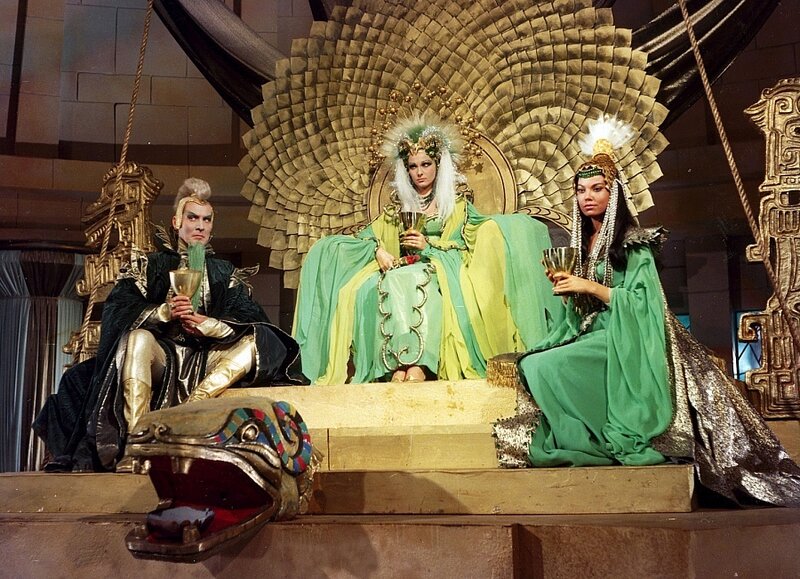 By 1965 the peplum cycle was winding down, and the genre had lost its luster and profitability. That didn’t stop producers and directors of various stripe to milk the genre for another decade on a much lower budget scale. The proof that there still was some budget to go around translates itself in location shooting in Egypt and an assortment in extras, including bellydancers, camels and nomad warriors. In that respect The Conqueror Of Atlantis at least has a veneer of respectability, even though it’s obviously a popcorn flick at heart. Whether it’s the lively pastel colors, or the Atlantean subplot lifted straight out of a 1950s science fiction movie The Conqueror Of Atlantis showcases at least a semblance of directorial prowess that Brescia would lose by the next decade. Not that The Conqueror Of Atlantis is in any way original per se. Its most direct forebear is the Reg Park peplum Hercules and the Conquest of Atlantis (1961) and The Giant Of Metropolis (1961). Hélène Chanel’s Queen Ming wardrobe and headgear obviously was meant to resemble that of Ursula Andress’ in She (1965) and Pietro Ceccarelli’s in Cold Steel for Tortuga (1965). Cinematographer Fausto Rossi - who would collaborate with Brescia on the The Amazons (1973) cash-in Battle Of the Amazons (1973) and the Shaw Bros co-production Amazons vs Supermen (1974) – is obviously no Pier Ludovico Pavoni or Mario Bava but does manage to inject The Conqueror Of Atlantis with a sense of panache, however minimal, and accentuates accentuate the bright colors and lively wardrobe palette that it busies itself with. 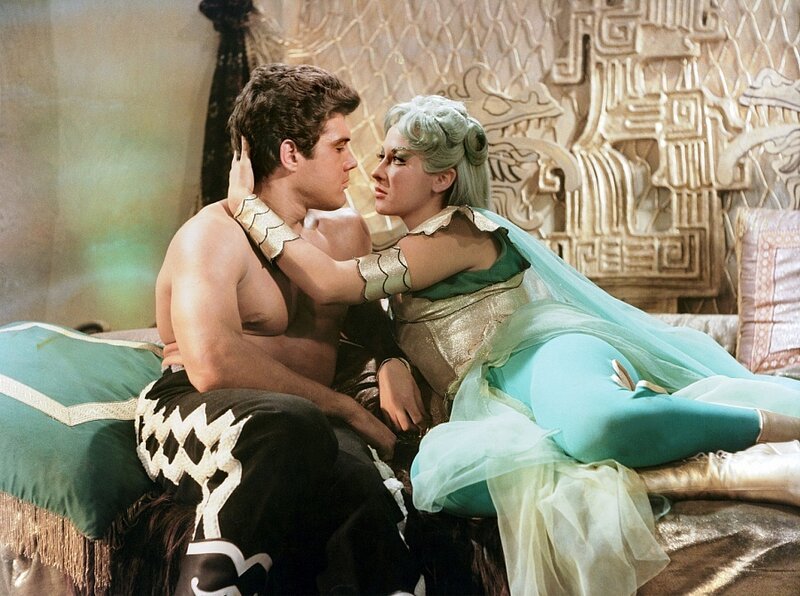 Just like The Labors Of Hercules (1958) needed a fitting strongman to fill the titular role, Brescia found his leading man in Adriano Bellini – a bodybuilder working as a gondolier on a canal boat in Venice, Italy – who was to become Kirk Morris. Morris had starred Antonio Margheriti’s Anthar the Invincible (1964), and prior to that several Maciste, Samson, and a number of Arabic variants of the peplum. Luciana Gilli had been in Ursus In the Land of Fire (1963), Sword Of Damascus (1964), Temple Of A Thousand Lights (1965), and Brescia’s spaghetti western The Colt Is My Law (1965). Hélène Chanel - one of the more frequently used aliases of French-Russian model-turned-actress Hélène Stoliaroff - was active in Italian genre cinema from 1959 to 1977. In the near 20 years that she was active Chanel amassed a respectable filmography across a number of genres. Known for her platinum blonde hair and piercing blue eyes Chanel started out in comedies from Silvio Amadio and Marino Girolami in the 1960s. In the following decade she became a fixture in peplum, Eurocrime, and spaghetti westerns. The Conqueror Of Atlantis arrived the middle of her career. Chanel and Kirk Morris collaborated on a further three peplum with Maciste In Hell (1962), Desert Raiders (1964), and Hercules of the Desert (1964). The Conqueror Of Atlantis was the last appearance of Kirk Morris and Luciana Gilli in a peplum. A fitting sendoff for both as The Conqueror Of Atlantis integrates fantasy, science fiction, and retro-future production design in what otherwise is a bog standard and banal sword-and-sandal epic. 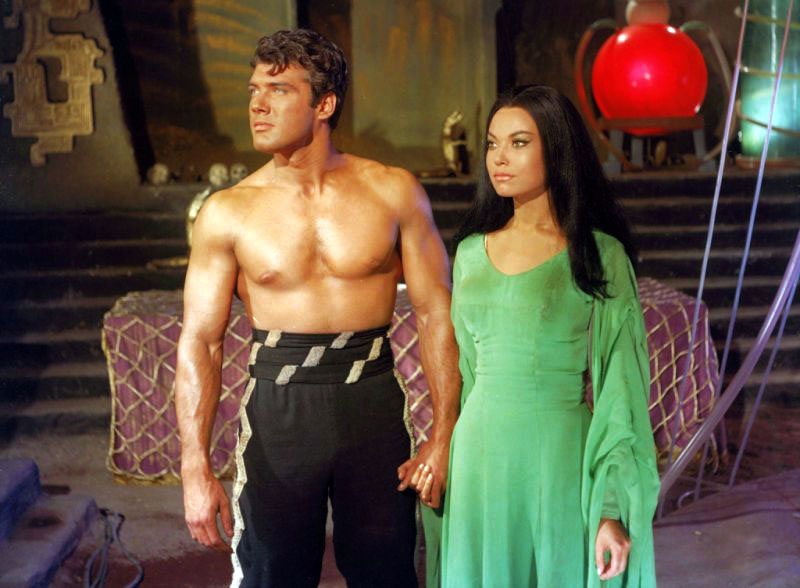 The Conqueror Of Atlantis starts out innocuously enough with Heracles (Adriano Bellini, as Kirk Morris), en route to Greece after having battled the Parthians, washing ashore in some unspecified region somewhere in, supposedly, Egypt. After being nursed back to health by one of the region’s nomadic tribes he is immediately smitten with alluring desert princess Virna (Luciana Gilli). Virna’s tribe wages war with the legions of Karr (Andrea Scotti), but both end up reconciling their petty differences in the face of a greater common enemy. As legends speak of Golden Phantoms near the Mountain Of the Dead, a threat far greater than some petty intertribal dispute looms over the arid landscapes. When forces unknown kidnap Virna, Heracles and Karr discover the last outpost of Atlantis buried deep in the Sahara Desert. Presiding over the withering Atlantean civilization is Queen Ming (Hélène Chanel), 3000-year old and dying, the evil sorcerer Ramir (Piero Lulli) and his Amazon high guards. The Atlanteans believe Virna to be the reincarnation of their very first Queen. To save Virna and humanity from certain death both men must face the horrors within the bowels of the Mountain Of the Dead, and overcome the seemingly invincible blue-clad, golden-skinned autonomous combat units, in fact fallen desert warriors, that populate the City Of the Phantoms.

That isn’t to say that The Conqueror Of Atlantis is in any way original. It is, more or less, a loose remake of the earlier and entertaining The Giant Of Metropolis (1961) with Gordon Mitchell and Bella Cortez. Not even the concept of of Atlantis in the Sahara Desert was particularly novel at this point. The Mistress Of Atlantis (1932) and Journey Beneath the Desert (1961) both precede The Giant Of Metropolis, and both are adaptations of the 1920 Pierre Benoit novel Atlantida/L’Atlantide. The Conqueror Of Atlantis follows the basic plot outline of the novel and when it doesn’t, it pilfers liberally from The Giant Of Metropolis and Hercules and the Conquest Of Atlantis (1961). There’s a sense of vitality and liveliness to Brescia’s direction that elevates The Conqueror Of Atlantis beyond mere peplum fodder. Said enthusiasm would be sapped out of Brescia’s direction by the end of the decade. If there’s one characteristic that defines Brescia’s work it’s that detached indifference to whatever project he’s helming that would truly manifest itself during his output in the following decade. The Conqueror Of Atlantis is a wonderfully quirky peplum that steals from much earlier, better properties and makes no qualms about what it is. Brescia’s third directorial effort actually showcases exactly why he was a promising Italian journeyman exploitation director initially. He not always was the inept hack he turned into as the budgets of his productions shrunk. 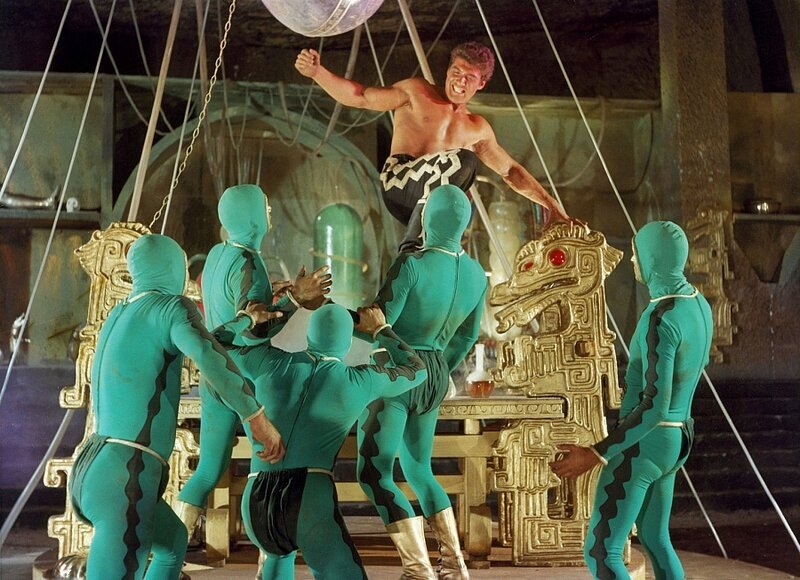 To his credit Alfonso Brescia makes efficient use of his resources. Kirk Morris was the thrift-store equivalent of Steve Reeves and Luciana Gilli was the perfect leading lady for a production that obviously couldn’t afford hiring continental belles as Dagmar Lassander, Helga Liné, Amparo Muñoz, Bárbara Capell, Sylva Koscina, or Rosanna Yanni. The producers behind The Conqueror Of Atlantis were an assembly of old veterans and new blood. Giorgio Agliani was the most experienced of the three, producing the Lucio Fulci costume drama Beatrice Cenci (1969) a few years down the line. Pier Ludovico Pavoni was a cinematographer that occassionally directed. Ludovico helmed Amore Libero – Free Love (1974) a decade later, introducing seventies soft erotic starlet Laura Gemser to the world. The Conqueror Of Atlantis was Alberto Chimenz’ second with only A Queen For Caesar (1962) preceding it. If one was to trace back where Alfonso Brescia’s peculiarities as a science-fiction writer first took root this one is a good place to start. The Conqueror Of Atlantis wouldn’t be remembered today if wasn’t for the fact that its influence was instrumental on Luigi Cozzi who would, embolstered by Brescia’s inane vision here, helm two Hercules productions of his own. It it wasn’t for The Conqueror Of Atlantis there wouldn’t be Hercules (1983) and The Adventures Of Hercules (1985). We are forever endebted to Alfonso Brescia… 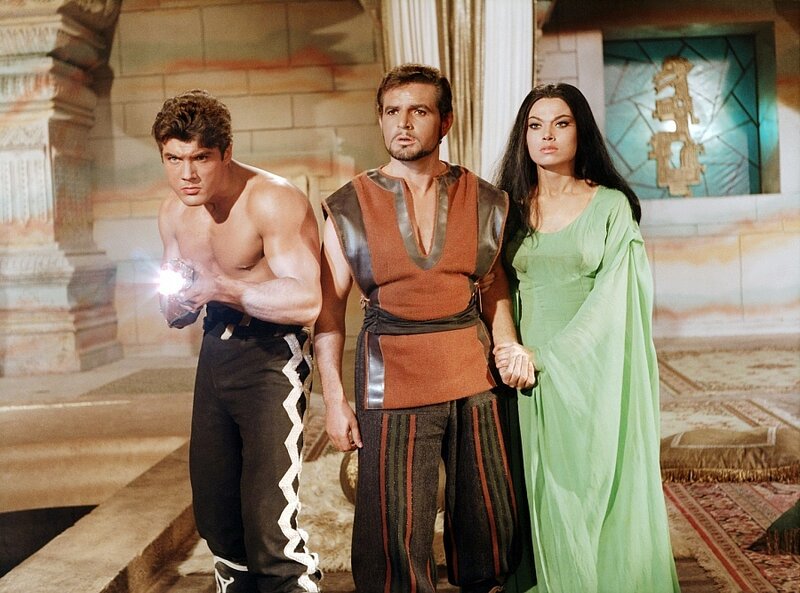 In many ways is The Conqueror Of Atlantis a prototype for his late 1970s science fiction trifecta. The Atlantean world domination scheme would be reused in Star Oddysey (1979) and the turncoat princess plot device would be return in both Battle Of the Amazons (1973) and again in War Of the Robots (1978). Likewise would be two enemies working together resurface in Cosmos: War Of the Planets (1977), Brescia’s take on Mario Bava’s vastly superior Planet Of the Vampires (1965). The golden-skinned automatons formed a crucial part of Cosmos: War Of the Planets (1977), War Of the Robots (1978), and the delirious Star Oddysey (1979), by which point Brescia had descended into unintentional parody instead of loving homage. However here he wasn’t quite at that point yet, and the hunger and enthusiasm is visible. It still isn’t a very good movie by any reasonable metric, but at least it’s thoroughly entertaining. The Conqueror Of Atlantis is probably the most enjoyable the oeuvre of Alfonso Brescia is likely to get, and it is best approached as such. It’s a delectable slice of peplum cheese from a director who would in less than a decade forth be shoveling some of the most comically inept celluloid dirt.