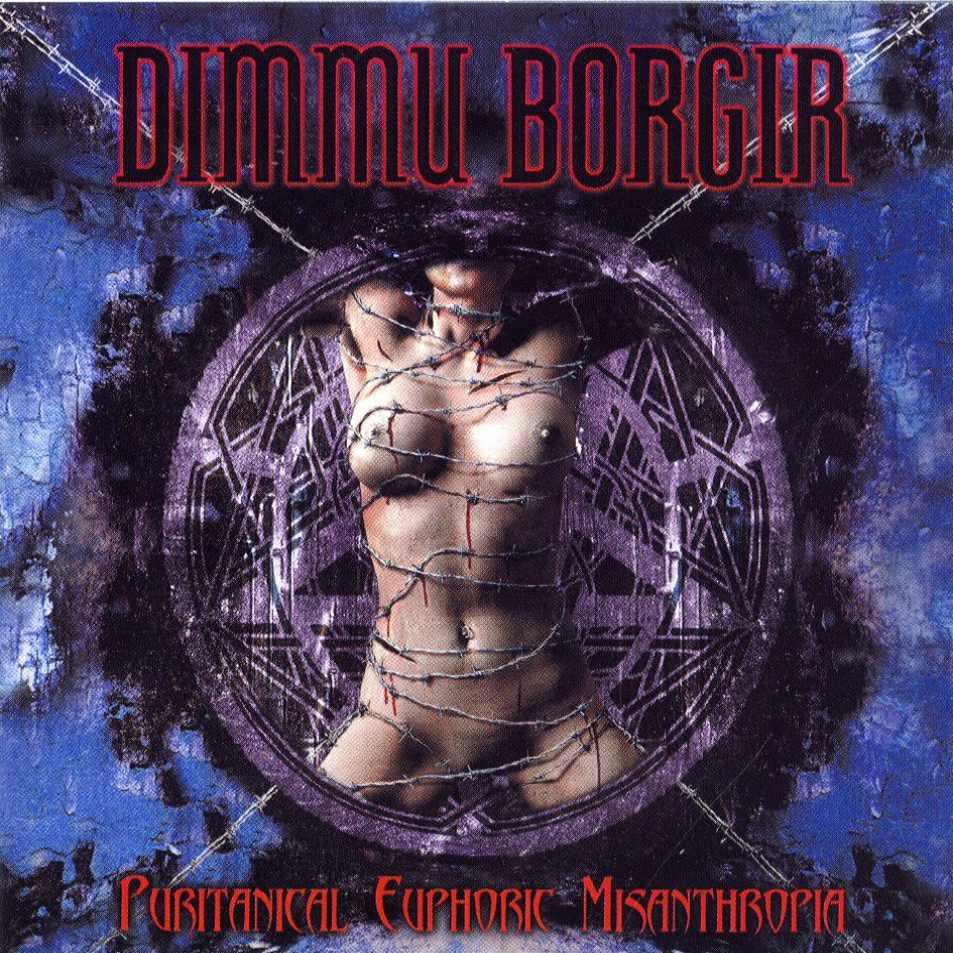 On its third record for Nuclear Blast, Dimmu Borgir was at a critical juncture in its career. The personel changes had left the band in shambles in more ways than one, the creative juices weren’t flowing as strong as they once were and a band already short on ideas was struggling to find new ones to fill an album. The masks had come off and ugliness was revealed, the foundation was starting to crack and there was no other option but to jump ship and try to salvage what was left of what they had created. Yes, “Puritanical Euphoric Misanthropia” is that album, the one were the artist completely loses the plot and goes off the deep end. Armed with a new drummer, a new guitarist and a somewhat-new clean vocalist/bassist Dimmu Borgir released this abomination. It is the third of a five-album cycle wherein the band used a three-word album title. A halfway hybrid between symphonic - and industrial metal backed up by a philharmonic orchestra. If the description sounds confused, that’s exactly what this record is.
Despite having a far more versatile drummer, a new guitarist and the benefit of actual orchestration “Puritanical Euphoric Misanthropia” just sounds better, the playing is faster, yet the drought of new ideas is more apparent now than ever. Where Dimmu Borgir’s songwriting was thin and lacking here deterioriation has firmly set in. No amount of orchestration, synthesizers and digitally processed vocals could hide that the band had made no progress worth mentioning since their previous recording. The album is mostly redeemed by its surprisingly strong first half, and outside of 4 songs this album is a retread of grounds already extensively covered on “Spiritual Black Dimensions”. The second half is inconsistent to say the least with tolerable ideas and concepts only partially completed and some outright terrible ventures into industrial territory. Yet despite all these facets working against the band at every turn this record is the go-to album for many in the band’s younger and more impressionable segment of this band’s already pimply-faced tween demographic. Inexplicably this record has fans for all the wrong reasons. I concede that everything sounds great, and the record is probably the heaviest thing the band had done up to that point – but that doesn’t make it good. The riffing has reverted back to the chugging of “Enthrone Darkness Triumphant” and Nick Barker’s acrobatic drumwork excepted - this is a dire regression on all fronts. 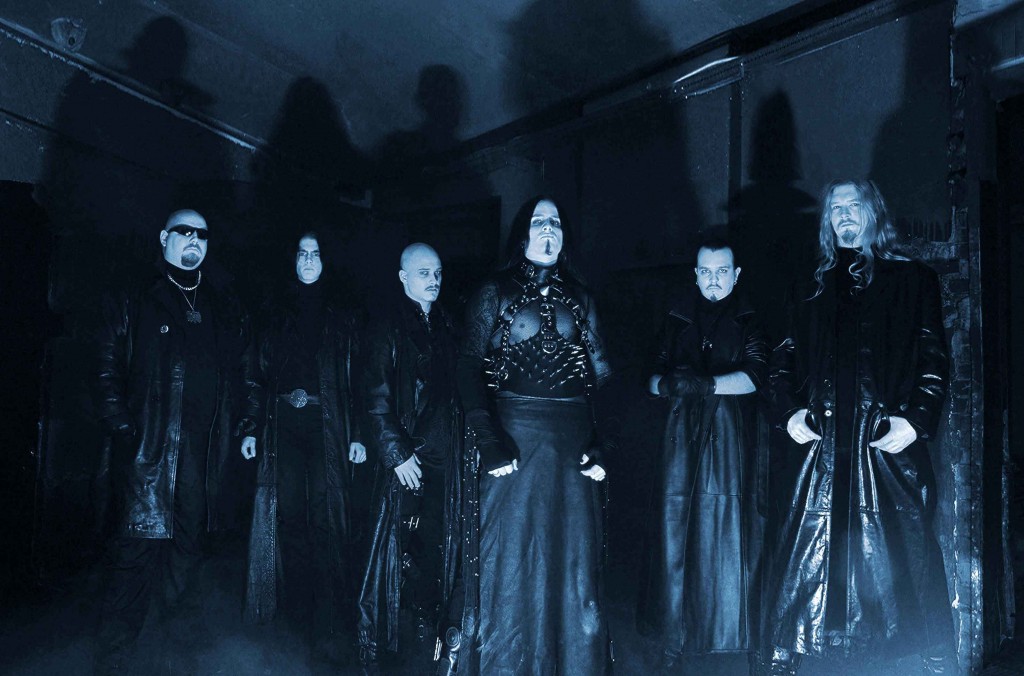 Let’s be honest for a minute here. Strip this band of its overblown synthesizers and orchestra, and what you have left is a middling, subpar melodic death/thrash band with an abundance of swagger but no idea to speak of. No matter how deep the band hide their chugging and staccato riffing under layers of digital gloss, the riffing here isn’t anything but mediocre and repetitious. At least Demon Burger hasn’t decided to excise the lead/solo work that made “Spiritual Black Dimensions” tolerable. Yes, there’s a new guitarist, Galder from Dimmu Borgir tribute act Old Man’s Child, and yet his presence doesn’t result in any new type of riffing, or more exciting variations of existing riffing. Why go through the trouble of bringing in a new talent with a new style, when you can just hire a local imitator whose very career exists mimicking doing what you did earlier? It makes perfect sense that Demon Burger hired Galder, since the best way to get rid of competition is to ensnare and usurp them. The same could said of drummer Nick Barker, who had finished his tenure with British symfo metal icons Cradle Of Filth, and what is the point of enrolling one famous scene figurehead, when you can enroll two instead?

Every single thing that the last two records hinted on is magnified to the levels of excess. The synthesizers feature more prominently than before, the riffing is dull, meandering and stagnant, and the annoying vocoder speech of Shagrath becomes a focal point for whatever unfathomable reason. With ‘Architecture Of A Genocidal Nature’ Demon Burger’s loved/loathed demented circus metal act routine rears its ugly, warted head in full swing, and it is exactly as awful as you always imagined it to be. The band, or its core trio, is drunk on its own Kool-Aid and in love with its Hydra-like multi-headed reflection. There is not a black metal riff to be found in this avalanche of pseudo-death, watered down thrash – and heavy metal riff swapping. Genericness is the name of the game, and this record is no different in that respect. At least the bass playing can be heard now, and Simen Hestnaes’ playing is a lot more interesting than Nagash’s bass lines ever were. ‘Puritania’, the unofficial title track to this dangerously inconsistent record so to speak, is a spectacularly embarrassing industrial ditty that is more Fear Factory and Nine Inch Nails than anything else.

Why wasn’t Mark “Flood” Ellis hired to produce this tedious industrial trip? Money couldn’t have been a problem, since hiring Peter Tägtgren and an entire philarmonic orchestra isn’t cheap. The digitized speech, the mechanical staccato riffing, electronic beats and orchestral flourishes mask that this is a one-riff song based upon remnants of material left during the album’s recording sessions. It actually sounds like it was pieced together of random bits and parts with no vision to bind it together coherently. It sounds unfinished, jumbled and incomplete because that is what the band intended. What? It is only a sad indicator of the album’s disjointed and unorganized second half. There is no flow to this record, and everything just exists without rhyme or reason. No amount of expensive orchestrations is going to be able to hide that sore spot.

That is exactly the band’s and this record’s biggest problem. This band and album would have been rated far more positively if it weren’t on their insistence of being classified black metal, whatever that is supposed to mean in the current context. Was it not for the ridiculous stage outfits, the goofy corpse paint and the even more cheesy pretend-evil charade of the whole thing - this could actually be described as a moderately enjoyable violent, orchestral death/thrash metal record with tons of too loud blaring synthesizers, clanging digital drums and migraine-inducing keyboards to spice up the pretty mundane underachieving riffing and vanilla songwriting. There are plenty of workable ideas here, some good ones even, that get hammered into oblivion by Demon Burger’s age-old tendency of repeating itself over and over again. The riffing mostly tends to go nowhere, but that’s perfectly tolerable if the ideas surrounding it are valid. This happens far too few times to be called a virtue. It is more the exception than it is the rule. Still there are some good ideas here, and as per usual the thing is super catchy. It is just unfortunate that what few good ideas there are, are surrounded by exercises in mediocrity far too often than is healthy, or in good taste. “Putrid Electronic Mediocrity” is more like it.

Thankfully, Simen Hestnaes’ amazing clean vocals feature prominently on four tracks, and you’re not forced to endure Shagrath’s incessant croaking, listless rasps and lifeless digital speech. It isn’t much of an improvement, but at least it’s progress of some kind. Along with his more lively bass playing this is about the only good thing about this record, outside of Nick Barker’s impressive performance behind the drum kit. It is truly unfortunate that Barker only lasted (for no more than) two albums with this unit. If there ever was the idea to put together a new symfo metal act consisting of ex-Dimmu Borgir members, Barker should sit behind the kit, with Jamie Stinson on lead guitar, Nagash on rhythm guitar, Simen Hestnaes on clean vocals/bass guitar, Stian Aarstad on synthesizer/piano and put former Hecate Enthroned shrieker Jon Kennedy behind the microphone. Imagine the possibilities. Labels would be falling over each other to sign this act based on name recognition, personell and cross-market appeal alone. It would be far more technically adept, musically ambitious and more fascinating than anything Demon Burger continue to churn out at an alarming rate. I realize this is just wishful thinking on my part, a small-time internet critic who spents far too much time dissecting and analyzing things most average people don’t even register or worry about, but putting together the sacked members of this outfit in a new constellation and a creative environment should prove interesting and worthwhile in the long run, even if it was just a studio/recording-only project. The fact that it hasn’t come to pass just puzzles me…

What exactly is the three-word album title supposed to mean? If misanthropy is so euphoric, why then is it puritanical? Is the band even trying anymore at this point? I can almost see Shagrath, Silenoz and Galder each throw a dictionary against the wall in turns, writing down whatever word catched their fancy on the page it fell open upon. That’s about the level of reasonable sense this title makes: none. The lyrics are a lot of incoherent blabber as per usual, and the photography in the booklet is even cheesier than last time around. Does anybody still take these guys serious? If so, when did you last have your head checked? Holy cow, are these guys pretentious and in love with their own reflection. Sadly, the band’s hasn’t quire reached its nadir yet, cos “Puritanical” is only one side of the equation – the follow-up album would be the other. The horror!

I have no idea how the cover art is supposed to tie in with album, its lyrics or the general idea behind both – but I suppose it is exactly the kind of thing you’d expect to happen. Conveniently timed to pick up on the Napalm Breast Brigade (a frightening amount of bands on Napalm Records in the early 2000s had semi-naked and topless women on their cover) trend, and there was certainly a sexually frustrated demographic for this type thing in Demon Burger’s own audience. In fact, the only thing I even remotely appreciate about this cover art is the exposed female bust. Why it must remain headless and limbless is another thing entirely. Why is the symbolism hid behind the bust? Aren’t the band the scary, evil Satanists they project to be? Why bother with symbolism if you are going to obscure it anyway? Why is the barbed wire hooked in each of the female torso’s limbs? Why are her breasts exposed far and wide, yet her cleanly shaven pubic area is conveniently covered by the barbed wire? Why is she being choked by barbed wire? Are Demon Burger closeted homosexuals deadly afraid of the female anatomy? They looked pretty disgusted posing with that naked model for the “Spiritual Black Dimensions” promo photo shoot, so this seems like a logical leap from that point on. Anyway, Cradle Of Filth did this whole thing better with the Nigel Wingrove erotic photography on their first album and “V empire” EP many years earlier.

Seemingly confused as to what they were, and what they wanted to be “Puritanical Euphoric Misanthropia” is a haphazard mess of half-baked ideas and somewhat successful concepts that feel out of place in their current form. This would have worked quite effectively as a four track EP. ‘Blessings Upon the Throne Of Tyranny’, ‘Kings Of Carnival Creation’ and ‘Hybrid Stigmata’ are excellent cuts worthy of the symfo death/thrash metal tag. These coupled with that orchestral ‘Fear and Wonder’ intro piece, and what you have is everything you need to hear about this record. The remaining tracks only recycle the idea of these the aforementioned ones in varying degrees and with varying amounts of orchestral backing. Why would you want to subjects yourself to another 6 retreads of ideas cultivated better in the first half of the album, and sit through another pointless outro before it all finally ends? “Puritanical Euphoric Misanthropia” is a glorious mess, and you know it.