Formed in 1991 by brothers Paul and Benjamin Ryan along with vocalist Dani Davey in Suffolk, England as a third-tier death metal act Cradle Of Filth is one of the greatest success stories since Iron Maiden. No other band tends to be as polarizing or as cross-marketable as these Brits. The trio spent 1992-93 releasing a swath of demo recordings to no avail until they decided to start integrating symfo – and gothic elements into their basic death metal sound. “The Principle Of Evil Made Flesh” was the last record of the post-“Goetia” line-up. A highly atmospheric death/thrash metal record with a vampyric Hammer Horror concept - it was a mere dress rehearsal for its troubled but widely acclaimed “Dusk… and Her Embrace” album, arguably their finest moment. 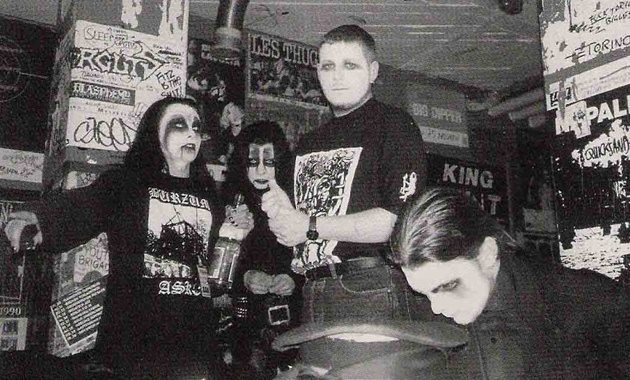 “The Principle Of Evil Made Flesh” was the first official release for the band, but its second chronologically after the illfated “Goetia” sessions for the doomed Tombstone Records. These sessions featured a different rhythm section with bass guitarist Jonathan Pritchard (Jon Kennedy), and drummer Darren Garden – the former would resurface as the frontman in the very similar sounding Hecate Enthroned while the latter would disappear from the scene altogether. At this juncture from the previous session vocalist Dani Davey, an aspiring journalist, and co-founding siblings Paul (guitars) and Benjamin Ryan (keyboards) remained. The record was the debut of the band’s new rhythm section comprising of Robin Eaglestone (bass guitar) and Nicholas Barker (drums). Cacophonous Records originally wanted Cradle Of Filth to cut an EP’s worth of material as an introduction but the band decided to record a full album for the label instead.

The album contains a choral intro and a trio of instrumental interludes to establish a downtrodden gothic atmosphere and to emphasize the darkly romantic lyrics. Of these ‘Darkness Our Bride (Jugular Wedding)’ is the only truly mandatory for the experience. ‘The Black Goddess Rises’ first appeared in an early form on the 1993 “Total Fucking Darkness” demo tape, but is expanded and reworked here. It now includes longer lyrics that integrate all the lyrics to ‘Fraternally Yours, 666’ , an organ outro that appeared on the same demo recording. ‘Of Mist and Midnight Skies’ lifted its organ intro in its entirety from the beginning of Johan Sebastian Bach’s ‘Toccata and Fugue in d minor’. The organ melody itself is known in popular culture for its relation to the Dracula character and vampirism in general, making it an ideal moodsetting piece for the song. Further strenghtening the Dracula ties is the fact that ‘A Dream Of Wolves In the Snow’, narrated by Darren White from Anathema, opens with a line from the 1897 Bram Stoker novel that served as a source of inspiration for much of the album.

As the record came after the aborted “Goetia” sessions it is only natural to see a lot of the material intended for that album resurface here. ‘The Principle Of Evil Made Flesh’, ‘To Eve the Art Of Witchcraft’, ‘The Black Goddess Rises’ and ‘Of Mist and Midnight Skies’ all appeared in their original form on the scrapped “Goetia” session but were duly re-recorded in superior form on this album. The “Goetia” song ‘Spattered In Faeces’ was taken apart, and had its respective strong parts repurposed within two new songs. The keyboard melody and its corresponding chords/riffs were fused into ‘A Dream Of Wolves In the Snow’. The keyboard – and harp melody that first appeared in said song were used for the conclusion to closing track ‘Summer Dying Fast’.

Compared to its subsequent output “The Principle Of Evil Made Flesh” is subdued on many fronts. Davey’s vocal cadences squarely remain in the lower region, and his rasp is more ghoulish than shrieking, although that also happens. Often classified as black metal for easy categorization but it is a misnomer for this debut that effectively shortsells it in many ways. The writing and riffing is on the death metal spectrum of the genre. Much of the synthesizer work functions purely as an atmospheric enhancement. Likewise is Nick Barker’s drumming derived more from thrash – and early death metal than the work of its Scandinavian forebears. Barker’s style hadn’t fully developed yet, and as such he consider it as one of his lesser works. On “The Principle Of Evil Made Flesh” he sounds more like a less fill-heavy Mike Smith circa “Breeding the Spawn”. Robin Eaglestone’s prominent bass licks already hint at the flowing style he would showcase on “Dusk…and Her Embrace”. Dani Davey’s vocals here sound as a raspier, strangled variation of the grunt that Kam Lee wielded on Massacre lone call to fame “From Beyond”. 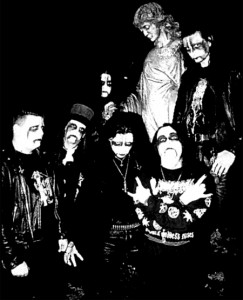 Like their British contemporaries Bal-Sagoth, Cradle Of Filth was categorized as black metal due to a few minor stylistic overlaps, its vampyric imagery and Satanic rhetoric. That the band forced its breakthrough during the symfo black metal explosion (led foremost by Norwegian band Emperor) didn’t help matters either. One of Cradle Of Filth’s biggest innovations, genrewise, was combining primal death/thrash metal with opulent gothic orchestration and female vocals. Helping immensely in selling said innovation was the band’s vampyric/erotic concept that mainly draws from the old Hammer Horror movie atmosphere more than any of the later albums. Providing the female vocals are the duo of German-born spiritualist Andrea Meyer (who doubled as the band’s Satanic advisor at the time) and Danielle Cneajna Cottington. Like its orchestration these were subdued and supplemental.

Although presenting itself as a black metal band in terms of imagery Cradle Of Filth’s relation to the genre is tenuous at best and nonexistent at worst. Davey’s lyrics and the record’s general sense of misanthropy suit either genre. The lyrics, the most confrontational and overly anti-religious in its early catalog, read as something you’d expect of Morbid Angel (“Blessed Are the Sick”, “Covenant”) or Jeff Gruslin era Vital Remains. They are eloquent, verbose and poetic in equal measure – although there are no overt mentions of Satan in name. Most of it is conveyed through suggestion. The album is bookended by two instances wherein the band’s Satanic rhetoric is, albeit in a subtle manner, revealed. ‘Darkness Our Bride (Jugular Wedding)’ consists of a single invocation: ‘agios o(s) Satanas’ (‘O Holy Satan’ in Greek) and ‘Imperium Tenebrarum’ (which was simply dubbed ‘War!’ on some of the album’s various international versions) is a reworking of the ‘Invokation to Baphomet’ from “The Black Book Of Satan”, one of the four tomes that make up the Satanic Bible, and the one to promote hedonism. The latter was narrated by Frater Nihil (Neil Harding, CEO of Cacophonous Records and allegedly a head priest of The Order of the Absu.)

“The Principle Of Evl Made Flesh” was recorded at Academy Studios with Robert Magoolagan producing, and was mastered at The Exchange by Nilesh Patel. For the most part is the record has a fairly standard production for the time. Academy Studio was famous for producing the early work of UK romantic doom metal band My Dying Bride. This led to some concern on part of My Dying Bride that Cradle Of Filth would imitate its famed keyboard sound. The limited funding of the production shines through in the lack of rich tones, the absence of much textural depth, the basic drum sound and the occasionally hokey sounding keyboards and organs. The cover photography by Nigel Wingrove was commissioned specifically to mimic the front cover of the “Bloody Kisses” album by American goth rockers Type O Negative. The album was released through UK label imprint Cacophonous Records, that licensed the record to Morbid Noizzz Production for a tape release in Poland. The band decided to terminate its contract with Cacophonous Records after they found their promotion for “The Principle Of Evil Made Flesh” unsatisfactory. This resulted in a lawsuit and an EP that would shape the band’s future output.