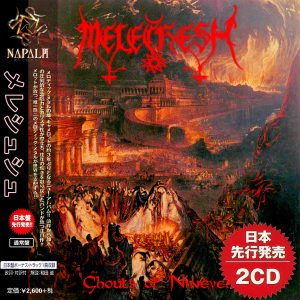 Self-professed Mesopotamian black metal combo Melechesh - originally based in the metal unfriendly environs of Jerusalem and Bethlehem, Israel who later relocated to the more secular Amsterdam, the Netherlands and recently France and Germany - has always been one of the more interesting of the original second wave bands. Together with Orphaned Land they were among the earliest to combine underground death/black metal with Middle Eastern instrumentation and Arabic folk music. Their legend and repute grew considerably in the second half of the nineties as they fled Israel under mouting pressure from strict religious authorities resulting from the release of their controversial domestically bred debut “As Jerusalem Burns... Al'Intisar”. Since their 1996 debut Melechesh has released three albums on French imprint Osmose Productions and two on the considerably bigger Nuclear Blast Records. Suffice to say Melechesh has an interesting history and oeuvre to say the least. This is where “Ghouls of Nineveh” double-disc comes in… 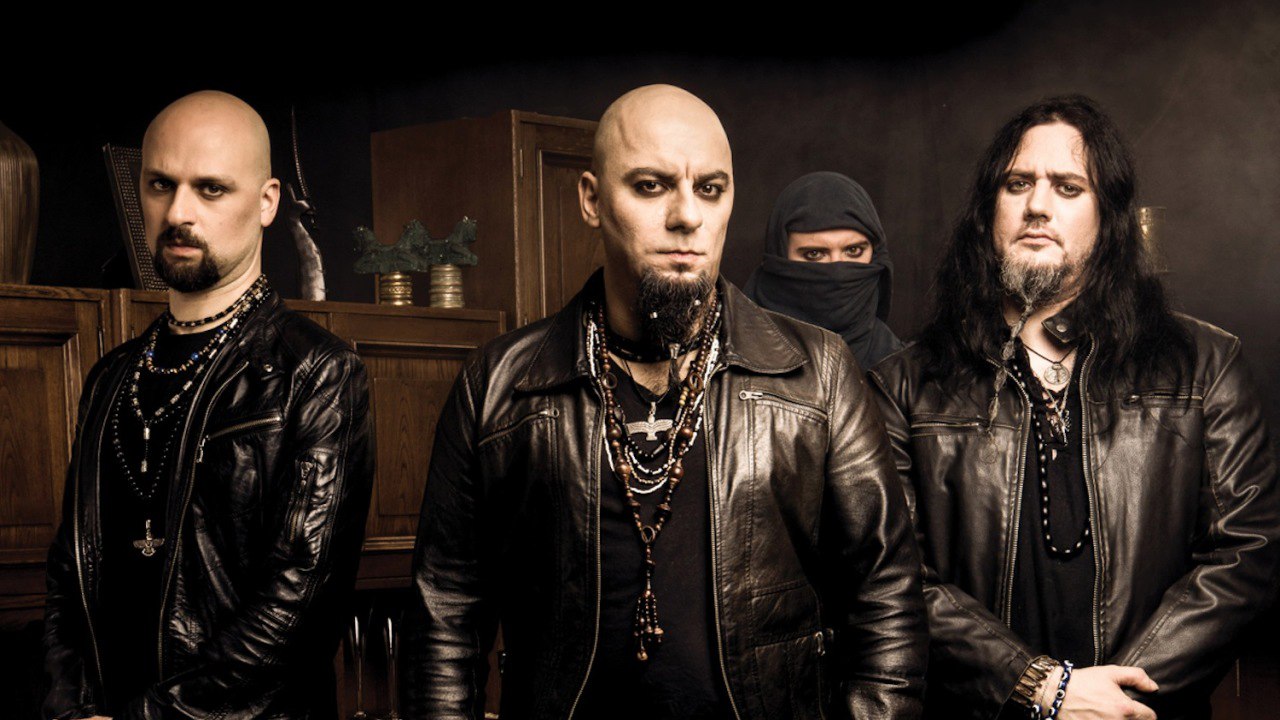 Thanks to the wonders of international licensing and distribution rights as well as the fine people at Napalm Records and their partners Nippon Phonogram there’s now a compilation for the casual fan who wants to whet his/her appetite as to what Ashmedi and his rotating cast of musicians have been up in the past almost quarter of a century. “Ghouls of Nineveh” is a Japanese-exclusive double-disc career retrospective spanning all of the Melechesh discography, bar “As Jerusalem Burns... Al'Intisar” and the prior demo. Interestingly there’s but a single track from 2001’s “Dijnn”, four tracks from “Sphynx” (2003) and almost the entirety of “Emissaries” (2006). The remainder of content for both discs is culled from “The Epigenesis” (2010) and “Enki” (2015) or the more widely known, far better produced recent releases on German conglomerate Nuclear Blast Records. The lack of inclusion of tracks from the band’s 1996 debut “As Jerusalem Burns... Al'Intisar” and the accompanying demo “As Jerusalem Burns...” from a year earlier is insulting to say the least. That there’s but a single track from “Djinn” but almost the entirety of “Emissaries” is another puzzling decision. Space that could’ve been put to better use by evening out selections from each album instead of what was done here. It is understandable, at least from a sonoric point of view, but as a historic document (what compilations should strive to be) it is a major point of contention. To dispense with the obvious, “Ghouls of Nineveh” covers most of the ground you’d want of a compilation and as such it is more than representative for Melechesh as a whole.

To their everlasting credit Melechesh always was more of an Ancient Rites than a Nile. Melechesh is more concerned with conveying a Middle Eastern atmosphere than with playing at an inhumanly fast pace and/or being technical just for its own sake. The band evolved from Ashmedi's earlier, short-lived death metal solo project Crushed Cenotaph. Upon release of the  “As Jerusalem Burns...” demo and their debut a year later Melechesh were charged with “dark cultish” activity by religious law enforcement officials of the Holy Cities of Jerusalem and Bethlehem, all of which were later dropped. While considered Israeli the members are in fact of mixed descent, most prominently Armenian-Assyrian, Assyrian, and Arabian-Syrian. Central to the band’s lyrics are Mesopotamian and Sumerian history, antiquity and mythology and “The Epigenesis” is an exception in that regard as it concerns the titular concept derived from Greek philosophers Aristotle (in his Historia Animalium) and Plato. Melechesh has overcome many hurdles and countered every prejudice/bias that any band in their part of the world might face.

Where Nile has downsized its Egyptian component considerably over the last decade, Melechesh has done the opposite and worked diligently to integrate as much ethnic instrumentation and Arabian folk music as its genre of choice would allow. Along with Orphaned Land, Melechesh has been one of the pillars of Middle Eastern metal and their output has consistently been one of quality over volume. Where Melechesh has made the most obvious strides forward is in fusing ethnic instrumentation and Middle Eastern folk melodies with their patented stomping melodic black/thrash metal. What Melechesh unlike, say, Nile benefits tremendously from is their more deliberate choice of tempo. Not that Melechesh ever had any shortage of able skinsmen. Whether it’s Saro Orfali, Proscriptor McGovern, Yuri Rinkel, or Samuel Santiago behind the kit.

Melechesh always allowed its songs to breathe and neither of their drummers had the proclivity to fill every second of every song with needlessly elaborate fills or double-bass blasts. Something of which George Kollias, Derek Roddy and several others are prone to, often to the detriment of the songs. It’s puzzling why “Ghouls Of Nineveh” capitalizes so heavily on the band’s Nuclear Blast Records repertoire when their releases on Osmose Productions and Breath Of Night Records are considerably harder to come by, and even moreso in Asia. Why then that this double-disc compromises for the most part of cuts from “Emissaries”, “The Epigenesis” and “Enki” is anybody’s guess. As a historical document “Ghouls Of Nineveh” blunders by not evenly distributing its track selection among the albums.

Of course the question of legitimacy looms toweringly over this double-disc. “Ghouls Of Nineveh” was released by Austria's Napalm Records in cooperation with Nippon Phonogram. Perhaps it has something to do with international licensing laws since all of the band’s major releases were issued through France’s black metal specialist imprint Osmose Productions and Germany’s Nuclear Blast Records. Had this compilation been curated in cooperation with Ashmedi and his bandmates surely the song selection would have been more even-handed. For the most part “Ghouls Of Nineveh” is a missed opportunity. It’s representative enough for most of the Melechesh discography, but the focus on the band’s recent output isn’t necessarily to its advantage. Obviously there are far worse compilations out there – and Melechesh is the last band to be accused of milking its fanbase for money. 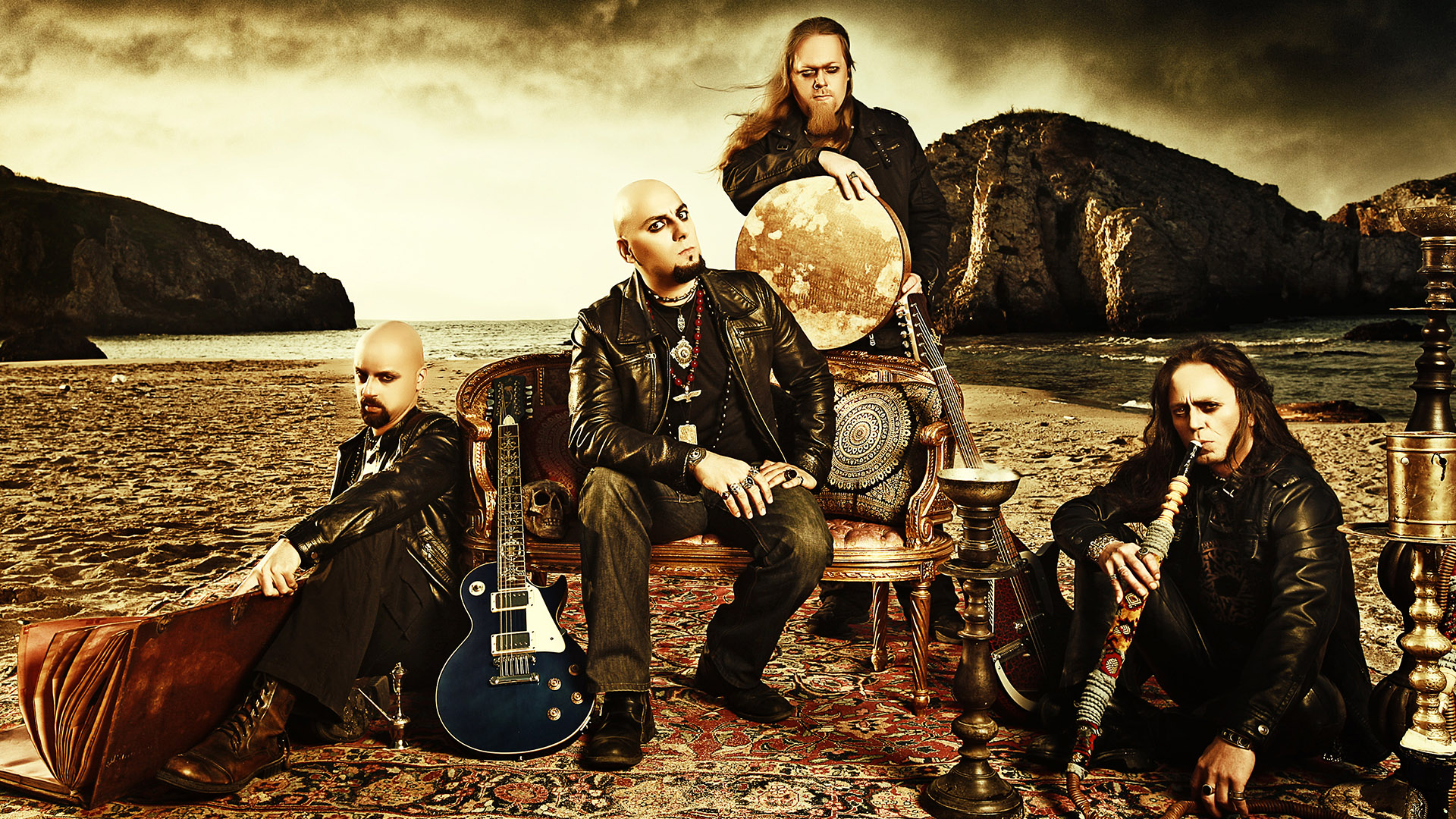 How exactly this compilation came into existence, or what motivation was behind it besides good old-fashioned greed, is anyone’s guess. There are no indications that Melechesh has terminated its long-standing contract with Nuclear Blast Records, nor does the artwork chosen for this compilation reflect any of the band’s usual aesthetics and imagery, other than pillaging promo material publicly available from the albums it selects material from. Melechesh is in no hurry to acknowledge the existence of “Ghouls Of Nineveh” – and neither do the usual music databases. There’s definitely an audience for a band-approved Melechesh compilation. The purveyors of true Assyrian black metal deserve better than this. This might be interesting for the casual fan, but that's all positive that can be said about it.