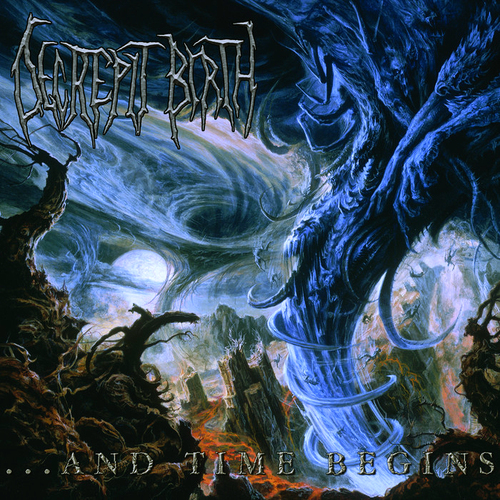 There never has been such a waste of talent as on the debut of California death metal act Decrepit Birth. Recorded as a trio at the band’s home studio in Santa Cruz and including studio drumming by the noted Tim Yeung (who cut his teeth with studio work for Hate Eternal and Aurora Borealis) “…And Time Begins” merely scratched the surface of what founder/guitarist Matt Sotelo would later present. Bill Robinson is an unremarkable vocalist in every meaning of the word, and a record as redundant as  “…And Time Begins” does not help his case at all. The performance of bass guitarist Derek Boyer on this record would be instrumental in him being hired by reformed New York death metal stalwarts Suffocation. While far from terrible, the first Decrepit Birth record is one of squandered opportunities, and a waste of the talented cast involved in its creation. This record should have been much better than it is. This shouldn’t have been another soulless and unnecessary Deeds Of Flesh knockoff. Sadly, it is just that and nothing more. 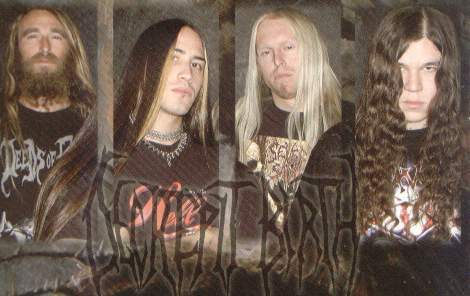 It’s hard to tell any of these songs apart, except for signature song ‘Shroud Of Impurity’ which either sounds like “Inbreeding the Anthropophagi” Deeds Of Flesh or “Conquering the Throne” Hate Eternal at various points. ‘Concepting the Era’ sounds slightly more diverse in terms of pacing and structure compared to the rest of the songs. That the band refuses to play any leads/solos is, of course, detrimental to these songs as they would have been much more easily to recollect with an identifier, or two. One but last track ‘Of Genocide’ is different from the rest of the album. It is much slower and sounds a lot like “Blessed Are the Sick” Morbid Angel instead of the rampant Suffocation and Deeds Of Flesh worship on display on the remainder of the album. The similarities with Deeds Of Flesh track ‘A Violent God’ are readily apparent. This is about any and all subtlety you’ll encounter on this particular outing. The title track is a 9 minute exercise that is far better and more ambitious than a good number of these other songs combined. Why the rest of the album wasn’t written in this manner is a question for the ages. For the most part in its quest for brutality Decrepit Birth forgot to write songs.

Bill Robinson tries his best to sound like Disgorge vocalist Matti Way. There are a couple of instances where his grunts are overlaid with screams, but its usage isn’t as prominent with this band as with Deeds Of Flesh (a band that lifted that aspect themselves from Deicide). Thankfully, Robinson enunciates far better than the eternally indecipherable Way. In terms of power Robinson is similar to Fleshgrind frontman Rich Lipscomb. The bass guitar can thankfully be heard on “…And Time Begins” with Derek Boyer providing some fine licks to go with the limited material. There are bass breaks in ‘Prelude To the Apocalypse’ and ‘Condemned to Nothingness’, but their appearance is too brief to be of any real merit. While the bass guitar itself is thick and oozing its clinical modern production eschews the instrument’s bottom end heaviness for a lighter tone. Perhaps the band would have benefited from a heavier tone similar to Cannibal Corpse fixture Alex Webster, or even Jan-Chris de Koeijer’s concrete tone on Gorefest’s third album “Erase”.

At least Decrepit Birth, or main composer Matt Sotelo, was wise enough to go for somewhat interesting lyrics. Avoiding the usual and tired subject matter such as horror, blasphemy and gore, the band adopted a broad science-fiction concept about the universe, astral phenomena and the conception of time and mankind. The lyrics are actually quite refined, and reminiscent of early Suffocation. The album is important in that after its release in 2003 suddenly death metal bands all over California (and the US as a whole) who had previously sung about horror, perversion and gore started adopting science fiction lyrics, and adapting themselves accordingly. The concept would be explored in greater detail on the band’s second album “Diminishing Between Worlds” but at least some degree of thought and consideration was put into them. Unfortunately do the somewhat interesting lyrics not compensate for the redundancy of the music present on the disc.  One is hardpressed to call these sci-fi lyrics original, as Nocturnus and Demilich were already doing such a thing in the early 90s. In 2003 there were better releases to procure, such as Mithras’ “Worlds Beyond the Veil”, Diabolic’s “Infinity Through Purification” or Nile’s “In Their Darkened Shrines” from the year before.

As everybody was using digital art Decrepit Birth made a wise choice in commissioning the Dan Seagrave art that adorns the record. This in turn led to renewed interest in his repertoire as a classic death metal artist. The album was mixed and mastered at Imperial Mastering by Colin Davis (of the band Vile). On the whole “…And Time Begins” is a competent death metal album that gets by on the grace of its unrepentant brutality, which is a detriment for the exact same reason. This was a mere lovenote to Decrepit Birth’s inspirations, and not a true display of their musicality and skill. The fact is that the band plays far below its skill level on this album. The fact that it’s so painfully average and unremarkable makes one question how the band ever got as far as they did. “…And Time Begins” is a typical early 2000s Unique Leader Records release, meaning that it was competent in what it intended to do, but lacked that spark to set it apart from the hundreds of other bands attempting a similar thing the world over. It’s only the Dan Seagrave art that truly set its apart from the Jon Zig fronted releases of the day. In all “…And Time Begins” is a good record in spirit, but not one to go down in the annals of extreme metal history as mandatory or vital. It is an album marked by a dire waste of talent and squandered opportunities. Decrepit Birth was to reveal its renewed sense of purpose and direction only half a decade later with their much better second album.