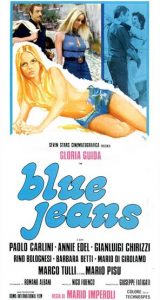 Even though Blue Jeans is one of the earlier entries in Gloria Guida’s extensive, and often lowbrow, tour of duty as one of the prime Lolitas - together with Lilli Carati, and Jenny Tamburi – in the Golden Age of commedia sexy all’italiana genre it is not a typical example of the form. Guida carved out a respectable carrière thanks to her fantastic derrière. Former Miss Teen Italy, 1974 Gloria Guida was the star of a series of raunchy comedies, she wouldn't truly establish herself until her turn in Fernando di Leo’s To Be Twenty (1978). The year before la Guida played her soon-to-be signature liceale, or the Catholic school girl, in Silvio Amadio's The Minor (1974). La Liceale (1975) (released in North America as The Teasers) set Guida on the way to commedia sexy all’italiana superstardom and her liceale would figure into three sequels over the two-year period of 1978/79. Blue Jeans is cut from a different cloth and resembles her That Malicious Age (1975) more than anything else. That Malicious Age (1975) put glorious Gloria in advanced state of undress opposite of Nino Castelnuovo, Anita Sanders and peplum stars Andrea Aureli and Mimmo Palmara.

Like many of Guida's comedies Blue Jeans tends to be more on the melodramatic side than the outright comedic, although that does occasionally happen too. No matter what the circumstance what Guida's comedies did tend to feature was plenty of incidental - and situational nudity - and Blue Jeans is no different. Blue Jeans reunites slender-bodied Guida with Monika (1974) (released domestically as La Ragazzina) director Mario Imperoli, and co-stars Paolo Carlini, and Gian Luigi Chirizzi. Just like Monika is Blue Jeans at its best when it combines melodrama and comedy with the often very naked hijinks of Gloria Guida. As Il Resto del Carlin film critic Vittorio Spiga accurately observed Blue Jeans is "an adult comic book that flows into a real exaltation of the remarkable ass of Gloria Guida". 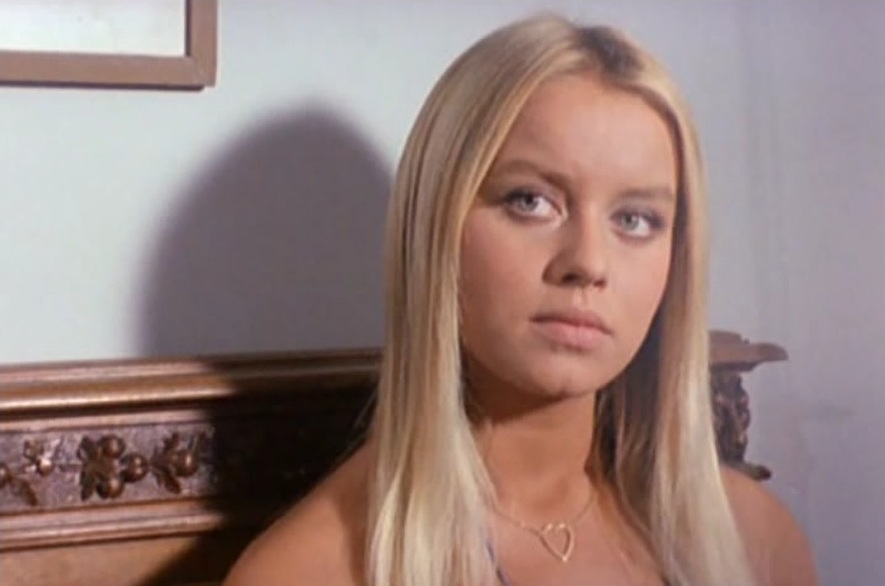 Wasting not a moment on illustrating exactly why the movie is called Blue Jeans the viewer is treated to a credit montage of the camera following and hovering around a pair of very lowcut Blue Jeans. At least Imperoli got his money’s worth out of Gloria Guida who the pair of jeans, and the glorious richly-formed posterior in them, belongs to. Blue Jeans is the kind of girl that gets catcalled, felt up in public places, and that makes drivers stare uncontrollably causing road collisions on a daily basis. Busted on a prostitution charge for soliciting a middle-aged client (Marco Tulli) Blue Jeans reveals that her name is Daniela Anselmi (Gloria Guida), and that she’s the illegitimate daughter of Latina, Lazio artist, Dr. Carlo Anselmi (Paolo Carlini). The authorities are willing to drop the charge if Carlo is prepared act as Daniela’s legal guardian until she reaches majority. Carlo dutifully agrees to his newfound parental duties, much to the chagrin of his live-in girlfriend Marisa (Annie Carol Edel, as Annie Karol Edel), jealous of the attention the young girl is getting. As Carlo attempts to teach Blue Jeans some culture, modesty, and, well, manners; her hormonally-charged pranks, and proclivity to run around naked, cause Carlo to grow affectionate of the stray. That is until Daniela’s squalid boyfriend Sergio Prandi (Gian Luigi Chirizzi) shows up, and things take a turn for the fatal. At least British comedy Venus (2006) with the late Peter O'Toole and Jodie Whittaker was so kind to lift most of its plot from an old Italian melodrama-comedy that few remember.

The eleventh hour introduction of Daniela’s lecherous boyfriend Sergio Prandi (Gian Luigi Chirizzi) is one of the screenplay's weaker moments. His presence disturbs the growing bond between Daniela and her estranged father. Chirizzi is a typical Italian prettyboy, and he’s obviously no David Hess, nor a Giovanni Lombardo Radice. While the role aims for a sociopathic loner, Chirizzi is only able to make Leo mildly annoying at worst. Prandi is about as threatening, or non-threatening rather, as the teen boys Daniela pulls a prank on during a socialite party at the opulent castle Moroni is restoring. A great source of comedy - outside of Guida’s tendency to turn up naked at the most inopportune moments - are the house servants that help Moroni in the day-to-day operations of the restoration. One of the servants is so smitten with Moroni that she follows his orders to the letter, even the scolding, slightly demeaning ones that Carlo throws her way in an offhand manner when he’s agitated. Other times they ensure that Carlo always has his orange juice.

It’s not exactly the sort of thing you’d expect of writer Piero Regnoli, a prolific scribe who started in the business in 1952 and who caught his first big break with Mario Bava’s I Vampiri (1957). Regnoli was the go-to man for commedia sexy all’italiana, sceneggiata, poliziotteschi, spaghetti westerns, and post-apocalyptic actioners, but he also signed off on some of the most horrid screenplays this side of Rossella Drudi and Claudio Fragasso when the Italian horror industry all but collapsed in the late 80s. For the most part the screenplay is a reworking of Imperoli’s earlier Monika (1974) and Regnoli might, or might not, be responsible for its third act murder scheme. The sudden and jarring shift in tone, and Daniela’s 180° behavioral change that results from it when Prandi appears, are the only strikes against the otherwise lighthearted Blue Jeans. What makes the tonal shift so damning is that prior to Prandi’s entrance Daniela had been a sexually promiscuous exhibitionist and her turning docile and submissive in the face of her socially non-adapted lover doesn’t quite gel with anything and everything prior. Her precociousness, lust for life and Mediterranean temperament are completely negated once Prandi makes his entrance as Moroni’s supposedly-but-not-really mute apprentice. 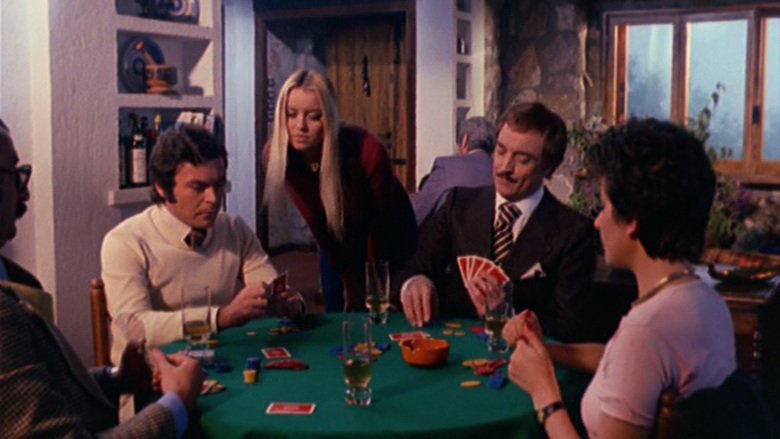 Returning from Monika (1974) are Paolo Carlini, Gian Luigi Chirizzi, and in a much smaller role, Mario di Girolamo. Annie Carol Edel had been a reliable supporting actress in comedies, peplum, and dramas of various stripe. Blue Jeans arrived towards her fin de carrière. Before and after Blue Jeans Edel was in films from Antonio Margheriti, Bitto Albertini, and Umberto Lenzi, but also in productions from legendary hacks as Bruno Mattei, Joe D’Amato, and Alfonso Brescia. Edel partially redeemed herself with Salomè (1986), an art house adaptation of an Oscar Wilde play chronicling the Biblical tale of King Herod and Princess Salomé. Paolo Carlini and Gloria Guida appear to be the primary draw as far as cast is concerned. Guida for being the pretty new girl, and Carlini was a respected character actor.

The obvious reason to see Blue Jeans is Blue Jeans herself, Gloria Guida. Imperoli gets a lot of mileage out of Guida, who was completely comfortable shedding clothes whenever the script required, and he shoots her from every flattering angle. Whether it are the bookends where Imperoli’s camera focuses on Guida’s ample behind, the pranks Blue Jeans pulls at a socialite party in her new home, or the tricks she pulls on the dim-witted housekeeping staff at the castle – all of it usually involves the loss of clothing. A big draw for Blue Jeans is the extensive nudity on account of Gloria Guida. Guida, who compensates her lack in chest by her long legs and ample behind, was never the greatest, or most gifted, of the Lolita comedy actresses – but her lack of acting talent didn’t impede on her apparent ability to build an extensive career around taking her clothes off on a semi-regular basis. None of the nudity in Blue Jeans is crass and/or debasing as Mario Imperoli was a craftsman, first and foremost, and not an ordinary smut peddler as certain other Italian directors of dubious merit. Blue Jeans is rife with images of Gloria Guida in the buff, but none of it is ever vulgar as it would have been in lesser hands. 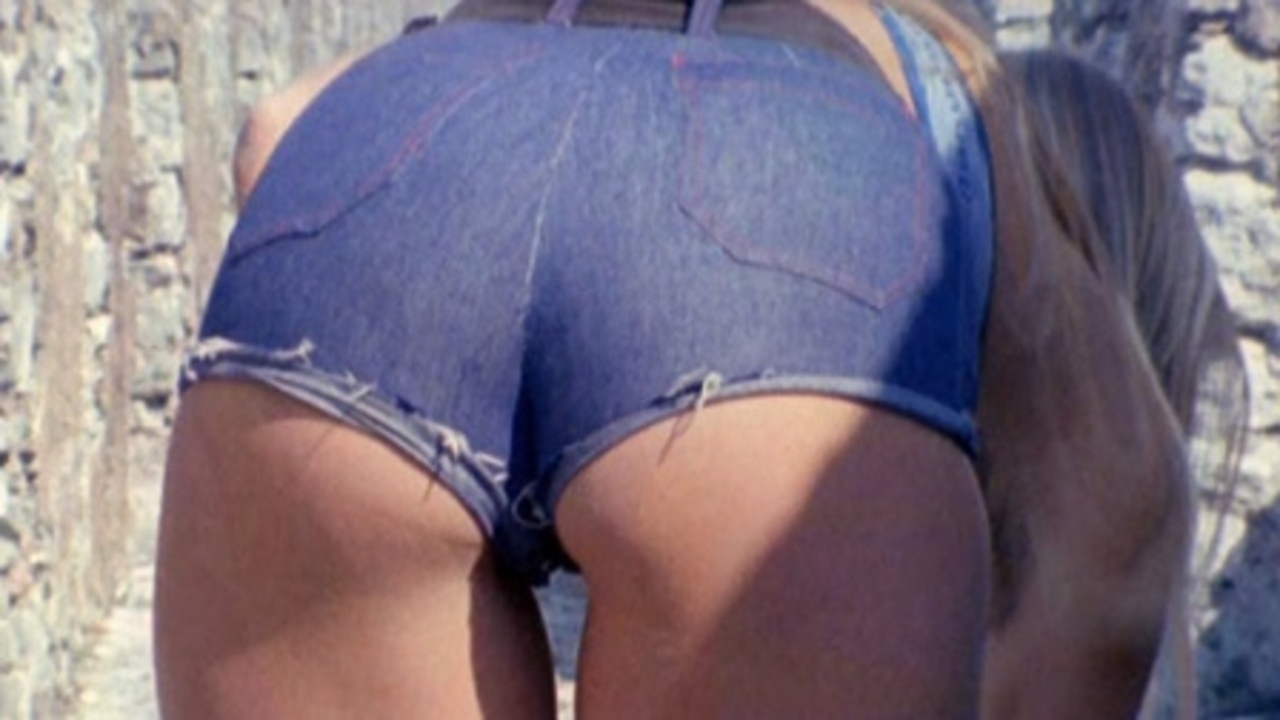 Proving that a modest budget and a simple premise - or more likely the constant presence of Gloria Guida’s fantastic ass - put more butts in seats than her acting talent Blue Jeans grossed a total of around 310 million lire at the Italian box office. None too shabby for an unassuming little genre exercise low on plot and who’s entire raison d'être seemed to be Gloria Guida in various stages of undress. What probably also helped was that Mario Imperoli knew that it took more than pointing the camera at a beautiful girl in, or preferably out, of whatever little fabric she was wearing. Imperoli’s direction is workmanlike, and just like Gloria Guida still manifested no discernable acting talent beyond taking her clothes off, Imperoli compensated in competence what he lacked in individual style. All of which doesn’t stop Blue Jeans from being a very enjoyable romp, especially prior to the clumsy third act revelations and hasty conclusion. It wouldn’t be until Fernando di Leo’s subtextual tour de force To Be Twenty (1978) that Gloria Guida showed some depth in her acting, probably due to the presence of fellow Lolita Lilli Carati.