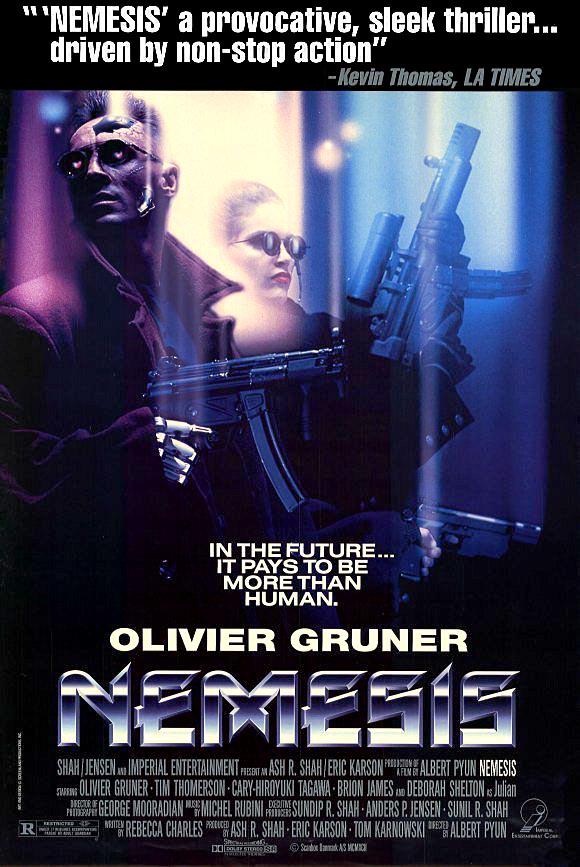 Nemesis was the only of the original quadrilogy to have any discernable talent in front of, and behind, the camera. Albert Pyun wasn't always the schlockmeister he eventually turned into. In 1992 he was a halfway promising action movie director. Above all else Nemesis is stylized in its adrenaline-pumping mix of martial arts, dystopian science fiction, and Hong Kong heroic bloodshed. Elevated beyond mere pulp thanks to a tight script that intelligently borrows from James Cameron, John Woo, and Paul Verhoeven Nemesis attempts, no matter how daftly shot and generic, to say something, anything, about the human condition. While there might not be much flesh to its metallic bones, the machine beneath it is rock-solid.

The screenplay, written by Rebecca Charles and an uncredited David S. Goyer, paints a dystopian future vision reminiscent of a William Gibson novel. In the distant future of 2027 Japan and America have merged, economically and politically,  and man and machine have become intertwined. Cybergenetics and human augmentation have become everyday commodities. Information terrorism is the order of the day. LAPD officer Alex Rain (Olivier Gruner) is tasked with intercepting data chip smuggler Morico (Borovnisa Blervaque), resulting in massive collateral damage and the woman’s head being blown off. Rain is chased, and eventually killed, by chief gunwoman Rosaria (Jennifer Gatti). In a scene mirroring the resurrection of Alex Murphy in RoboCop (1987) Rain (or what remains of him at any rate) is taken to the Marshall Islands where he's re-assembled through bio-engineering and synthetic reconstruction. The then-partial cybernetic Rain is sent to apprehend Morico in Baja, New Mexico. Rain is debriefed by his android handler Jared (Marjorie Monaghan, a less square-jawed Megan Boone) and her blonde partner (Marjean Holden). His old mentor LAPD Commissioner Sam Farnsworth (Tim Thomerson) deems Rain fit for new field operations. Instead he decides to retire to New Rio De Janeiro as a black market mercenary. 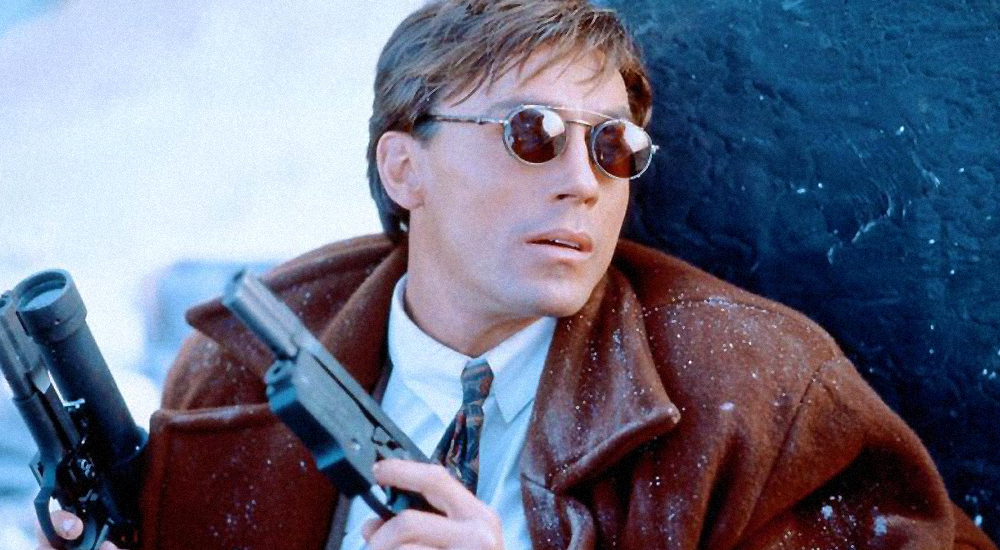 Rain's rest is short-lived as his explosive reputation and predilection towards violence puts Farnsworth, now at a genexus between man and machine, and his henchman Maritz (Brion James) on his tail. Both men have other plans and coerce him into accepting a mission to track down his former handler Jared, who has since gone rogue. To get Rain to do their bidding they install a small explosive charge in his heart. Now forced to cooperate against his will Rain tracks Jared down to Shang Loo, Java where he comes to the realization that in a society where humanity has been rendered obsolete, a war between the last bastions of mankind and the industrialist machines is looming. Jared, who has shed her android skin and exists in a permanent state of digimortality, has fallen in with the Red Army Hammerheads, the last faction of assorted humanity that refuses to bow to their cyborg oppressor. The established order has been strategically mechanized by the cyborgs. They seek to subjugate, and eventually demanufacture, all of humanity. Now a peon in a much larger conflict Rain is forced to choose an allegiance. Helping him with that are Hammerhead leader Angie-Liv (Cary-Hiroyuki Tagawa), Jared's sometime-accomplice Julian (Deborah Shelton) and Max Impact (Merle Kennedy), a slender female who either practices capoeira or parkour and looks something of a 90s counterpart to Analía Ivars, albeit with a far less pronounced bosom. Rain ponders the soul of a new machine and thus becomes their Nemesis. 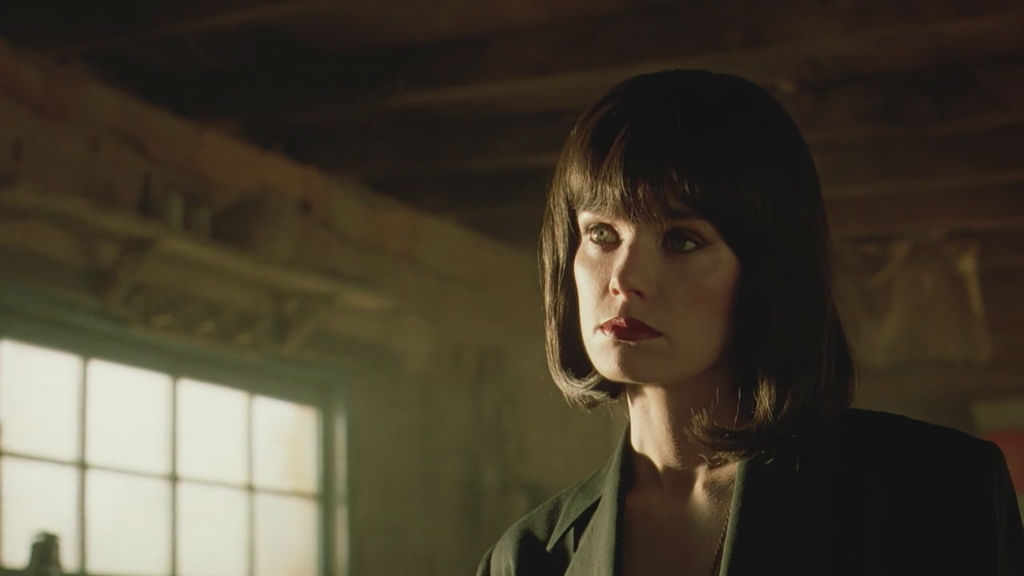 The star of Nemesis was Parisian kick boxer Olivier Gruner, who had worked as a consultant on the Jean-Claude Van Damme action romp Lionheart (1990). Pyun had conceived Nemesis at the end of a three-picture deal with Cannon. The project originally went under the name Alex Rain with both Kelly Lynch and Megan Ward being attached to it as lead stars. The project was put on hold as Pyun tended to other obligations and several years and rewrites later it resurfaced in its current form. Imperial Entertainment, duly impressed by Pyun's ability to helm marketable product within the allotted time and budget, was given the green light. The caveat was that Nemesis had to be a vehicle for their new discovery: Olivier Gruner. Unfortunately Nemesis didn't launch Gruner into stardom, instead he found himself working in low-budget action and science-fiction ever since. Which is all perfectly understandable since Gruner is probably a worse actor than Van Damme, Steven Seagall and Michael Dudikoff combined. 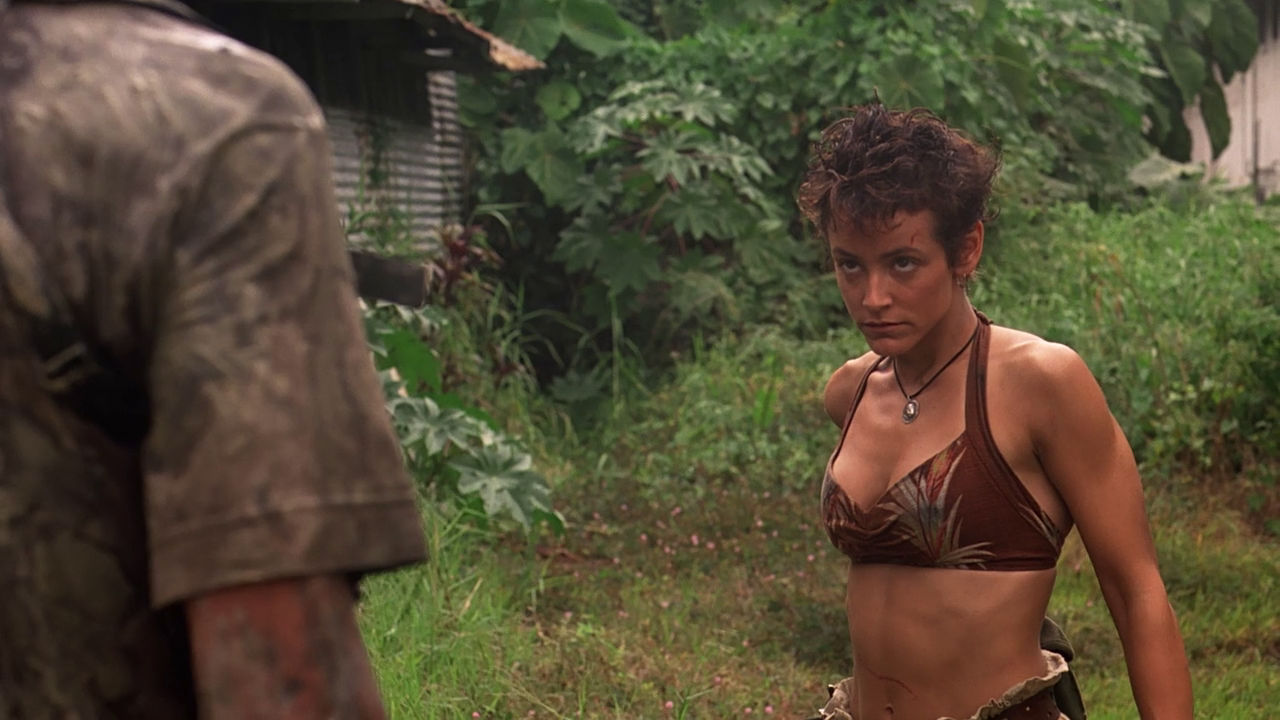 Nemesis was Albert Pyun's first feature of note after his initial success with the sword-and-sorcery flick The Sword and the Sorcerer (1982) and the Jean-Claude Van Damme post-apocalyptic action yarn Cyborg (1989). It also is one of Pyun's best looking productions by a wide margin. It seamlessly weaves together Hong Kong action, some martial arts, and American action movie clichés into an admittedly slick, hyper-stylized whole. Nemesis has an impressive cast including future Pyun stock talent Tim Thomerson and Yuji Okumoto as well as character actors Cary-Hiroyuki Tagawa, Brion James, Jackie Earle Healey, Branscombe Richmond and a very young Thomas Jane. There's no shortage of bodacious, gun-toting, short-skirted women with the likes of Borovnisa Blervaque, Jennifer Gatti, Marjorie Monaghan, Marjean Holden, Deborah Shelton, and Merle Kennedy. Like any good pulp title Nemesis is simultaneously stylish and completely derivative of better properties - but it's also prescient of the Hong Kong action and cyberpunk trend of the 90s predating The Matrix (1999) by over half a decade. It isn't for nothing that some of its scenes were replicated in big-budget Hollywood productions years later. 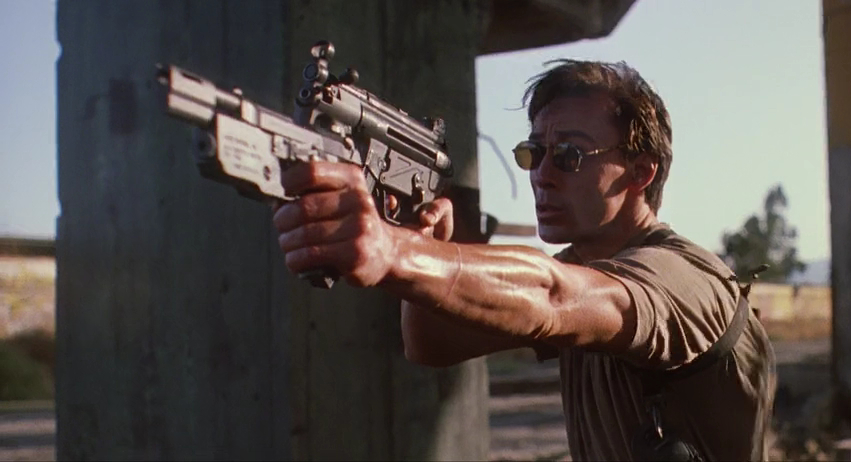 Rain's escape from a goon-infested hotel in Shang Loo was copied verbatim in the daft Len Wiseman actioner Underworld (2003). In Wiseman's movie a leatherclad Kate Beckinsale shoots her way through several floors to her escape. The look of the agents, and the wardrobe of the female assassins during the opening shootout, would be copied by Wachowski siblings in their 1999 science-fiction hit The Matrix. Nemesis isn't without its share of humor either. In a surgery scene aped from The Terminator (1984), Julian is forced to do ocular inspection on Alex, "Now this is gonna," she starts, "sting a little?" Alex matter-of-factly asks. "No," Julian remarks prior to starting the procedure, "it's gonna hurt like a motherfucker!" Nemesis then shifts gears and foreshadows its first sequel with a jungle segment redolent of Predator (1987). Farnsworth, replaced in the interim by a cybernetic infiltration unit programmed to execute Rain, gives chase. After a protacted chase sequence that forms much of Nemesis’ second half the metallic endoskeleton of Commissioner Farnsworth grapples onto the airborne plane in a scene that simultaneously rips off Ridley Scott’s Alien (1979) and James Cameron’s The Terminator. Rain drops Farnsworth in a volcano because no B-movie is complete without a live volcano. 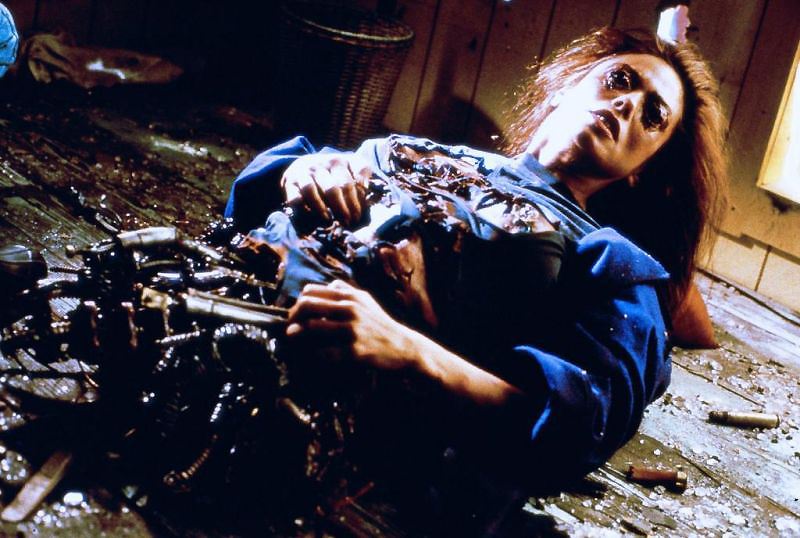 Beyond mere gun pyrotechnics and lifting from better movies Nemesis has a thought or two in its head. Much like Rick Deckard from Blade Runner (1982) and the hardboiled detectives from Raymond Chandler and Philip Marlowe novels Alex Rain waxes faux-philosophically about the nature of his rapidly eroding humanity and the state of his eternal soul. These bouts of existential fear are somewhat offset and ineffectual as they often happen when Raine is in process of gunning people down en masse. As Jared puts it at one point, “It took them 6 months to put him back together. Synthetic flesh, bio-engineered organs. It always scared him that they might take out his soul, and replace it with some matrix chip.” In the second half of the movie everybody, on either side of the divide, keeps telling Alex that he’s, “more machine than human”. While Pyun would remain prolific through out much of his career seldom, if not ever again, would the screenplays (written either by himself or his associates) aspire to these kinds of ambitious conceptual heights. Nemesis is completely and entirely derivative, but in that rare good and intelligent fashion. 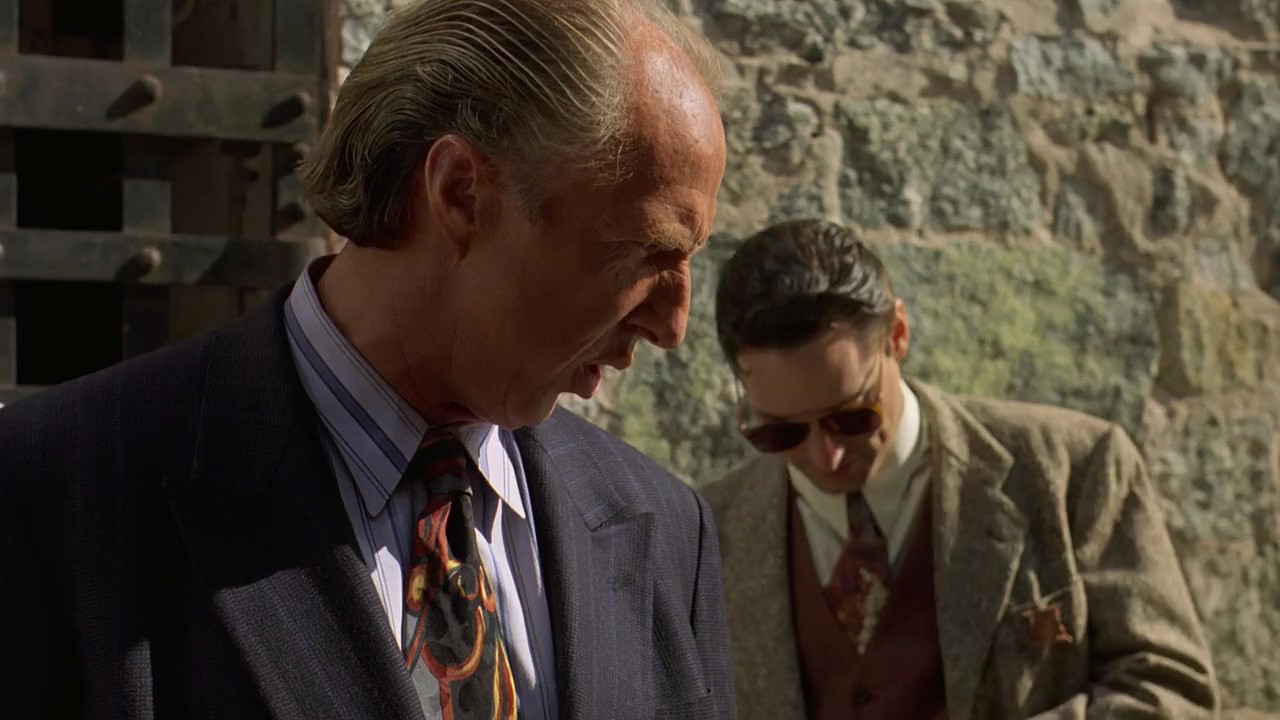 Nemesis is, to put it mildly, sparkly. Director of photography George Mooradian and Pyun love to shoot everything beautifully lit and in soft focus. Everything has the cinematography of a sex scene even when it is anything but. Sparkly is very much Pyun's calling card. There's an outspoken adoration for Hong Kong action cinema with the completely over-the-top gunplay, inexplicable explosions, and reducing enemies to a splatter of sparks, wires and exposed circuitry. Pyun often gets carried away with his depictions of trench-coated, bespectacled people shooting at each other in slow-motion and in soft focus. Pyun realizes he is no John Woo and probably never will be, but he tries. Albert Pyun was always prone to stealing from the best and never hid his adoration for his superiors. Nemesis transcends its derivative nature by the sheer amount of starpower involved.

The women are universally and uniformly beautiful. Jennifer Gatti and Borovnisa Blervaque completely steal the opening gambit set piece that has them systematically obliterating an already blasted out industrial wasteland to bits. Certainly a scene that inspired many a video game in terms of multiplayer arena matches. Blervaque was a French model who appeared in music videos from Richard Marx and Eddie Money with Nemesis being her only cinematic credit of note. She was born Myrtille Blervaque in Paris, France but changed her name to Blueberry and later to just Blue when she started modeling. Marjorie Monaghan looks the part, but her acting certainly isn't worth the price of admission. Marjean Holden is barely a character worthy of the mention but her pairing with Monaghan is at least effective, no matter how minuscule its overall importance. Pyun treats the viewer to a leering look of Deborah Shelton’s well-formed, sweaty posterior, but makes sure to give the ladies something as well by showing Olivier Gruner and Thomas Jane in various stages of undress. Much like Cat Sassoon in Angelfist (1993), Julian’s globes remain sturdily in place no matter how she moves. 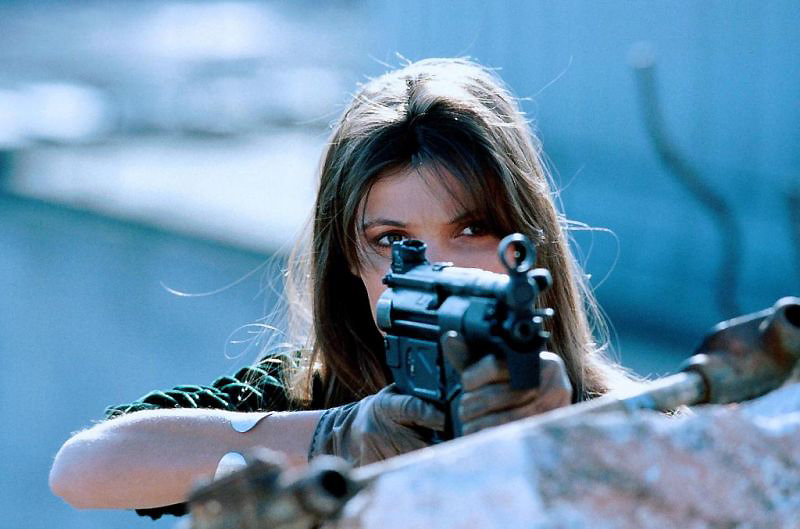 Nemesis is a highly stylized, action-packed and breakneck paced genre exercise that pays homage to many, often better realized, productions – but remains strangely watchable despite hardly ever being coherent as far as the storyline and characters are concerned. It manages to avoid most trappings of low-budget action cinema and lends itself to repeated viewings. Nemesis has all the gunfire and explosions than one could reasonably ask for. It was followed by three, largely unrelated, in-name only sequels with Sue Price taking over from Gruner, all of which were unfortunately penned by Albert Pyun. Alas, Nemesis is a lone high-water mark in a franchise that never lived up to its promise and potential.

As of 2017 a fifth installment is in production (with no involvement from Gruner) called Nemesi5: the New Model from director Dustin Ferguson. In Nemesi5: the New Model Price returns as the aged mentor to the titular new model Ari Frost (Schuylar Craig). For this fifth episode Pyun served as executive producer. As a stand-alone piece Nemesis is derivative and the franchise would never reach the level of competence on display here again. That the franchise took a turn for the worse after its two original screenwriters bade their farewell speaks volumes of just how strong and efficient the first Nemesis was. The continuing and continued existence of the Nemesis franchise is puzzling enough by itself, especially in the light of Ferguson taking over the dystopian cyberpunk action mantle from Pyun...