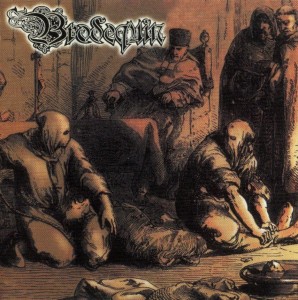 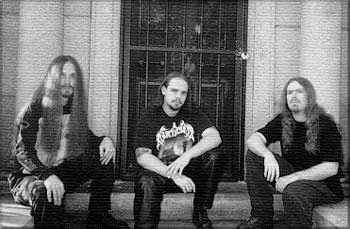 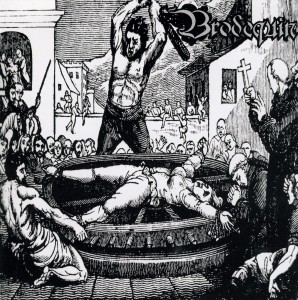 Much like formative act Cannibal Corpse before them Southeastern power trio Brodequin was a band with a clearly defined, singular focus. Like its more popular Buffalo-born/Tampa-residing progenitor the trio of Jamie and Mike Bailey with drummer Chad Walls set out on a very specific course. In the decade that they were originally active, from 1998 to 2008, Brodequin released three albums, of which “Instruments Of Torture” was the first. Reviled and revered in equal measure the album embodies both the best and the worst of what the underground death metal genre has to offer.

Formed in Knoxville, Tennessee in 1998 under the provisional name Tortured Existence (a reference to New York band Demolition Hammer, who released an album with that name in 1990) before settling on its eventual moniker. Brodequin released a solitary demo session prior to forming its own label imprint to release its music. The band consists of siblings Jamie (vocals, bass guitar) and Mike Bailey (guitar) with drummer Chad Walls. Realizing the near unmarketability of its music, and unsuccesfully shopping around its 1999 demo tape to labels around the world, the brothers founded their own label imprint and distribution company Unmatched Brutality to retain complete control over its product. The maiden release for Unmatched Brutality has exactly the type defects and shortcomings one can expect. The idea behind the album is more than commendable, the concept the band chose is fascinating to say the least – but the presentation is lacking on several fronts. 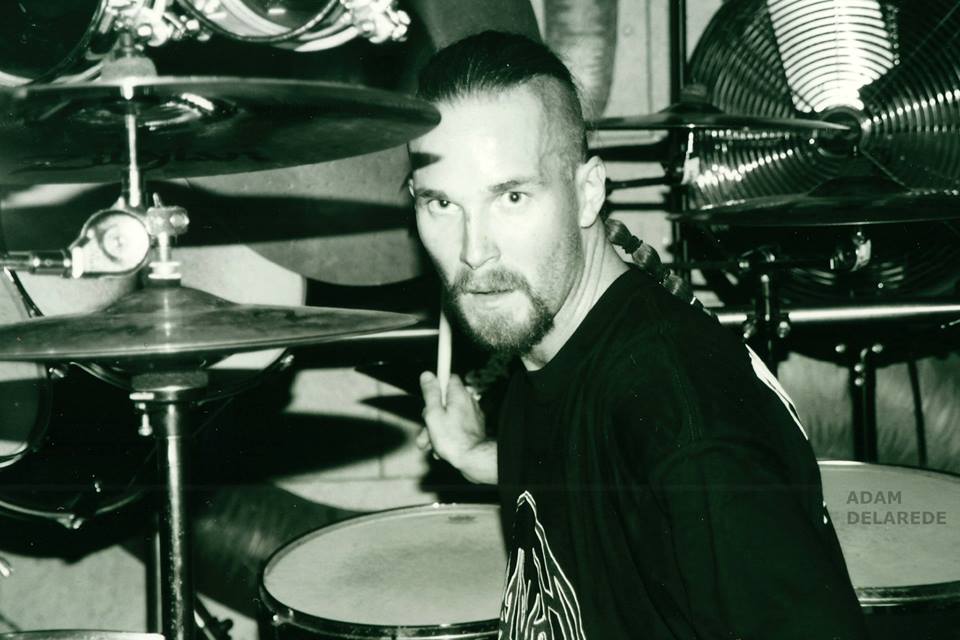 Brodequin, a name taken from a torture device used in medieval France designed to break the victim’s legs, lives up to its moniker. Its three albums are conceptually similar to those of South Carolina entity Nile in that both units chronicle a very specific subject in excruciating, minute detail. “Instruments Of Torture” is a record not only infamous for its complete lack of production, but also for being a case of truth in advertising. Thematically the record has a singular focus on torture devices and – techniques and the historical figures that used, or were associated with, them through the ages. The record is exactly as painful to sit through as the very devices and historical events that it describes so graphically in its lyrics. “Instruments Of Torture” contains all four tracks of the band’s 1999 demo tape. Minimalist on all fronts the record contains but a solitary sample. ‘The Virgin Of Nuremberg’ combines samples of a Latin invocation with the razor cutting scene from the 1980s horror movie “Hellbound: Hellraiser II”.

Described in excruciating detail in the lyrics are working of several torture devices including the breaking wheel, the maiden, the duke of Exceter’s daughter, the strappado, and burning at the stake. Further techniques chronicled are the ones of rat infestation, starvation, religious demagoguery and sectarian warfare over tribal god images, and the more genre typical subject of serial murder. It is rather unfortunate that the well-written and researched lyrics, penned by vocalist/bass guitarist Jamie Bailey, lose much of their impact and emotional resonance due to the monotonous delivery and the record’s utter and complete lack of atmosphere. Liner notes to each song would have helped tremendously in placing them in the required historical context and what transgressions led to such public executions.

The album was recorded, mixed and mastered at Digital Sky Studios in Myrtle Beach, South Carolina with Mike Sky producing. Recorded in just three days in an improvised studio environment it’s no surprise that “Instruments Of Torture” sounds like a rough and underproduced proof-of-concept demo, rather than a fully realized product. The abhorrent production is an unbalanced mess, it is especially detrimental to the string instruments. The guitar and bass are buried under the all-overpowering weight of the vocals and drums. The drums, much like the vocals, completely dominate the sound. The instruments aren’t properly balanced against each other, much less against the vocals. “Instruments Of Torture” is charming in its ineptitude to properly capture what Brodequin was trying to convey. Many of the nuances in the guitar work are either obscured, or completely lost due to the abysmal production. The earliest work of Mortician and Incantation sounded far more professional than this amateurish mess.

The artwork, a medieval drawing called "Jacques Bertault’s Fate", is a depiction  of the trial and punishment of Trois Rivières, Québec citizen Jacques Bertault. Bertault (along with his accomplice/wife Gillette Banne) was found guilty in the case of trying to poison and later beat his son-in-law Julien Latouche, who had been repeatedly abusive to the couple's daughter Isabelle, to death. He was publicly executed at Cap-aux-Diamants by punishment of the wheel on June 9, 1672 in four o'clock in the afternoon. Banne was hung for her involvement in the crime. Records show that Isabelle Bertault would marry twice more and have two children with her second husband Noël Laurence. She would pass away herself on March 7, 1736. The artwork was designed by British illustrator Mary Byfield, an engraver by trade, whose work was mainly used in the works published by the Chiswick Press.

The breaking wheel (or rädern as it was called in Germany) is often referred to as the Catherine Wheel. The device takes its name from Catherine of Alexandria, a noted 4th century Greek scholar and virgin who became a Christian at the tender of age 14 after seeing visions of the Madonna and Child, and converted hundreds of people to the religion. Devoting herself to study from a young age, she won in debate from some of the emperor Maxentius' best pagan philosophers and orators.  She was scourged, imprisoned, and finally martyred by pagan emperor Maxentius at age 18 and was subsequently sainted. The punishment of the wheel has Frankish (German) origins, but also has roots in France. It was introduced in 1534 by an edict of Francois I. The wheel was reserved for violent crimes such as murder, poisonings, and cases of aggravated nighttime breaking and entering.

“Instruments Of Torture” was one of the earliest releases on the band’s own Unmatched Brutality Records, and frankly it shows. The monochrome artwork fits with the medieval etching that serves as its cover artwork. The layout and design for the release were handled by Jamie Bailey for Voodoo Design Studio. The album was re-released in 2003 with two bonus tracks, a Dead Infection cover ‘From the Anatomical Depths’ and ‘The Garotte’ (from the 2002 “Created to Kill” split album). As it stands “Instruments Of Torture” is only interesting as a historical curiosity. Brodequin was a band with an interesting concept, but the less than optimal execution does considerable damage to what otherwise could have been a mildly interesting genre exercise. Extremity alone can only get a band so far. “Instruments Of Torture” is all the proof of that you need.