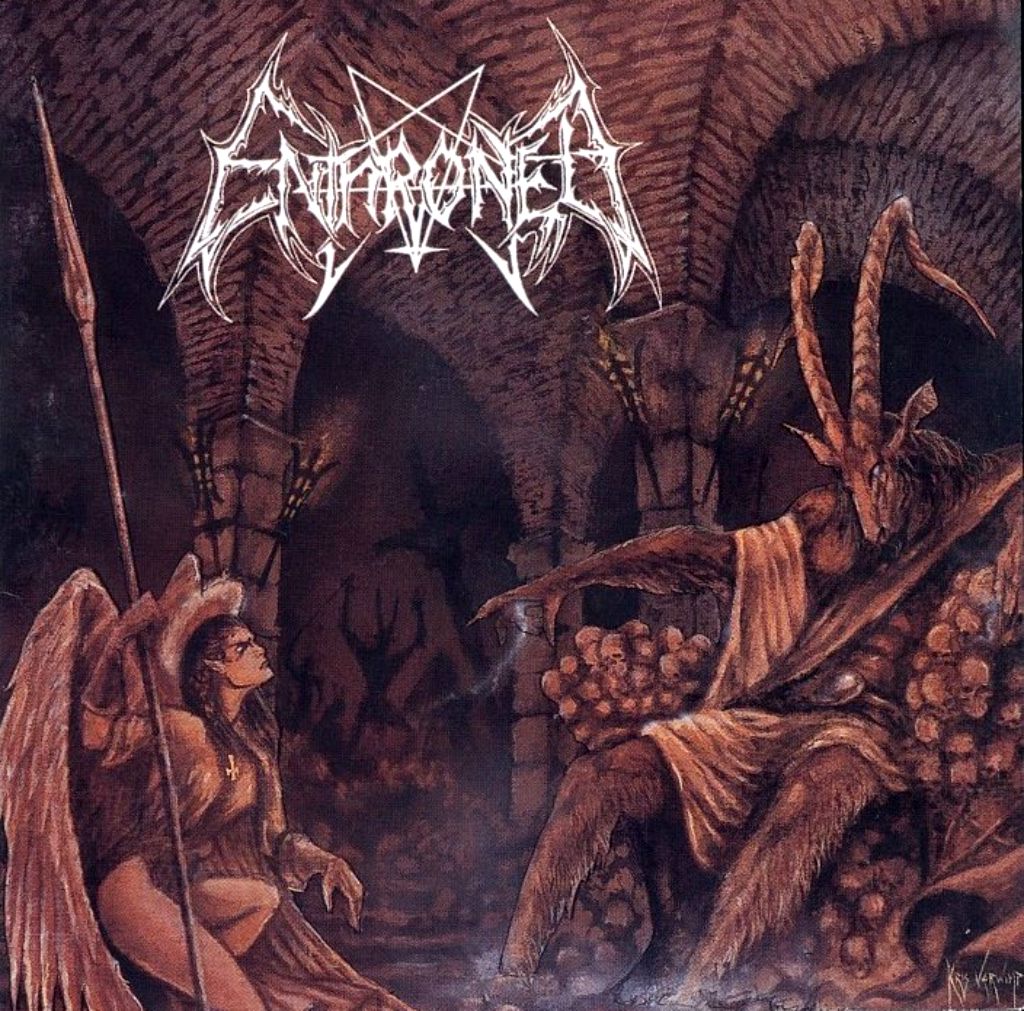 By the time their second album rolled out of the studio much had changed for the Belgians of Enthroned. After the ousting of Vincent Gerard (Tsebaoth) two new, more technically proficient guitarists were enlisted in Régis Lant (Nornagest) and Dimitri Gillard (Nebiros). Originally, drummer Dan Vandenplas (Cernunnos) was supposed to record drums for this session, but his untimely passing through suicide by hanging in 1997 dealt the band an unexpected blow. Sitting in for these sessions is Da Cardoen of local underground act Asphyxia, whose most known contribution to the international metal scene is introducing the world to one Christian Olde Wolbers, bassist and later rhythm guitarist for Los Angeles-based industrial/cyber metal combo Fear Factory.

“Towards the Skullthrone Of Satan” is the first effort of a rejuvenated Enthroned and the initial step towards their complete transformation into a full-blown black metal outfit in more than just imagery. Much like their debut from a couple of years prior this album is still partly steeped in the members’ death metal pasts, while having the other foot firmly in the Norsecore sound that was all the rage when this album was released. The new guitarist duo is tighter, more technical and more proficient songwriters than Vincent Gerard ever was on this band’s first album. Lorent is his usual self with somewhat comical sounding demonic rasps and shrieks, and his bass guitar does not feature nearly as prominent as it did on the band’s debut. On all fronts “Towards the Skullthrone Of Satan” is a faster, heavier and more coherent assault on the senses, and the session studio drumming by Belgian percussionist Da Cardoen would make Krisiun, Angelcorpse or Hate Eternal proud. 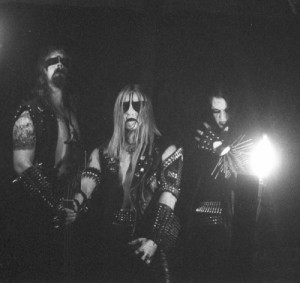 Like their debut album this second studio offering was produced by André Gielen at Hautregard Studio, and it is no surprise that this is mostly a death metal production. The guitars sound incredibly heavy but possess an unreal amount of definition and clarity. The drum kit is massive and entirely crushing with pulverizing toms and snares, while the kickdrums provide much of the low-end heaviness on display. The leads/solos are the highlight of this record, and the ones in tracks as ‘Ha-Shaitan’ and ‘Evil Church’ show a traditional metal foundation not before heard in this band. Thanks to the wonderful production one can clearly hear Enthroned’s transformation into more pure black metal territory in terms of riffing, chord progressions and overall song construction. While the songs here are far more ambitious in terms of construction and scope, much of the intended effect is still taken down by the incredibly cheesy lyrics and song topics.

It’s hard to believe that frontman Franck Lorent is able to sing these lyrics without breaking down in random fits of laughter. Much like the debut the lyrics are full of grammatical - and spelling errors, but they are an improvement over those of their debut. What is carried over from the debut is Lorent’s tendency to spit out long and fast, one-breath diatribes that no doubt could prove problematic in the live arena. The band talks about the usual (and at this point cliché) subjects of ancient evil, horror and Satanic war against culturally ingrained and institutionally organized religion, Christianity in particular. The lyrics try just a little bit too hard to be occult, shocking and evil – as such they end up being unintentionally comical and, well, absurd to a degree. ‘The Forest Of Nathrath’, for example, is an embarrassing ‘tale’ about the Satanic extermination campaign of Christian tribes in the French-Flemish region of Belgium. Everybody knows the band is merely projecting an image. They aren’t going to barge down the local church and set it afire. Therefore all the posturing about “raise high the swords of hate, run to fight the light” and “Spilling the ecclesiastics blood, invoking the supreme shield of eternity” sound a bit empty, insincere and hollow – why not write about what truly irritates you in organized religion instead of this soulless following of established precedents and, by now, well-tread genre tropes? Why not aim just a little higher? 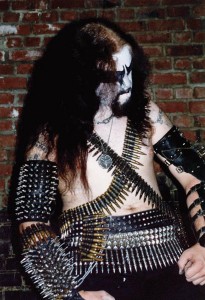 Another thing carried over from the debut is the usage of, albeit limited, supposedly spooky studio effects and synthesizers. Simulated sounds of war introduce us to ‘Dusk Of Forgotten Darkness’ and keyboards appear in limited quantity in this cut as well. The synthesizers are toned down considerably from the preceding album, but their presence still adds absolutely nothing of value to the songs they appear on. Their inclusion is as questionable as they were on the first album. Outside of these hokey studio enhancements Conrad Lant, cousin of current Enthroned guitarist Régis, appears on the intro track ‘Satan’s Realm’ and the slightly more atmospheric ‘Hertogenwald’. Pascal Moraux from Belgian underground death/black metallers Moribund provides guest grunts to spice up the vocal work. Overall these guests don’t add a whole lot of note to the record and nor do the intro and epilogue for that matter. Their presence doesn’t elevate the material above mildly enjoyable hero-worship. Enthroned is far better now than that they have ever been, but they still are just a competent second-tier act at best.

“Towards the Skullthrone Of Satan” is Enthroned’s definitive leap into Scandinavian black metal territory, and the last record to feature any overt death metal influences. The follow-up to this record, the scorching “The Apocalypse Manifesto”, completes the band’s transformation, and has them finally reaching the sound they were attempting on the first two albums, but never quite mastered there. Other than being the one but last record for their current contractor Blackend Records, it would also be their most expensive production. “Towards the Skullthrone Of Satan” isn’t that record, and it is far from mandatory or vital in anybody’s metal collection. Unless you are a die-hard fan, or a completist of the genre in question. Enthroned is entirely second-tier and generic, who is only saved by their sheer level of energy, enthusiasm and perseverance in face of hardship. There’s no reason to rush out and buy this album. It is serviceable for what it is and very generic and mundane at what it does. There are better records in this genre.