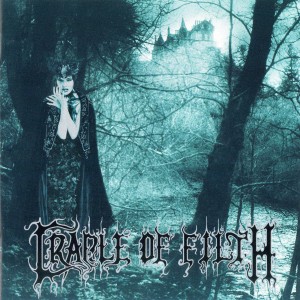 “Dusk… and Her Embrace”, the second official Cradle Of Filth album, was significant from moving the band out of its death/thrash metal roots, and squarely into symphonic – and gothic metal territory. Where the previous outing at least attempted to infuse its metal with a Hammer Horror atmosphere, “Dusk… and Her Embrace”, befitting of the Victorian-vampyric concept that its center, romantic above all else. Despite the album’s convincing visuals and superficialities “Dusk…and Her Embrace” has no lineage with, or connection to black metal. First and foremost it is an extreme metal album, one with links mostly in death -, thrash – and traditional metal styles.

“Dusk… and Her Embrace” is a loose concept album about vampyrism. The lyrics were inspired by the literature of Sheridan Le Fanu, in particular the “Carmilla” novel (which served as an inspiration to everybody from Jess Franco Manera to Ann Rice). The subtitle ‘Litanies of Damnation, Death and the Darkly Erotic’ concisely summarizes the lyrical content of the album. The lyrics retain part of the anti-Christian sentiment but the focus squarely lies on the erotica, vampirism and romance from this point forward. It was the recording debut of second guitarist John Piras (Gian Pyres) and the one but last record to feature vocal contributions from early backing singer Danielle Cneajna Cottington. "Dusk... and Her Embrace" was the last Cradle Of Filth album before Davey's overt usage of British humor and self-aware puns, linguistic and otherwise.

One of the greatest improvements that the band experienced was the sheer flow of the material. “Dusk… and Her Embrace” breaks free from the conventional playing that characterized “The Principle Of Evil Made Flesh”. Here the super bass licks, played by Robin Eaglestone, follow the keyboards instead of doubling the guitars. Stuart Anstis, who debuted on the “V Empire” EP, infuses the band with a healthy amount of traditional metal riffing. Last but certainly not least had drummer Nick Barker come into his own, and “Dusk… and Her Embrace” is his finest moment with the band. Frontman Dani Davey wrote some of his most verbose lyrics while integrating a wide array of vocal styles, including his standard shrieks, grunts, whispers and narration.

‘Humana Inspired to Nightmare’ and ‘Malice Through the Looking Glass’ were written entirely by the new members. ‘Beauty Slept In Sodom’ was originaly called ‘Beauty Sleeps In Sodom’. ‘Funeral in Carpathia’ and ‘Haunted Shores’ are the only truly fast tracks of the album. ‘Heaven Torn Asunder’ is the most straight-up anti-religious whereas ‘Beauty Slept In Sodom’ is the Christian creation parable of Genesis set to prose of vampirism and erotica. ‘Haunted Shores’ is about the Arthurian legend, and functions as a tribute to their home country England. It includes guest narration by British legend Conrad Lant (Cronos) from UK proto-black metal institution Venom.

In an odd turn of events history seemed to repeat itself. As before external factors put the record in jeopardy, and Davey had to overcome legal and personnel hurdles in order to regain control over the authenticity of his product. The album had a troubled two-year production history with the formative work being laid down by previous guitarist duo Paul Allender and Ryan. The original version of “Dusk… and Her Embrace” was recorded in 1995 with most of the “Principle Of Evil Made Flesh” line-up. Ongoing legal proceedings with Cacophonous Records subsequently schismed the band in two opposing camps leaving the record in legal limbo. Paul and Benjamin Ryan along with Paul Allender meanwhile formed The Blood Divine.

As Davey’s half (consisting of himself, Nicholas Barker, and Robin Eaglestone) was embroided in said litigations it was decided to produce the “V Empire” EP as a means to wrangle the "Dusk... and Her Embrace" album recordings out of its existing, and yet to be fulfilled, contract with Cacophonous Records. After winning the court case against its former contractor the original recordings of “Dusk… and Her Embrace” were used by Davey’s part of the band as leverage to negotiate a new and hopefully better recording deal between them and interested labels. Chief among those involved in the bidding war surrounding Cradle Of Filth were British label imprints Earache Records and Music For Nations.

Upon inking a mutual satisfactory agreement with new label home Music For Nations the original “Dusk… and Her Embrace” recordings were relegated to the band vaults where they have remained ever since. As the new members put their spin on what the prior line-up had written the necessary preparations were made to re-record “Dusk… and Her Embrace” a second time. With part of the original content used in the quickly put together “V Empire” EP the band wrote new material to accomodate the remainder of the initially scheduled material. Once the deal with Music For Nations was in place the band re-recorded the freshly rewritten - and newly composed tracks in 1996.

During the second recording sessions a cover of Slayer classic ‘Hell Awaits’, a re-recording of the preceding EP’s ‘Nocturnal Supremacy’ and the instrumental ‘Carmilla’s Masque’ were laid down along with material intended for the album. These featured on the Japanese print of the album exclusively. The complete “Dusk… and Her Embrace” album session would thus include 14 tracks: 9 originals that appear on the final version of the record, plus the duo of ‘Queen Of Winter, Throned’ and ‘Nocturnal Supremacy’ (as they appeared on the preceding “V Empire” EP), along with the two instrumentals ‘She Mourns A Lenghtening Shadow’ and ‘Carmilla’s Masque’ along with the earlier mentioned Slayer cover ‘Hell Awaits’.

After two sessions at Academy Studios the band decided to change locations. “Dusk… and Her Embrace” was recorded at DEP International Studios in Birmingham with Kit Woolven (most famous for his work with Irish classic rock act Thin Lizzy) producing along with Mike Exeter and Dan Sprigg engineering. With a classic rock and pop producer behind the console the production changed accordingly. “Dusk… and Her Embrace” is blessed with a smooth, bassy production that is crystal clear but warm and organic sounding. The cover photography by Simon Marsden is stylistically similar to that of Nigel Wingrove of the preceding two records. The record contains shots of the succubi models Luna, Michelle, Rochelle, and Susie. The CD and LP use different shots for the dinner table band shot, with the model being topless for the vinyl edition. 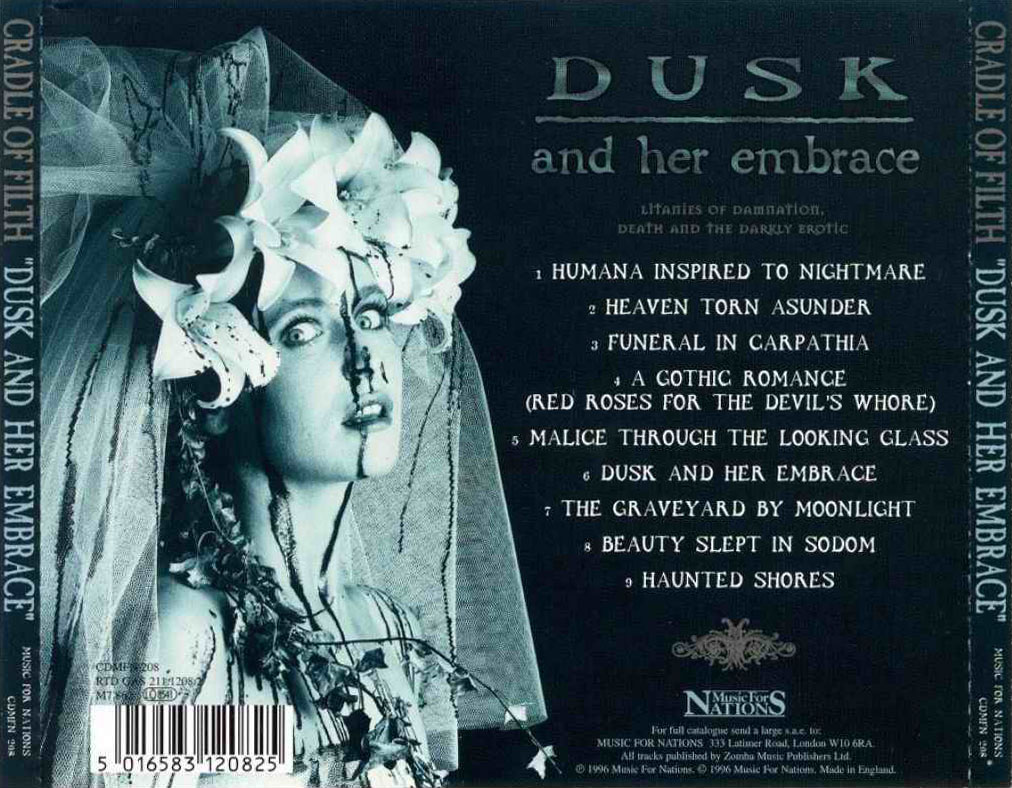 It goes without saying that the originally intended incarnation of the album is radically different from what it would eventually become in its existing form. The current version of the album is far stronger, mostly due to a complete lack of filler material, than how the album was originally intended. Whether the original recordings of "Dusk... and Her Embrace" will ever see the light of day remains yet to be seen. The album sold in excess of 100,000 copies in Europe alone, and was extensively bootlegged on the East-European market with various labels releasing cassette versions of the album. The Polish 1997 print by Metal Mind Productions even includes the Japanese bonus tracks. It goes without saying that it is rightly a classic piece of European extreme metal, regardless of its troubled conception.