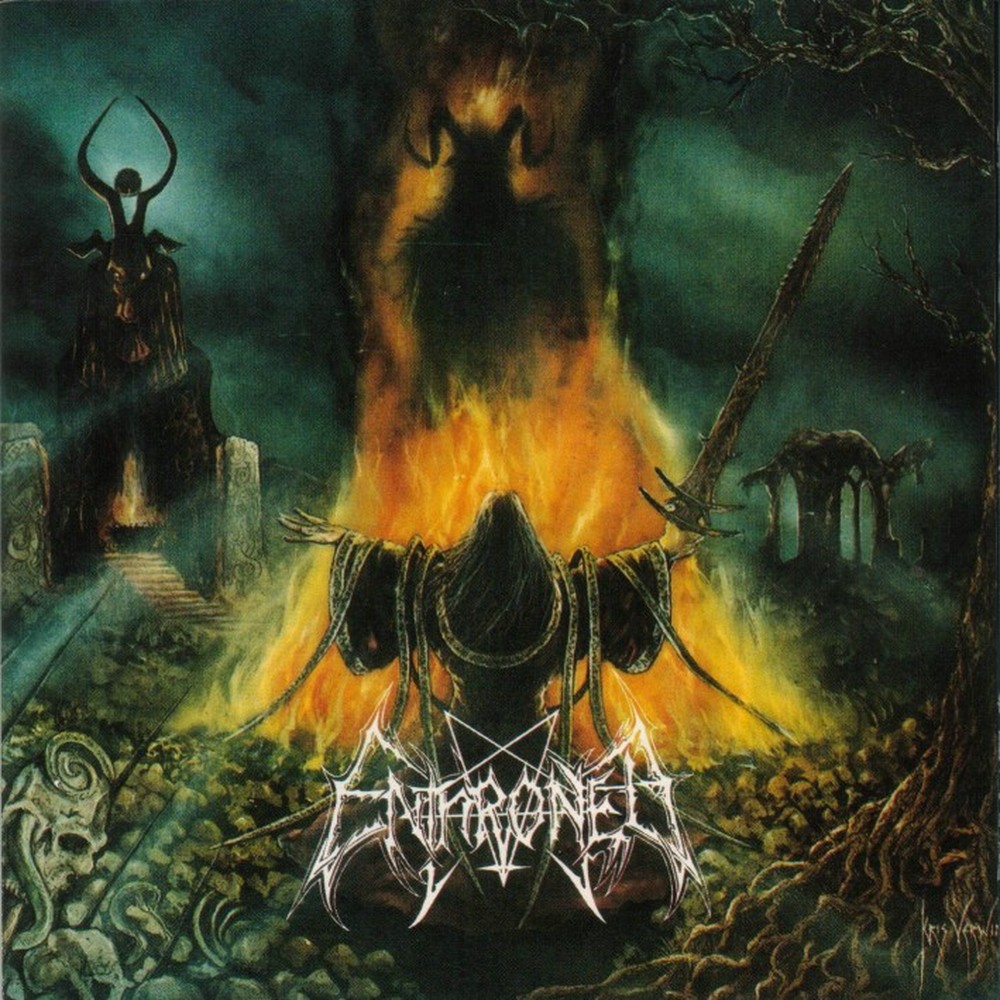 Enthroned was never a real black metal band in the traditional sense. Yes, they all wear corpse paint, spikes and the typical leather outfits – but superficialities aside, the band was only black metal as far as imagery and lyrical content was concerned. Musically, they tap various genre wells outside of their main genre, and that is what makes them somewhat different. That is to say, there has always been a very clear foundation of German thrash – and early European death metal in the song structures, leads/solos and overall heaviness of Enthroned. Which isn’t very surprising when you consider the genesis of this Belgian act, this self-professed “blackened horde” and the members’ individual background.

Franck Lorent (Sabathan) and Dan Vandenplas (Cernunnos) both came from a death - and thrash metal background. Prior to his death metal days Vandenplas was spending time in early cult death/doom formation Blasphereion, who coincidentally released their lone 1991 album “Rest In Peace” on the label imprint that Enthroned would call home years later. Vincent Gerard (Tsebaoth) cut his teeth in Walloon grindcore unit Hybrid Viscery. As legend has it Régis Lant (cousin of Venom’s own Conrad Lant) was asked to join the band, but he declined the offer at the time for reasons unknown. Before enlisting current frontman Lorent, for a little stint Enthroned was fronted by Alexis Plumat who, obviously, not lasted long enough to record anything of note. Not that this in any way devaluates the band or their genre of choice, but the collective experience of the membership does make it rather clear that instead of looking towards Bathory and Venom, these men were looking at Scandinavian units of the second wave of black metal for primary influence, namely Dark Funeral, Gorgoroth, Immortal and Marduk.

When listened to “as-is” the Enthroned debut record sounds like nothing more than an extended love note to the second wave of Scandinavian black metal, which was in full swing when this album was released, and to a lesser degree as a reinterpretation of the sound that Old Funeral went for before its members went on to their more known projects and bands. Under close examination the record comes off unfavorably as most of the ideas are, besides being lifted from better bands with better records, drawn out for far too long. The one or two good ideas that occasionally will surface inevitably end up being done in by the band’s tendency to artificially lengthen their songs, by repeating them over and over again, much to the dismay of the listener, I might add.

‘Prophecies Of Pagan Fire’, the instrumental title track on acoustic guitar, serves no real purpose outside of showcasing some particularly embarrassing spooky studio effects. ‘Deny the Holy Book Of Lies’ (which, admittedly, is a kick ass song title), the first real track of this album, is a mixed bag. When the track finally starts after an extended intro section bordering on nearly two minutes, the listener is almost 5 minutes into the album before it at long last finally commences. From this point onward the limited riff set immediately stands out more than anything, blazingly fast and furious the band rip through a number of older generation of thrash – and death metal standards and techniques, with only the acidic screeching vocals of frontman Franck Lorent to remind us that this is black metal we are supposedly listening to – one could easily assume that this was a death metal band that just happened to play a lot more loose, minimalistic and barbaric.

That isn’t to say that the tracks, or their construction, are particularly bad. They just aren’t very good either, and appear to be long-winded for no other reason than to be so. When the band gets down to business and cuts the crap, they actually can be fairly effective despite their wholly derivative nature and imitator design. ‘Under the Holocaust’ is a mostly fast scorcher that would have benefited tremendously from being cut down a minute or two, to a reasonable 3-minute mark. ‘Tales From A Blackened Horde’ is the most cost – and time-effective track on display here. It gets straight to-the-point, offers a satisfying climax and works towards a suitable conclusion. The biggest offender in this regard is ‘When the Wolves Howl Again’ which, after an all too long drawn out closing section, throws in half-hearted female vocals in an attempt to ape fellow Belgian veterans Ancient Rites and their absolutely stellar song ‘Het Verdronken Land (van Saeftinghe)’, who did a similar atmospheric thing but through the usage of a lone flute. Unfortunately those are the two only songs that aren’t drawn out to ridiculous lengths for the sake of having an album just 5 minutes shy of an hour.

Why does this album needs to be nearly an hour long, you ask? Consider that half of the material present is re-recorded from the band’s self-produced and independently distributed “Promo ‘94”. There isn’t a real significant difference between the older and newer material, beyond that the new cuts are a little better structured and more compositionally ambitious than the re-recorded demo material. It is also rather telling that instead of waiting longer and writing more original material the band was perfectly content to conveniently reiterate a number of demo songs just so that they could be part of what was then an emergent movement in and outside of Scandinavia. Not exactly the sincerest of intentions, unfortunately one cannot remove this important aspect.

Another notable identifier of this debut is the presence and usage of cheap-sounding synthesizers. Now, just to make sure we are on the clear here, I have nothing against synthesizers or keyboards in any shape or form, when they are just properly. On their debut Enthroned use keyboards in a fairly typical underground manner. They are mainly used as an ornamental tool to spice up their fairly mundane death/thrash metal hybrid. ‘Under the Holocaust’ is another example of this very thing. After the guitar break and Lorent goes into his spoken section, the band slows down and goes into a jam while light washes of keyboards (and some studio effects) attempt to create that much sought after eerie atmosphere. The keyboard segment, while not heinously bad in itself, just drags on for far too long without any real purpose, or direction. It only makes its inclusion more questionable. Instead they could have just integrated a start-stop section or some kind of bridge and immediately introduce the track’s rather effective conclusion.

If there’s one thing Enthroned are known for it is their lyrics. On here the band mostly go for imitations of what second wave Scandinavian black metal bands had done before them. Outside of the usual devil-worshipping fare the band sing about Viking-related themes in ‘Skjeldenland’, which is strange when you consider that despite Vikings did land in Belgium, the country has no overt Northern cultural heritage. Other than the band’s limited understanding of the English language, and the glaring amount of spelling and grammatical errors, these lyrics largely consist of second-generation, handed down imagery of the subjects the Scandinavian hordes were talking about at the time. The added bonus here is that to reach their intended shock effect Enthroned up the “evil” factor reducing the lyrics to juvenile Satanic fantasies, and little more than that. Granted, these lyrics are a hoot to glance over – and they are immensely fun to read in comparison to the theological and philosophical waxing of this band’s second era.

The playing on “Prophecies Of Pagan Fire” is tolerable but fairly loose. Vincent Gerard and drummer Dan Vandenplas know their way around their respective instruments, but both aren’t the tightest or most precise players. This becomes especially clear in the faster parts of ‘At Dawn Of A Funeral Winter’ where Vandenplas struggles to keep up with the rest of the band. Gerard is redeemed mostly by the wise decision to break up the song in slower parts, and have Lorent’s bass guitar thunder away viciously. This brings up that other often brought up criticism of Enthroned’s first recording venture: the demo level production. Besides that it sounds nothing like you would expect of a second wave black metal band, the production is incredibly bass-heavy. This on the count of the rumbling kickdrums and Franck Lorent’s bass guitar. Once again, let me preface by saying that the production is perfectly adequate for what it intends to do had this been a death – or thrash metal band, anything but a black metal production. 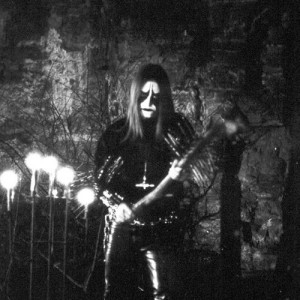 The cover painting by Belgian genre mainstay Kris Verwimp is as good as expected, but the color choice for the backsleeve is puzzling. The black sleeve combines a goofy looking band picture with green lettering, and it is an enormous eyesore to say the least. Why is Lorent carrying an axe in this picture? Is he going to axe down a tree? The dark green lettering in combination with the black-and-white band picture and the all black background is a strain on the eyes. The band logo in the upper left corner and the track titles are hard to make out at any point. Originally the album was scheduled to be released on Belgian label Afterdark Records, but since the label imprint went bankrupt sometime during or after the album’s production it spent little time in legal limbo before being picked up by Evil Omen Records, a subsidiary of French specialist label Osmose Productions. “Prophecies Of Pagan Fire” is the only Enthroned album under this label, and while they would go on to bigger imprints, it would have perhaps been prudent of them to have stayed with this label just a bit longer as they had a strong footing in the genre.

The regional historical importance of this work cannot be denied. As far as Belgian black metal goes Enthroned was one of the earlier examples of non-Scandinavian bands who embraced the Northern sound to a reasonable degree, but would need yet another album to fully master it. Enthroned is as derivative and generic as they come, while the trio’s feelings are sincere this album seems to have taken all the wrong hints from the Scandinavian forefathers of this genre. “Prophecies Of Pagan Fire” is the only Enthroned record to feature the original line-up, with only Franck Lorent remaining on the follow-up album that would be released two years later. Although the band goes through great lengths in the foldout booklet to appear grim and necro, and to prove how "true black & evil unholy warlike metal" they are, they don’t succeed quite as much as they perhaps thought they would. In the end, this debut gets by on the good graces of its hunger, gusto and unapologetic derivative charm – outside of its historical, regional and nostalgic connotation there isn’t a whole lot here that is actually anything other than generic.