After having parted ways with the demo line-ups drummer Ricky Myers rebuild Disgorge from the ground up. The recently dissolved Strangulation had two of its members pooling to Disgorge. The album is the recording debut of its newly established line-up. In this constellation, which lasted from 1992 to 2006, Disgorge released four albums on a variety of labels, of which this is the first. “She Lay Gutted” features the classic line-up of founder Ricky Myers (drums), along with Benjamin Marlin (bass guitar), Diego Sanchez (rhythm guitar) and celebrated vocalist Matti Way. For better or worse the album introduced a more violent interpretation of the 90s death metal sound.

Frontman Matti Way has a very wet inflection that is reminiscent of Demilich vocalist Antti Boman or Gorefest’s Jan-Chris de Koeijer (during the “Mindloss” era), but dialed up to-then-contemporary brutality standards. While tonally similar he lacks the emotive delivery of both, his range is the only redeeming factor. Way hardly, if ever, intonates (or properly articulates), and while undoubtly intense in a purely visceral sense, his cavernous vocals tend be one-dimensional at best. A Daniel Corchado or Craig Pillard he certainly is not. It could be argued that even Will Rahmer’s vocals are better. There are guest backing vocals by Deeds Of Flesh vocalist/guitarist Erik Lindmark on the album, but his shrieks offer little solace, and are fairly forgettable in the grand scheme of things.

While Disgorge categorically refuses to solo a good deal of the rhythm parts function as such. Benjamin Marlin provides the music with a throbbing backbone, but due to the unflattering production his funky licks are seldomly properly heard. Diego Sanchez’ playing style is very similar to that of Hill, and Remmen/Freithoffer. Despite two-thirds of the band being new recruits the Disgorge sound remained intact. “She Lay Gutted” follows the direction of the preceding demos closely, but increases the density levels and overall percussive thrust. “She Lay Gutted” doesn’t so much flow as it stutters, stomps and hammers, usually at a breakneck pace. Unlike fellow Californians Deeds Of Flesh, whose music usually comprised of various shifting riff schematics and tempo changes within a linear song structure, the music of Disgorge is mostly about concrete impact. 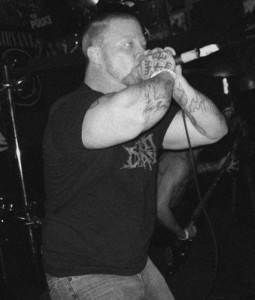 ‘Revelations XVIII’ is a thematical precursor to the next album “Consume the Forsaken”. The remainder of “She Lay Gutted”, as the title rather unsubtlely implies, revolves around supposedly shocking gore lyrically, and it is exactly as tired and trite as it sounds. None of the lyrics are particularly well-written, and others pile words, random sentences and half-thoughts together with no no sense of flow, narrative or even logical form. Some of these lyrics read as if they were penned by non-native English speakers. These banal exercises in shock are contrasted by the surprisingly well-written lyrics to ‘Revelations XVIII’, ‘False Conception’ and ‘Disfigured Catacombs’. Which lyrics were penned by Way, and which were a collaborative effort, remains yet to been.

At least Knoxville, Tennessee power trio Brodequin approached its matter-of-fact lyrics about torture techniques through history more intelligently. That isn’t to say that Brodequin’s lyrics were in any way more subtle or tactful. Said band’s descriptive approach fit well with its relentless assault. The disconnect between the opening track and the rest of the album is jarring to say the least. Most of the songs clock in under the three-minute mark, and the great majority of them sound underdeveloped at that. Only ‘Revelations XVIII’, ‘Exhuming the Disemboweled’ and ‘Sodomize the Bleeding’ can charitably be called actual songs. Thankfully, Disgorge would rectify this songwriting defect on its future releases making said records more tolerable in the process.

As a lot of death metal bands of the day Disgorge at no point attempts to infuse its music with a degree of evilness or hatefullness. The only songs that remotely try to capture the old death metal spirit are ‘Revelations XVIII’ and ‘False Conception’. Both tracks use a few brief eerie chord progressions, and its slow sections are effectively malevolent in spirit. The alternating growl-shriek vocals in the former are reminiscent of prime era Deicide. The chiming funeral bell and sampled thunderstorm that introduces the a capella conclusion in ‘Revelations XVIII’ is the farthest the record goes in establishing some and any kind of atmosphere. The compact double bass break in ‘False Conception’ offers a brief pause. ‘Womb Full Of Scabs’ was a re-recorded track from the 1992 “Cognitive Lust Of Mutilation” demo tape – that it sounds different from the rest of the album is expected, as it was written with a different rhythm guitarist and bass guitarist.

The essence of Disgorge as a band is the interaction between drummer Ricky Myers and rhythm guitarist Diego Sanchez. Both seem constantly at odds with each other which results in schizophrenic song structures that are all over the place compositionally but somehow never become incoherent. Benjamin Marlin (bass guitar) and Matti Way (vocals) are subordinate to the domination of the two principal players/songwriters, and as such their performances are merely adequate within the small window that they are allowed to work. As a result of the two main players constantly duking it out the Disgorge sound is completely bereft of both atmosphere and groove. It has neither the structural rigidness of Deeds Of Flesh, nor any of the Cannibal Corpse “The Bleeding” inspired hook/groove-laden writing that informed the first two Sepsism records. Matti Way’s defection would instigate the band’s lamentable tradition of having a different frontman for each subsequent record. The nearly constant revolving frontman position has kept (and continues to keep) Disgorge from unlocking its full potential as a collective, and reaching higher echelons within the industry. It is truly unfortunate.

“She Lay Gutted” was recorded, mixed and mastered in the death metal factory of the day Moon Productions in Arroyo Grande, California with Thomas E. Gingell producing. Gingell had engineered formative records by Deeds Of Flesh and Sepsism in the years before. To the album’s detriment the thick production does obscure many intricacies of Sanchez’ guitar playing, and buries, perhaps unintentionally, Marlin’s bass licks under Way’s cavernous and all-encompassing vocals. The drum tone isn’t too overly processed but it isn’t very defined either. At least there’s a distinct difference between the snares/toms and the kickdrums. Marlin’s bass guitar can be heard but isn’t allowed a lot of space within the mix. Although he mostly doubles the guitars there are interesting licks whenever the music ever so briefly allows. The artwork by then up-and-coming Texan tattoo artist Jon Zig was one of his better canvasses. Thanks to the commissioning of his work by both California institutions Disgorge and Deeds Of Flesh he would become the hot new artist for underground death metal bands across the globe. Zig’s work would come to define the early 2000s in North America and abroad.