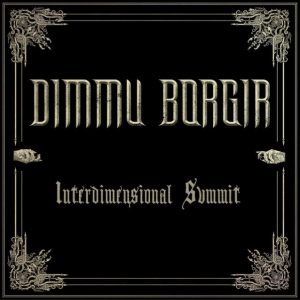 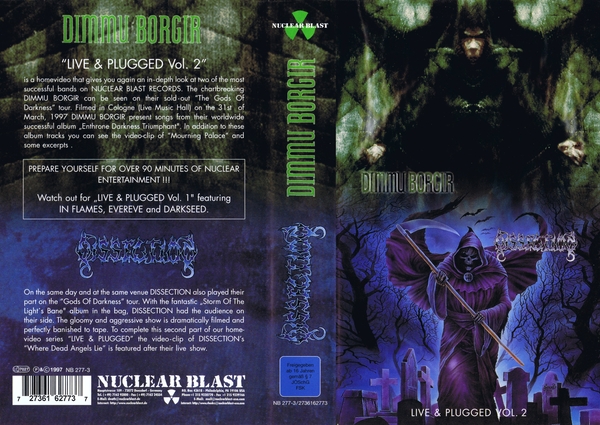 The “Live & Plugged” franchise was a shortlived home video series wherein German metal conglomerate Nuclear Blast Records sought to promote upcoming new signees through concert recordings and candid interviews. The series spawned a  total of two installments, and was discontinued upon the advent of DVDs as the popular storage format. The first installment included recordings of Darkseed, In Flames and Evereve on the German club circuit, whereas the second part coupled live recordings of Norwegian band Dimmu Borgir, and Swedish death/thrash metal titans Dissection as part of the shortlived “Gods Of Darkness” festival.

Recorded during the Gods Of Darkness Festival at Live Music Hall in Köln, Germany as part of “The Rape and Ruin of Europe” tour in 1997 supporting Cradle Of Filth, and co-headliners Dissection. Dimmu Borgir was the opening band for the tour, as In Flames at that point had a more established reputation as a melodic death metal band. Promising an “in-depth” look at each of the bands the video includes a professionally filmed live set, interviews, and each of the band’s official music videos. While the package at least delivers what it says on the tin, it is riddled with errors, major and minor, from front to back. The live portion of the package is the least problematic – the interview segments don’t offer up any new information that couldn’t be found through alternative means even back when this was released. The “Live & Plugged” video opens with Norwegian band Dimmu Borgir, and is followed by Swedish death/thrash metal outfit Dissection.

Even though Dimmu Borgir was lower on the bill than its Swedish peers Dissection, the Norwegians get to open the video on the strength of its divisive third album “Enthrone Darkness Triumphant”, its first for the label. The first notable error is that the highlight opening reel plays to “The Darkest Day” by composer David Arnold from the “Independence Day” movie soundtrack instead of a studio outtake of the band’s own songs. The opening segment sets the tone for the remainder of the home video. Being that Dimmu Borgir was at this point still a support act there are barely any lights during the show, and for the majority of its set the stage is underlit to say the least. Shagrath was still uncomfortable in the frontman position, and this leads to amateurish in-between song banter. The set itself is a representative cross-section of the band’s material up to that point, even though it curiously omits its earliest releases, specifically the meandering “For All Tid” and its lukewarm companion EP “Inn I Evighetens Morke”.

In the setlist only ‘Dodsferd’ and ‘Alt Lys Er Svunnet Hen’ represent the band’s pre-Nuclear Blast catalog. Understandably the set focuses heavily on the lamentable “Enthrone Darkness Triumphant”. “For All Tid” is ignored altogether. Only ‘Raabjorn Speiler Draugheimers Skodde’ appears in its re-recorded form during the end credits. Each of the members is enthusiastic and energetic, although drummer Tjodalv sometimes struggles to keep up during the transitions in new songs. During the many keyboard solos, the top-hatted Stian Aarstad can be regularly seen staring blankly into space. The interview hardly justifies its inclusion as it offers up nothing novel (even this early in the band’s career), and its needlessly breaks up the flow of the live set. Stian Aarstad and Tjodalv don’t appear in the interview segments at all, and Shagrath only appears sparsely. Not a lot of care was put into this part of the video, as at one point Nagash is missspelled as ‘Naqash’ during the interview segments. Dimmu Borgir’s part of the video is concluded by the promo video for ‘Mourning Palace’ which mixes live footage of the concert the viewer just saw with stock war footage.

During the Dissection part ‘At the Fathomless Depths’ is played over the opening credits, why another David Arnold composition from the “Independence Day” soundtrack wasn’t used here is anybody’s guess. Tobias Kjellgren substituted for Ole Öhman on drums for the “Storm Of the Light’s Bane” touring campaign. The band plays a representative selection of its two albums, but also includes ‘Elisabeth Bathory’, a cover of Hungarian black/thrashers Tormentor – and ‘Son Of the Mourning’, an old demo song that never appeared on any of its official albums, as part of its set. The band deliver an energetic set with enlived performances from each of the members. bass guitarist Peter Palmdahl, and substitute drummer Tobias Kjellgren are subjects for the interview instead of Jon Nödtveidt, the actual frontman, lyricist and creative force behind Dissection. In fact Jon Nödtveidt, and Johan Norman don’t appear in the interview segments at all. The Dissection part of the home video is concluded by the promo video for ‘Where Dead Angels Lie’, which on the backsleeve of the video is misspells as ‘Where Dead Angles Lie’.

On all fronts the Dissection segment of the live recording is the superior shot of the two productions. Given the band’s bigger profile at the time (the band co-headlined with British dark metallers Cradle Of Filth, with support coming from Swedish then-melodic death metal band In Flames and Dimmu Borgir) it is not entirely unexpected that they were given a better stage sound and lightshow. Likewise does Dissection receive better filming and editing. Most members share equal screentime, only rhythm guitarist Johan Norman is often ignored in favor for lead guitarist Jon Nödtveidt. It’s apparent that Dissection on all fronts was a better-oiled machine and a tightly-knit unit compared to Dimmu Borgir’s semi-amateuristic showing on the same festival.

In all it was understandable that Nuclear Blast decided to scrap the “Live & Plugged” series at the dawn of the DVD format. Its contents and the dubious quality of the interviews did not justify the existence of the franchise. For what it attempted to accomplish “Live & Plugged” was functional at the very least. It was a budget line alternative to dedicated, single-band live recordings that offered a bit of everything for the casual fan. In light of the advent of widely-spread live recordings it was virtually inevitable that “Live & Plugged” was bound to become redundant, which it did. With the live aspect as its primary selling point the video has nothing resembling worthwhile additional footage. “Live & Plugged” was good for what it intended, but ultimately the brand didn’t proof resilient and strong enough to warrant further revisits.