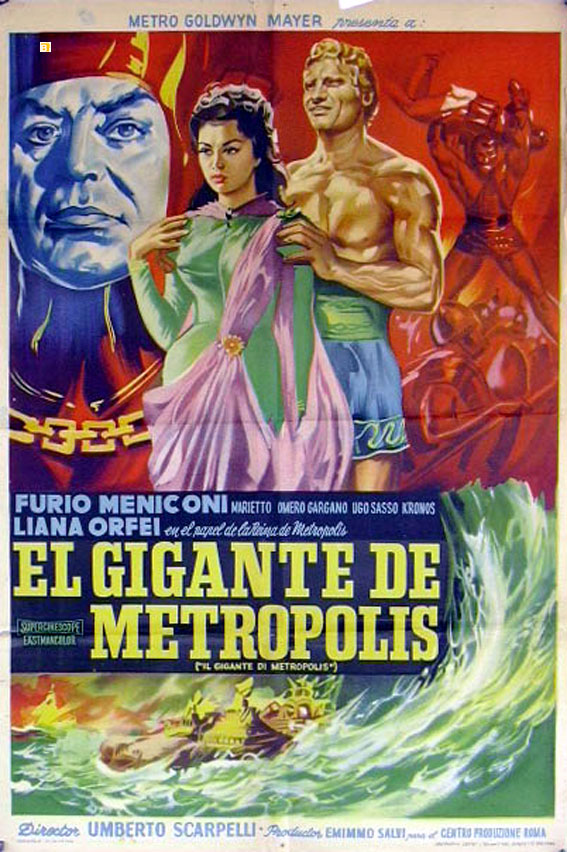 In all likelihood The Giant Of Metropolis is one of the greatest peplum-science fiction hybrids from the legendary first wave of the Italian sword-and-sandal genre. As one would guess from the title it merges the two central conceits from Eugène Lourié’s The Colossus of New York (1958) and Fritz Lang’s Metropolis (1927) with lush production design by Eugenio and Mario Bava protégé Giorgio Giovannini and starring roles for Gordon Mitchell, Roldano Lupi as well as Liana Orfei and Cuban belle Bella Cortez. The Giant Of Metropolis begat The Conqueror Of Atlantis (1965) which in turn inspired Luigi Cozzi from everything to StarCrash (1979) and his two Hercules movies with Lou Ferrigno. Everything has a beginning – and while Atlantis in the desert had been done earlier in the form of The Mistress Of Atlantis (1932) and Journey Beneath the Desert (1961) – both based on the 1920 Pierre Benoit novel Atlantida/L’Atlantide – The Giant Of Metropolis was one of the crazier exercises to follow in the footsteps of Pietro Francisci’s The Labors Of Hercules (1957), the first genuine kitschy pulp peplum.

The director of The Giant Of Metropolis was Umberto Scarpelli. Scarpelli worked as an assistant director on 17 movies from 1933 to 1951. From 1941 to 1954 he was employed as a production manager, mostly on comedies, dramas and romances. In the 18 years from 1943 to 1961 Scarpelli co-directed four productions and as a writer he had established himself with David and Goliath (1960), and Fury Of the Barbarians (1960). That The Giant Of Metropolis is his only directing credit that is truly his own should speak volumes. Scarpelli wasn’t exactly a good or particularly talented director. The Giant Of Metropolis was the first Italian production for American strongman Gordon Mitchell and Bella Cortez had crossed paths with Furio Meniconi, Roldano Lupo, and Liana Orfei earlier in The Seven Revenges (1961) and The Tartars (1961) earlier. If The Giant Of Metropolis is remembered for anything it’s the production design by Giorgio Giovannini and the special effects work from Polish surrealist painter Joseph Natanson. Natanson had worked with everybody from Vittorio De Sica, Sergio Leone, Pier Paolo Pasolini, and Franco Zeffirelli to John Huston, Joseph Mankiewicz, Jean-Jacques Annaud, but also exploitation kings as Luigi Cozzi and Lucio Fulci. That producers were going to capitalize on the on-screen pairing of Mitchell and Cortez resulted in the Emimmo Salvi directed Vulcan, Son Of Jupiter (1962) a year later. 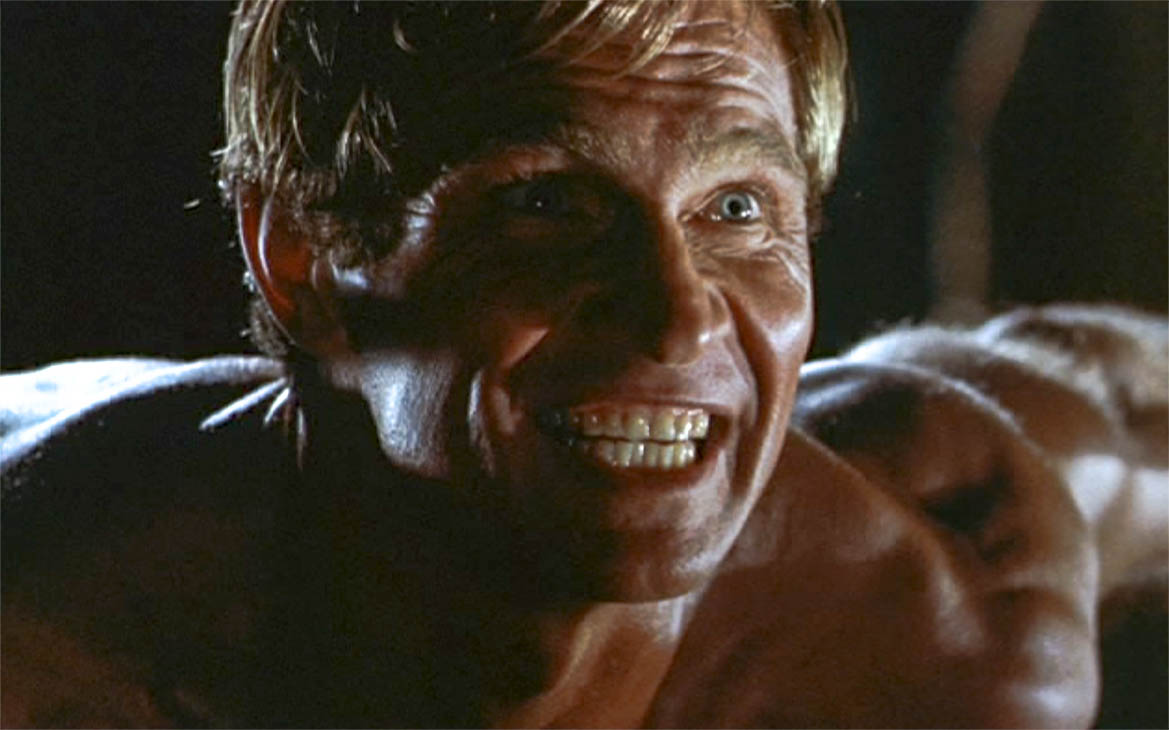 In 20,000 B.C in an unspecified unhospitable desert landscape a group of men is traversing until the elder (Mario Meniconi) expires from exhaustion and old age. He orders his son Orbo (Gordon Mitchell) to travel beyond the mountains and into the city of Metropolis in the heart of Atlantis and issue a dire warning that they “shouldn’t try to change the natural order.” Within the span of just a few minutes his former travelling companions turn on him as their allegiance was to the elder and not much later Orbo’s brothers are killed by an electro-magnetic blizzard that will later be called “the Whirlwinds of Death.” Orbo is taken captive by the Black Guard and its captain (Ugo Sasso) brings him before their iron-fisted ruler. Metropolis is presided over by Yotar (Roldano Lupi), an implacable arch-rationalist who has dedicated his life to the pursuit of knowledge and conducting experiments to attain immortality, the closest thing to actual godhood.

Yotar envisions to transplant his the brain of his 200 year-old father (Carlo Tamberlani) into the body of his pre-teen son Elmos (Carlo Angeletti, as Marietto). In other words, The Giant Of Metropolis can pride itself for having a brain transplant a full decade before Lady Frankenstein (1971) and two before Zombie Holocaust (1980).  He is advised by the Prime Minister (Ugo Sabetta) and his sage, corpse-like scientist elder (Luigi Moneta) and Yotar even goes as far as to revive his former science lieutenant Egan (Furio Meniconi) to get validation that his experiments are just. One and all they warn him of the possibly cataclysmic consequences of his experiments. The arrival of strongman Orbo only adds to his resolve as the musclebound hunk of flesh defies any and all scientific data the Metropolis engineers had collected by that point. Orbo is an genetic anomaly that Yotar and his legion of scientists need to study and experiment for the betterment of all. 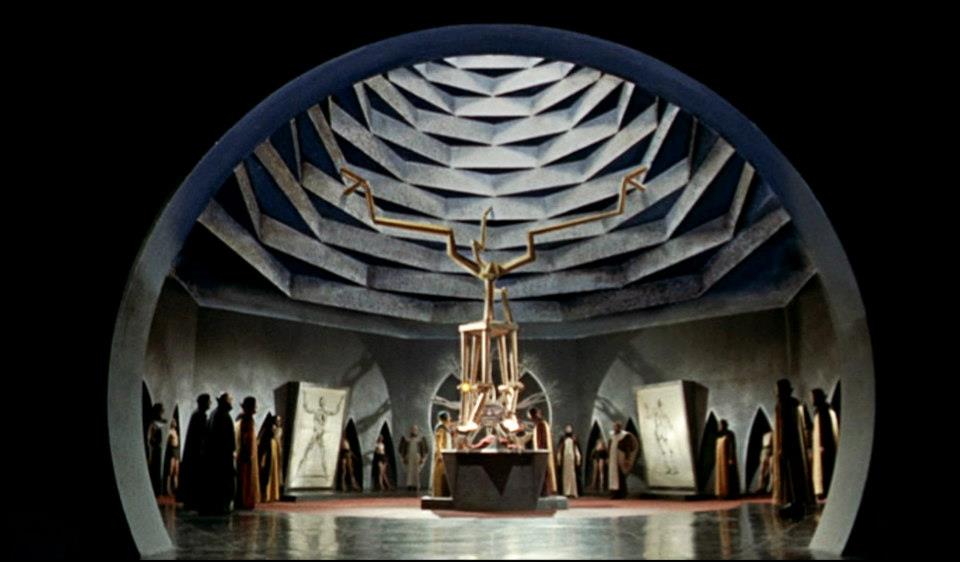 Within the palatial chambers discord and distrust is growing. Queen Texen (Liana Orfei) and Egan conspire against Yotar by freeing Orbo from bondage. Princess Mecede (Bella Cortez) is initially reluctant to join the insurrection as she’s torn between loyalty to her father and her attraction to the madly babbling desert muscleman. It isn’t until Texen commits suicide by poisoning when confronted by Yotar that Mecede chooses sides. Meanwhile Yotar continues his scientific experiments apace despite Orbo’s ominous warnings. Orbo is forced to guerrilla tactics and shorts bursts of warfare when his dire warnings fall on deaf ears. Yotar, understandably, retaliates by trying to contain the rapidly escalating situation through brute force. However Orbo is nothing the Metropolitans have ever experienced before and Orbo’s persistence forces Yotar into increasingly desperate means of repression to quell the opposition. Means that will eventually spell the fall of Metropolis and fulfill the very same prophecy that Orbo was send to warn him against. By not heeding the cryptic warnings of a primitive, desert-dwelling doomsayer as the most serious thing in the world, Yotar has ensured that his “amazingly advanced civilization” will forever be “lost beneath the waters of the ocean.” 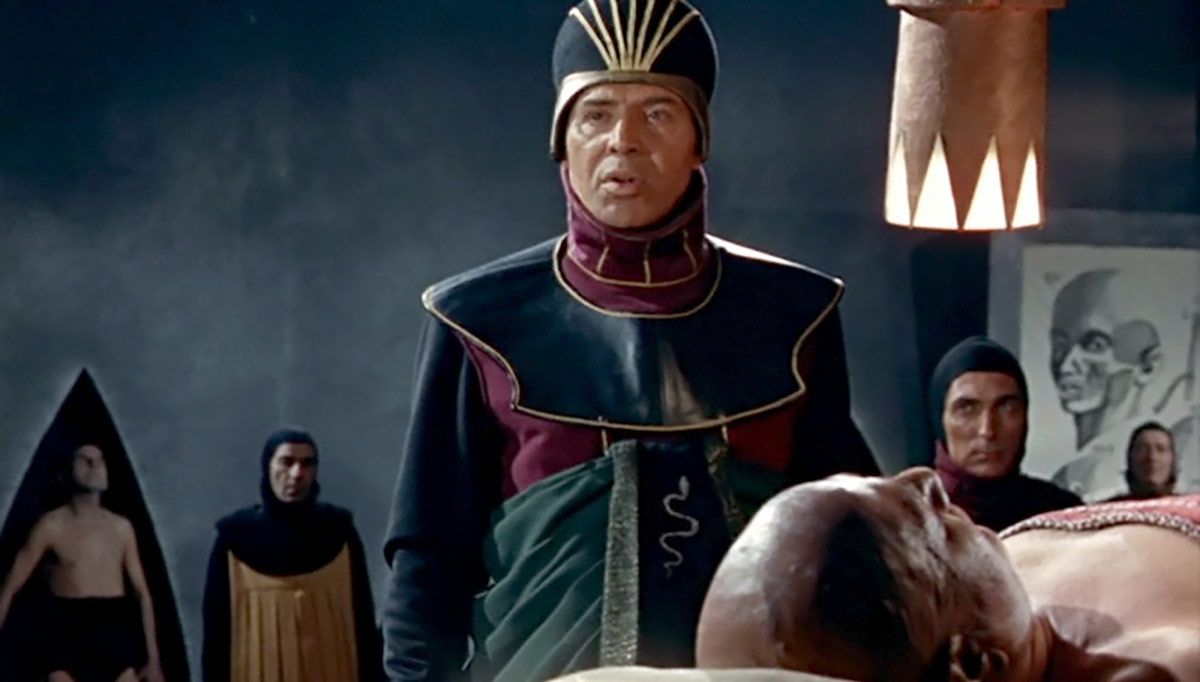 How is it possible that with a team of five writers and another two contributing dialogue that the screenplay for The Giant Of Metropolis is such a staggering mess that it barely qualifies as a three-act story and fails to set up the most important characters? It starts with an opening crawl that conveys the necessary background information for the story, but it also gives away the ending and thus kills any and all possible suspense. None of the lead characters, with exception of Yotar, are properly introduced. A majority of supporting characters, irrespective of their overall importance, remain unnamed through out. The Metropolitan society is obviously divided into various classes (scientists, clerics, defense), but none of the hierarchy is given proper explanation and the only way to differentiate between them is the costumes. The screenplay also never truly decides who the point of view character is supposed to be. Orbo is the designated hero of the piece, but he’s quickly reduced to a bystander in what is supposedly his story, and Yotar by sheer necessity becomes the point of view character. Yotar endlessly consults and confers with a series of faceless advisors, only to remain deadly passive. It’s certainly a problem when Liana Orfei and Bella Cortez portray far more internally conflicted characters than Roldano Lupi, somewhat of a specialist in despotic foreign tyrants, and supposedly the main antagonist. Orfei and Cortez far more interesting as such but their roles are merely supportive and don't carry the same narrative weight. 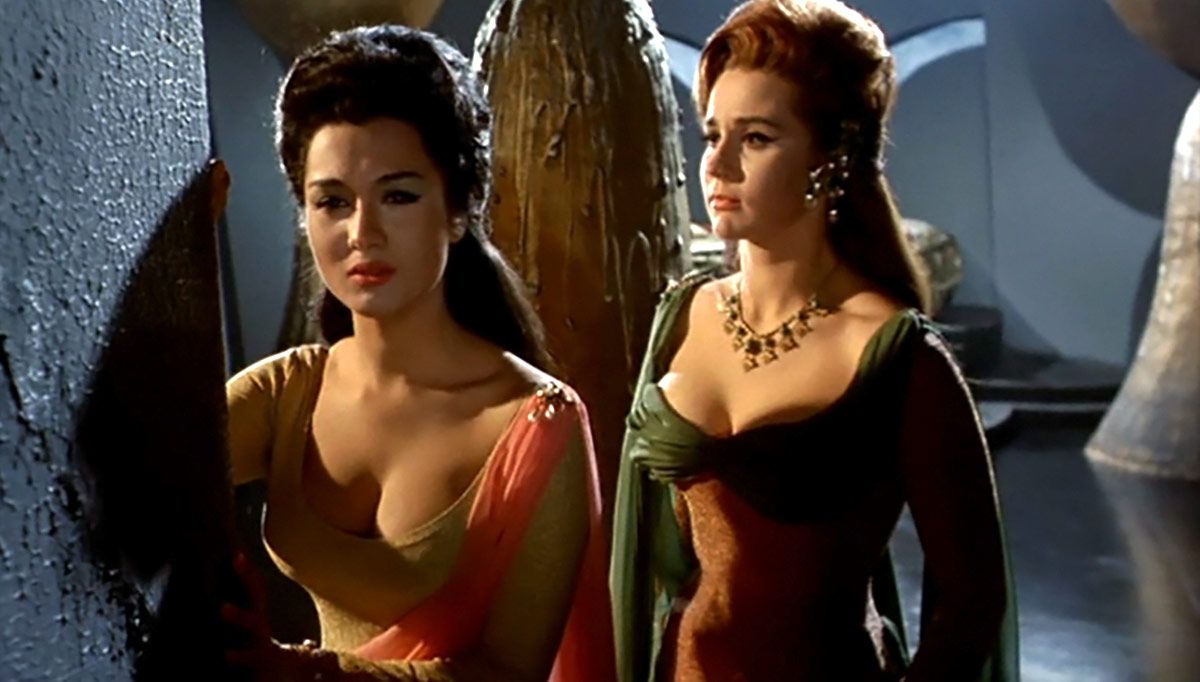 What is also clear is that Sabatino Ciuffini, Ambrogio Molteni, Oreste Palella, Gino Stafford, Emimmo Salvi, and Umberto Scarpelli were a bunch of staunch Catholics. Orbo is, by prophecy and destiny, a desert-dwelling messiah foretold to bring down the great house of Metropolis and liberate mankind from the dire oppression of scienctific progress and the grand pursuit of knowledge. It requires of Yotar, just like Abraham in the Old Testament, to sacrifice his only begotten son in the name of ‘science’ – and strikingly, Metropolis or Atlantis, a den of godlessness and decadence, is swallowed by the sea. Just like God punished mankind with the Great Flood for its disobedience. The Giant Of Metropolis pushes its message of anti-intellectualism hard, as it gives Orbo several occassions to proselytize with grand declarations as, “Your power is based on a criminal use of science. it will destroy you! You will die miserably” and “Perhaps, before we are destroyed, Yotar will realize he has been mistaken. He's not evil. He's only blinded by science.” In age-old Christian tradition women are men’s property and supposed to be submissive. Something which Liana Orfei’s Texen won’t stand for, rebuking Yotar’s “you’re in my power” speech with, “You desire only to possess my body. And you want to destroy every vestige of my will. But I refuse to let you, Yotar. I loath you!” Likewise does Yotar have an incestual longing after his teen stepdaughter played by Bella Cortez.

While the screenplay has its share of problems, big and small, the outlandish production design is some of the most exquisite you’re likely to see in what by all accounts is an Italian exploitation cheapie from the sixties. The sets, miniatures and matte paintings were rendered by Giorgio Giovannini, a protégé of celebrated domestic filmmakers Eugenio and Mario Bava. The locations alternate between wide, spacious, geometric spaces with sparse columns, angular pieces of technology and underlit cavernous subterranean chambers. The Metropolitan palace interiors, often in bright pastel colors, fuse Aztec and Terracotan designs and motifs. In others chiseled faces protrude from walls and stalagmites form centerpieces of barren and desolate chambers. Furniture is sparse with only the king being given the luxury of chairs. In an instance of incredible prescience a building at the center of the royal court resembles the Android mascot. 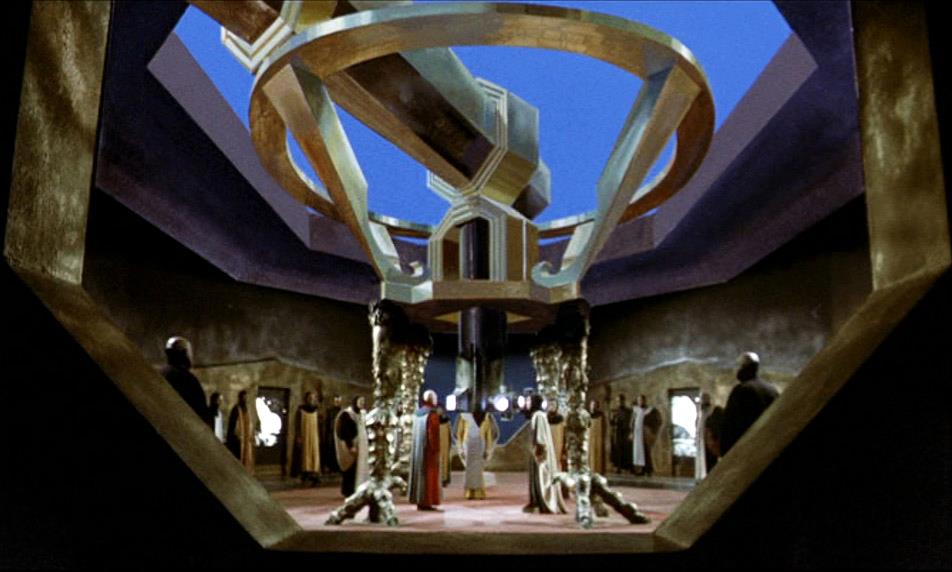 The production design would be imitated in Mario Bava’s science fiction classic The Planet Of the Vampires (1965) and Dino de Laurentiis’ Dune (1984). The influence of Bava, the elder and the younger, can be seen through the brightly colord atmospheric lightning and liberal use dry ice. The costumes by Giovanna Natili are both uncomfortable and impractical and are much a monastic habit as they are prescient of The Planet Of the Vampires (1965). The weaponry are strangely formed,  leaflike reconfigurations of large, plastic feather dusters and large ornamental fans. To have such exquisite production design wasted on what amounts to a glacially paced potboiler low on both action and thrills is unfortunate to say the least. What kills The Giant Of Metropolis the most of all is the flat and ugly cinematography that doesn’t capitalize on the wonder and spectacle of the production design. The editing is equally infuriating as it contains endless inconsequential scenes of people shuffling in and out of rooms and never builds towards a climax. Likewise does the portentous, minimalist, almost atonal score from Armando Trovajoli - rife with clarinet, piano, theremin - not help at all. 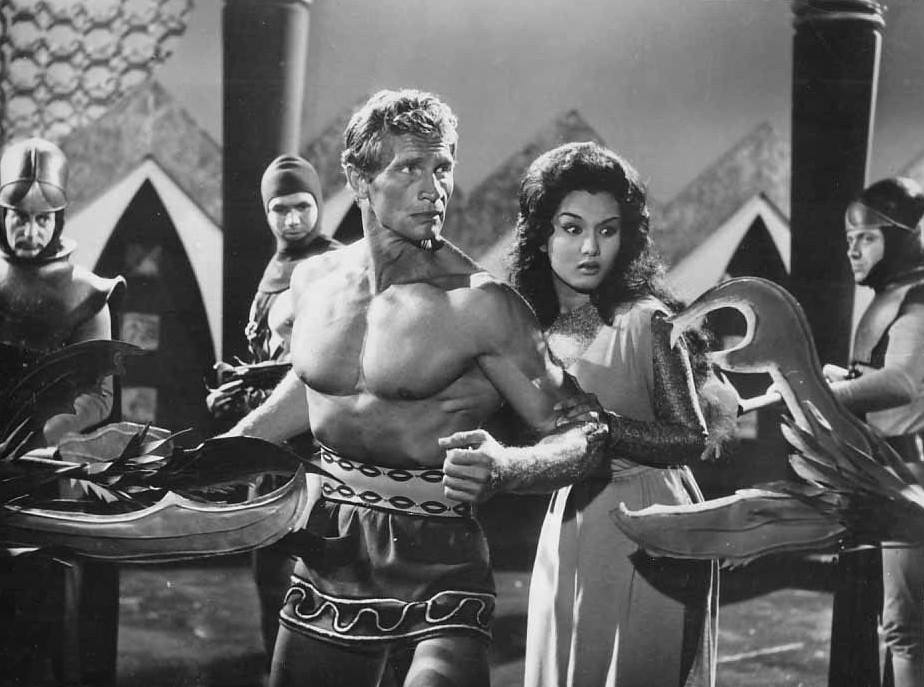 The Giant Of Metropolis is first and foremost a vehicle for Gordon Mitchell’s bared oiled chest. Liana Orfei and Bella Cortez steal the show in every scene they’re in, but unfortunately never bare theirs. Orfei sports a few very flattering dresses and veils and in her most memorable scene wears but a bikini. Bella Cortez is initially introduced as Yotar’s somewhat mousy daughter, but only becomes a character after her prerequisite exotic dance routine. Orfei would get her own dancing routine in much better peplum productions as Hercules, Samson and Ulysses (1963). Had The Giant Of Metropolis been helmed by a better director and with a tighter, more succinct screenplay it could have been one of Italy’s most memorable genre-hybrids. The Giant Of Metropolis is a historic curiosity that no cult movie fanatic should be without. It’s everything that Alfonso Brescia’s The Conqueror Of Atlantis (1965) was but infinitely better realized, at least from a production design standpoint, and far more brooding all around. It’s a highpoint of Italian peplum exploitation and it wouldn’t be until Luigi Cozzi’s two Hercules movies two decades later that something quite as crazy would surface. For that reason it’s a towering achievement of exploitation filmmaking at its finest.