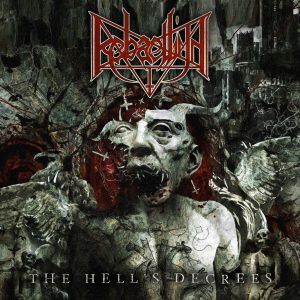 The return of Brazilian death metal hopefuls Rebaelliun was unexpected, but understandable considering how they fizzled out in wake two strong albums, and a highly proficient membership that was willing to go great lengths to succeed. “The Hell’s Decrees”, a name directly lifted from a song of its 1999 debut “Burn the Promised Land”, sees the return of the quartet after a 15-year layoff. The follow-up to 2001’s “Annihilation” is the logical evolution from its debut, and adds a degree of sophistication to its otherwise typically blistering South American assault.

Prior to forming Rebaelliun, Fabiano, Penna Correa and Lima were part of local force Blessed. During the plus decade that Rebaelliun was inactive, Fabiano Penna Correa (lead guitar) released two albums with The Ordher, and Sandro Moreira (drums) released albums with Mental Horror and, more recently, Exterminate. Sensing some unfinished business in the past the men eventually reconciled and set to record “The Hell’s Decrees”. Despite a 15-year break in between albums “The Hell’s Decrees” has all the confidence, flow and sense of unity sounding as if Rebaelliun never split in the first place. 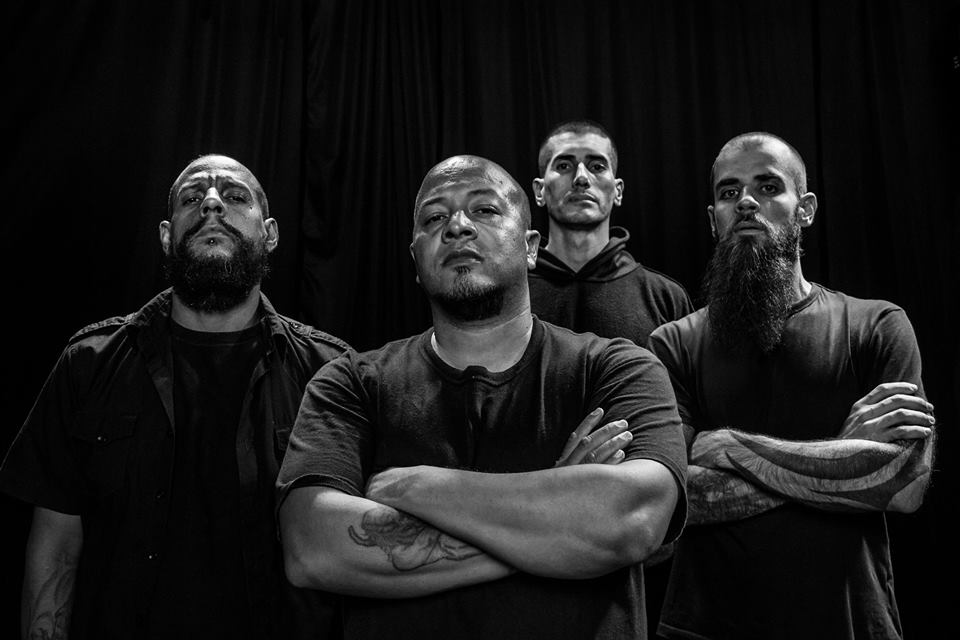 Opening cut ‘Affronting the Gods’ has a closing solo that bears some striking resemblance to those in ‘Triumph Of the Unholy Ones’ from “Burn the Promised Land”. ‘Legion’ sounds more Morbid Angel than Morbid Angel does itself these days. ‘The Path of the Wolf’ comes the closest to “Annihilation”. ‘Fire and Brimstone’ could have been a song of “Weaponize” or “Kill the Betrayers”, the two albums from Penna Correa’s post-Rebaelliun project The Ordher. The short burst riffing in ‘Rebaelliun’ recalls ‘Kings Of the Unholy Blood’ from the “Bringer Of War” EP. ‘Dawn Of Mayhem’ bears some slight resemblance to local force Exterminate. ‘Crush the Cross’ the retakes the closing section of “Burn the Promised Land” song ‘Hell’s Decree’. Closing track ‘Anarchy (The Hell’s Decrees Manifesto)’ references a drum pattern from ‘Hell’s Decree’ from “Burn the Promised Land” in its first minute and during the final solo the lead from ‘…And the Immortals Shall Rise’ of its 1999 debut is referenced.

A good portion of the riffing and chord progressions during the slower sections on “The Hell’s Decrees” are reminiscent of The Ordher more than any of Rebaelliun’s earlier work. It’s only natural that Penna Correa’s and Lima’s riff construction would change in the 15-year layoff in between the second and this much protracted third album. For all intents and purposes Sandro Moreira is a more accomplished percussionist than Max Kolesne (Krisiun) or Ariadne Souza (from the greatly underrated Valhalla). Slayer and, to a lesser degree, prime era Morbid Angel remain Rebaelliun’s main influences. The Morbid Angel influence can be heard in the trudging midpaced opening to ‘Legion’. Since “Annihilation” Rebaelliun has shed most of its melodic inclinations and overt Krisiun imitation. “The Hell’s Decrees” is the first Rebaelliun album to be its own distinct entity. Lohy Fabiano’s belched, low register vocals are closer to those of Marcello Marzari on the debut.

“The Hell’s Decrees” isn’t necessarily higher-paced than any of the band’s prior work, but in writing it lies closer to “Burn the Promised Land” than to “Annihilation”. Isolated passages of songs are reminiscent of the “Bringer Of War” stopgap EP that separated both albums. One of the greatest flaws of “Annihilation”, in terms of writing, was that it pushed the band’s sound to its logical extreme. Unlike “Annihilation” this third album isn’t primarily fast, inhuman speed is no longer its primary objective. “The Hell’s Decrees” embraces the same songwriting breadth that characterized its debut. In being more deliberately paced “The Hell’s Decrees” sidesteps the architectural shortcoming of its 2001 album. At this juncture Rebaelliun is more artistically relevant than populist institution Krisiun.

For the third Rebaelliun much of the production was kept in-house. The vocals were recorded at Blue House Studios. The guitars and bass guitar were recorded at El Diablo Studio with Fabiano Penna Correa producing, whereas the drums were recorded at A Torre Studios. “The Hell’s Decrees” was mastered at Absolute Mastering by Neto Grous. “The Hell’s Decrees” combines the crunch of the “Bringer Of War” EP with the instrumental clarity of “Annihilation”. It is tonally closer, but ultimately superior, to the Exterminate album “Burn Illusion” – especially in its organic drum tones. The only criticism that could be levelled at it is that it, despite its obvious auditory sheen and gloss, misses some of the concrete heft and body of “Burn Of the Promised Land”

In keeping with modern conventions Rebaelliun allocated artwork by fellow Brazilian Marcelo Vasco, who over the last few years has done high-profile work for Belphegor, Dark Funeral, Horncrowned, and more recently, Slayer. Instead retaining continuity with its prior album and hiring Polish artist Jacek Wiśniewski again the band opted, understandably, to make “The Hell’s Decrees” its own distinct entity. Even though the album is littered with subtle, and not so subtle, references to past efforts – it clearly has a character all its own: rugged, flawlessly paced and singular in its objective of masterfully crafted songs. No longer Rebaelliun can be accused of being a Krisiun clone. 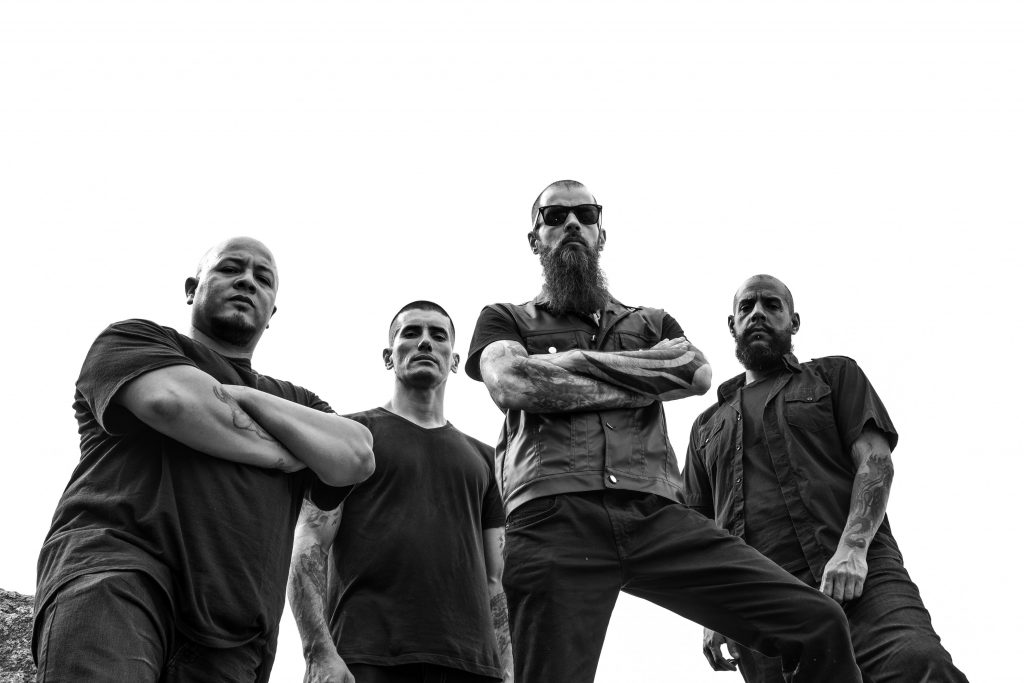 As far as these reunions go Rebaelliun comes out of mostly unscathed and with their integrity intact. That they aren’t the same band as 15 years ago seems only logical, and the influence of Penna Correa can be construed as beneficial or detrimental, depending on your preference of his post-Rebaelliun projects. The visual and production aspect of “The Hell’s Decrees” is contemporary but not overbearingly so. There’s an analog warmth and grittiness to “The Hell’s Decrees” that many modern genre albums lack. As such its closer linked to “Burn the Promised Land” than any of its later output. The record doesn’t aim to reinvent the genre, but puts it traditional aesthetics into a modern framework. South American death metal fans can’t go wrong with this. 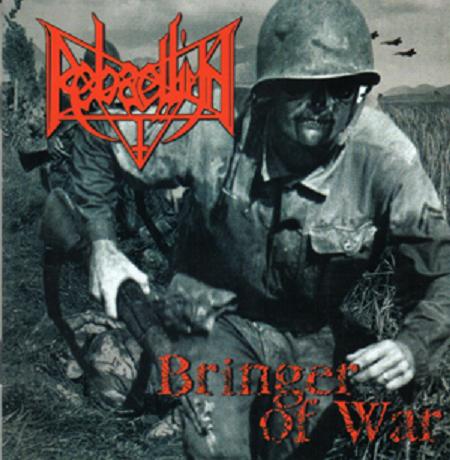 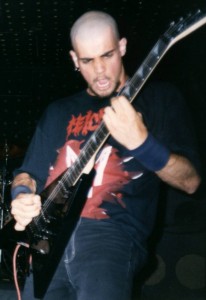