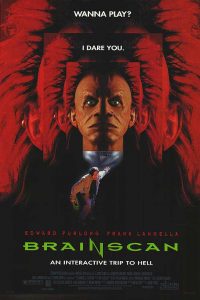 It is well established that the 90s were a particularly dark decade for the horror genre. Horror descended into nothing but overly comedic, self-aware, and pretentious genre deconstructions that abided by the same conventions they were supposedly mocking. In other words, Wes Craven’s Scream (1996) happened. Two years before, however, there was a Canadian production that commented in a similar condescending, moralizing, holier-than-thou tone on the vices and youth counterculture of the day: heavy rock music, horror cinema and/or violent video games. Brainscan, for all its 90s cultural sensibilities that ultimately end up defanging it, is actually a surprisingly effective little genre effort is one is willing to meet it halfway. It never quite pushes the envelope the way you would want it to, but it tries. It is far more intellectually honest than Craven too.

Michael Bower (Edward Furlong) is a typical 90s social pariah, a product of childhood trauma and parental abandonment. Bower lost his mother in a roadside collision that left him with a nasty scar and a limp as reminder, and an absentee businessman father. Having never properly dealt with the loss of his mother and spoilt rotten by his overcompensating absentee father Michael is a socially handicapped doofus that immerses himself in ungodly amounts of heavy metal, horror, and video games as a cry for someone, anyone, to love him. If only that someone would be Kimberly Keller (Amy Hargreaves), who he surreptitiously spies on in ways that the Twilight novel (2005) and its subsequent screen adaptation (2008) would enshrine as the apex of romance. When his only friend Kylie (Jamie Marsh) reads him an ad in Fangoria about Brainscan, a literal murder simulator, Michael’s interest in piqued. As a seasoned veteran of all things weird, one that has “seen it all, played them all” Brainscan offers an experience like no other. When a murder committed in the game occurs in the real world, Michael’s life starts to unravel, and before long he fears of losing possession of the one thing he still has control over, himself. All the while detective Hayden (Frank Langella) is investigating the murder case. The more Brower plays Brainscan the more the gameworld and his own bleed together. With only the macabre and devious Trickster (T. Ryder Smith) as his guide only one question remains: what is real, and what is not? 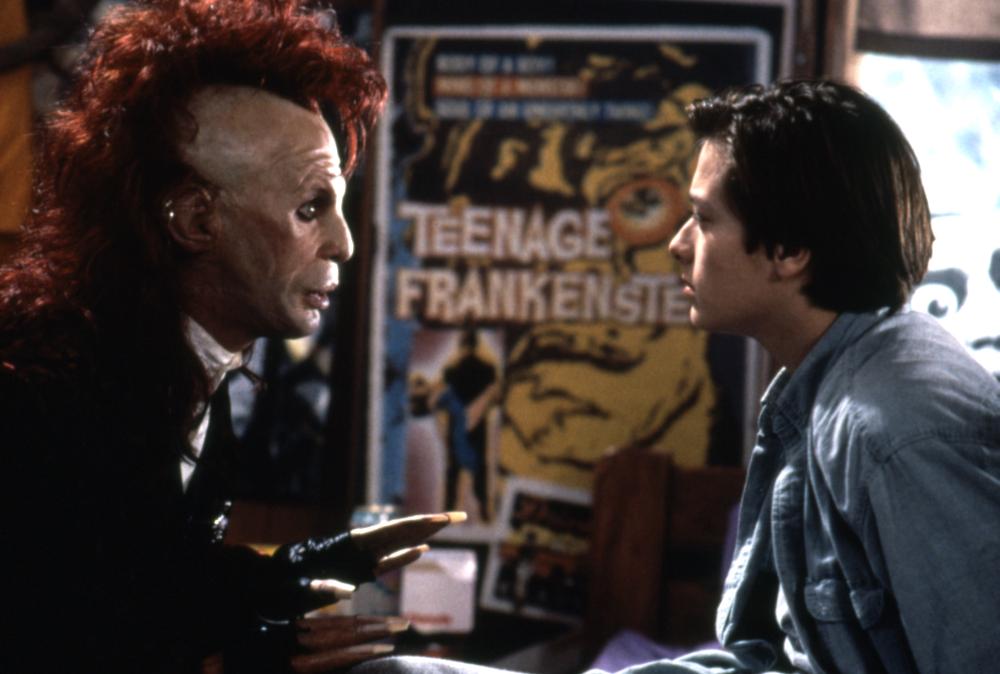 Brainscan very much wants to be a horror movie for people who don’t like horror movies. Figures of authority, specifically principal Fromberg (David Hemblen), at one point or another, voice their disapproval of Bower’s extracurricular interests. Likewise does Walker’s script demonize Michael for engaging in videogames and horror by making him a social outcast and forcing him into murdering his friends as punishment. Since Brainscan is a thriller masquerading as a horror-movie-with-a-message Michael needs to have the prequisite love interest which is where the underutilized Amy Hargreaves comes in. Hargreaves, who was in her mid-twenties, has a few scenes of implied nudity – but since this was released in 1994 and more of a thriller that will be the extent of what is deemed permissable. Once Brainscan is done moralizing it rewards Michael with a fresh view on on life, the possibility of Kimberly as a girlfriend (she shows reserved interest, and never outright declines his advances) while pushing the Trickster to the back as a mere video game host. It even gives complete cipher Kyle a girlfriend in Stacie (Michèle-Barbara Pelletier). The rank hypocrisy of Brainscan’s screenplay knows no bounds. 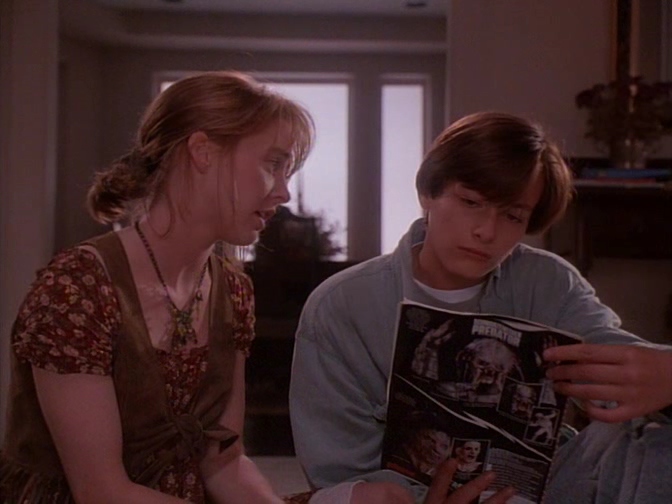 For all the things it does right Brainscan shortchanges itself by abiding to the sanitization the horror genre was subject to in the 90s. There are but two slayings that occur over the course of the movie, one of which happens offscreen. After the wild 1970s and the excesses of the eighties, the 90s pushed horror into the self-reflective, self-referential, and the comedic. As horror became shunned and considered a non-legitimate genre, many movies referred to themselves as thrillers instead to avoid the stigma. Brainscan both wants to be a horror movie all while disassociating itself from the genre at every turn. The ambiguity of Brainscan, and the ambivalence of its screenplay, ultimately work against it. There’s nary a drop of blood anywhere in Brainscan, and it is completely bereft of nudity, the very things that horror was decried for in the decades prior. It will have its protagonist showing León Klimovsky’s gothic horror potboiler The Dracula Saga (1973) to the Horror Club attendees, but then will have Michael sarcastically refer to it as Death, Death, Death, Part II just to spite the principal. To its credit at least the makers of Brainscan knew their Mediterranean Eurocult classics, Spanish or otherwise.

Brainscan is also custodian to one of the greatest 90s horror villains, the enigmatic Trickster. In the gameworld the Trickster acts as a master of ceremonies, and with his red mohawk skullet the long-nailed, sharply dressed apparition comes off as a combination of a pre-Hellraiser III: Hell On Earth (1992) Pinhead, a heavy metal frontman, and a 1970s gothic horror villain complete with the snark of earliest Freddie Krueger. In short, the Trickster is the embodiment of the darkness of whoever plays the game. The screenplay never reveals exactly what the Trickster is; whether he is a spectral manifestation of the player’s vices, or the physical incarnation of a sentient program. T. Ryder Smith revels in playing up the red mohawked fiend’s ambiguous loyalties. The Trickster is for the nineties what Freddie Krueger was for the eighties. In a delicious slice of life imitating art T. Ryder Smith ended up lending his voice talents to video games Manhunt 2 (2007), BioShock (2007), BioShock Infinite (2013) and its DLC expansion pack Burial At Sea (2014). The Trickster has done well for himself. 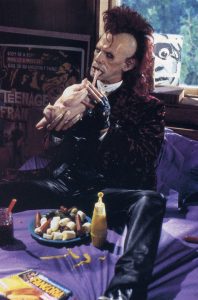 The screenplay was written by Andrew Kevin Walker, later of Se7en (1995) and 8MM (1999) fame and a script doctor on The Game (1997), Stir Of Echoes (1999) and Fight Club (1999). Walker’s screenplay tries very hard to pass Brainscan off as an adolescent version of The Lawnmower Man (1992), or similarly themed David Cronenberg movies as Videodrome (1983) or ExistenZ (1999) without any of the body horror or pathos. The script’s cardinal sin is that it is never follows up on what it promises. It puts its protagonist in a literal murder simulator (exactly what certain detractors called videogames at the time) and exacts swift punishment by having him murder his best friend and love interest. The role of Trickster starts out as a guide for Michael in the gaming world only to turn him in a Freddie Krueger styled antagonist since the script lacks a real opponent to square him off against. Michael defeats Trickster in the gameworld, but the sequence is rendered moot as Trickster materializes in the corporeal realm where Michael can see him in the event of Brainscan becoming profitable enough to warrant a follow-up. Thankfully, the essence of Brainscan remains untarnished by unnecessary sequels.

Frank Langella and Amy Hargreaves do their best with the little they are given to do. Langella is the closest thing to an antagonist during the first half whereas Trickster becomes the antagonist during the second half. Hargreaves is given little else to do besides looking misty-eyed, pouting, or strutting around in lingerie. For reasons that will remain largely unexplained, Kimberly shows reserved interest in Michael at the end. Hargreaves has the prettiest smile but there isn’t an inkling of chemistry between her and Furlong, who by this point had perfected his troubled youth shtick. Hargreaves’ character is of no significance, and much of the running time Kimberly is a complete nonentity until Furlong’s character arc requires a Hollywood-mandated love interest. Langella and Hargreaves maintained a steady career in television and movies while Furlong fell into obscurity due to his puzzling professional choices and a private life that matched Lindsay Lohan’s in sheer dysfunctionality and drug abuse. All the promise that Furlong showed early on in the Aerosmith music video ‘Livin’ On the Edge’ and James Cameron’s blockbuster Terminator 2: Judgment Day (1992) was squandered all too quickly. The career revival that American History X (1998) and the Metallica music video ‘The Unnamed Feeling’ lend Furlong failed to cement his potential as an actor. 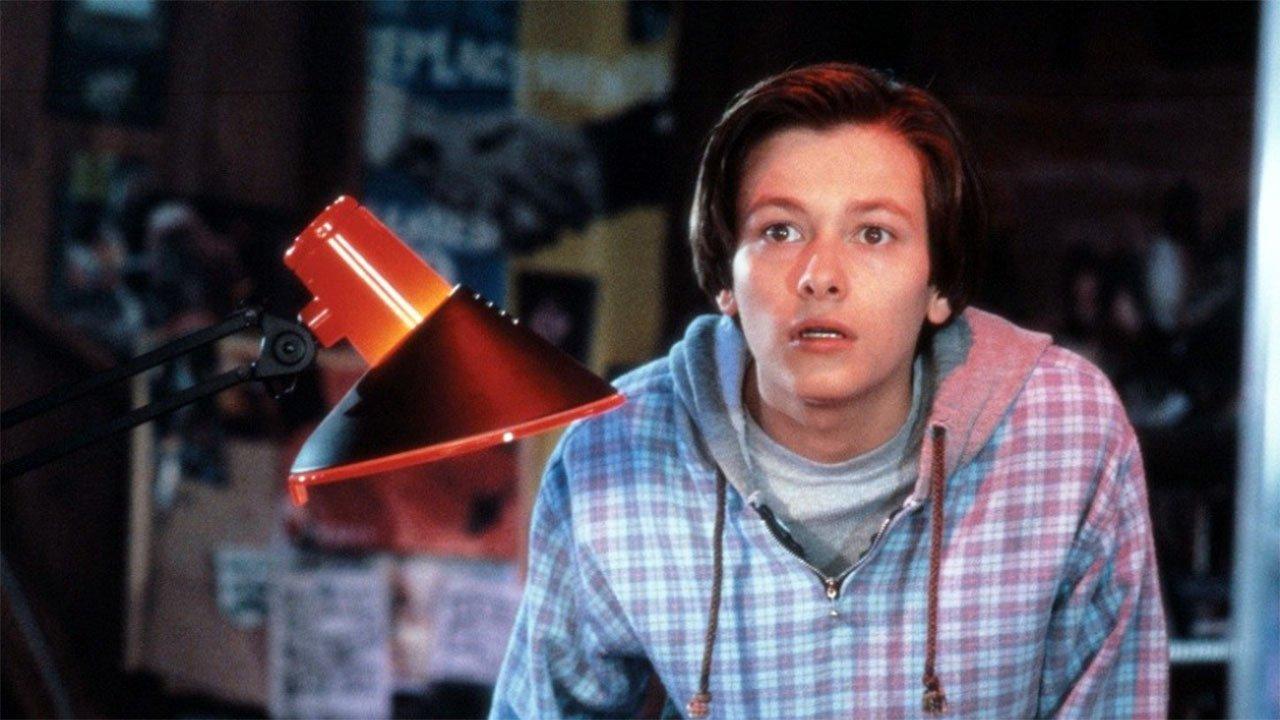 As a product of its time Brainscan is both frustratingly middle of the road and agonizingly afraid of its own implications. Lacking in both scares and grue it’s exactly the sort of thing Hollywood would try to pass off as genuine horror. Obviously it’s anything but. As a thriller Brainscan never puts its protagonist in deep enough trouble to warrant the classification. Even as evidence and corpses mount there always seems to be an exit waiting for Michael. As a proxy-horror exercise it fails not only because it lacks the scares and grue, but because it never truly ventures into the territory. To the untrained eye Brainscan indeed looks as a fairly typical horror movie of the day, but beyond the superficial ties with the genre are practically non-existent. Brainscan was a timecapsule of 90s counterculture. Michael’s room is adorned with posters from Aerosmith, Iron Maiden, Alice Cooper, Metallica, and Fangoria. The soundtrack features, among others, OLD, White Zombie, Primus, Pitchshifter, Butthole Surfers, Mudhoney, and Wade. It’s strange that Furlong chose this Canadian co-production after the high-profile Terminator 2: Judgment Day (1992) from James Cameron. Brainscan is woefully banal and if it wasn’t for Furlong it would have fallen into much-deserved obscurity ages ago.