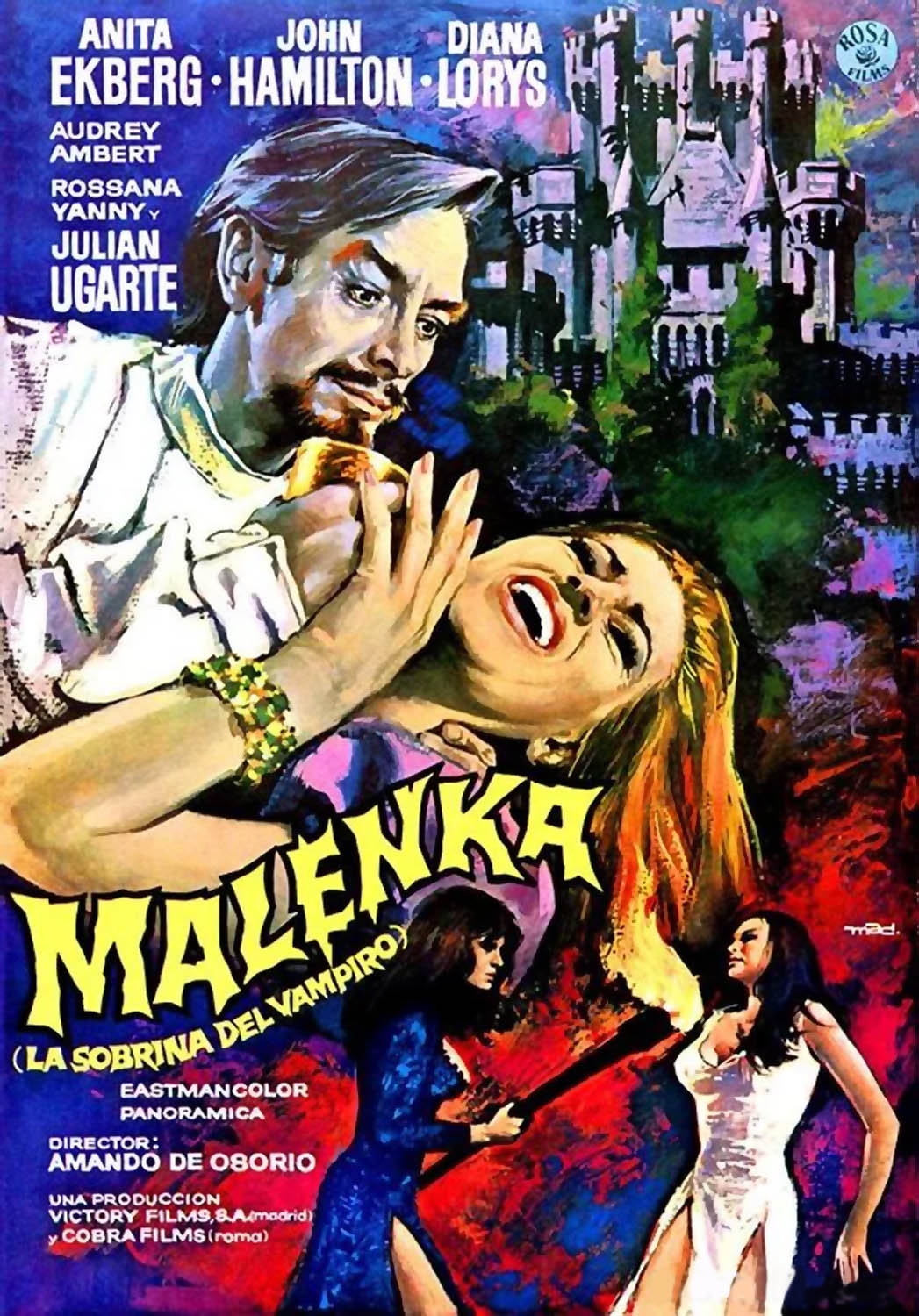 Malenka (released in English language territories as Fangs Of the Living Dead) was a Spanish-Italian co-production that was significant for being one of the first vampire films to emerge in Spain under the repressive regime of Generalísimo Francisco Franco. Allegedly inspired by The Fearless Vampire Killers (1967) it was the first foray into horror for director Amando de Ossorio. De Ossorio was only preceded by Jacinto Molina Álvarez (Paul Naschy to the English-speaking world) and his The Mark Of the Wolfman (1968) that proved that horror could be a viable genre in Spain. It's rather interesting that the Philippines, a Spanish colony, arrived at the vampire film earlier with Gerardo de Leon's The Blood Drinkers (1964) and Blood Of the Vampires (1966), both with Amalia Fuentes in the starring role. For the time Fangs Of the Living Dead at least attempted to push the envelope.

The primary selling point for Fangs Of the Living Dead is poorly dubbed Swedish star Anita Ekberg. Ekberg debuted in Abbott and Costello Go to Mars (1953), with her star rising thanks to appearances in War and Peace (1956), Federico Fellini’s La Dolce Vita (1960) and Boccaccio ’70 (1962). However by 1968 her career had taken a steep turn for the worse, and Ekberg would be making a living appearing in mostly Mediterreanean (Italian and Spanish) exploitation productions of dubious merit. Fangs Of the Living Dead was the last cinematic exploit for spaghetti western regular Adriana Ambesi who also had a role in the big budget John Huston production The Bible: In the Beginning... (1966) just three years earlier. 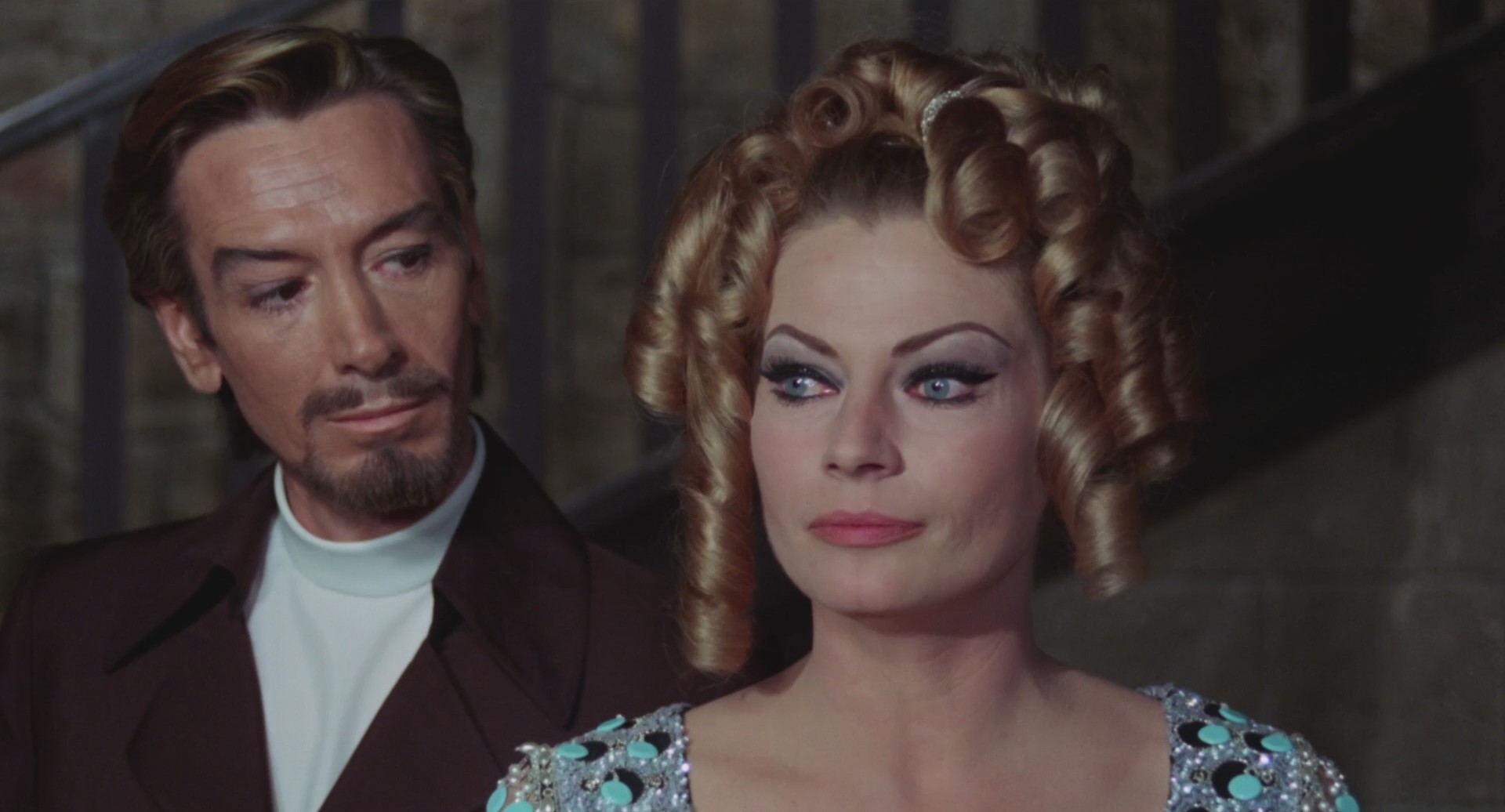 The remainder of the cast were veterans of Paul Naschy and Jesús Franco productions. Rosanna Yanni and Julián Ugarte worked earlier with Naschy on The Mark of the Wolfman (1968), and Yanni would do so again in Count Dracula’s Great Love (1973). For Amando de Ossorio’s Fangs Of the Living Dead she not only acted as one of the principal characters, but also served as its producer together with Adriana Ambesi. Yanni would also appear in The Amazons (1973) from former Bond director Terence Young. In 1962 Diana Lorys appeared in the Jesús Franco thriller The Awful Dr. Orloff before starring in a string of spaghetti westerns. Lorys had worked earlier with de Ossorio on the spaghetti western The Three from Colorado (1965). During the 1970s Lorys turned up in the Franco productions The Bloody Judge (1970) with Christopher Lee, and Nightmares Come at Night (1972) with late Franco muse Soledad Miranda in a relatively minor part. Not helping matters either was that Ugarte was only two years senior to Ekberg.

As a peculiar retelling of the 1897 Bram Stoker novel Dracula, Fangs Of the Living Dead concerns itself with Sylvia Morel (Anita Ekberg), an Italian model that looks suspiciously Nordic, who inherits the old family homestead of Waldrick Castle, somewhere in a remote region of Germany. Two weeks away from getting married to her fiancé Dr. Piero Luciani (Giani Medici, as John Hamilton), Sylvia rushes to inspect her inheritance. At the local tavern she meets barmaids and siblings Freya Zemis (Rosanna Yanni, as Rossana Yanny), and Bertha (Diana Lorys), both wearing low-cut dirndl dresses, the latter of whom wastes no time in making a pass at her client. When she announces that she’s the new Countess barmaids and villagers alike act as if they’ve seen a ghost. Meeting Count Walbrook (Julián Ugarte) at the castle estate, Morel enthusiastically declares “what an incredibly handsome uncle I have!” before kissing him on the cheek and noticing his icy coldness. Vladis (Fernando Bilbao) Walbrook’s trusty coachman, houseservant, and guard at this juncture chooses to dispense information to Morel about her uncle’s nocturnal habits in the castle. 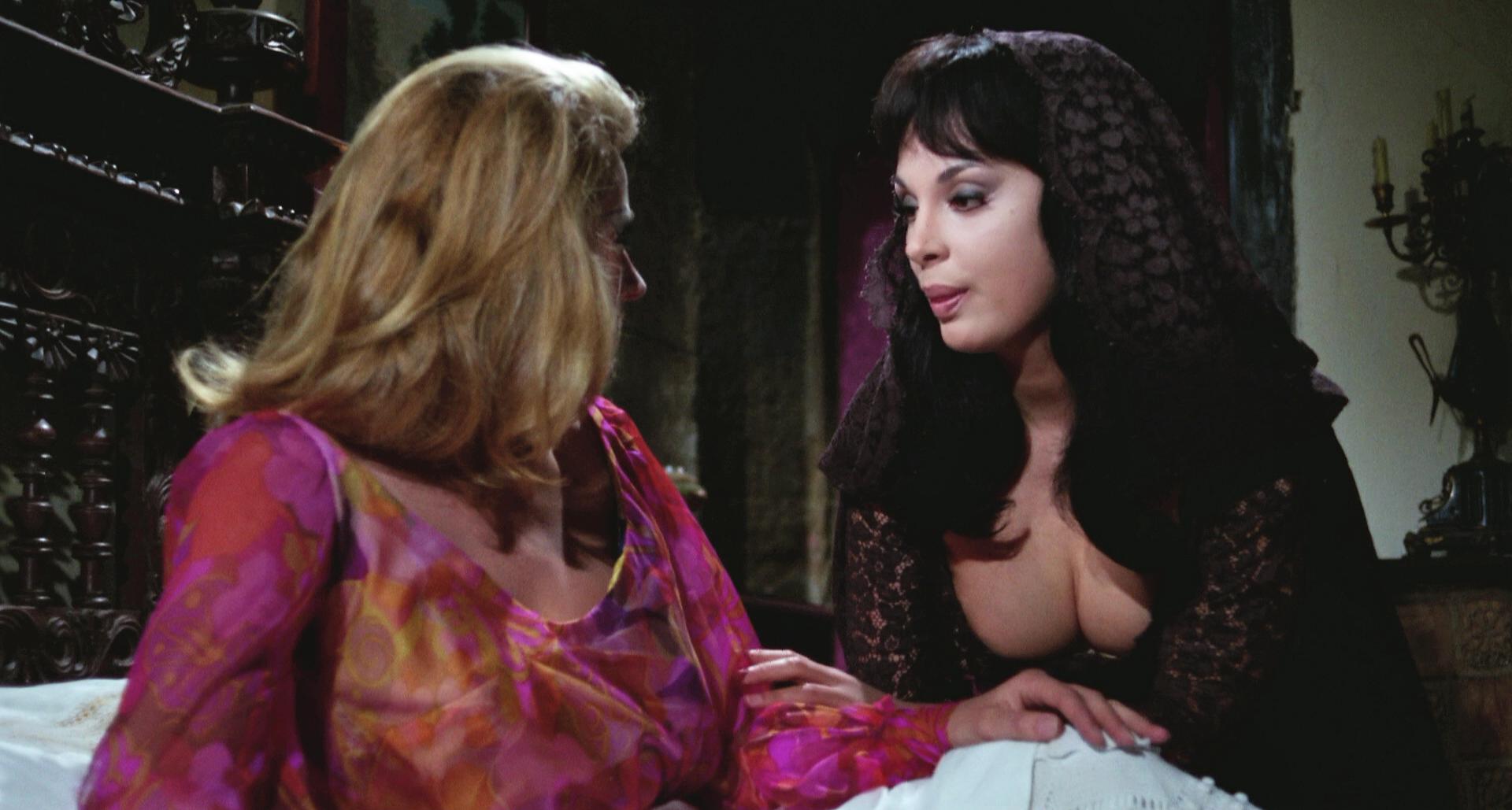 That night Sylvia is woken up by Blinka (Adriana Ambesi, as Audrey Ambert) who wears an incredibly revealing funeral dress, describes herself as one of her uncle’s former mistresses, and prefers to talk about herself in the third person. Not having properly rubbed the sleep from her eyes Sylvia is overcome by Blinka, who doesn’t hesitate to make a pass on her. Moments later Walbrook storms in, forcefully removing Blinka from Morel’s room, and whipping her into subservience in one of the adjacent chambers in a scene that must have been provocative and daring for the time. At this point Walbrook shows Sylvia an ancestral portrait which is said to be her maligned great-grandmother Malenka, “a brilliant biochemist!” and alchemist that dabbled in black magic, and experiments in necro-biology. Transgressions for which she was burned “at the stake in the town square” by a pitchfork-and-torches brandishing mob of mortally terrified - or “a murderous, ignorant crowd” as Walbrook describes them - villagers. Having put Sylvia under his spell the Count tries to turn her in a blood ritual that doesn’t follow typical vampire lore. As a last resort he coerces her to call off her engagement, to follow the voice of blood and join him in the halls of eternity. Sylvia is, of course, none too sure about any of it... 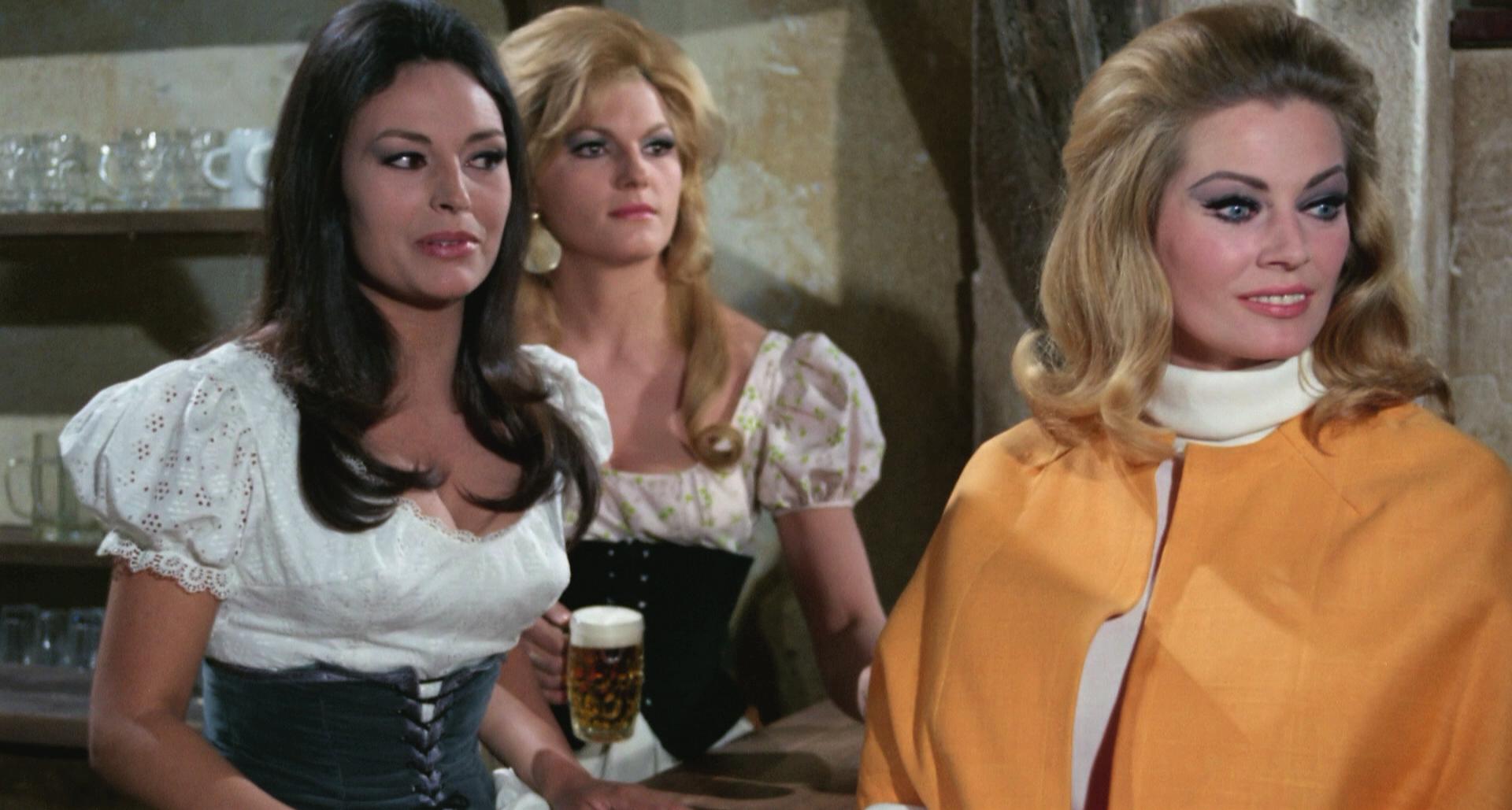 Piero Luciani and his comic relief buddy Max (César Benet, as Guy Roberts) travel to the castle but are denied admittance by Vladis. In the town they seek the assistance of Dr. Horbinger (Carlos Casaravilla), the disgraced and now continually inebriated town physician that believes in the vampire myth. Luciani shrugs it off as “nonsense” and before long the trio are headed off to Waldrick Castle to put end to Count Walbrook’s unholy reign of terror. Will they be able to free Sylvia? Is Walbrook truly a vampire as he suggests? Fangs Of the Living Dead exists in several different versions. First there's a 75-80 min. US print with producer-mandated alternate ending that de Ossorio reluctantly filmed, then there's a 96-98 min. European print, probably of Dutch origin, that includes additional science exposition, and dialog scenes but omits the alternate ending. Finally there is the original Spanish Malenka print with the ending as envisioned and intended by its director.

The ancient undead already played a prominent part in Naschy's The Mark Of the Wolfman (1968) and they were the focal point of de Leon's The Blood Drinkers (1964) and Blood Of the Vampires (1966). Fangs Of the Living Dead pilfers both of de Leon's vampire exercises in terms of plot. The vampire craze would reach a climax in 1973 with the release of Count Dracula’s Great Love, León Klimovsky’s The Dracula Saga (which all but steals the plot of Fangs Of the Living Dead), Joe Sarno's low-key Vampire Ecstasy and Luigi Batzella’s The Devil’s Wedding Night. Compared to these later outings Fangs Of the Living Dead is rather demure and prudish as was expected under Franco's military dictatorship. For a late 60s continental European production it at least tries to be provocative with its scenes of punitive whipping, implied sapphic liaisons and by putting the major female cast members (Lorys, Yanni and Ambesi) in very flattering low-cut dresses. 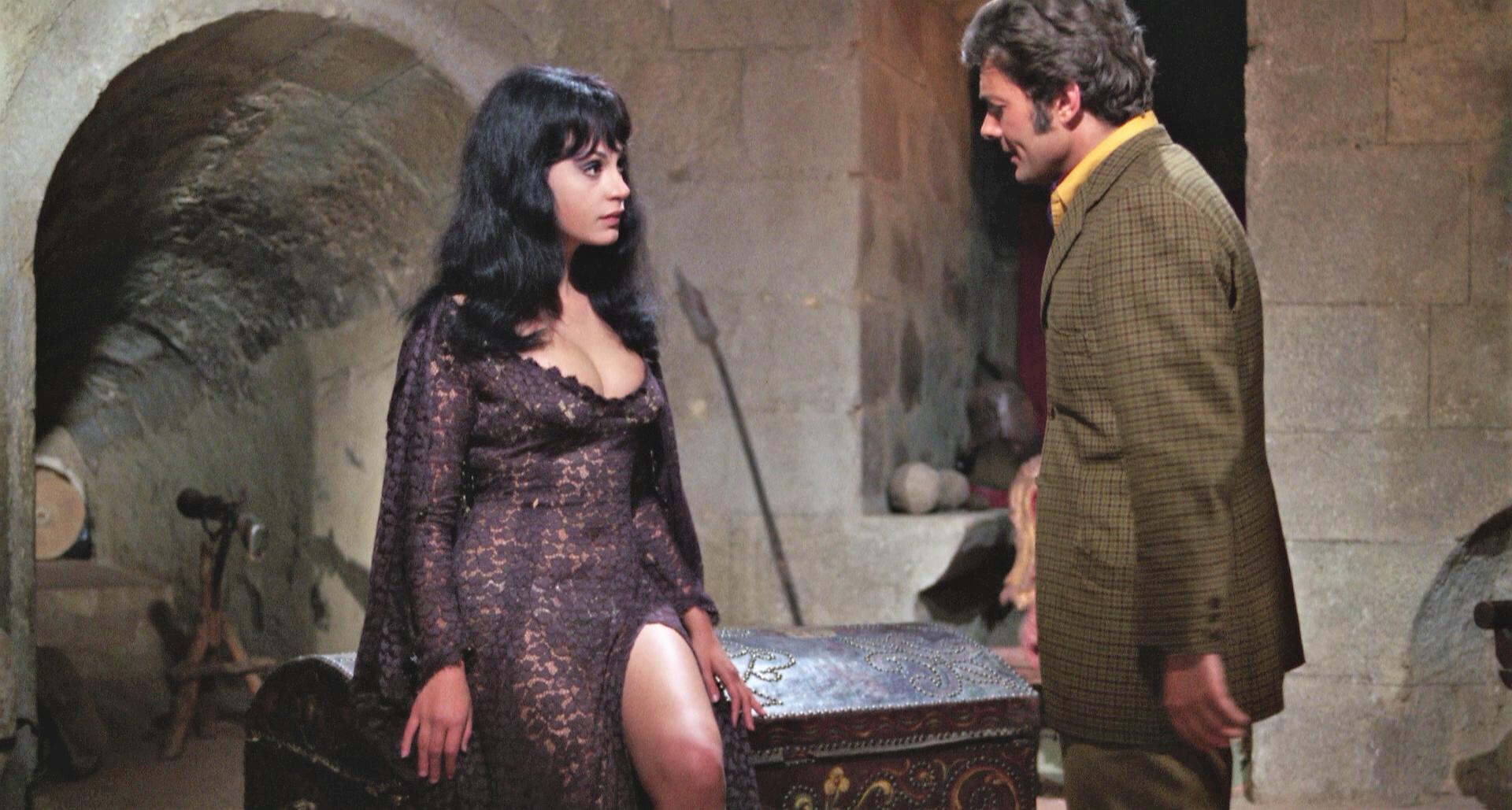 Fangs Of the Living Dead might not be the most stimulating of the form, but it benefits tremendously from its location. Waldrick Castle, or the chateau standing in for it, is filled with darkened hallways, candle- and torchlit mausoleums; shadowy, cobwebbed crypts, and opulent chambers. As a gothic horror piece Fangs Of the Living Dead eschews from both blood and nudity, but as Hammer Horror before it each of the actresses is put in skimpy dresses that allow as much bare skin as possible. The more voluptuous Rosanna Yanni and Adriana Ambesi regularly struggle to keep their assets contained in their dresses. What it lacks in technical polish it compensates with a sweltering sense of Mediterranean darkness and a melancholic organ, violin and harmonium score from Carlo Savina. The English language dub is atrocious even by 1960s exploitation standards. Amando de Ossorio would truly come into his own with his much lauded second horror feature Tombs Of the Blind Dead (1972), which spawned two sequels of its own, and with the amiable The Loreleys Grasp (1973) with Helga Liné and Silvia Tortosa.