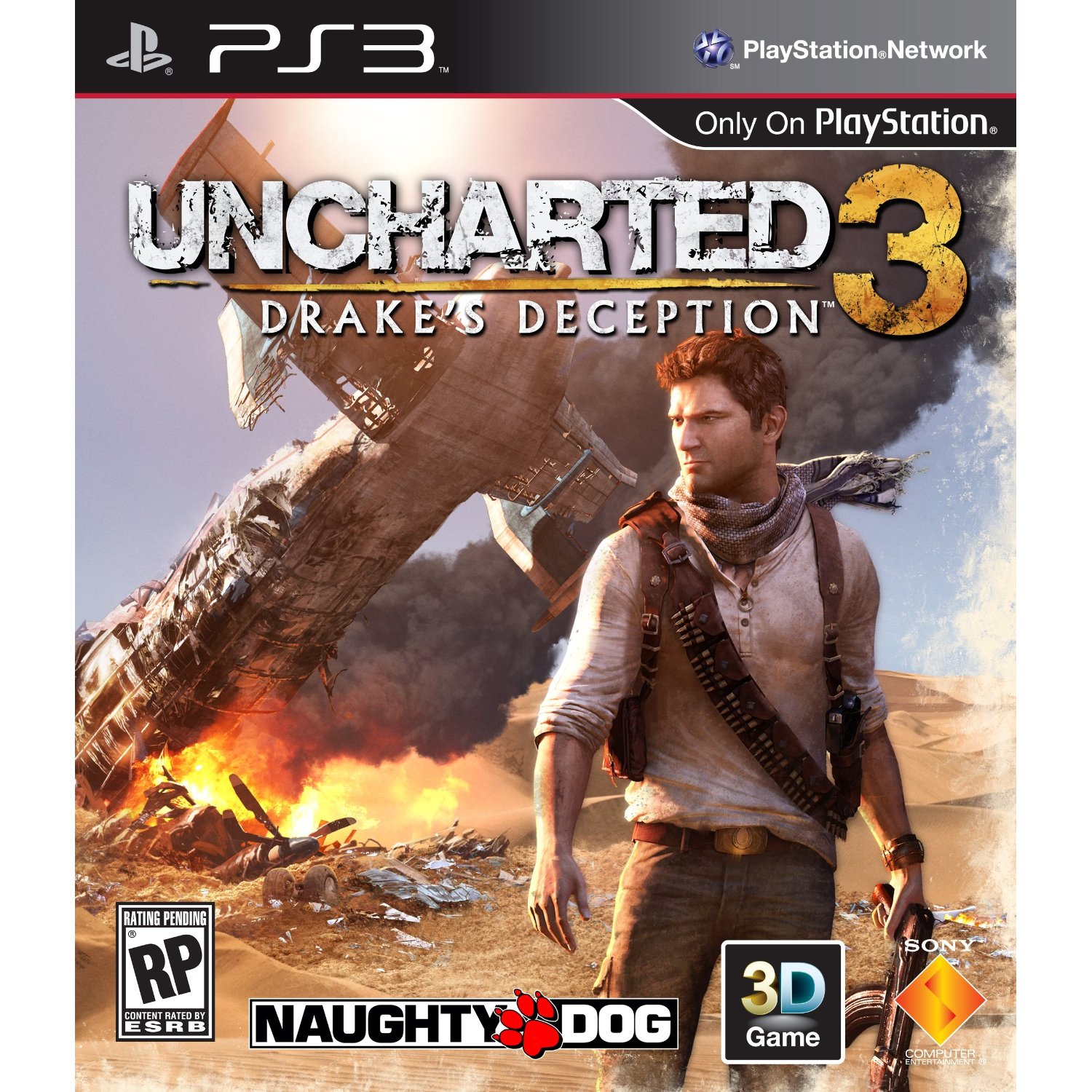 “Uncharted 3: Drake’s Deception” is in many ways the technological pinnacle and creative nadir of Naughty Dog's universally lauded Uncharted franchise. “Drake’s Deception” is a highly responsive, visually stunning but creatively hollow experience that despite looking absolutely breathtaking has nothing to add to the existing canon.

The prologue – a melee bar brawl after a deal gone sour - in London, England sets the tone and just runs with it hard, for better or worse. This third installment takes everything people loved about the previous two episodes and turns them up to eleven. Drake (North) and Sully (McGonagle) meet up with Talbot (Atkin Downes) who works in service of a mysterious benefactor called Katherine Marlowe (Rosalind Ayres). As a trade-off results in a barfight and the eventual shooting of Drake – we jump back two decades in the past, to a flashback in Cartagena, Colombia to revisit Nathan’s past as teen. Marlowe is introduced as one of Sullivan’s past love interests, who has an agenda of her own. Both parties seek Ubar, the City of Brass. The Atlantis of the Sands, as T.E. Lawrence calls it. This is any and all story this chapter offers, at best. 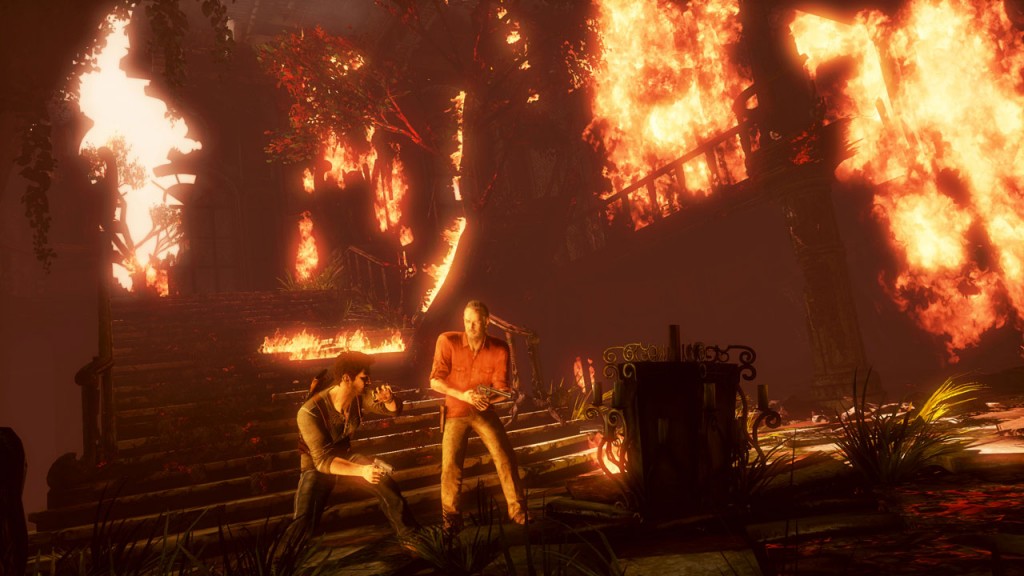 The detour into Drake’s Colombian youth adds a lot of depth to the character, it plays out almost indentical to the entire pre-credit intro the “The Last Crusade”. Like that scene added depth to the character of Indiana Jones, so does this sequence add depth to the duo of Drake and Sullivan. But not everything is handled quite that well, either by circumstance or by choice. “Drake’s Deception” is beset by troubles from many sides. The setpieces no longer seem to flow organically from the story as was the case with previous two installments. At one point Nathan goes through an insane amount of trouble to rescue Sullivan from the pirate Rameses, but this extended rescue mission adds nothing of note to the central narrative. It exists only to show off a couple of admittedly cool looking and technically impressive setpieces, but nothing more.

Not only is Rameses, for as much fun as he actually is, an expendable character of the worst kind – his entire little character arc has zero purpose in the game’s narrative. The entire ship section is obsolete and is only there to artificially lengthen the game’s time, for all intents and purposes it has no other function than to show off the development team’s technological fireworks. These are cool and technologically impressive, no doubt – but exactly how much to they add to the package when their inclusion is artificial at worst and superficial at best?

There are other aspects that seem to trouble the already questionable plot for “Drake’s Deception”. A new character is introduced in Charlie Cutter (Graham McTavish). He appears to be an old associate of Drake’s and Sully’s, and is the current paramour of Chloe Frazier (Claudia Black). The London and Syria parts of the game go great lengths to explain the character’s backstory and relations to the principal cast we knew of the past two games. Just when you thought that the Cutter character was going to be vital in the game’s conclusion, he gets injured late in the Syria level escape and is conveniently carted off. Why you ask? The Cutter character had to be sidelined in order for McTavish to the able to partake in the shooting of Peter Jackson’s “The Hobbit” trilogy. Why introduce a new character if you’re not going to use him fully? 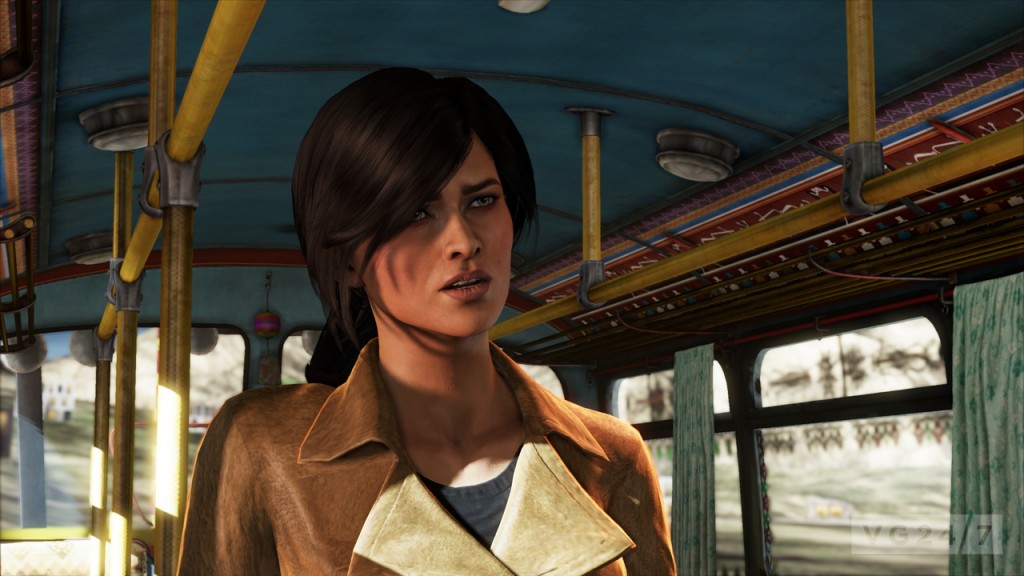 As much fun as Chloe was in “Among Thieves” here she’s reduced to nothing more than a wisecracking, domesticated and uninteresting sidekick. Much of her adventurous spirit has been toned down due to the presence of the Cutter character. Many things that made her so loveable in the preceding episode have been either toned down or cut out entirely, for one reason or another. Safe to say, you won’t find yourself jumping on speeding trains to rescue her. Chloe is as interesting as a cardboard box here.

If there’s one person you can always rely on to bring the fire, it must be Emily Rose. As this story focuses on the father-son relationship between Drake and Sullivan it is understandable that the women are relegated to supporting roles. The last time we met Elena Fisher she was an international reporter for an unnamed TV station.  A few years have passed and she was once again promoted. Elena now is an international correspondent in Yemen, but that is as far as the good news goes.

For whatever reason Naughty Dog has grown timid and artificially introduced conflict in what used to be an established and healthy hetero-normative relationship. Nate and Elena apparently have separated, although both keep wearing their supposed engagement (wedding?) rings through out the game. What instigated their parting is never fully explained, and a few throwaway lines suggest that they drifted apart due to conflicting lifestyles. Elena being happy with her relatively stable life as an international correspondent, while Nate is still risking life and limb for loot on a daily basis. The fact that both have bonded – twice! – over life-threatening situations is brushed to the side for a soap opera worthy excursion into banality. Naughty Dog also seems to have forgotten that the entire point of the preceding “Among Thieves” was about Nate choosing who he loved most: his reliable and trustworthy ally Elena Fisher or the exotic Amazonian minx Chloe Frazier. Nate chose Elena.  Somehow, this is put into question for the duration of the game. Why? Good question. Artificial conflict is the only reason I can think of, and it’s a shame that Naughty Dog need to resort to such lowly techniques. 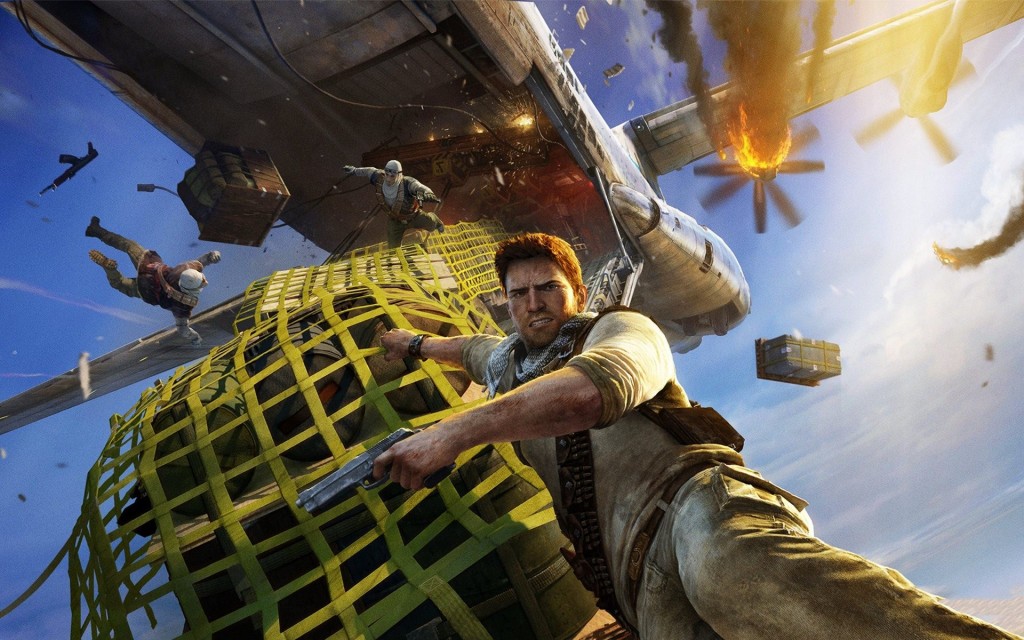 Why sabotage one of gaming’s most celebrated relationships of recent memory? After building the relationship for two games, they throw it away for this unnecessary and insulting conflict? Why? Gamers can handle a mature relationship, thank you. Don’t let the 14 year olds tell you otherwise, Naughty Dog. What exactly is gained here?

Yeah, Nathan and Elena kiss and make up at the end of this one – but will they stay together if a fourth title ever gets produced? Naughty Dog obviously lacks the confidence to truthfully answer that question. Of course, it’s not the most important question on most gamers minds, but its indicative of how things are “supposed to go” with writing in videogames.

The hand-to-hand combat has lost much of the luster it had in “Among Thieves”. Yes, the animations are the most fluid they have ever been, but the execution is the real culprit. There are only about two or three different animation sets, and much of the melee combat is now reduced to glorified QTEs. Similarly to the train section of the preceding title there are mini-bosses, here called Brutes. These Brutes can only be defeated by a certain combination of melee attacks. For all the shine and polish, it gets old… very quick. The enemy AI is both reasonably smart and/or incredibly dense, depending on the situation. You’ll have enemies rushing, flanking and trying to ambush you from corner and chokepoints – but you’ll also have mooks provoking shoot-outs in burning, collapsing buildings, capsized sinking ships or general scenarios in which it would be logical to just haul ass and get so safer ground. No such luck here, suspension of belief is not a thing, it is a thing that Uncharted 3 just pushes over the edge.

“Drake’s Deception” is the most scripted game to date. Where past titles at least gave the illusion of freedom and a certain amount of choice, everything about this third chapter is scripted beyond good taste. An entire level is dedicated to chasing Talbot through the streets and over rooftops in what arguably can be called the “corridor level”, only to result in Drake getting captured and put on the earlier mentioned cargo ship of pirate Rameses. The desert level (despite looking positively stunning) is nothing but walking forwards in three different scenes. There’s no exploration, no management of food and resources – just walking forward, while in-between cutscenes and atmospheric voice-overs provide, admittedly, reasonable context and urgency to the situation. On all other fronts, it is another wasted opportunity on part of everybody involved.

Later in the game we see a horseback-car chase sequence that seems directly lifted from “The Last Crusade”. When we finally do arrive in Ubar, the Atlantis Of the Sands, there is little done with it. Sully gets shot (again), Nathan gets drugged (again) and starts hallucinating and the most interesting encounter doesn’t even actually happen in real life, not really. After all the running around, gunning and jumping about the player finally arrives in Ubar, and that’s it. There’s no element of wonder you had in the past two games, no sense of discovery, nothing of the sort. The past two games did so brilliantly in their final levels. It looks great, sure, but it is purely mechanical at this point. You eventually end up in a dusty city, you fight some baddies – cue “the end”. 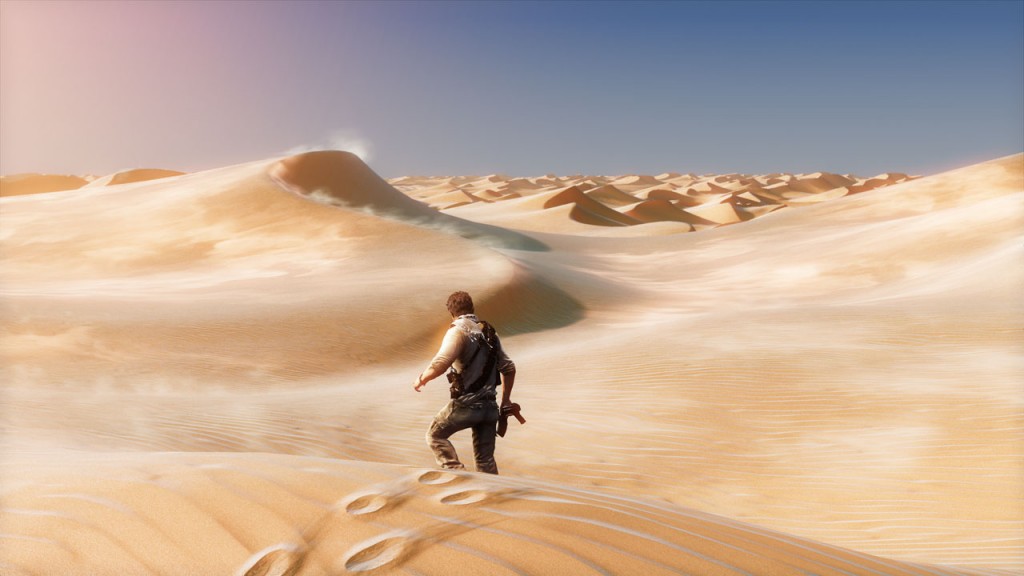 The Fire-Demons are in the tradition of the first chapter’s Descendants and the second chapter’s Guardians, but despite that they are the toughest supernatural enemy Drake has yet faced – the lack of backstory (it is hinted at) for these creatures makes them that much more futile. They look good, but what are they? How were they created? The game answers this with a few throwaway lines that can easily missed. Hell, I missed out on them on my first playthrough, and I look especially for narrative in video games. A missed chance, for sure.

Drake and Sullivan have never looked better. The hair, skin and clothing textures have an amazing level of detail. The animations and motion-capture is par for the course with Naughty Dog. For some unfathomable reason the character model for Elena went through some changes, especially her face. In past incarnations she really looked like the actress that provided her voice, Emily Rose – but this third installment makes her face rounder with big eyes. It’s almost manga-eque. Why this was done? Who knows… ?

The music by series composer Greg Edmonson is the most worldly it has ever sounded. The soundtrack is full of acoustic guitars, Arabic melodies and string sections worthy of any classic or contemporary action/adventure. For one thing, Edmonson can always be relied upon. It’s utterly terrible that a game this inert and mechanic has such an incredible soundtrack.

The biggest complaint I can level at this Uncharted is how unhinged and disjointed it is. The story sputters and bounces around in all directions, setpieces are plenty and spectacular. The setpiece scenes seem to dictate story progression first and foremost, above all else. From a plain narrative point of view at the end of the game the situation is identical to that of the beginning. There’s no journey, the characters learn nothing and besides a few winks and nods to earlier chapters, there isn’t a lot to recommend here.

“Drake’s Deception” reeks of complacency and the blackest of contempt. It knows it has the all the elements you expect it to have, it just does nothing particular engaging or remotely interesting with them. It seems to say: “here are the parts you requested, have fun with them”. So, to conclude. “Drake’s Deception” is typical of AAA video games in this day and age. It looks great, it sounds great and it plays intuitively, but it is ultimately vapid and utterly forgettable. It has all the parts you expect from an Uncharted title, but little of it truly stays with the player after the experience is over. Greg Edmonson’s score is amazing as ever, and the voice work is superb. When all is said and done, I’d rather boot up “Drake’s Fortune” or “Among Thieves”, because frankly both are just plain better than this series of unfortunate events.

Sure, it looks cool – but is that enough for you?