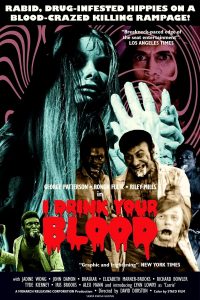 Produced by New York-based exploitation distributor Jerry Gross through his Cinemation company I Drink Your Blood is significant for predating Jorge Grau’s Let Sleeping Corpses Lie (1974), and Jean Rollin’s The Grapes Of Death (1978) by several years. Gross released and distributed legendary reviled titles as Mondo Cane (1962), Teenage Mother (1967), and I Spit On Your Grave (1978). David E. Durston's pandemic shocker I Drink Your Blood  transcends its obvious budgetary limitations by embracing them to their fullest effect. Like George A. Romero’s original shocker Night Of the Living Dead (1968), both Durston’s low-rent splatter exercise and Rollin’s meditation on mortality are surprisingly rich in subtext and rife with relevant social commentary if one is willing to overlook its superficial shortcomings and shoddy direction. What it lacks in polish, it complements by the number of sociopolitically relevant topics that Durston addresses in his screenplay. 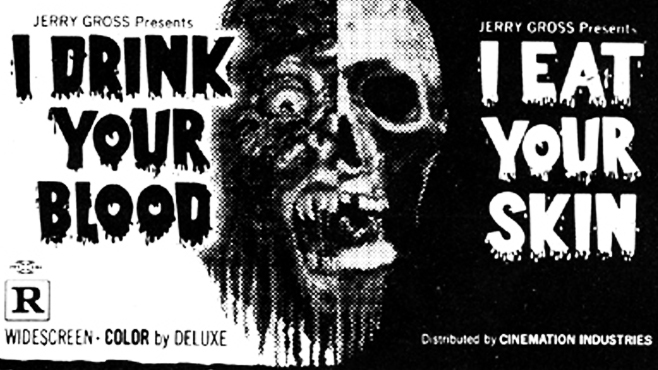 I Drink Your Blood was inspired by the highly-publicized trial of Charles Manson, his “family”, the Bianca-Tate murders (in one scene a hippie writes ‘pig’ on a victim in blood to drive the point home), and an article that Durston had read about a mountain village in Iran where a pack of rabid wolves attacked a local schoolhouse infecting the victims with rabies. I Drink Your Blood was released at the height of the Vietnam war, and general social unrest in America. It was famously part of a double-bill with I Eat Your Skin (1971) but contains no actual blooddrinking despite its alluring title. Cementing its reputation as a drive-in shlock classic was the fact that it was the first movie to be rated X for its violence, and not for its nudity. 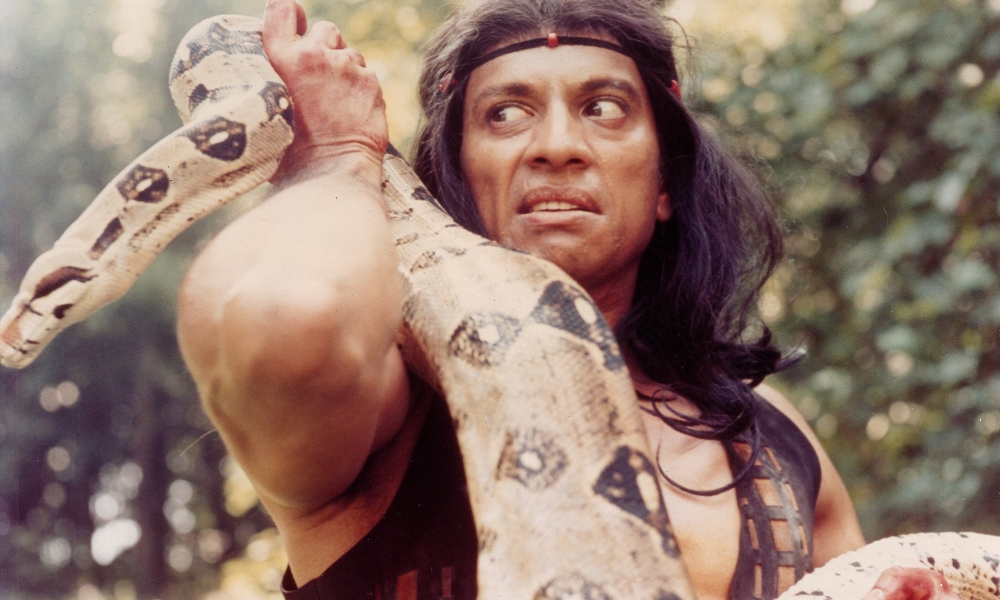 The racially diverse, LSD-addicted gang of delinquent, faux-Satanic hippies are led by the twitchy, constantly expressively grimacing Horace Bones (Bhaskar Roy Chowdhury, as Bhaskar), an Indian who the movie tries to pass off for a Native American. Bones calls himself “the first born son of Satan” and is the self-appointed leader of the Manson-like SADOS, or Sons and Daughters Of Satan, who live by the adage that “Satan was an acid-head!” Other members in the gang include hulking African-American Rollo (George Patterson), who has cult leader aspirations of his own, Asian medium and spiritualist Sue-Lin (Jadin Wong, as Jadine Wong) who insists on wearing traditional Chinese dresses despite their obvious impracticality. The group is rounded out by the pregnant Molly (Rhonda Fultz, as Ronda Fultz), the mute Carrie (Lynn Lowry in her debut role, who has the cutest Elvish features and enchanting feline eyes), and the expected girl of low moral fibre whose looseness sets in motion much of the subsequent ravaging in a scene much more resonating than many give it credit for. Chowdhury plays Horace Bones as a twitching, wide-eyed madman whereas Lowry's acting is mostly of the non-verbal variety. 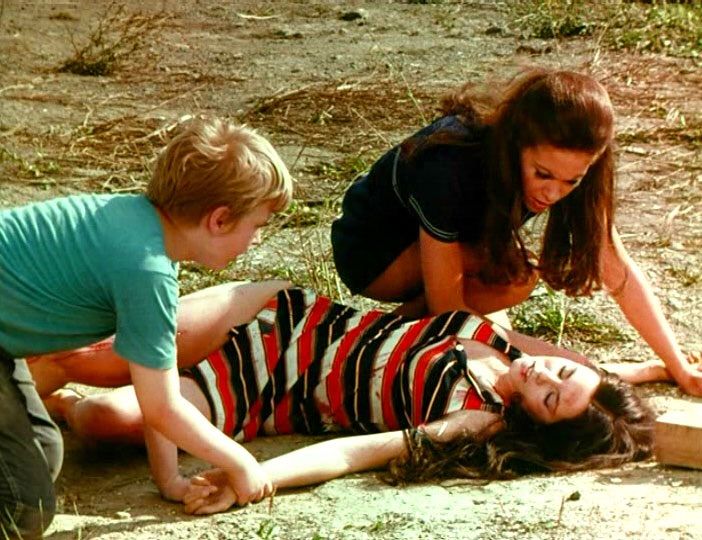 The infractions of the hippies are relatively minor proportionate to their comeuppance. Bones and his gang savagely beat up Sylvia (Iris Brooks, and an uncredited Arlene Farber). Doc Banner (Richard Bowler), toting a shotgun, pays Horace and his gang a visit in the abandoned hotel they’ve squatted to put them in their place. Banner is beat up and dosed with LSD for his trouble. “We'll make a baker out of you yet, Pete!”, says local entrepreneur Mildred (Elizabeth Marner-Brooks) in one scene to her pint-sized helper (Riley Mills). “Nope,” retorts Pete, “I'm gonna be a veterinarian.” The exchange beautifully presages a scene wherein Pete shoots a rabid dog. In an act of retribution Pete inoculates a portion of meatpies from the bakery with the infectious blood of the rabid dog. Unlike French microbiologist Louis Pasteur - who inoculated rabies in a 9 year old boy in 1885, thus laying the foundation for modern vaccination – Pete spikes the meatpies for the alleged atrocities visited upon his older sister and grandpa. Pete’s plan backfires in such a spectacular fashion that his alleged solution causes more trouble than the derelict gang of faux-Satanic hippies would ever be able to wreak by themselves. As the ravenous hordes descend on the mostly abandoned Valley Hills the residents hole up, in tradition of Night Of the Living Dead (1968), in a local store. 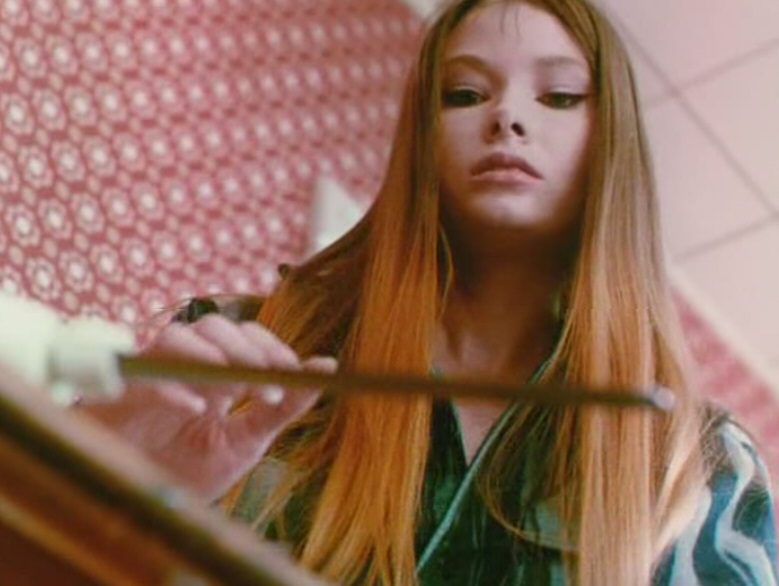 The majority of the movie concerns itself with the conservative backlash of middle Americans against the increasing presence of non-white, non-Christian demographics. Likewise can the vigilantism and retaliation from the Valley Hills residents be seen as a repeal against the counterculture of the day, the hippies. That it are the whitebread Valley Hill residents that fight back against the multi-ethnic gang of hippies is representative of the institutionalized racism that hasn't subsided since. In a particularly gruesome scene pregnant girl Molly self-aborts through seppuku. Likewise does Sue-Lin self-immolate, evoking the famous 1963 photograph of Buddhist monk Thích Quảng Đức. An exchange between the Banner siblings pushes Durston’s anti-drugs message quite clearly. A hippie girl’s practice of “free love” with a construction crew, infecting them with the rabies virus in the act, is especially resonating as an cautionary omen for the ensuing decade’s AIDS scare. 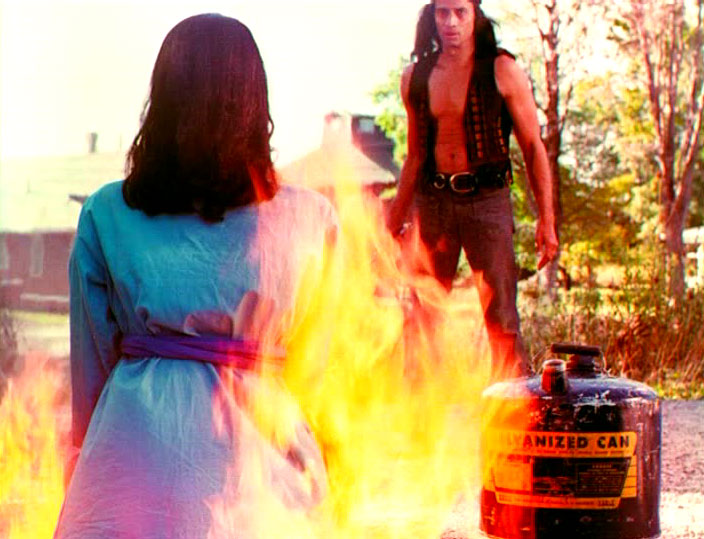 One of the strongest suits of I Drink Your Blood is that it is able to overcome its budgetary limitations thanks to a variety of contributing factors. The cast, consisting of humble unknowns and future stars, are visibly having fun with the ridiculous premise. Parts are either overacted or underacted. Chowdhury was a dancer of Indian descent, had his own dancing school with Bhaskar Dances Of India and dabbled on the side in acting and painting. In late October 1977 Chowdhury was crippled as a result of a stage fall during rehearsal, and confined to a wheelchair for the rest of his days. Riley Mills is the exception to the child actor rule as he isn’t odiously annoying. Andy (Tyde Kierney, who managed to carve out a respectable career despite appearing in this shlockfest), the good kid who fell in with the bad crowd, ensures Sylvia that the Satanic rhetoric is just “for the kicks”. He, expectedly, quite literally loses his head in the third act. The film plays fast and loose until the disease incubates. The gang’s descent into madness and bloodlust is accentuated through the usage of stark lighting and deeper shadows. The Herschell Gordon Lewis alike practical effects are surprisingly accomplished. Clay Pitt’s score alternates between ominous primitive electronica and folk psychedelia. 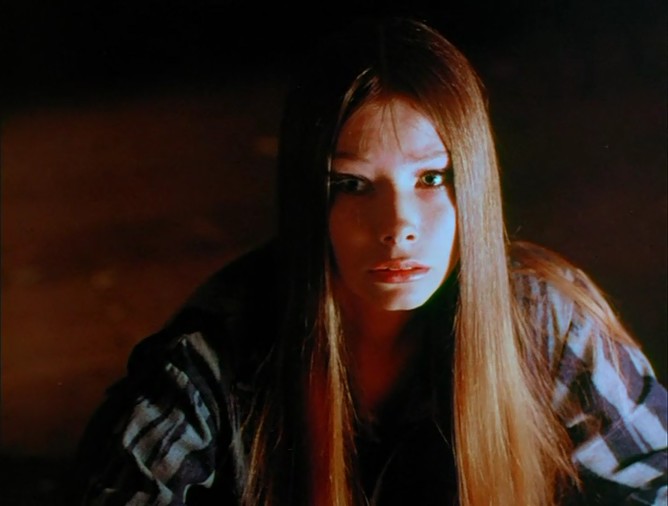 Lynn Lowry, who receives an “introducing” credit here, would go on to star in George A. Romero’s pandemia thriller The Crazies (1973), David Cronenberg’s body horror debut Shivers (1975) and Brian DePalma’s 1976 Stephen King adaptation Carrie. Arlene Farber would go on to star in William Friedkin’s crime caper The French Connection (1971) with a young Gene Hackman. Jadin Wong, who like Bhaskar Roy Chowdhury was a dancer by trade, was a pioneer for Asian-Americans in Hollywood. Beyond acting and dancing Wong had established herself a singer and stand-up comedian. Frustrated by the lack of Asian-Americans in entertainment she started her own company and became a talent scout. After thirty years Wong became the foremost agent for Asian-Americans in New York with a client base including Lou Diamond Phillips, Bai Ling, and Lucy Liu. Later she found the Jadin Wong Educational Fund to discover and hone young Asian-American talent. 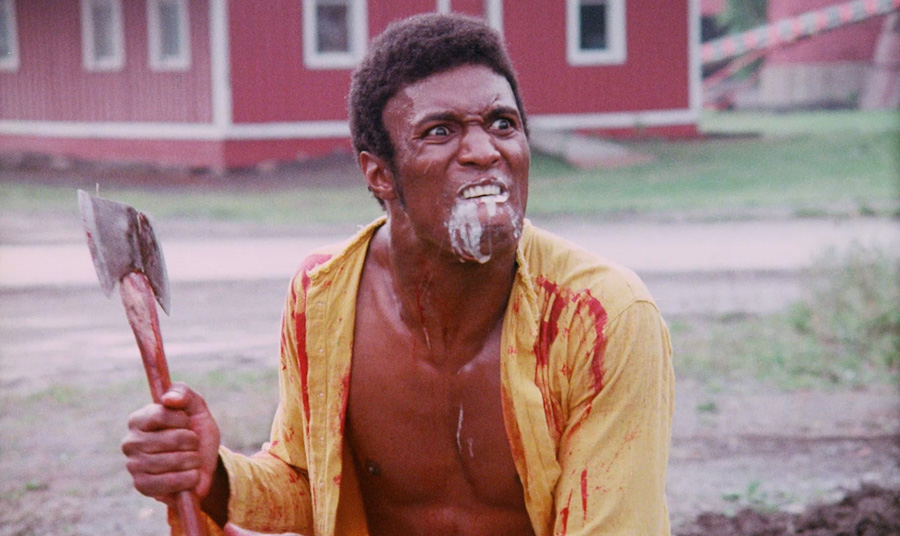 The legend of I Drink Your Blood has long since eclipsed what it actually amounts to. Filmed in and around Sharon Springs, New York over eight weeks it was a grindhouse staple. Much like the torn-from-the-headlines premises of Three On A Meathook (1973) and Deranged (1974), I Drink Your Blood compensates its lack of resources with a breakneck pace, and a cast of mostly unknowns who are clearly having fun. None of it is delivered with any nuance, and its socio-political subtext has remained relevant in the intervening decades since it was originally released in the drive-in circuit. I Drink Your Blood was sampled by infamous New York duo Mortician on their second album “Hacked Up For Barbecue”  and remains a laugh-a-minute gorefest that looks as if a reel went missing at some point. Despite all its technical shortcomings and rough look it is just loads of delicious gory fun…