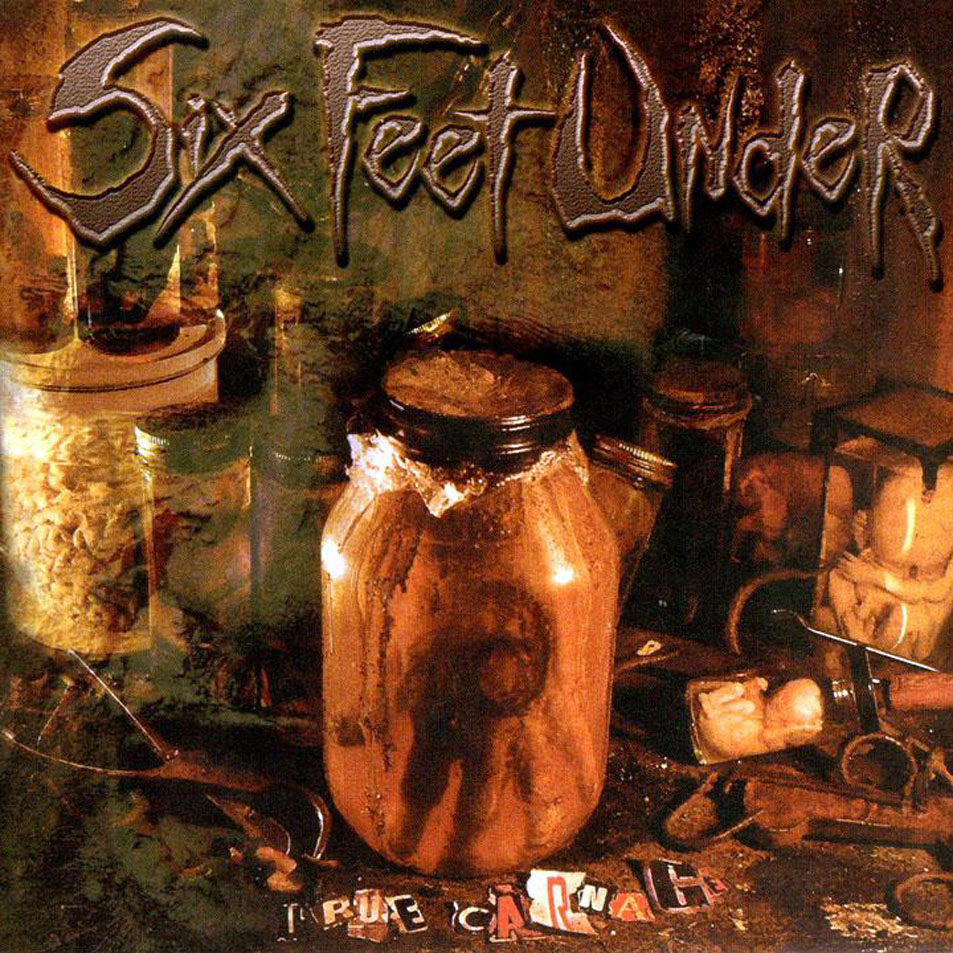 If “Maximum Violence” was the point where Six Feet Under jumped the shark creatively then “True Carnage” is the point where they stopped caring altogether. Two years after their last recording embarrassment these Tampa, Florida natives return for another round of the most primitive, unassuming and lunk-headed death metal. “True Carnage” is a lot of things, but it isn’t good by any stretch of the imagination. This was released in 2001, when death metal was going through a number of important changes. While everybody was seeking to improve themselves, Six Feet Under descended into a haze of weed smoke and cheap booze. No longer trying, and no longer caring they dished out a record that is actively offensive to the listener, and not in the way they probably intended. “True Carnage” is Six Feet Under’s artistic death certificate and a sad reminder of what happens to bands that should never have had full label support from day one. 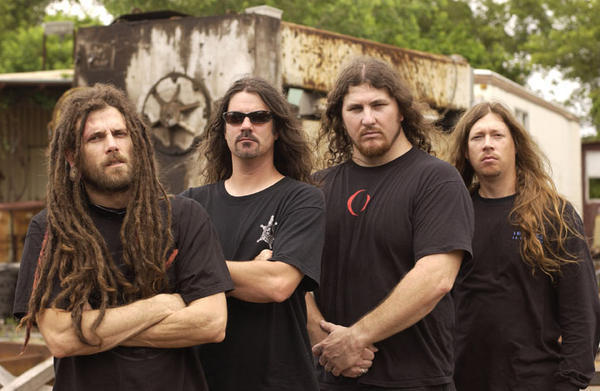 Let’s get some obvious facts in the open first. 7 songs out of 11 don’t reach the standard 3-minute mark. Where on the preceding albums the band at least tried to write actual songs, predictable as they might have been, here they just throw together a bunch of simplistic riffs and call it day. You play groove death metal, the most basic form of the genre – is it really that hard to piece together more than two riffs per “song”? I’m all for keeping things simple, but this is pushing it. Bolt Thrower has proven this in spades, with a handful of riffs per song and a sense of dynamics even this genre can be exciting, satisfying and brutal. Six Feet Under is the exact opposite of that modus operandi. With an intermediate of three riffs per song, there isn’t a lot of substance to begin with – but even Steve Swanson is no longer trying here. This guy was in Massacre, a band that made simplicity its trademark. Apparently Swanson learned nothing from Rick Rozz.

The songs are messy, two riff affairs that embody everything that is wrong with death metal. What ‘Impulse to Disembowel’ is supposed to be I do not know, but it isn’t good. When the band does get the equation right once every blue moon, the results are still amazingly average and unexciting. The thick bass grooves and lead/solo of ‘The Day the Dead Walked’ are the best parts of an otherwise far too mundane cut. Exactly how long can a band pass off the same riffs of the past three records as new ones? That is what happening here. Six Feet Under is cannibalizing itself once again, and they are recycling ideas, riffs and chord progressions wholesale. In ‘The Murderers’ Chris Barnes starts by stating the obvious: “it’s all fucked up” and outside of the hiphop-like drum intro, exactly what is the point? Sure, the solo is halfway decent, but that’s being generous. ‘Waiting for Decay’ is a retread of ‘The Day the Dead Walked’ and Barnes’ deep vocals are about the only worthwhile aspect of what is a clear recycling of a song you heard earlier – on this very album. Exactly how much more shameless and flat out lazy can a band get?

Then there are the guest appearances of this maligned recording. ‘One Bullet Left’, the band’s now expected vigilante song, features the Original Gangster Ice-T on a guest rap. Usually when Six Feet Under does vigilante/revenge songs they are about self-empowerment in some incoherent way. ‘Human Target’ and ‘No Warning Shot’ are popular for a reason. Above all these are easily recognizable scenarios for pea-brained metalheads to cling to. Whether it is about killing your enemies in ‘Human Target’, or shooting police officers in ‘No Warning Shot’. Even ‘One Bullet Left’ is different in that regard, instead of having the protagonist killing his/her enemies, the character takes a family hostage and brutalizes them, before taking his/her own life with one bullet left. 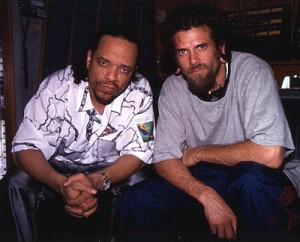 Ice-T’s expletive filled flow sounds self-deprecating and self-aware in levels that Chris Barnes sad little story is not. T flows about dealing damage to “You motherfuckin critic-ass bitch motherfuckers” and makes vows to kill them all with his gun. The surrounding lyrics, penned by Barnes, are incoherent at best. Starting off with the exclamation “I’ll kill all the haters” and the entire verse that follows seems to hint at Barnes dishing out cold revenge to his band’s many detractors. Then the Ice-T flow hits and the song suddenly switches subject to the earlier mentioned hostage situation. The song is poorly thought out on about every level, and Ice-T is sorely wasted on what should have been a potentially interesting pairing. T’s delivery of the lyrics far more interesting than anything Barnes has done for the past two records. Alas, it is not able to redeem this sorry album. It is another sad reminder that Barnes was probably smoking too much ganja at the time, and things that seem cool when inebriated are rarely so when sober.

‘Knife, Gun, Axe’ starts off with a decent drum intro, but the rehashing of past material becomes more clear once again. ‘Snakes’, the following song, is even more stripped down and basic. It has Barnes on a stream of conscious singing words loosely related to the song title, and the chorus itself has him grunting the title over the most unexciting base groove riffs yet created in this band’s already bulging arsenal of banality. Did the band cash the advance from the label and spent it on booze and weed – and a week before recording realized they had no actual material? This record certainly sounds like it. “True Carnage” appears rushed, clumsily arranged, and only getting by on the barest of essentials. To think that this is one of Metal Blade’s priority bands (along with Cannibal Corpse) makes it even more insulting. Why should fans shell out hard currency for a poorly put together product that the band in question doesn’t even care about?

Much ado was about the song ‘Sick and Twisted’, a track that features Karyn Crisis on what was promised to be a death metal male-female “duet”. Now I don’t want to sound exceedingly elitist here, but what exactly was so revolutionary about this concept? Women had been involved in the underground metal scene, death – and black metal included, long before Chris Barnes got this idea in his dreadlocked head. By the time this record rolled out of the studio, women had been involved in the scene and their own bands for a good three decades. Since the ‘80s women have been fronting death – and black metal bands, and at the time of this album German-Swedish outfit Arch Enemy were a poster child for this very thing. In the 1980s there were American death/doom metal bands as Derkéta and Mythic, and its black metal offspring Demonic Christ. In the 90s in Europe there were bands like Acrostichon, Dracena, Opera IX, Astarte and later Darkened Nocturn Slaughtercult, which were all fronted by women. Six Feet Under was just cashing in on another trend – like they always have done. Nothing to see here, really.

If Barnes was attempting to make an important statement about gender roles in extreme metal, I’m not sure what message he was trying to convey, or what the point is supposed to be. ‘Sick and Twisted’ is a gore-drenched love song, nothing more – it isn’t the kind of thing you want to use if you want to say something meaningful about gender roles and gender politics with an industry and fandom that is largely male-dominated. Hetero-normative relationships are the accepted status-quo, and a pathetic and inconsequential little ditty like this isn’t going to change anything about that. The patriarchy of and rampant sexism in the extreme metal scene is one of its many problems that need to be adressed, but Six Feet Under is not nearly eloquent enough, nor are they in the possession of then needed mental facilities for such a delicate task.

Like the album before it “True Carnage” has more effort and care put into its design and presentation than in its actual musical contents. The design and lay-out is absolutely superb on every level, and the photography and artwork matches, if not surpasses, the incredible glossy looking “Maximum Violence”. The artwork by tattoo artist Paul Booth is simply wasted on an asinine, mundane and bottom-feeding act like this. If Six Feet Under only put as much care in the songwriting and musicianship as the level of artisan craftsmanship that their presentation got, they would actually be a halfway decent band. What we have now is a mediocre band with an inflated budget, a ginormous ego and a warped sense of entitlement and importance. This is where Six Feet Under became a parody of itself, a caricature and the embodiment of underachievement, redundancy and pointlessness. From here on onward the band would descent into even more comic levels of asininity and irrelevance with the even more terrible “Bringer Of Blood”.  For my own sanity’s sake, I will not venture that deep into the looming chasms of the yawning abyss. This is where you enter at your own risk. Don’t say I didn’t warn you…