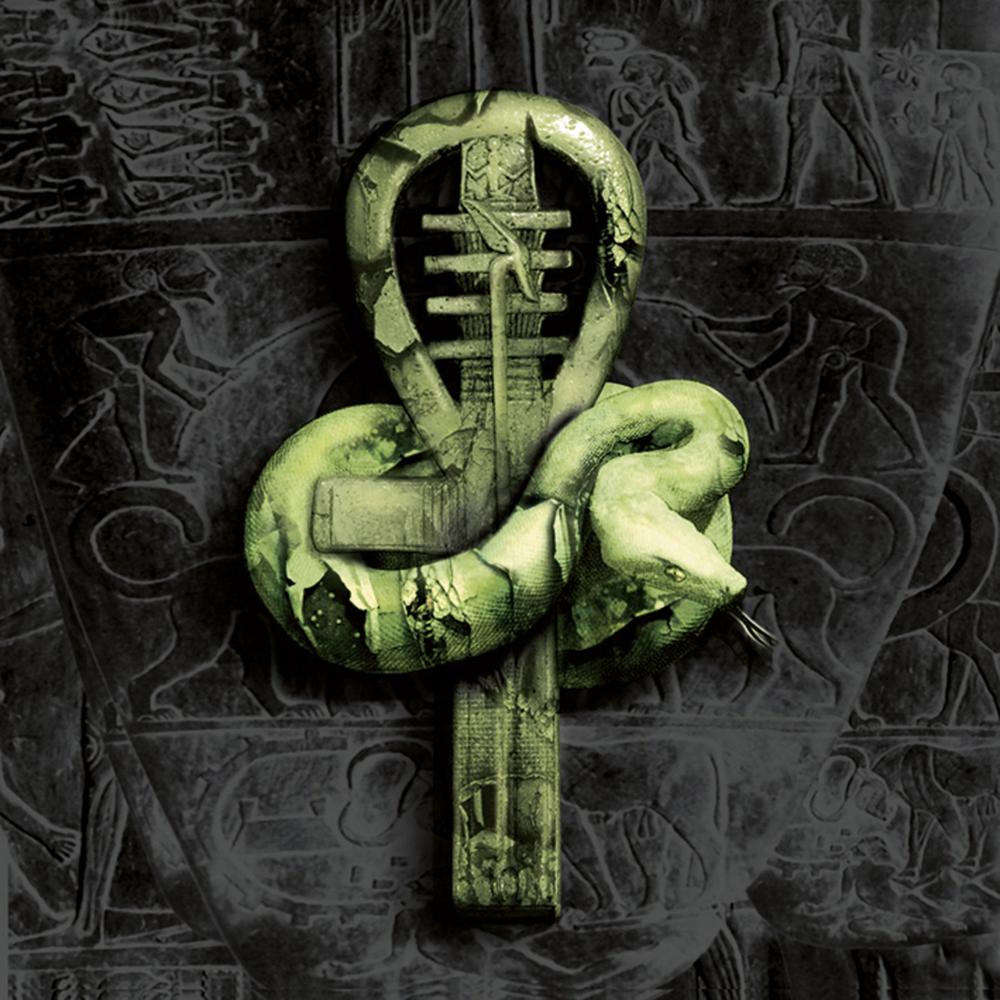 No matter where you choose to look to get an opinion, this band is spoken about in hyperbole, in absolutes and there’s a complete lack of perspective from most folks you’ll end up talking to. To get the most obvious rake out of the way: Nile isn’t remotely a “unique” or “trendsetting” death metal band in any shape or form. The band’s key members started out in Morriah, a late ‘80s low-key thrash metal formation based out of South Carolina, and it wasn’t until Morbid Angel frontman David Vincent introduced mainman Karl Sanders to death metal that the Nile concept actually came into fruition. 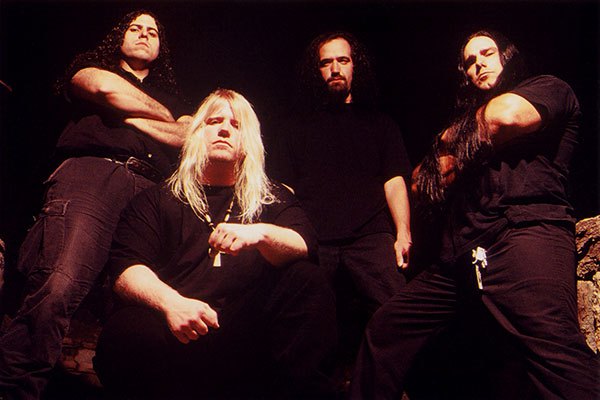 I’ll concede that Sanders found a niche, and along with Coffin Texts and that lone Nocturnus EP, they were certainly the earliest American practitioners of this particular combination. Before both of them German metal band Apophis paved the way for Egyptian flavored death metal dating as far back as the late 1980s. So, unique or pioneering Nile is most certainly not. Because, let’s be honest here for a minute, outside of the Egyptian segues/interludes and some of the melodies/scales, this band’s music is far from revolutionary. In fact there’s heavy plagiarizing from a number of significant death metal bands. Suffocation, Incantation, Immolation, Monstrosity and Morbid Angel are probably the most obvious at first glance. It’s true that Nile plays far faster and a good deal of more technical music than a number of these influential peers, but that don’t make them pioneers. No, that makes them competent. Nothing more.

This was a transitional record for this Greenville, South Carolina outfit as they had parted ways with vital key members of the last album’s line-up. It was the only album with this constellation. It was their third (of four records) for American independent label Relapse Records, and probably the one with their most potent line-up. It is also the only session to feature much in-demand Puerto-Rican percussion mercenary Tony Laureano, who had cut his teeth session work for the likes of Angelcorpse, Aurora Borealis and Malevolent Creation prior to landing this prestigious recording and touring offer. Karl Sanders (vocals, guitars) still leads the charge, along with his trusted partner Dallas Toler-Wade (vocals, guitars). Introduced on this record is local talent Jon Vesano (vocals, bass guitar) and his hulking presence is one of the strong suits of this record.

It is not hard to pinpoint exactly what makes “In Their Darkened Shrines” the most lauded title of Nile’s early catalogue. It is the transitional record in between the brutish, Incantation-on-speed earlier days and the more technically inclined later records that would follow in the wake of this album’s success. Where in the past the Egyptian soundscapes were largely relegated to intro/outro or instrumental segues, this record is the first to truly integrate them into Nile’s patented blasting fury. The band’s previously established three-way vocal interplay is also finally perfected here. On past records it was sometimes hard to tell everybody apart, but on here everybody has a distinct voice which when used in alternating verses leads to some pretty powerful results. 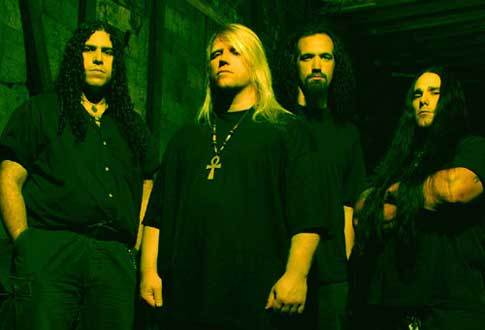 On the roster we have vocalist/guitarist and main songwriter Karl Sanders, along with vocalist/guitarist Dallas Toler-Wade (who was introduced on “Black Seeds Of Vengeance” a few years earlier) and newly acquired vocalist/bassist Jon Vesano, who had some regional success with his black metal project Darkmoon. Rounding out the line-up for this record is Puerto-Rican percussion mercenary Tony Laureano who - despite the studio presence of one Derek Roddy for the previous record - due to his dutiful roadwork in support of “Black Seeds Of Vengeance”, was the one to land the much coveted drum position for this all-important third record. According to statements by Karl Sanders a few years ago this was also the first Nile album to have a recording budget worth mentioning, supposedly at least.

The first five tracks are what really define this album as a whole, and are often named as signature tracks for this session. The album starts off with ‘The Blessed Dead’, a savage and fittingly epic sounding opening cut that exhibits Nile’s newfound skill to seamlessly segue between high-speed death metal and atmospheric Egyptian interludes. ‘Execration Text’, one of two video tracks for this record, is a less than three minutes blaster that recalls the band’s first two records, but is far more open and technical all around. ‘Sarcophagus’, the second video track, is a slow burning somewhat doom oriented track that recalls “Blessed Are the Sick” era Morbid Angel in a number of ways. ‘Kheftiu Asar Butchiu’ is another fast cut with some incredible drumwork courtesy of Laureano, before finally giving way to “In Their Darkened Shrines” most lauded cut, the colossal ‘Unas, Slayer Of the Gods’. Three more tracks separate this epic cut from the gargantuan title track that is divided into four individual chapters, one of these being an instrumental mood-setting piece called ‘Halls Of Saurian Entombment’.

Everybody is at the top of their game with Sanders writing music that is both primal in its brutality, and sophisticated in composition and additional ethnic instrumentation. Toler-Wade gets a more prominent vocal spot, and his guitar playing and solo’ing is on the same level of skill as Sanders. Vesano’s throatier grunt plays off nicely against the raspier vocals of Toler-Wade and Sanders’ indecipherable grunt. Laureano seems to have found a perfect middle-ground between the blast-oriented style of Derek Roddy and the complex fills, rolls and cymbal work of former Immolation drummer Alex Hernandez. Figure into all this the incredible speed and precision with which all instruments are played and the breakneck pace of most of the material present here, and it becomes fairly easy to see why this album is so loved by many.

No expenses were spared in the presentation of this album. The cover artwork takes the concepts of “Black Seeds Of Vengeance” to its logical conclusion and the inlay and backcover are filled with Egyptian symbols and related imagery. The thick booklet is a fold-out with extensive liner notes for each song, the lyrics and production credits. As mentioned earlier two promotional videos were shot for this record by acclaimed director Darren Doane making this clearly a priority release for the label at the time of its release. Nile would record one more album with Relapse Records (and largely the same line-up) with “Annihilation Of the Wicked” – before signing with German conglomerate Nuclear Blast Records. This is the last truly vital Nile recording any reasonable metalfan should own. “Annihilation Of the Wicked” is cut largely from the same cloth, but it is not nearly as engrossing and compelling, nor as epic sounding as this record. For the next three records after this Nile would tone down the Egyptian instrumentation and atmospheric segues in favor for a more brutal and straightforward sound. I’m personally not that fond of this band’s catalogue post-“Annihilation Of the Wicked” as it eschews atmosphere for absurd levels of speed, density and/or technicality. The band would also venture into more melodic territory and drag out their songs too long for no discernable good reason after “Annihilation Of the Wicked”. As things stand, this the band’s magnum opus and their ultimate statement of intent.