The last album of Disgorge’s original run “Parallels Of Infinite Torture” heralded the end of an era. By the time it saw release in 2005 the style of death metal that Disgorge specialized in had ran its natural course. Once again fronted by a different vocalist it is the last of four records that the band released from 1992 to 2006. “Crown Of Souls”, the last release of the Jacoby Kingston era from fellow California act Deeds Of Flesh, was released the same year, and further evidenced this. In truth, the earliest sign of stagnation for the style was released a year prior with “Methods Of Execution”, the third and final record from the original run of Knoxville, Tennessee power trio Brodequin, who played a similar concussive style as Disgorge. 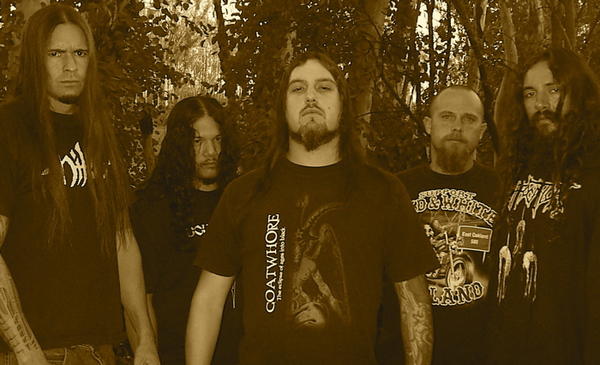 “Consuming the Forsaken” is the first Disgorge album to not feature long-serving vocalist Matti Way. In its classic constellation, which lasted from 1992 to 2006, Disgorge released four albums on a variety of labels, of which this is the second. The working title for the album was “Dissecting Thee Apostles”. The album is a loosely narrative and semi-conceptual effort about unspecified forces of evil conspiring to kill Christ and his congregation of apostles, thus effectively cessating the birth of Catholicism. Musically consistent with its semi-legendary predecessor it paved the way for the band’s last album “Parallells Of Infinite Torture”, which would push the adopted direction towards its logical conclusion.

After the incoherent, and supposedly shocking gore of “She Lay Gutted” for this record Disgorge opted for an anti-religious concept. The change in subject matter isn’t entirely unexpected as ‘Revelations XVIII’ already hinted at such direction earlier. The lyrics are surprisingly well written for the style, recalling the early works of New York veteran genre act Immolation, and to a lesser degree Doug Cerrito-era Suffocation. Like his predecessors A.J. Magana (vocals) is loud and viscerally intense, but not very remarkable otherwise. What his grunt overcompensates in sheer guttural depth and range it lacks in expressiveness, enunciation and emotion. The admittedly strong lyrical concept, which uses established events from scripture, loses much of its power due to the sheer banality of Magana’s forceful delivery. 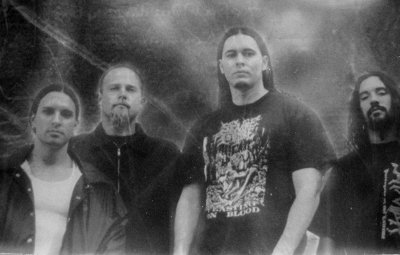 ‘Manipulation Of Faith’ and ‘Consecrating the Reviled’ offer up more engaging guitar work and more varied drumming after two completely interchangeable tracks opened the album. A music video shot was for ‘Consume the Forsaken’, although ‘Dissecting Thee Apostles’ was clearly the stronger track, and more deserving of the treatment. The grinding slow part towards the track’s conclusion harnesses more feeling and atmosphere than the rest of the album is ever able to conjure. ‘Denied Existence’ proves that Myers can measure himself with the classic death metal skinsmen if he ever stopped blasting constantly. His constant usage of either single or double kickdrums invalidates their function as they have little effect within such context. ‘Divine Suffering’ ends with a similar slow grinding part that is high on tension and atmosphere, adding to the macabre effect when Magana’s monstrous vocals that are finally put to good use.

A critical fault carried over from the uneventful “She Lay Gutted” is the focus on brutality and percussive density over memorable, involving songwriting and recognizable hooks. The change in lyrical direction, not entirely unexpected in itself, is a step in the right direction - but on the musical side nothing critical has changed. As a result far too few tracks stand out, even though the band had become better musicians its songwriting approach didn’t grow along making the change in lyrical direction only partly succesful. Both the guitar work and the drumming are of an exceptional level, but both spent inordinate amount of time pulling into opposite directions of each other. Sanchez and Marlin would feel right at home in a band that played dissonant, unholy sounding death metal (pre-“Unholy Cult” Immolation, Sylvain Houde era Kataklysm, or the early works of NY scene institution Incantation) whereas Myers and Magana lean more towards the traditional California death metal sound that stylistically similar to Jacoby Kingston-era Deeds Of Flesh.

Like the album before it “Consume the Forsaken” is almost completely bereft of any atmosphere, hateful or otherwise. None of the chord progressions are particularly evil sounding, and the band is more concerned with battering the listener into submission with nearly constant percussive chaos than with writing memorable songs. The album is successful insofar that it delivers a full-on assault on the listener’s senses. That only a few tracks stick with the listener after is to the album’s everlasting detriment. As one of the main propagators of the brutal subset Disgorge moreso than its peer Deeds Of Flesh relies on listener disorientation to craft some kind of experience out of its album. Linear as though they might be at least the Deeds Of Flesh trio still wrote actual songs with recognizable beginnings, middles and ends. It wouldn’t be until the next album that Disgorge reinstated its demo sound/direction and focused on writing songs again.

In terms of production “Consume the Forsaken” is a step up from its predecessor on all fronts. For the first (and, so far, only) time Disgorge recorded at Studio One in Racine, Wisconsin with Chris Djuricic handling the production. The guitar tone has gained a lot of clarity, texture and definition. The drums sound powerful and commanding but never overly processed. The mastering was done at Imperial Mastering by California scene veteran Colin Davis. Texan tattoo artist Jon Zig was once again tasked with creating the artwork. The abstract artwork isn’t quite as horrifying as the canvas he created for the previous album. Ultimately this artwork is far more interesting because it sidesteps the triviality and mundanity of the band’s other gore-inspired artworks. The layout this time around was handled by Derek Boyer, and it is an improvement on all fronts.

As far as presentation goes “Consume the Forsaken” outclasses “She Lay Gutted”. 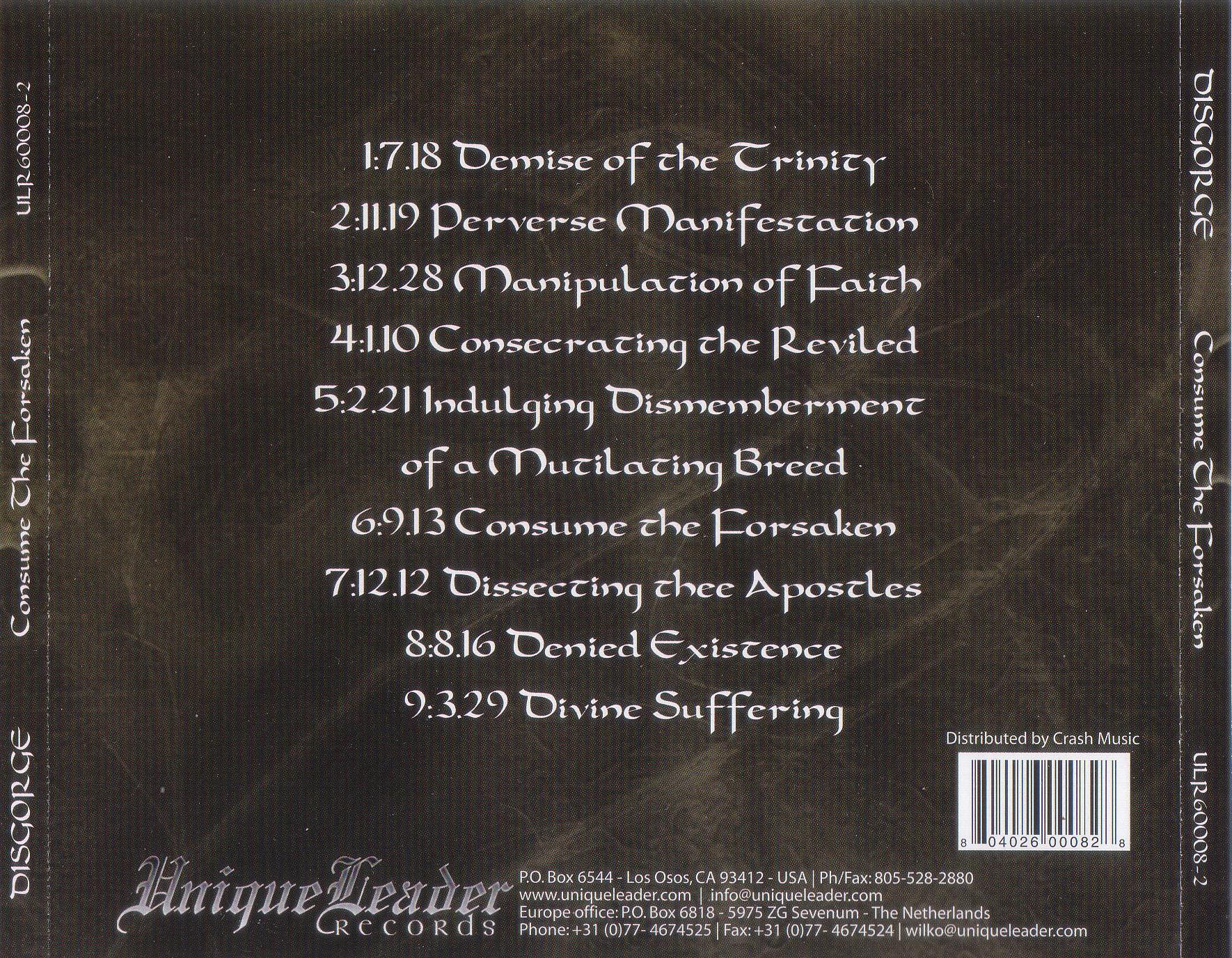 The complete lack of motifs in the music make it hard to guess what exactly Disgorge intended to convey with the record as each track is virtually interchangeable with the next. There’s no journey to be had, and the album doesn’t build towards a crescendo with a signature song. Impressive from a mere technical standpoint (considering the amount of skill it requires to memorize and play these songs) “Consume the Forsaken” lacks both in memorable songwriting and in creating an atmosphere for the listener to submerge in. It was something fellow Californians Deeds Of Flesh was able to succeed in while operating within a very specific and narrow genre perimeter. Although both bands started around the same time both took different approaches to the death metal genre. To its detriment Disgorge focused on other things besides writing recognizable songs, an ailment that would continue to plague them through out their career. Thankfully this album’s successor would at least attempt to shake things up creatively a tiny bit…