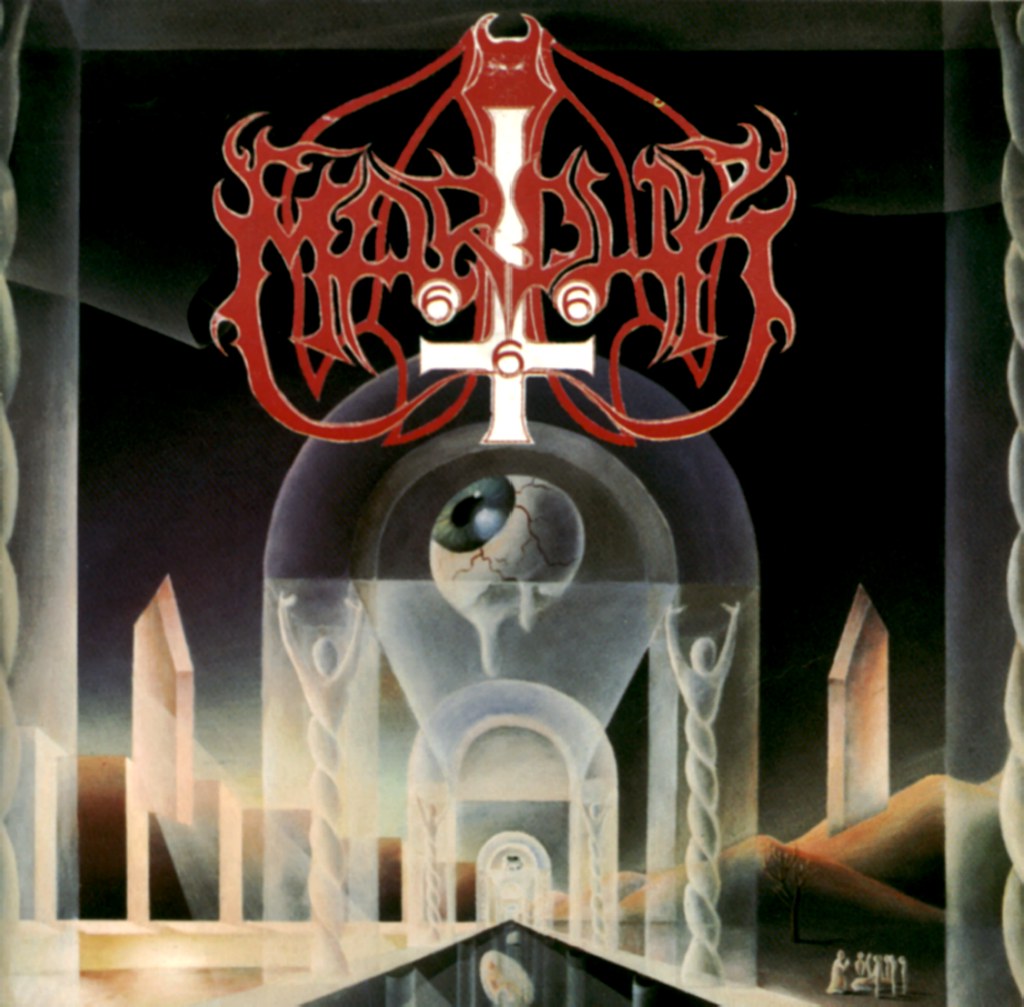 It is often forgotten in the mainstream metal consciousness that Marduk, arguably one of the hardest working entities in the industry, was once one of the many darker sounding death metal upstarts hailing from the ever-fertile soils of Sweden. The band at this time consisted of founder/lead guitarist Morgan Steinmeyer Håkansson, vocalist Andreas Axelsson, bass guitarist Richard Kalm, second guitarist Magnus ‘Devo’ Andersson and drummer Joakim Göthberg. “Dark Endless” was the first of three efforts to be recorded at Hellspawn Studio (a later incarnation of Gorysound Studio before it changed its name to the popularly known Unisound Studio) with prolific producer Dan Swäno.

As many of the second wave bands the transformation Marduk went through from a particularly barbaric death metal band into a full-blown black metal one was a gradual process. Over the course of its first three records the band experimented with tempos and moods. It wouldn’t be until its fourth record that the band truly cemented its newfound high-speed black metal sound. On its first album “Dark Endless” Marduk was an atypical death metal band, conforming to neither the Stockholm, Sundsvall or Gothenburg conventions of the genre. Like notable American institutions Autopsy and Deceased, Marduk’s drummer also doubled as vocalist. While lyrically clearly following the nascent black metal philosophy, musically this is still death metal – even though it hardly sounds like anything around at the time. That is what makes it so strong. 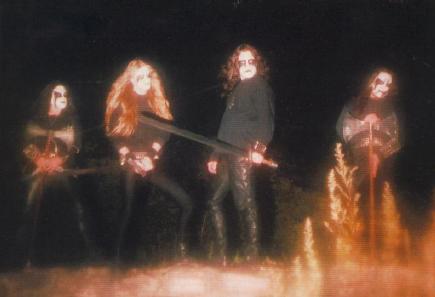 On its debut Marduk consisted of lead guitarist Morgan Steinmeyer Håkansson, Andreas Axelsson on vocals, bass guitarist Richard Kalm, second guitarist Magnus ‘Devo’ Andersson, and drummer Joakim Göthberg. Like many of its No Fashion Records label mates Marduk played a darker, more evil sounding death metal variant, not unlike a hybrid of the styles similar to Dark Funeral, Decameron and Unanimated. No Fashion Records itself was a subsidiary of death metal label imprint House Of Kicks Records. Much like the Black Mark Productions label imprint, whose most famous export was proto-black metal project Bathory, No Fashion Records helped introduce a number of important institutions to the global metal scene. Most prominently among these the burdgeoning force Marduk, and the stylistically similar Dark Funeral. Next to the heavily Iron Maiden indebted Dissection the label launched doom metal combo Katatonia, and melodic death metal band Lord Belial. Both Marduk and Dark Funeral would eventually acrimoniously split from the label, and battle it in court over publishing – and copyrights from their respective releases on the imprint.

Like so many death metal records of the time “Dark Endless” is introduced by a rather forgettable one minute-long intro called ‘The Eye Of Funeral’. The first real track ‘Still Fucking Dead (Here’s No Peace)’ sounds like a better developed take on “Deathcrush” era Mayhem, and the lyrics include references to legendary proto-metallers Hellhammer in particular. That there was an ideological affiliation with Norwegian band Mayhem is further cemented by the fact that Marduk uses various working titles of that band’s early songs as songtitles on this album (and its successor) as a sort of tribute. That the band draws from a variety of influences should come as no surprise. ‘The Sun Turns Black As Night’ and ‘Within the Abyss’, for example, sound like vintage Obituary or Autopsy in its unearthly ghoulishness and gloomy dirge tempo. The latter even has a brief bass guitar break. ‘The Funeral Seemed To Be Endless’ sounds like an early Death, or Malevolent Creation track with concentrated blast sections and unsettling tortured vocals.

‘Departure From the Mortals’ and ‘The Black…’ lay the groundwork for Marduk’s patented high-speed black metal sound that they would cultivate and perfect over the next two records following this debut. The latter song does have some of that crunchy riffing which bands like Unleashed and Necrophobic built their entire careers around. Then there’s the dirgey closing track that sounds entirely different than everything that came before. ‘Holy Inquisition’ sounds like “The Dance Of December Souls” Katatonia with its morose arrangement of power chords, sorrowful melodies and doom metal-like trudge. The variety of influences can probably be rationalized by the fact that most of these songs were written a few years prior to their recording. What does stand out is the surprisingly diverse and variated guitar work despite there being only one brief lead/solo section towards the tall end of ‘Holy Inquisition’ – and nowhere else. It’s mind boggling to imagine that Marduk would rely on one type riff for future albums, as here Håkansson references various American - and European sources for riff construction.

What sets the first era of Marduk (all records up to and including “Opus Nocturne”) is the light usage of keyboards and organs, something which the band would categorically refuse to use for atmospheric purposes from “Heaven Shall Burn…” onward. It is rather telling that Marduk, who had no problem using keyboards and organs in the past, suddenly dismissed the usage of atmospheric enhancements in 1996 once the symfo black metal branch seemed to win in overall popularity. The vocals are also far more diverse and emotive using shrieks, whispers, grunts and spoken word through out various parts of the album. The agonized, piercing vocals are reminiscent of At the Gates’ “Gardens Of Grief” demo/EP. Marduk was actually a quaint little death metal band that even this early was poised to make a mark. Even though it is only heard in bits and flashes here in terms of songwriting the band’s trademark intensity is already accounted for. As one of the No Fashion Records alumni they too sounded far more misanthropic and sadistic in comparison to the average Gothenburg or Stockholm death metal combo.

The album has a history of re-releases since the original No Fashion Records print. It was first re-issued by American label imprint Necropolis Records, later (in 2004) it was re-issued once more (without the band’s approval) by Black Lodge Records as a digipak. Eventually, the band re-issued an expanded version through its own label imprint Blooddawn Productions, in cooperation with its then-contractor Regain Records in 2006. This band-approved print expanded on the original by adding the forementioned intro ‘The Eye Of Funeral’ and five rehearsal tracks of the era – this version is the subject of our review. It was re-issued one more time on Century Media Records in 2012 in the same version as the expanded Blooddawn Productions that was released six years prior.

“Dark Endless” was recorded at Hellspawn Studio with producer Dan Swäno in a mere four days. As a result there’s a certain spontaneity and urgency that the band would never be able to recapture. The record is blessed with a thick early 90s death metal production that has a prominent place for the booming bass guitar. The album is adorned by spectacular artwork by Daniel Vala (a member of pioneering Swedish death/black metal outfit Obscurity), and it is the sort of vista that Marduk would never be able to recreate in its extensive discography. While Marduk was certainly a lot more barbaric than its contemporaries its sound at this point was a mere imitation of established American – and European bands. “Dark Endless” is solid in its own right, but its holds little significance outside of its historical importance in the band’s canon. At this juncture there were far better albums to be heard, be they “Shadows In the Deep”, “Like An Ever Flowing Stream” or “The Red In the Sky Is Ours”.  That doesn’t take away from the sheer power of “Dark Endless” - it just serves to remind that Marduk wasn’t always the force of nature it is known as today. They had to start somewhere, and in truth what they did here was far more interesting than the sound they would become known for.