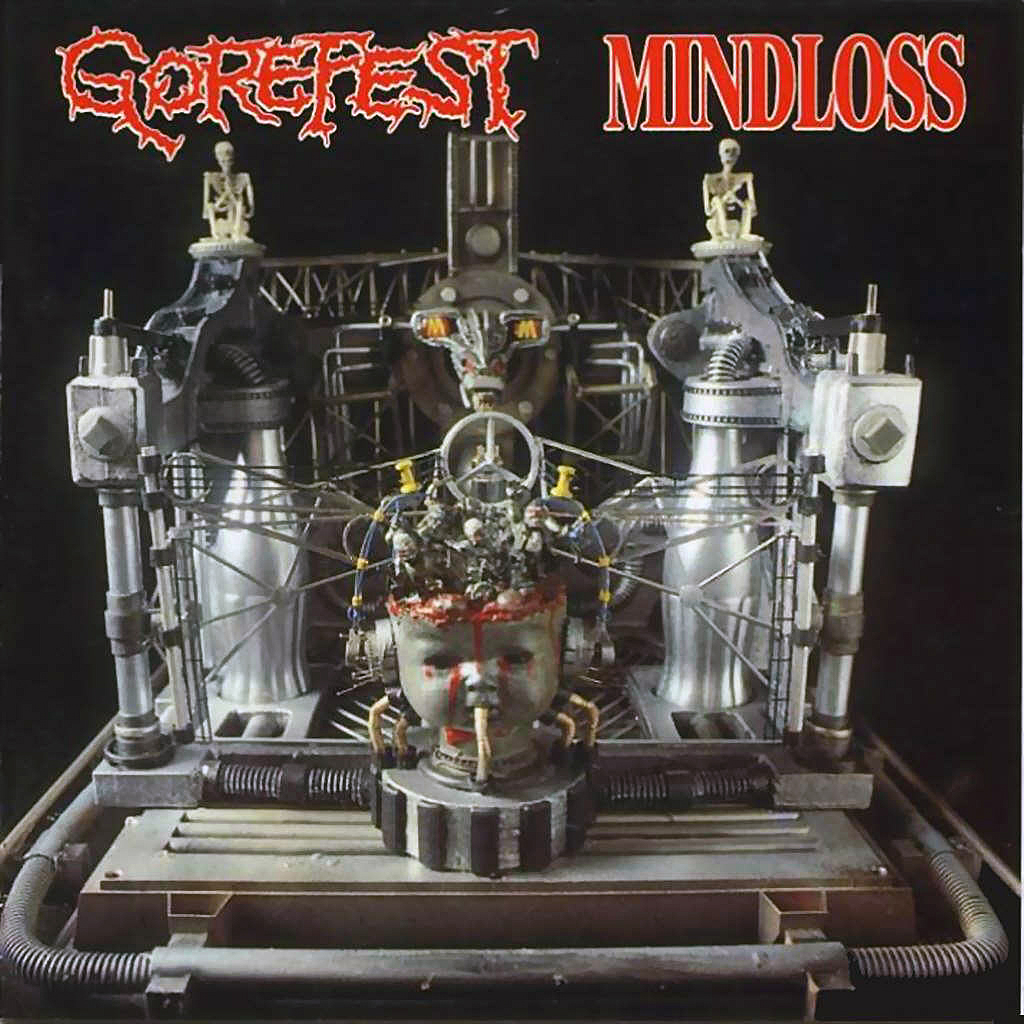 Gorefest was, along with bands as Asphyx, Sinister, Acrostichon, and Thanatos, among the earlier proponents in the Dutch extreme metal scene. While other bands played a good deal faster and more technical, Gorefest always was more like their British peers in Bolt Thrower. Above all else the band concentrated on writing catchy, groovy tunes that stayed in the memory of the listener. This album came to materialize after the band’s second demo “Horrors In A Retarded Mind” (from 1990) led to an extensive tour with British grinders Carcass. Label interest had been there since the “Tangled In Gore” demo session from 1989. This is also the only album to feature the two forgotten Gorefest members Alex van Schaik (guitars) (from thrash metal upstarts MOT), who wrote the lion’s share of material present on this session, and Marc Hoogedoorn who sits behind the drum kit for this album. 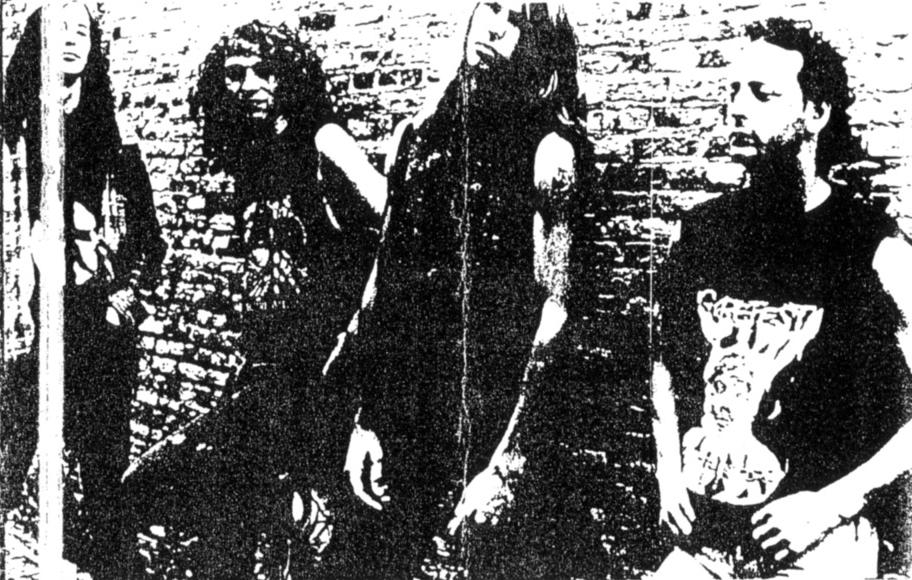 Gorefest was surprisingly musical in doing what it did. There was memorable lead/solo work abound everywhere here. The drumming, besides keeping the beat, also had some great fills and footwork – but Hoogedoorn is never a showoff or obtrusive. Jan-Chris’ roaring grunts combined the best of Napalm Death’s Mark “Barney” Greenway and Chris Reifert (Autopsy) vocal styles. The riffing mostly culls from what the Americans were doing at this time, with influence taken both from then-nascent death metal movement as well as early thrash metal. There's lead/solo work by both guitarists, but Frank Harthoorn in particular, would come to define this era. This material isn’t what you’d call technical, but that never was the point. The band’s debut “Mindloss” is probably the most punishing and darkest record of their catalogue, but it is little more than a curious relic from their demo phase. It is truly unique in the band’s catalogue that way.

As was the tradition in the early ‘90s the record starts off with an intro, aptly called ‘Intro’ which is made up of pitch-shifted industrial and mechanical sounds, guitar noise and Jan-Chris screaming in bouncing echo like he is in extreme pain. It is quite eerie and unsettling. Intros like these were characterizing for many of the classic death metal albums of this era. It’s one of the practices that were sadly lost in time as bands went to great lengths to play heavier, faster and more technical. The spooky, semi-industrial intro sets up the album in a fitting manner, and while the opening song ‘Mental Misery’ has little to do with the rest of the album - musically as well lyrically - it fits surprisingly well with an album that is nothing more than a semi-professionally re-recorded, glorified demo compilation.

‘Mental Misery’ is the only new track of this session, and those who love splitting hairs will notice that the lyrical concept is already moving away from the Cannibal Corpse and Carcass inspired gore/splatter and horror themes of the band’s demo days. Another thing to notice is that this cut is dynamically richer than the ones that follow in its wake. ‘Mental Misery’ twists and turns venomously, and while the overriding format is that of groove death metal, this song lays the entire foundation of the band’s second album “False” on every important level. The first steps were taken here with this song. You can just feel the band wanting and waiting to break out of the limiting and limited creative corner they had painted themselves into. It would take a couple of years and a few line-up changes to reach that lofty goal, but at least they were trying, and not afraid to do so.

Death metal was still in its formative stages at this point, and a lot of material here is played at a leisurely pace with prominent slow passages that these days would probably be passed off as doom metal. Everybody gets their moment in the limelight, and so you’ll hear Jan-Chris’ thundering bass guitar introduce the sordid love song ‘Tangled In Gore’ and Hoogedoorn gets his moment of glory with ‘Decomposed’. Everything is evenly distributed. Slow passages segue seamlessly with faster and, dare I say, blast parts. Melody emphasizes and accentuates the brutality, and the clear-cut structures serve to add to the overall heaviness of the procedure. The bass guitar can be heard, and even contributes actively to the material at hand. The drumming is functional, but hardly the stuff of legend. I have no idea what became of Marc Hoogedoorn after his departure from Gorefest, but I’m sure he’s somewhere playing those drums and rocking away.

There are a few lovely themes to be found on this record. ‘Foetal Carnage’ is a graphic pro-abortion song, and in album highlight ‘Loss Of Flesh’ Jan-Chris loudly states the sobering thought: “I was born alive / isn’t that punishment enough?” The recurring theme through out this record is rotting in its various stages, and so you’ll have ‘Putrid Stench Of Human Remains’ and ‘Decomposed’ dealing with that. ‘Horrors In A Retarded Mind’ and ‘Loss Of Flesh’ are about suicide by self-mutilation, and serial killer fanatics can get their fill with ‘Confessions Of A Serial Killer’. The band’s self-titled opus ‘Gorefest’ is about eating the dead, and having sex with them – or both at once, as is the case here. No wonder the band would move on to more earthly and socio-political themes after they got this out of their collective system. I feel dirty just typing the synopses here for your perusal, just try and imagine how they feel. This stuff follows them around to this day. Happy thoughts!

The difference in writing and playing isn’t very surprising given that with this album the core duo had two different writing partners in Alex van Schaik (guitars) and Marc Hoogedoorn (drums). Jan-Chris de Koeijer (vocals, bass guitar) and Frank Harthoorn (guitars) man their known positions, but given that half of these songs were written by original guitarist van Schaik it is perhaps understandable why a lot of people who were introduced to Gorefest later don’t like this album very much. And what is this style exactly, you wonder? Well, for one “Mindloss” is very Autopsy inspired with its sludgy guitar tone, and barbaric but tasteful drumming. This record is bass-heavy too, very reminiscent of “Severed Survival” and “Mental Funeral” that way. Jan-Chris also has a very wet inflection here that will occasionally remind of Chris Reifert.

“Mindloss” will forever remain the album that people skip, and truthfully there is no rational reason to do so. Gorefest would come fully into their own with the follow-up “False”, which introduced the most widely known line-up for the band. There are a few missteps on this album, like there are with any release – but overall it is a serviceable debut for an uprising force. The fact that this album is often neglected speaks more of people's love for the status-quo than of the merits of this album. The album was originally released by Dutch label Foundation 2000, but re-issued a year later by American-German conglomerate Nuclear Blast Records upon their acquisition of Gorefest. There were more brutal alternatives around at the time, whether they were the more percussive-oriented Altar, the Black Sabbath inspired death/thrashing Acrostichon, the madly thrashing Thanatos or the occult sounding Sinister. Gorefest played their hearts out, and while they were in the same genre as their peers, they managed to give it a twist all their own. Carcass’ fingerprints are all over it, but only in its basic construction. Nevertheless its archaic production, and quircky cover art, “Mindloss” remains a fascinating document into the younger years of Holland’s more divisive and respected death metal institution.