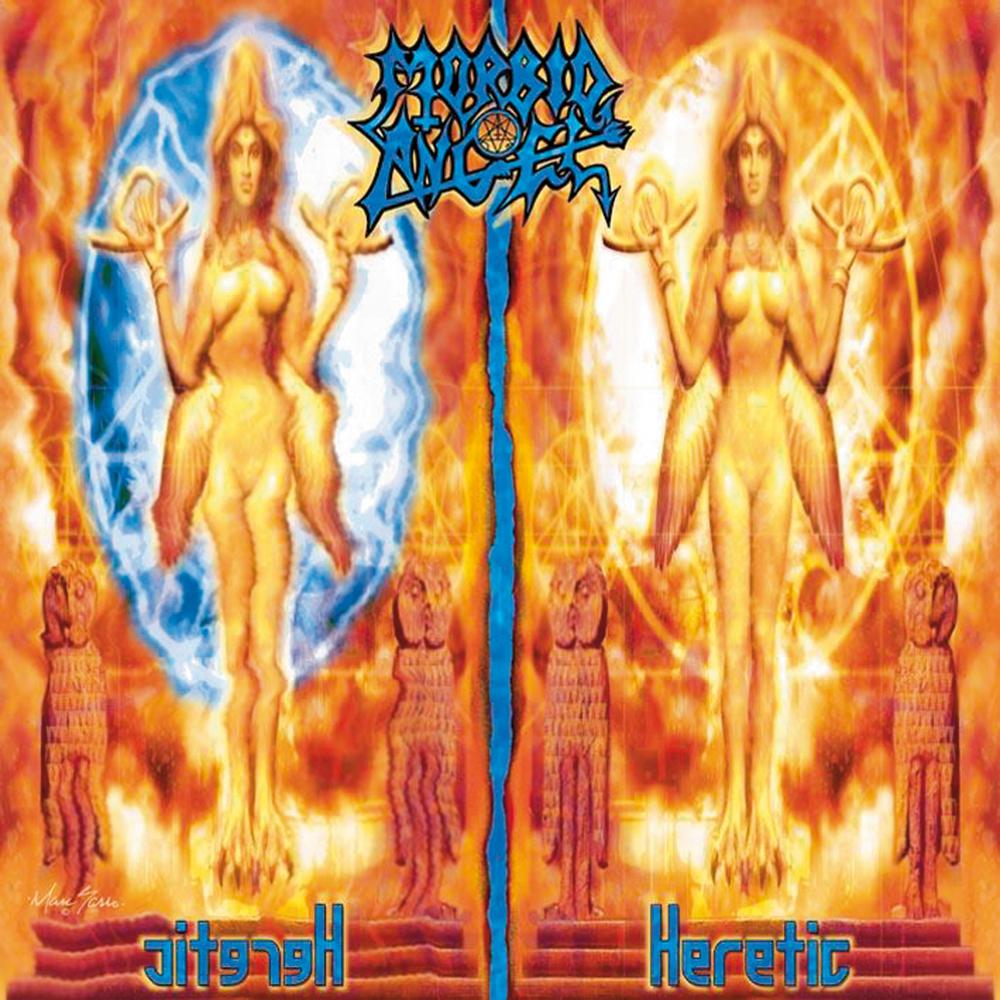 “Heretic” is on all aspects a milestone is the career of Tampa, Florida death metal institution Morbid Angel. It was the third and final album to feature Steve Tucker on vocals and bass guitar, it was the last for them on long-time contractor Earache Records  (its lacking sales figures led to the band’s termination of contract with said label) and the first to be recorded entirely at Diet Of Worms Studio with engineer/producer Juan “Punchy” Gonzalez, Morbid Angel’s resident live sound engineer. It’s the band’s least appreciated and widely hated record, for any number of perfectly sound reasons. Nigh on a decade would pass before Morbid Angel would enter the studio to lay down another album. Sometimes you just wish the band had packed it up after this debacle.

To wit, Tucker had bowed out of Morbid Angel in 2001 due to personal reasons and the wish to concentrate on his super-group Ceremony, which would ultimately not transpire. Jared Anderson (Hate Eternal, Internecine) had a brief stint replacing Tucker for various tour commitments, and only in 2002 would Steve Tucker re-enter the Morbid Angel fold, after apparent talks with David Vincent fell through. That his vocal performance here sounds tired and exhausted isn’t very surprising. The poor guy is only called upon to perform when the most known frontman isn’t available. Not exactly the most inspiring place to start from. No matter what Tucker will always lose in the end. 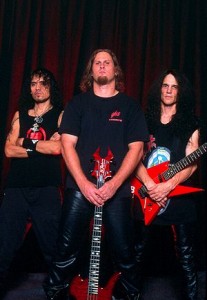 The first to notice is just how underproduced, basic and rough this album sounds. In the press cycle surrounding this album lead guitarist Trey Azagthoth was talking about a new and revolutionary way of recording guitars for this album – and how it would supposedly change the metal scene in its wake. That the guitar tone is then the most muddied, dry and impotent the band had yet experienced makes it all the more disconcerting. The leads/solos are in fact produced with more care than the riffs. Tucker’s bass guitar cannot be made out under the fuzzy mess that is the guitar tone. Sandoval’s drum kit fares slightly better than the other instruments, but a second coming of “Formulas…” or “Covenant” this certainly is not. Production values similar to those of “Domination” or earlier are even further away from this point onward. As a proof-of-concept/demo session, this would have been passable. As a high-profile, label-backed release from the most important North American death metal band, it is baffling that Earache Records let this disc go to the presses without intervention, or discussion.

Opening track ‘Cleansed in Pestilence (Blade of Elohim)’ is an unremarkable opener that besides the presence of the always-esoteric sounding leads offers little to the memory banks. ‘Enshrined By Grace’ was standard Tucker-era fare at this point, and besides the serpentine hisses of Azagthoth there really isn’t much to hear. The fact that this cut was chosen as the lone video track for this record speaks volumes of the morass of half-assed concepts, tiresome ideas and defeatist attitude and execution that litter this last ditch attempt for the band to remain relevant. In the light of more discerning tastes of its target audience and an ever-changing scene that respected them as pioneers, but no longer revered them as a guiding light, a benchmark of quality or a setter of standards.

Why exactly is this album the embodiment of defeatist attitude? Consider the following. Nearly 60% of this record is made up of instrumental fodder, ergo egotistical masturbation. Incoherent songwriting, poor flow and a lack of unifying vision make up the remaining 40% of this sorry waste of resources and talent. The first three tracks show a reasonable will to recapture the past magic, but these tracks (while the best of this session) would be considered weak in comparison to the band’s first three records, and even as b-sides to the widely scorned “Domination” they even pale. The band wasn’t at the top of its game, and no longer pushing itself to the very limits of their abilities – complacency and laziness run rampant through this record, and the band has never really recovered from the loss of its key secondary members, be they Erik Rutan, or Richard Brunelle. The input of both was vital in the band’s best material, and the absence of their creative input makes this all the more clear, even to the untrained ear.

The biggest problem for this album, as touched upon briefly earlier, is its construction and coherence; both which are lacking. All songs contain individual parts that are nothing short of impressive on their own terms, but lack the surrounding framework to truly blossom. The lack of an over-arching concept is also largely to blame for the lukewarm reception this album tends to get. Where past records had a specific idea or theme that they worked around, “Heretic” is just a collection of songs with nothing to bind them together. It feels artificial, contrived and hollow – the very thing Morbid Angel used to rigorously combat in the past. Even the song titles sound fabricated and empty. ‘Praise the Strength’, ‘Curse the Flesh’, ‘Beneath the Hollow’ and even, I kid you not, ‘God Of Our Own Divinity’. That last title reeks of disinterest and contempt of the blackest kind. It is of little consolation that Karl Sanders (Nile) plays the outro guitar solo on this cut. Why not have him do some guest vocals while we are at it? This is the band that wrote the classic hymn ‘God Of Emptiness’ and followed it up with ‘God Of the Forsaken’ just three years prior. Might as well deliver the final blow and conclude this loosely conceptual trilogy of sorts with the cashing-in on nostalgia and past glories mindset usually associated with long-running has-beens as Megadeth and Metallica.

The six instrumentals that fill up the tracklist are of varying quality, and are hardly as vital to the experience in comparison to the ones on the classic early albums. The key members get their time in the spotlight too. ‘Memories Of the Past’ is Azagthoth’s attempt to do an instrumental on the level of Steve Vai, Yngwie Malmsteen or Eddie Van Halen – which both disappoints and feels widely out of place on an album already on shaky ground. ‘Born Again’ is the outro guitar solo to “Gateways to Annihilation” track ‘Secured Limitations’. Not exactly the most creative thing you expect to hear from one of the most acclaimed guitarists in extreme metal. ‘Drum Check’ is Sandoval’s moment of glory. While not exactly shabby or lacking, it begs the question why it couldn’t be edited and used in an actual song on the album. Notable is also that ‘Drum Check’ has a better drum sound than the rest of the album. Then there are the numerous hidden tracks, including the pointless ‘Doomcreeper’ that is nothing more than an instrumental re-run of ‘Beneath the Hollow’. Why was this included again, to pad out the running time?

The production, or lack thereof, is a hot topic and much maligned (rightly so). The guitars sound fuzzy, washed out and are drenched in copious amounts of needless reverb. The bass guitar is completely inaudible for most of the album’s duration – only Sandoval’s drums fare slightly better, but only by a tiny margin. Where the drums sound the best of all instruments, they are still underproduced and thin sounding – and in comparison to the earlier classic albums the tones of the kit feel artificial, flat and unnatural. Then there’s the fact that the whole just doesn’t mesh together well. I can’t point out what exactly is amiss here, but the instruments sound as if they play ‘next to’ or ‘besides’ each other, and not in unison as they are supposed to. The whole product sounds as if it is about to become undone, ready to fall apart at any moment. That can’t possibly be how it was intended. The production sounds cheap and amateurish in the worst ways imaginable – and this coming from the most important death metal band in North America makes it even more head scratching and unforgiveable. Just imagine what “Heretic” would have sounded like if the band actually cared about the product they put out. Or had they had a producer that busted their collective balls and pushed them to the limits of their skill. I sometimes wonder what this album would have sounded like had it been recorded at Sonic Ranch Studio (Texas), Nightsky Studio (Maryland), Studio One (Wisconsin), or more regionally and acclaimed facilities such as Audiohammer, Castle Ultimate, Fantasy Studio, Trident or Sharkbite Studio. 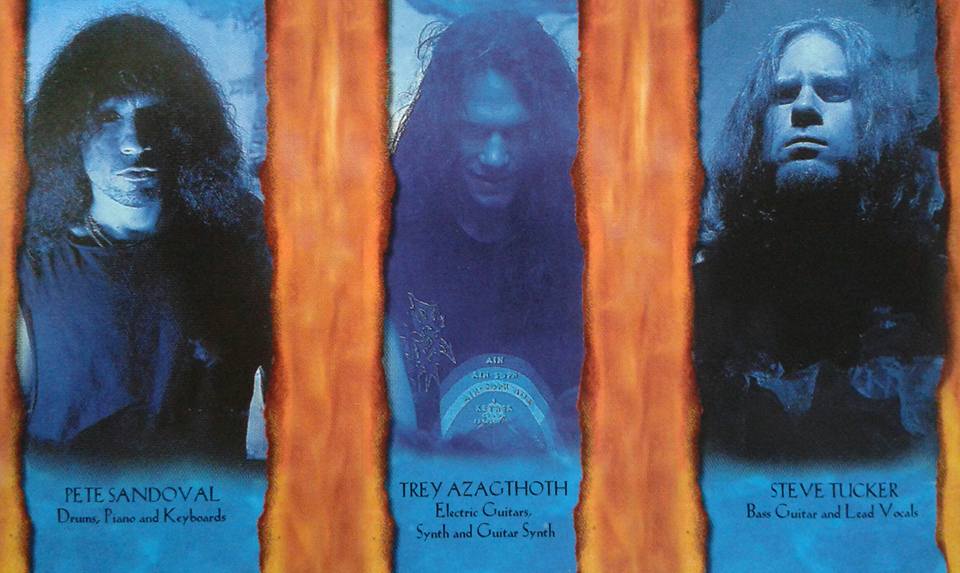 Finally, this whole album is nothing more than an extended ego trip for a band well over its due date. As we have come to expect of Tucker-era Morbid Angel the booklet includes liner notes detailing the concept of the album. In these two pages of nonsensical gibberish Azagthoth writes about doctrines, belief systems, paradigms shifts and breaking out of self-imposed limitations and embracing the Creative Force. Everybody knows that Trey was heavily invested into the learnings of Deepak Chopra at the time. Which is all well and good, but despite the weird capitalization he ends his little monologue with the sentence: “whooo hoooooooo let’s have some fun in this game called life!!!!” I know not if he was inebriated or chemically altered when he wrote this, but all the philosophical posturing surely isn’t helped by this misplaced and utterly futile attempt at humor. It undermines his internal monologue on a sour note, reducing it to nothing more than an image and a farce, rather than a reflection of his interior. The artwork by Marc Sasso might suggest this is some Buddhist work, but alas it is not.

The fact that the album was named after one of the band’s early monikers speaks volumes of the egocentrism and has-been-ism on display, and it is testament to exactly how far the band had fallen from the halcyon days of the A, B and C records. At the end of the day “Heretic” is the swansong of a once unattainable and trendsetting band that got swallowed whole by its own ginormous ego. A dire lack of critical thinking and foresight, either by the band, its sycophantic entourage or the people at the label too busy with the bottom line and profit, resulted in this band’s most diluted, confused and poorly executed album up to that point. It’s not to say that “Heretic” is unforgivingly awful, because it is not. It is possible to love this album, given that you approach it on its own terms and not let yourself get clouded by the usual expectations. The sad fact is that Morbid Angel at this point in time was being succeeded and outplayed by its followers. Bands such as Behemoth, Lost Soul, Mithras, Nile, Rebaelliun and Zyklon all had various albums released at this point, which were heavily indebted to this band, and all those did the Morbid Angel sound better than the very band that inspired them.

There’s a reason why Morbid Angel would hide for the next eight years. This is it.