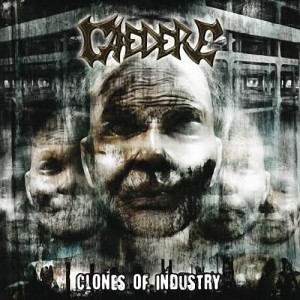 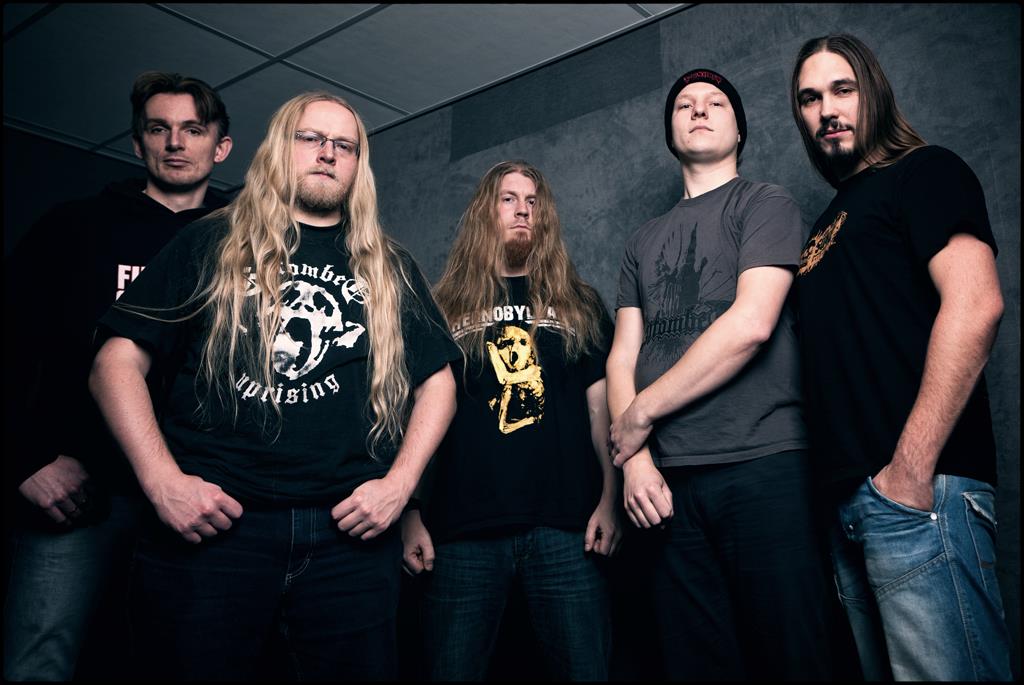 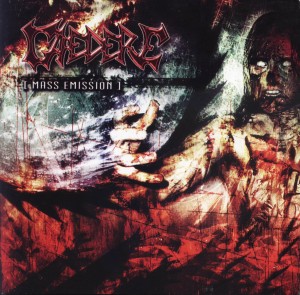 “Mass Emission”, the somewhat unassuming debut of Dutch death metal combo Caedere, lends itself to the assertion that it was inspired at least in part by American – and European institutions of the genre. In particular the likes of “Stabwound Intercourse” era Gorgasm and “Feasting On Blood” era Severe Torture. Not a record to concern itself with subtleties or ornamental enhancements, here Caedere functions as a blunt object. As such “Mass Emission” isn’t an album to waste time, and gets to the point immediately.

Caedere was formed in 1998 in Twente-Overrijsel, Holland. In its original constellation the band consisted of founding members Niels Ottink (guitar, vocals), Herbert Cats (bass guitar) and Michiel Lankhorst (vocals) along with a different drummer, and second guitarist. Notable is that it wasn’t until the joining of former Fluisterwoud percussionist Sjoerd Modderkolk that the band would make significant progress in the artistic - and musical sense. Caedere is, fitting for a death metal band, Latin for “to kill”. Prior to debuting internationally with “Mass Emission” the band self-released and distributed the “Gore to Banish Fear” demo/EP, whose four tracks (‘Human Decay (Dark Future)’, ‘Corpse For the Theft’, ‘Close to Decomposing’ and ‘Rope to Die’) reappear in re-recorded form on this album. ‘Human Decay (Dark Future)’ had its title shortened to just ‘Human Decay’.

The drum roll that opens the title track sets the pace for the record. Caedere plays death metal in the American tradition with a European sense for melody. The break in ‘Close to Decomposing’ is the only instance wherein the bass guitar is given a moment to shine. Truthfully, the great majority of the material on “Mass Emission” doesn’t allow for any creative bass licks, and as such it isn’t surprising that Herbert Cats dutifully ends up doubling the guitar as often as he does. ‘Rope to Die’ increases the Morbid Angel influence, and has some distinct bass plucking. It recycles in part, perhaps unintentionally, a familiar chord progression from the Gorefest track 'Second Face'. ‘Rotten to the Core’ is not an Overkill cover as the title would suggest. ‘Corpse For the Theft’ sounds radically different from the other tracks with its jagged riffing and bouncy rhythms. It sounds closer to Napalm Death’s universally reviled duo “Fear, Emptiness, Despair” and “Diatribes”. The only guitar solo of the album, provided by session musician Martijn Kok, makes an appearance on the Hypocrisy cover track ‘Pleasure Of Molestation’.

Caedere understands the importance of song structure, and each track has a recognizable beginning, middle, and end. Neither are they afraid to slow down, and push towards a fitting groove whenever the song calls for it. The album doesn’t carry the same macabre atmosphere as, say, Gorefest debut “Mindloss” or the incessant darkness of the third Sinister record “Hate”, but at least Caedere tries to do more than just basic aggression and speed. While none of the songs have any guitar solos to speak of there are plenty of recognizable moments in each. The fact that Niels Ottink was the sole guitarist explains the lack of any guitar acrobatics. Ottink’s rhythm playing is as precise and tight-knit as one has come to expect of the genre. Unlike their American peers Gorgasm, Caedere also don’t have a traditional metal undercurrent in their riffing – instead the adhere to the Dutch tradition of highly precise visceral intensity.

Only ‘Mass Emission’ and ‘Impaled’ diverge from the standard gore lyrical theme. The latter hints ever so slightly at the socio-political direction Caedere would explore on its subsequent albums. It goes without saying that the lyrics that diverge from the tired gore and grue subjects are the most interesting of the album. On its debut Caedere is content to stay within the tried and true conventions of the genre. It wouldn’t be until Caedere opted for socio-political lyrics that their character truly started to define itself. “Mass Emission” isn’t quite as adventurous yet, and quite conventional within the well-trodden parameters it set for itself. As such it is hardly a mandatory release in the genre, as the band sounds derivative of its more popular Dutch peers, especially the early work of Severe Torture.

Superficially Caedere does indeed sound like an early Severe Torture (“Feasting On Blood”) knockoff, but there are a few fundamental differences between both bands. Michiel Lankhorst’ vocals tend to lean more towards George Fisher territory than Dennis Schreurs’ bloodied gutturals. Sjoerd Modderkolk’s drumming is far more elaborate in terms of fills than Seth van de Loo’s early work with his band. Caedere is primarily a guitar-focused band, and on “Mass Emission” Herbert Cats’ superb sounding bass guitar doesn’t do much to warrant attention outside of its solitary bass break in ‘Close to Decomposing’.

Caedere differs drastically from its inspiration in terms of rhythms and melodies. “Mass Emission” seems to be primarily written around angular rhythms that very much recall “False”, the second album of Dutch institution Gorefest. The transitions and general riff construction are almost Polish in design and execution. As such the choice of cover track is somewhat of a headscratcher as on a release like this, and given the band’s stylistic inclinations, it wouldn’t be unreasonable to expect something from Morbid Angel, Demilich, Lost Soul, or “False” era Gorefest as a choice in cover track. “Mass Emission” is a solid record in its own right, but hardly the new standard for Dutch death metal. Caedere debuted far stronger than some of its contemporaries, but it wouldn’t be until the arrival of its third album that they truly started to carve out a sound that they could truly call their own.