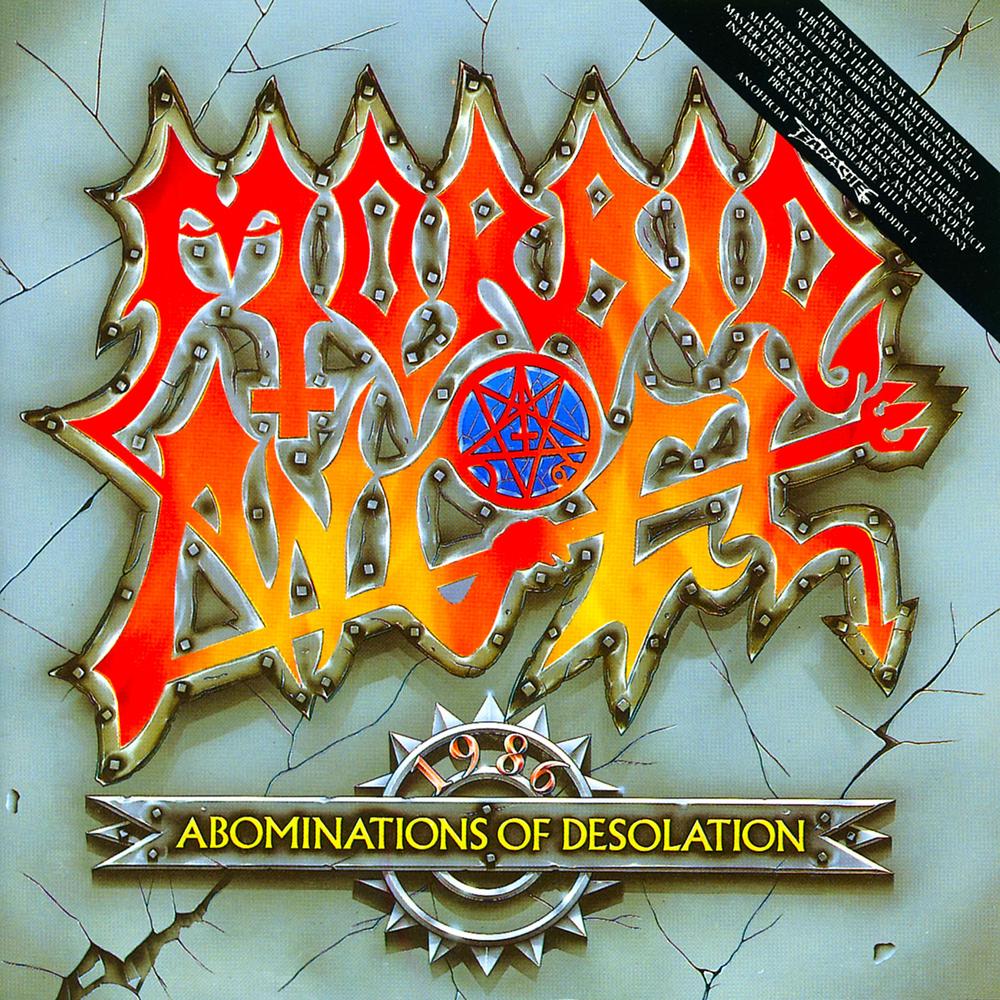 The roots of death metal institution Morbid Angel can be traced by to its four central figureheads: lead guitarist George Emmanuel III (Trey Azagthoth), who was born in Bellingham, Washington but lived in the Tampa, Florida region and Charlotte, North Carolina native David Alexander Stuppnig (David Vincent) who was set to produce the band’s 1986 debut album, but was later enrolled as its singer/bass guitarist, along with the Tampa, Florida duo of drummer/vocalist Mike Browning, and troubled lead guitarist Richard Brunelle. “Abominations Of Desolation” was meant to be the band’s proper debut for fledging British label imprint Earache Records, but interpersonal problems and an unflattering production job led to the project being shelved. The band went back to the drawing board as interpersonal problems led to its implosion. The band would debut in earnest in 1989 with “Altars Of Madness”, which saw the newly installed Vincent on vocals/bass guitar along with El Salvador born Pedro ‘Pete’ Sandoval behind the drum kit. This would become the band’s most enduring and recognized line-up.

The band is the creative vessel for George Emmanuel III, whose is popularly better known under his stage name Trey Azagthoth. The first part of his stage name referring to the name component “III” in his civilian name, while the second part refers to the fictional deity Azathoth from the Cthulhu Mythos and Dream Cycle stories by British pulp author H.P. Lovecraft. They form much of the basis for the band’s lyrics. The earliest incarnation of the band was called Ice, which mainly played covers of Angel Witch, Black Sabbath, Iron Maiden, Mercyful Fate and Slayer. The cover band became much heavier and transformed into Heretic. After finding out that the name was already in use by another band Azagthoth came up with the name Morbid Angel. Members came and went while the band experimented with sound and imagery, before eventually settling down with what worked. A series of studio - and live demo tapes were recorded and circulated which generated enough fan – and industry interest to fund a proper recording for the fledging unit. Things wouldn’t go as smooth as hoped from there…

After a good three years of continual line-up changes and finding its sound Tampa, Florida death metal pioneers Morbid Angel set to record its debut. On the back of two studio - and as much live demo tapes, the band holed up at Central Recording Studios in North Carolina with David Vincent and Bill Metoyer producing. These sessions were deemed unsatisfactory for the band and the label. Mainman Trey Azagthoth considered the product not heavy and fast enough, while the label was dissatisfied with the thin production. History would note that Azagthoth was having an affair with Browning’s girlfriend at the time. An altercation over this eventually led to Browning’s termination from the band, and the enrollment of its most identifiable frontman not much later. Various sources also point to Vincent as being the instigator behind Browning’s and Ortega’s dismissal from the band, but this has since been buried in the official history. As the constellation fell apart in the aftermath of these events, it was the ideal situation to have these sessions relegated to the band’s private vaults. It wasn’t until in the early 90s that a multitude of bootlegs were starting to circulate, that both band and label noticed a keen interest in the band’s little known early days. As such it was decided to give these recordings a second lease on life by way of a label-sanctioned re-release. This gave the band more time to prepare its second album, and stirred interest in the band’s history.

That these sessions were financed by the band’s future frontman is fairly interesting in itself, just as much as that they choose to work at a studio in North Carolina instead of genre hotbed Florida. The whole endeavor was coordinated by North Carolina native David Alexander Stuppnig (popularly known as David Vincent) with his own record label Goreque Productions. They had an interest in death metal upstarts Massacre, but choose to offer Morbid Angel a contract earlier. Vincent had prior to joining Morbid Angel fronted his own band called Buried In Cemetery giving him the advantage of experience. The album itself is mostly a gathering of signature cuts off the band’s studio demos. All four songs from the 1986 “Scream Forth Blasphemies” make an appearance, along with the signature tracks off the band’s various live demo tapes. All of these cuts (with exception of ‘Demon Seed’) would be re-recorded on post-“Altars Of Madness” albums. Notable is that about every track of the band’s demo phase would appear on “Altars Of Madness” along with a few select tracks written specifically for the session. In hindsight this burning through archive material probably led to the dearth of actual new song material on “Blessed Are the Sick” which peters out in its second half despite being an exceptionally strong and atmospheric piece of classic death metal otherwise.

‘The Invocation’ is a ritualistic intro like the band would never attempt again. It seems to have made an impression on a young Karl Sanders, who would replicate that formula in a similar fashion about a decade later with his own band Nile. The track is ominous and incredibly brooding, and it is a shame that the band never explored this option fully. ‘Chapel Of Ghouls’ is nearly identical to its later incarnation, except that it is played much slower. The drumming of Mike Browning (who also provided vocals for this session) is more thrash-oriented and not nearly as fill-heavy as the later and more popular Pedro Sandoval rendition. Browning’s vocals are of a higher pitch and more caustic than those of his successor David Vincent. In fact Browning has something of a young Tom Araya circa “Show No Mercy” slant with his percussive delivery. Browning’s vocal style would later be imitated by Dutch thrash metal unit Dead Head to a considerable degree. It is not unexpected that Morbid Angel here sound more like a very technical, midtempo and overtly occult version of early Metallica, Death or Slayer. Especially a cut like ‘Azagthoth’ (later re-recorded as ‘The Ancient Ones’ on the second album “Blessed Are the Sick”) makes this readily apparent to the observant among us.

The prominence of John Ortega’s oozing bass guitar, and how integral it is in many of these songs, is something that would be toned down with the arrival of David Vincent. ‘The Gate’ is another ritualistic interlude much like ‘The Invocation’ as it serves no other function than being a moodsetting piece for ‘Lord Of All Fevers & Plague’. That all tracks are played at a slower pace isn’t to their detriment, as nuances can be discerned better. Azagthoth’s myriad leads shine brighter because of the slower overall tempo. There’s also more of a crunch to these cuts than the later recorded Vincent fronted versions. ‘Hellspawn’ is as vitriolic here as would later be on “Formulas Fatal to the Flesh”. That ‘Demon Seed’ was never re-recorded isn’t much of a surprise as it a two-minute thrasher barely worth staying awake for. It is entirely possible that the band disassembled it and repurposed some of its parts for later songs. It sounds like a throwaway track at best, and its presence doesn’t add much to the session at all. Only ‘Welcome to Hell’ would sound better in its later incarnation as ‘Evil Spells’ where the increased speed actually works to its advantage. The closing section remains as strong as ever both versions.

Overall “Abominations Of Desolation” is a fascinating look into the early works of one of North America’s most revered death metal bands. That Earache Records saw this as an easy paycheck on behalf of its new signee is rather obvious with this demo compilation. The booklet contains the original demo art, but there are no lyrics printed and no liner notes provided. They didn’t even bother to reproduce a band picture for this release. Not to mention that even any and all production credits were omitted. History would note that Earache Records bought out the copyrights from Vincent’s label in order to combat widespread bootlegging of what was arguably the most sought after demo tape at the time. Does any of that excuse the cheapness and cutting corners on display with this re-issue? No, of course it doesn’t. The only thing this demo compilation does right is having stimulating glass artwork by Mark Craven. What exactly is a fan supposed to gain by buying this shoddy official label-sanctioned release of said demo tape? All historical information is conveniently left out, there’s no context as to where these recordings fit into the band’s then-nascent career, and none of the material was re-mastered or cleaned up for mass consumption. Then there’s the fact that Earache was complicit in questionable business practices as the deal with Vincent left both Browning and Ortega bereft of any royalties for the songs they had help write for the session. To wit, this very thing would come to define the Vincent-Azagthoth axis later in the band’s career.

Equally as interesting is how dependent the band would become on this material later in its career. From 1989 to 1991 Morbid Angel, or Azagthoth rather, had compiled barely enough original material to fill one single album – as both “Altars Of Madness” and “Blessed Are the Sick” comprise nearly half of archive material each! Thankfully the band, at least in its initial manifestation with Vincent on vocals, would redeem itself by writing superb original material to complement the copious amount of recycled archive material. Although the band is rightly revered for many good reasons its career path is shaky at best. Even this early Azagthoth had no problem re-writing history in his favor, despite evidence and facts being out in the open for anybody that cares enough to look. The band aren’t nearly as infallible and genius as legend made them out to be, as the post-Vincent material never surpassed the creative apex of the band’s early days. This demo compilation is a curiosity worth hearing for historical reasons, although it might ruin a person’s picture perfect idea of how innovative Morbid Angel supposedly is/was.