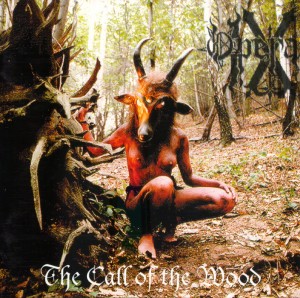 “The Call Of the Wood” is the first of three Opera IX records with Cadaveria in the vocal slot. Of these three it is the least symphonic of the three, and most conventionally doom/death metal oriented in construction and pacing. Combining sweltering Mediterreanean mysticism with esoterica, occultism, and a poignant horror atmosphere - it is rightly considered a milestone in Italian underground metal. Arriving at the advent of the European dark metal boom of the mid-90s, it helped usher in a new era for extreme metal. Often overlooked in the band’s discography it sets the stage for the album’s two critically acclaimed successors.

Ossian d’Ambrosio formed Opera IX in Piedmont, Italy in 1988 as a solo project. The project wouldn’t take off until the 90s when the first real line-up was established. Opera IX released three demos, with only the last two getting any notable traction. On the 1993 “The Triumph Of the Dead” EP (which had a video companion) the band’s music started coming together in a more unified form. Together with Hellenic horde Astarte, Acrostichon from Holland, and formative American practitioners Dérketa and Mythic – Opera IX was one of the earlier underground metal bands to feature a woman in the vocal slot. Interestingly frontwoman Raffaela Rivarolo was never played up as a convenient marketing ploy. Instead she was the alluring face and voice of a self-professed coven. Unlike any other they were able to capture that intangible 1970s Italian horror cinema atmosphere. 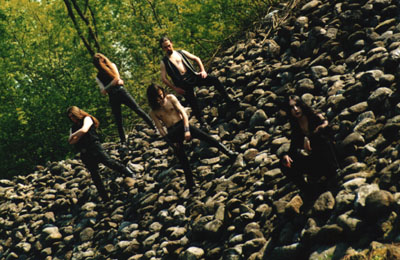 On “The Call Of the Wood” Opera IX was a quintet, with founding member Ossian d’Ambrosio (lead guitar) leading the charge, along with key collaborators Raffaela Rivarolo (vocals), Alberto Gaggiotti (drums), and Vlad (bass guitar). Since the band was not able to secure a stable keyboardist at the time the role was filled by a session musician with the stage name Silent Bard. The position wouldn’t be filled until the arrival of Lunaris on the successor to this album. All music for the album was written in between 1991 and 1994. Of the early Opera IX the debut is the most ambitious and technical. Hampered by a somewhat thin production the record’s atmosphere was often imitated but never surpassed. Mixing the theatricality of Death SS with the gloom of doom metal and the esoterica of pagan metal - Opera IX offers the best of all three worlds in a tantalizing meditation on superstition, the arcane and local folklore.

Creating an aura of mystery around themselves the references to occultism, spirituality and esoterica start with the band name. In Italian the word opera means “work”, both in the sense of the labour done, and its subsequent results. The IX (9) in numerology stands, among other things, for spiritual enlightenment, spiritual awakening, mysticism and divine wisdom. It symbolizes the principle of universal philosophy and consciousness. While often categorized as black metal, Opera IX is much closer related to pagan – and doom/death metal. “The Call Of the Wood” is different from the band’s later output as it is much more death metal oriented in terms of construction. Not only is the riffing denser and more churning compared to later albums, the heaviness is aided by the thick bass guitar tone that fills up the low end. It far less overly symphonic and the gothic undertones aren’t quite as developed as they would be on later albums.

“The Call Of the Wood” deals with a variety of subjects, and isn’t quite as thematically singular with its focus. ‘Alone in the Dark’ is about Dario Argento’s Three Mothers triptych of horror movies, specifically “Inferno”. The classical piano parts manage to capture the desolation of Argento’s celluloid giallo masterpiece. ‘Esteban’s Promise’ chronicles the works of Esteban del Agua y Tierra, a Koldunic Sorcerer of the Americas. ‘The Call Of the Wood’ is a celebration of Wicca and the Goddess movement in neopaganism. The track references various Goddesses of fertility from Akkadia, Sumeria and Greece. ‘Al Azif’ is about the fictional Necronomicon of revered British pulp author H.P. Lovecraft, and its chronicle of the Mad Arab, Abdul Alhazred. ‘Sepulcro’ is about necromancy, and effectively captures the bleakness and gloominess of its titular place.

‘Alone In the Dark’ is a gargantuan +18 minute composition showcasing all the different aspects of Opera IX, be they death metal, doom, symfo and it captures the oppressive darkness within the Italian catacombs. The track is helped tremendously by the almost tribal percussion, and extended soloing an a mid-song break. ‘Esteban’s Promise’ has Mediterreanean horror movie styled keyboards, organs and throbbing bass guitar solo. Opera IX’ strongest material is usually its slowest. The track is exemplary of the band’s musical versatility within a limited creative perimeter. ‘Al Azif’ starts off with more tribal percussion, and is one of the faster cuts otherwise. ‘Sepulcro’ is the most doom-oriented track of the record with an extended bass guitar and keyboard intro. In many ways Opera IX was the South European equivalent to Polish band Christ Agony. Both bands are heavily dependent on atmosphere, of the two Opera IX remains the superior as its attack is far more versatile musically and driven by a stronger artistic concept.

Rivarolo changes from rasping, growling to emotive clean singing and narration often within the same song. She’s similar to Melissa Gray from British metal band Adorior in her vocal acrobacy. Technically unpolished and on the rawer end of the spectrum Rivarolo puts a lot of soul and emotion in her serpentine delivery. She sings in a far lower register voice here in comparison to the later albums. The clean – and spoken passages aren’t quite as developed as they would become on subsequent albums yet Rivarolo effortlessly switches techniques multiple times within each song. The keyboards are supplemental, and often use celebratory, and victorious melodies. Driven by acoustics, ethnic music and prioritizing atmosphere over technical finesse Opera IX valiantly attempts to sound as an occult pagan ritual captured on record, or as the soundtrack to a witches’ coven. During its most accomplished material they are the metal equivalent of a 1970/80s Goblin, Fabio Frizzi, or Walter Rizzati horror soundtrack. This rings especially true for the keyboard work in the eerie ‘Sepulcro’.

“The Call Of the Wood” was recorded over a two month period at PKM Studio, Vercelli with Paolo Baltaro and Marco Pesenti engineering. Functional in the basic sense it is rather thin sounding and can’t quite support all the facets of the band’s sound. Especially the guitars and drums end up sounding emasculated in the process. The leads are generally crunchier than the rhythms, the bass guitar often provides more interesting riffs than the rhythm guitar. The keyboards are well produced, even though some passages are on the hokey side. Oddly enough the band shot promo videos for both its demos, but not for this album. Its next music video wouldn’t surface until the next album was released. Combining sweltering Mediterreanean mysticism with esoterica, occultism, and a poignant horror atmosphere “The Call Of the Wood” is considered a milestone in Italian underground metal. No band before or since has quite been able to conjure up the same atmosphere, although fellow Italian witch coven Riti Occulti at least attempts to recreate what Opera IX had masterfully crafted almost two decades before.