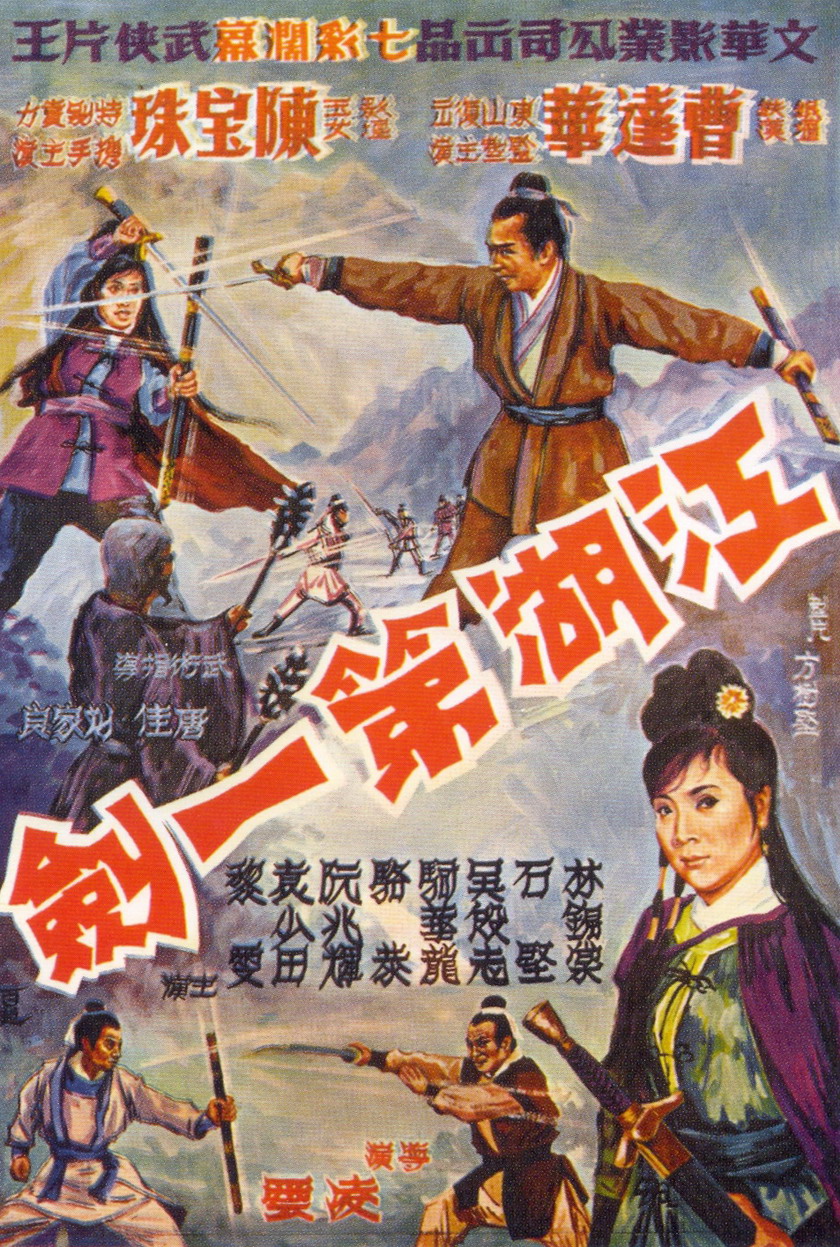 Plot: daughter avenges the death and dishonor of her bankrupted father

Supreme Sword was a Cantonese period costume wuxia produced at a time when Cantonese cinema was on the way out. The Japanese wuxia of the day were more impressive but they had resources, financial and otherwise, that Supreme Sword did not have access to. Starring leading lady of the day Connie Chan Po-Chu and martial arts pillar Walter Tso Tat-Wah Supreme Sword is a fairly ordinary example of the form and about the only thing that makes it stand out is that it’s fairly bloody for its time. The revenge plot is the oldest in the book but Supreme Sword puts in at least one surprise to make it worthwhile. Supreme Sword is a vehicle for Connie Chan Po-Chu, of the Seven Princesses, and if it weren’t for her presence the production certainly would’ve been rendered a footnote in martial arts history.

When her father (Ling Mung) is bankrupted and dishonored by a counterfeiting ring employing loanshark Mr. Ma (Ko Lo-Chuen) and headed by Gold Fist (Lok Gung) he kills himself to save his relatives from further disgrace. His daughter Wang Tsui Ying (Connie Chan Po-Chu) vows revenge. The counterfeiting ring is part of a much larger criminal operation led by The Four Tigers (See Kin, Ng Yan-Chi, Sze-Ma Wah-Lung, and Wah Wan-Fung). In her quest for revenge Wang Tsui Ying makes her acquaintance with master swordsman Fong Tien-Biu (Yuen Siu-Fai) and his student Cheng Wen Chieh (Lam Kam-Tong). The three run into a dirt-poor drifter/beggar by the name of Fang Tien Hung (Walter Tso Tat-Wah) who themselves are in the process of freeing the captive father of his client Liu (Gam Lui). Loyalties are tested when it is revealed that Liu’s father Cheng Chung is none other than Gold Fist.

The star of Supreme Sword is Connie Chan Po-Chu, who was one of the so-called 'Seven Princesses' of Cantonese cinema all through the fifties and sixties together with Josephine Siao. Chan was the daughter of opera stars Chan Fei Nung and Kung Fan Hung and was trained in Northern and Southern martial arts. Starting acting at an early age Chan appeared in every genre under the sun including, but not limited to, Chinese opera, wuxia, fantasy and even the occassional romance. Chan was a protégé of famous Cantonese opera star Yam Kim-Fai, famous for frequently playing male roles. Connie Chan Po-Chu and Josephine Siao had starred together with the remaining five other Cantonese starlets Petrina Fung Bo-Bo, her older sister Alice Fung So-Po, Wong Oi-Ming, Nancy Sit Ka-Yin, and Sum Chi-Wah in the two-part monochrome epic Seven Princesses (1967), from whence the collective derived its pet name. Connie Chan and Josephine Siao had a great and devoted following with Chan exceeding Siao in sheer volume, some 230 titles, even though her career was considerably shorter. Despite the friendly rivalry Chan and Siao would often star together in various productions. 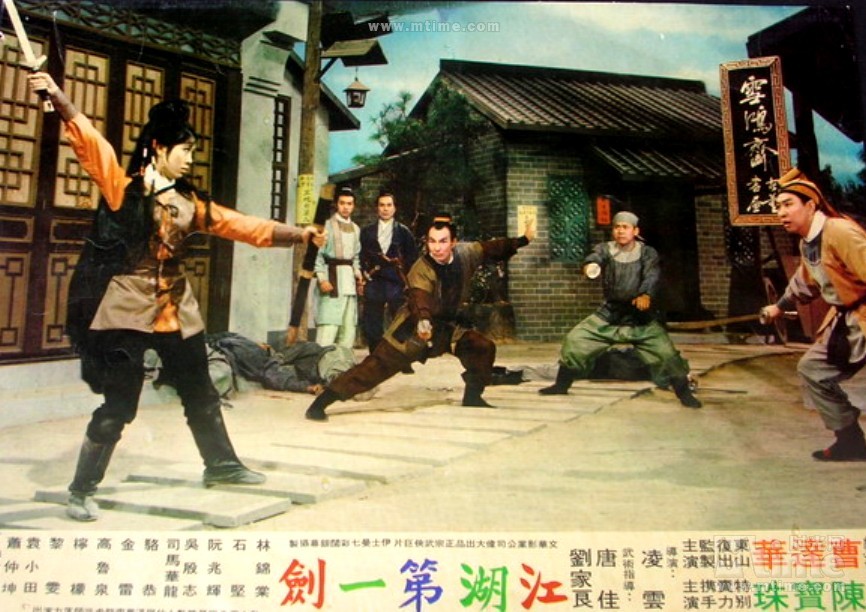 A bitter rivalry existed between the genre’s two prime studios Shaw Brothers from Hong Kong, China and Motion Picture and General Investments Limited (MP&GI, later and better known as Cathay) from the Republic of Singapore. As Cathay ceased operations in 1970 Cantonese cinema all but collapsed as Mandarin productions became de facto standard at the box office. The ensemble comedy The House of 72 Tenants (1973) was the only Cantonese movie made that year and a rousing success. Golden Harvest, the Hong Kong company formed by exiled Shaw Brothers executives Raymond Chow and Leonard Ho, was in no small part responsible for keeping Cantonese cinema alive. The decline of Cantonese productions forced Chan into early retirement. Connie decided to move to America to further her education but she was encouraged by director Chor Yuen - with whom she had worked frequently in the sixties - to join Shaw Brothers studio and star in his production The Lizard (1972). Following the release of The Lizard in 1972 Connie Chan retired from the entertainment industry completely. 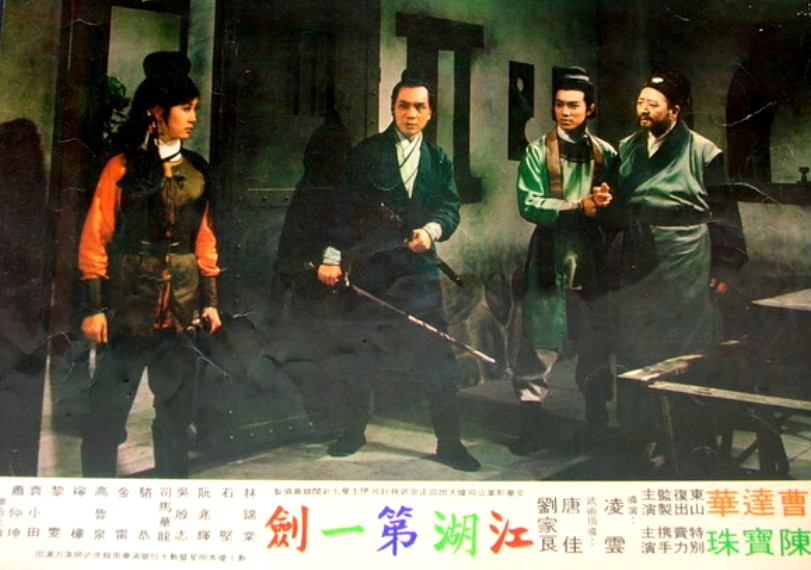 Chan's place was taken by a bright talent called Angela Mao Ying. Mao Ying would continue the pioneering work and pave the way for Michelle Khan (later Yeoh) in the 1980s, who herself was replaced by Cynthia Khan, Moon Lee and Yukari Oshima during the eighties and nineties. In 1999 Chan returned in the record-breaking stage play Sentimental Journey, a story based upon the life of her mentor Yam Kim-Fai, that was a critical success and ran for an impressive 100 performances. In 2003 Chan staged a series of high-profile concerts of beloved films songs and Cantonese opera classics. After the trek had ended Chan appeared in the play Red Boat that ran for 64 performances. Two years later, in 2005, Sentimental Journey was brought back for a six-week revival. Finally, in 2007, Connie was honoured with a Lifetime Achievement Award at the Hong Kong Drama Awards. 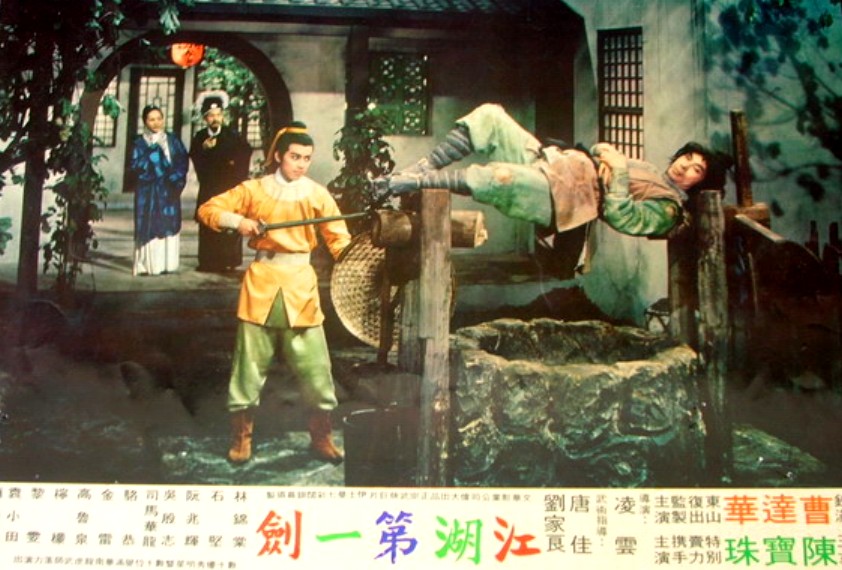 Supreme Sword was produced by Walter Tso Tat-Wah for Wenhua Film Company. Tso was a star in his own right. Tso had a career spanning seven decades and got his start in the industry in the mid-1930s when he worked for Grandview Film Company Limited as an assistant director to Chiu Shu-San, Moon Kwan Man-Ching and Tang Xiao-Dan. From there he worked his way up the ladder to production manager in 1949, all while staying active as an actor through out. In 1946 Walter Tso Tat-Wah and his sister Tso Yee-man, who The New York Times famously called the “Mary Pickford of China” at the time, were the stars of Yau Kiu Films Company, the company co-founded by his brother in law and Toishan native You-Chuck Moy. Yau Kiu Films Company was a state-of-the-art 48 thousand square feet studio compound in Kowloon City near the Hau Wong Temple where Sai Kwong and National studios were also housed, making it the mini-Hollywood of Hong Kong. Tragedy struck on November 20, 1948 when Tso Yee-man, the creative force behind the studio, suddenly passed away at the young age of 30 due to complications arising from pneumonia. In an interesting strategic alliance Moy married Susan Shaw, the only daughter of Shaw & Sons Studios mogul Runde Shaw, in March 1949, mere months after the passing of his wife Tso Yee-man. 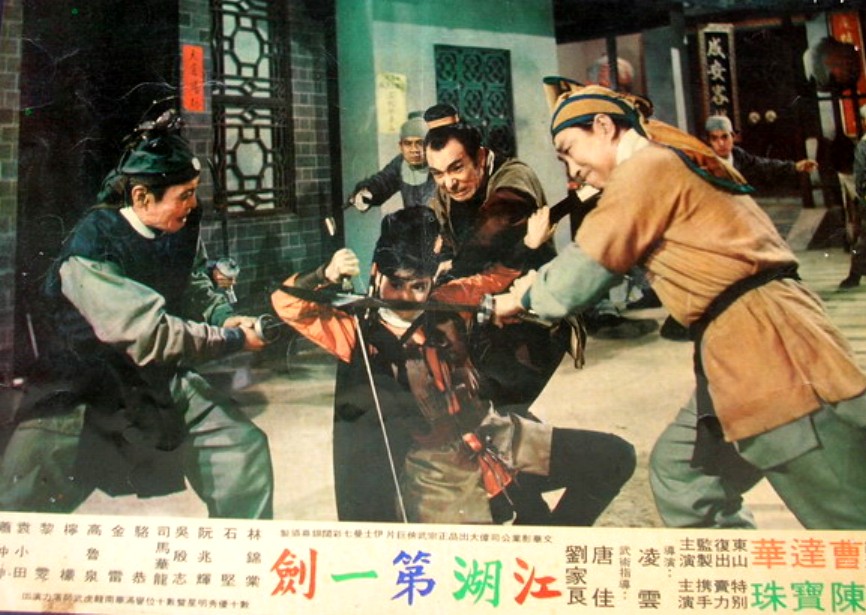 As one of the major movie studios in Hong Kong in the late 1940s and early 1950s Yau Kiu produced a modest 16 features and filmed 13 others. In 1952 the Mandarin section of Yau Kiu studio burnt down when a short circuit took place in one of the movie sets. From that point forward production was halted at Yau Kiu but other production companies still used the facilities. Walter Tso Tat-Wah not only was a shareholder in Yau Kiu studio but also owned the Palace Theatre (皇宮戲院) in Pak Ho Street in Sham Shui Po which opened in 1953. Tso had to sell his Palace Theatre as well as a number of other properties to pay off his gambling debts, one of his known vices. The most successful production for Yau Kiu was The Seven Swords and the Thirteen Heroes (1967). Yau Kiu was absorbed by Great Wall Movie Enterprise (now part of Sil-Metropole Organization), the leader of Mandarin films in the 1950s and 1960s. In 2001 the properties underwent re-development and it has since become the home to HKICC Lee Shau Kee School of Creativity and the Stone House Family Gardens. Yau Kiu was overshadowed by Shaw Brothers and Golden Harvest from 1970 onward. Walter Tso Tat-Wah was a veteran from in excess of 700 films and was honored with the Lifetime Achievement Award of the Hong Kong Film Critics Association in 2001 and was given the Professional Achievement Award at the Hong Kong Film Awards in 2003. 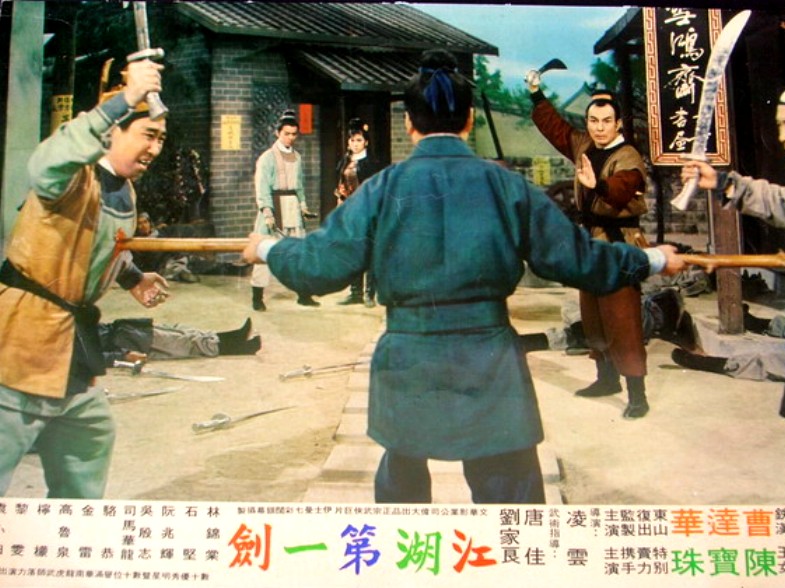 Walter Tso Tat-Wah was one of the biggest stars at Wenhua Film Company, famous for his roles of Leung Foon, the head disciple of Wong Fei Hung in the four-part Wong Fei-Hung series (1956-1958) that started with Wong Fei-Hung at a Boxing Match (1956) and Wong Fei-Hung's Fight in He'nan (1957) and concluded with How Wong Fei-Hung and Wife Eradicated the Three Rascals (1958) and How Wong Fei-Hung Stormed Phoenix Hill (1958) as well as for his role of Lung Kim Fei from the Buddha’s Palm (1964) series. The directorial duties were given to Ling Yun, a material arts veteran who had worked with Tso earlier on the Buddha’s Palm (1964) series and with Chan on the The Sword of the Palace (1963) trilogy, the two Young and Furious (1966) films as well as the Jade in the Red Dust (1966) trilogy. The screenplay was written by Sze-To On, a prolific writer in Cantonese and Mandarin cinema with credits in a variety of genres dating as far as back as the mid-fifties. Although he was a specialist in the martial arts and wuxia genres Sze-To On also wrote the screenplay to Erotic Ghost Story II (1991) an adult feature that capitalized on the success of Tsui Hark’s A Chinese Ghost Story (1987) franchise, which was on to its third episode by that point. Assistant direction on Supreme Sword was done by Chan’s long-time paramour Law Kei. 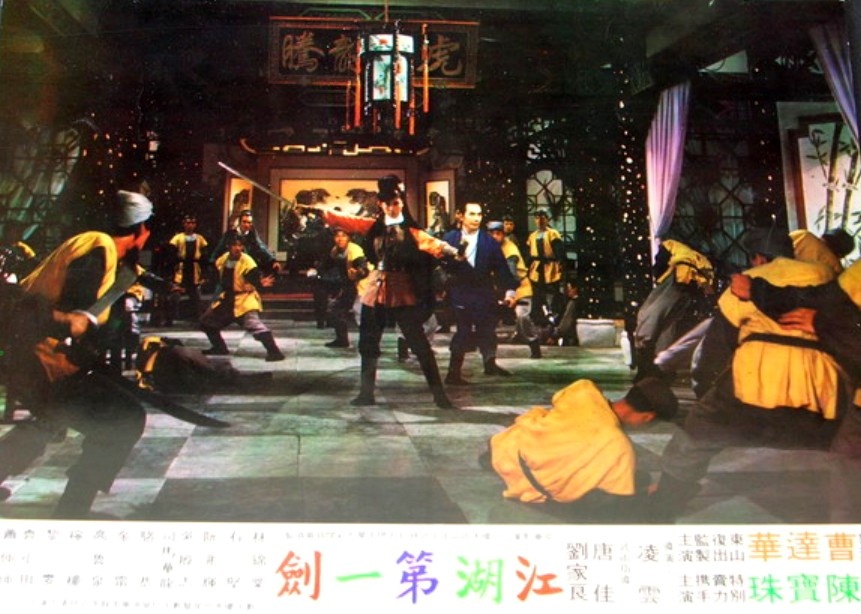 The fight choreography isn’t quite as acrobatic as would become the norm thanks to Shaw Brothers’ “second wave” wuxia from the second half of the sixties onward. The sword-wielding avenger is a classic figure of Asian cinema and Connie Chan Po-Chu’s portrayal of the vengeful Wang Tsui Ying might not surpass Lady Snowblood (1973) in terms of on-screen carnage and bloodshed, although it doesn’t shy away from severing extremities and spatters of blood, both are equal as far as intensity is concerned. Supreme Sword is one of the transitional titles between the earlier, more rustic wuxia and the more acrobatic variety that would come to dominate the seventies. While the two Lady Snowblood (1973) movies with Meiko Kaji are retroactively more remembered (not only because they were far more bloodier, but also because they were remade in 2003-2004 by a certain American director as the two-part Kill Bill feature) Supreme Sword is not any less impressive. Especially considering that it came from a considerably smaller studio. If there’s one title to start exploring the massive repertoire of Connie Chan Po-Chu Supreme Sword is an excellent startingpoint. Although truthfully the two-part Seven Princesses (1967) epic is where any such journey should really begin.