Plot: various factions wage war over the Twin Swords of Earth and Sky

After his New Wave period – encompassing the three features The Butterfly Murders (1979), We’re Going to Eat You (1980), and Dangerous Encounter of the First Kind (1980) – director/producer Tsui Hark started working for Cinema City Company and Golden Harvest, the company founded by Shaw Brothers exile Raymond Chow. Zu: The Warriors from the Magic Mountain (1983) - produced by Paragon Films for Golden Harvest - revolutioned the way special effects were used in the fantasy wuxia genre and established Tsui Hark as both a visionary and innovator. In fact the sheer number and complexity of the effects were unprecedented in Hong Kong cinema at the time. Derived from stories of mythology and antiquity and with an all-star cast of established and new talent Zu: The Warriors from the Magic Mountain was nominated 5 times at the 3rd Hong Kong Film Awards (Best Action Choreography - Corey Yuen, Best Actress - Brigitte Lin, Best Art Direction - William Chang, Best Film Editing - Peter Cheung and Best Picture) and set Tsui Hark on course in becoming ‘the Steven Spielberg of Asia’.

Zu: The Warriors from the Magic Mountain is probably the single most important movie in the early Tsui Hark canon. It was the transitional title in his evolution from low-budget (and largely commercially unsuccesfull) cinematographer to being the master of big-budget fantasy – and period costume wuxia. For the production of Zu: The Warriors from the Magic Mountain Hark founded Film Workshop and Cinefex and brought in Western special effects artisans to help him create 'the ultimate Chinese mythological spectacular'. Zu: The Warriors from the Magic Mountain was adapted from Lee Sau-Man’s 64 volume novel, “The Legend of the Zu Mountain Warriors,” and manages to squeeze 50 volumes into a nearly two-hour epic. Among the cast are Yuen Biao, Sammo Hung Kam-Bo, Norman Chu Siu-Keung, Corey Yuen Kwai as well as Brigitte Lin, Moon Lee, and Judy Ongg. Widely regarded as the Hong Kong equivalent to George Lucas’ Star Wars (1977) it made a staggering 15 million HK dollars at the box office and set the stage for Tsui Hark to helm even more ambitious projects. Art director William Chang would later become a key collaborator with director Wong Kar-Wai. 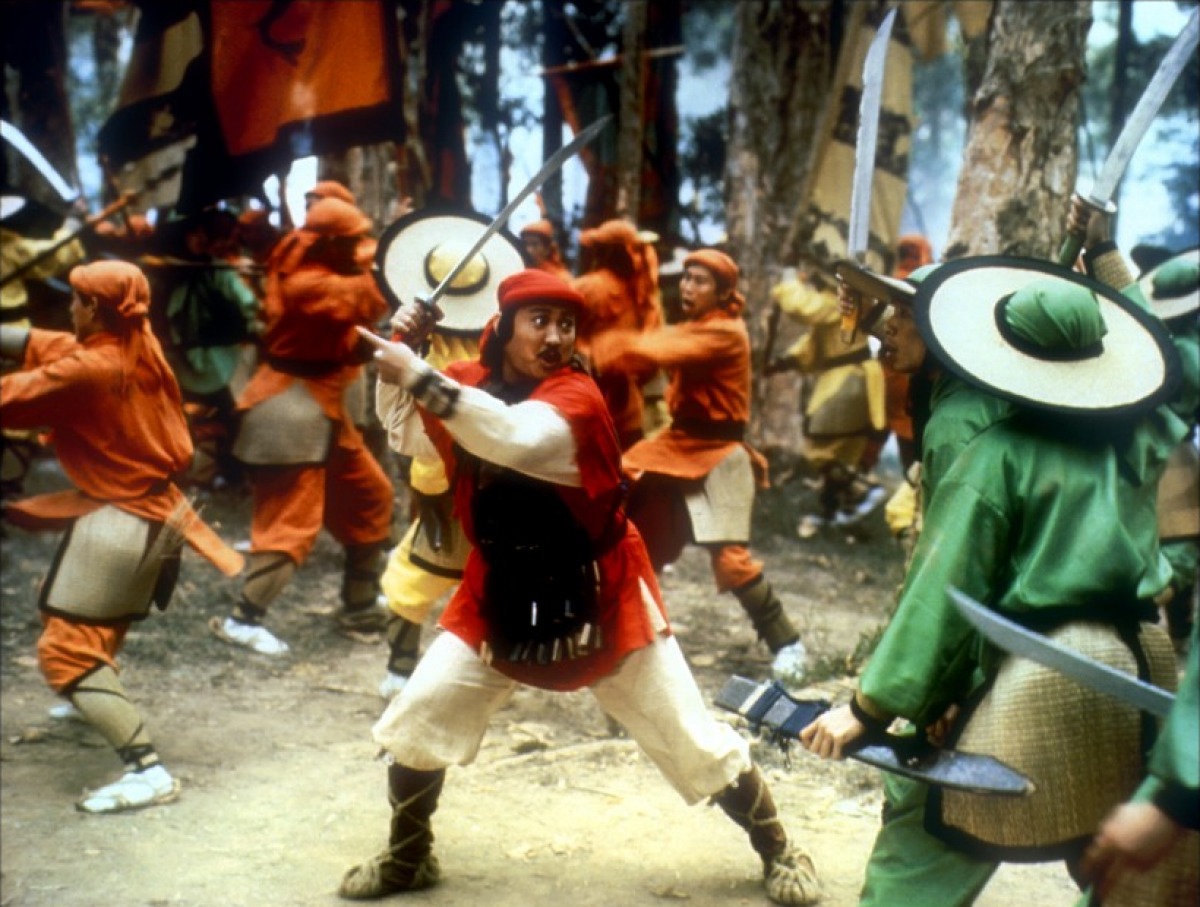 Di Ming Qi (Yuen Biao) is a Western Army scout during the Tang Dynasty. He is tired of the near-constant state of war the country is in. Chased from the battlefield for simultaneously obeying and disobeying direct orders from two different generals;. he runs into an equally disillusioned Eastern Army soldier (Sammo Hung Kam-Bo) and the two agree on the absurdity of the conflict and the futility of the concept of war. The two bond over the fact that they are indeed neighbors and pretend to be killed in order to escape the chaos and bloodshed. After making their escape from an invading faction Di Ming Qi falls into a crevasse and a thunderstorm forces him to retreat into a nearby cave to seek shelter and relative safety. The cave is part of the Zu mountainrange, in the Bazu region of Western China, a place of great strategic importance in times of war – and home to fabled antediluvian legends and primordial arcane mysteries. Without realizing it Di Ming Qi will soon find himself engaging in an epic battle for survival between the dominating forces of the terrestrial and the ethereal. 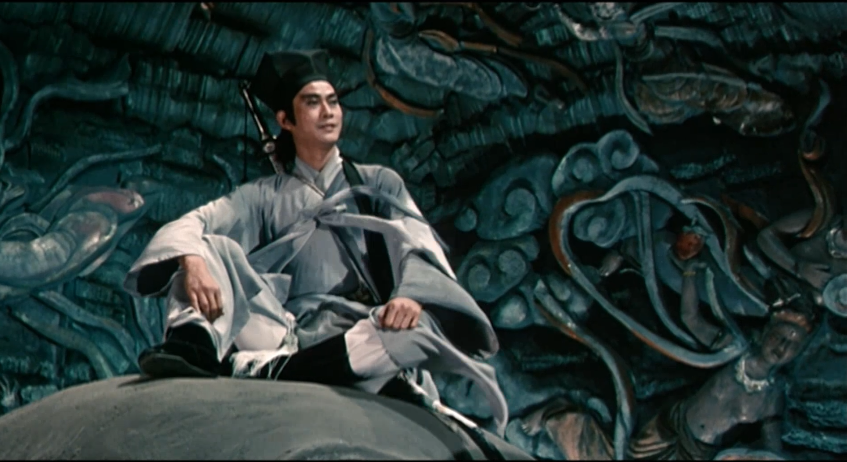 In the bowels of Zu, the Magic Mountain Di Ming Qi is beset by supernatural horrors until Ding Yin (Adam Cheng) comes to his rescue. Di Ming Qi vows to become Ding Yin’s pupil in order to pay his lifedebt. The two are attacked by the Blood Devil, a supreme evil manifesting itself as animated red cloths, that has been held at bay for the past century by powerful but aging monk Chang Mei, or Long Brows (Sammo Hung Kam-Bo). The Blood Devil feeds itself with the skulls of young boys and despite Chang Mei’s valiant attempts to contain it, he will only be able to hold off the Blood Devil for 49 more days before he too becomes corrupted by the demon’s malignant powers. They find allies in Xiao Ru (Damien Lau) and Yi Zhen (Mang Hoi), or Wisdom and Innocence as international translations call them, a master and pupil from Kunlun. Chang Mei instructs them to find the Celestial Swords to defeat the ancient hatred. They must seek Lei Yikkei, the current keeper of the Twin Swords of Earth and Sky, who according to legend meditated and practiced in a Tin-Ngoi-Tin cave. The four first face off against the Evil Cult, led by the Devil Disciple (Hark-On Fung), in the Sek-Lam temple. In the skirmish Xiao Ru is injured and the cure can only be found at Yiu-Chi-Sin fortress. 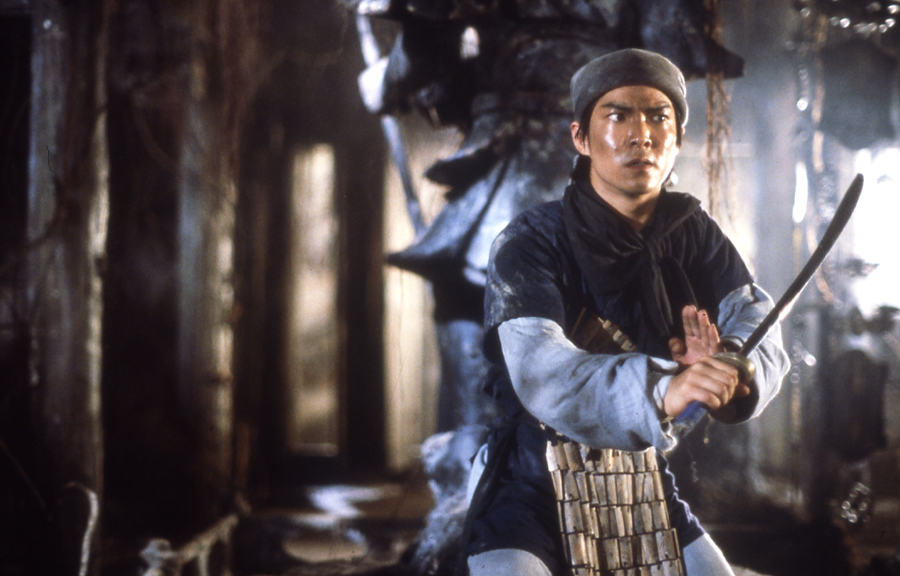 Before arriving at the fortification the group witnesses The Red Witch, a sorceress of unexplained origin. At the Celestial Fortress the fellowship is beset by a legion of female warriors under command of Mu Sang (Lee Choi-Fong, as Moon Lee). Lady Li I-Chi (Ha Kwong-Li) explains that they don’t take kind to the unannounced intrusion. Their pleads for help fall on deaf ears and Lady Li I-Chi exposits that the “immortal ice flame of the fort” signals the arrival of the Countess Of Jade Pond (Brigitte Lin). Ding Yin uses his magic to artificially keep the flame burning forcing the Countess to grant them a visitation. To their dismay the Countess is the same red-clad sorceress they met earlier, and the group understandably attacks her. Di Ming Qi is injured during the altercation and is healed by Ding Yin. The Countess Of Jade Pond reluctantly agrees to heal the wounded Xiao Ru. The process takes its toll on the Countess leading her to faint. Ding Yin hurries to her rescue, embarassing her while at it, but the two come to like each other. Ding Yin hands Di Ming Qi a sword but the latter soon finds out that the sword has been poisoned by the Red Witch. Di Ming Qi realizes that he’s bound to fall victim to the same possession Xiao Ru was just cured of. The Countess wants to help, but is too exhausted from the previous healing session. Ding Yin asks that she kill him, a request that draws her ire and soon the two factions are engaged in a battle that eventually leaves the Celestial Fortress encased in ice. Di Ming Qi, Yi Zhen, and head guard Mu Sang somehow are able to escape the frozen onslaught. 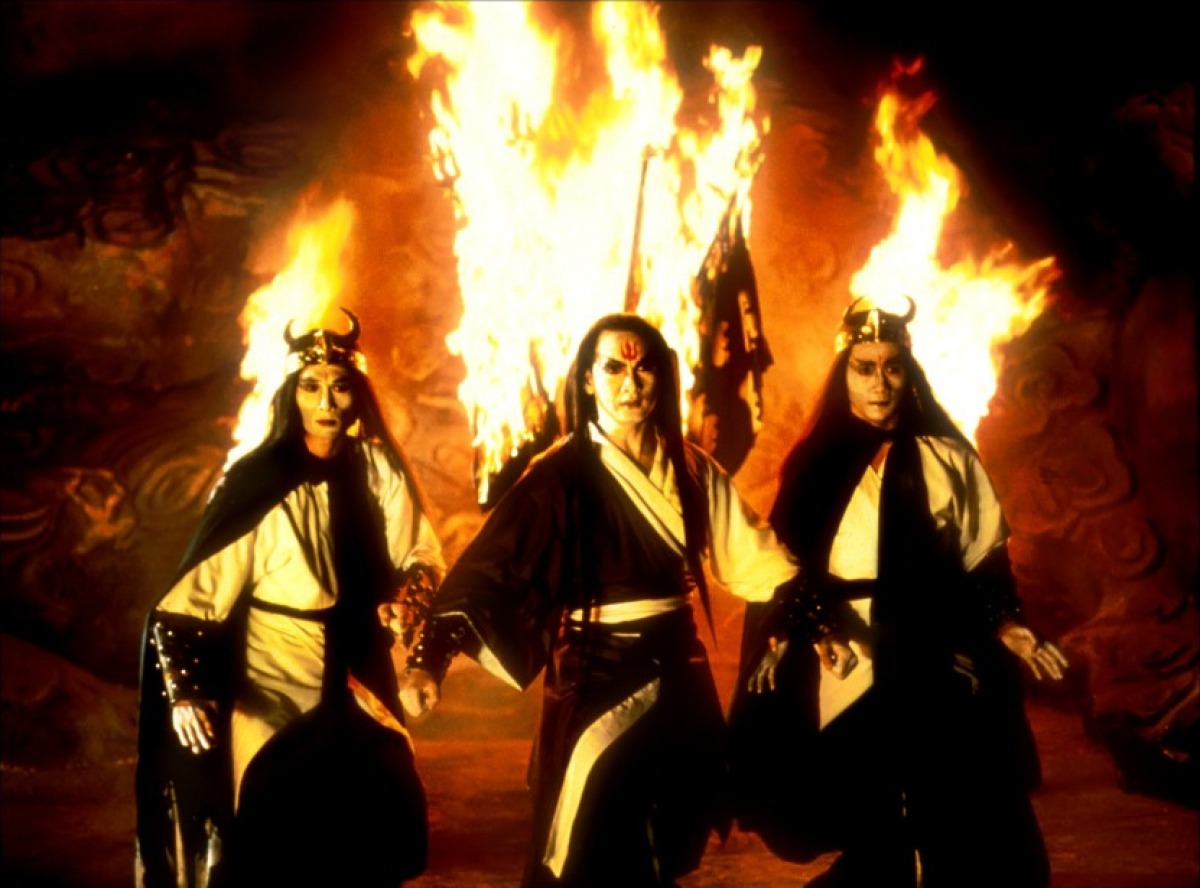 The three continue their journey and eventually run into Tin Dou (Norman Chu Siu-Keung), who international versions refer to as Heaven’s Blade, who has kept the unholy forces of evil at bay for over a century somewhere at the border between heaven and hell. Ding Yin, now completely overtaken by evil, appears but Di Ming Qi courageously battles him with one of his own swords until they are sucked into the lungs of hell. Tin Dou sacrifices himself to allow the duo to escape. Once they have regained their composure they notice two swords – green and purple – overhead and soon they find Lei Yikkei (Judy Ongg, as Weng Qian-Yu) on a nearby peak. Lei Yikkei informs them that time is running out and that they have to be united, in spirit and heart, in order to wield the Twin Swords of Earth and Sky. Lei Yikkei joins the unification existing within the two combined warriors. While all of this is transpiring the Countess Of Jade Pond meets the quarrelling Western and Eastern armies, but their common greater enemy leads them to working together. Once again the demonic Ding Yin appears, but with the last of her sorcery the Countess is able to defeat the monk. Just as the Blood Devil is to be unleashed, the Dual Swords are combined and the ancient hatred is defeated. Now having acquired near god-like powers the youths dedicate themselves to uniting the people of earth.

Taiwanese actress Brigitte Lin came from the Golden Harvest stable and was an experienced veteran from over 100 movies. Lin was a staple in Taiwanese dramas and romance, but towards the late 1970s veered towards historical drama, war, and action productions, before becoming a pillar in period costume wuxia in the eighties and nineties. Lin was a frequent collaborator with director Chu Yin-Ping in her earlier days and Zu: The Warriors from the Magic Mountain marked her reinvention under Tsui Hark. Lin scored her first role of note with the modest The Ghost Of the Mirror (1974), a loose adaption of Pu-Sing Ling’s Strange Stories from a Chinese Studio that Hark himself would adapt a few years later as A Chinese Ghost Story (1987). Lin initially found fame with cross-dressing roles in The Dream Of the Red Chamber (1978) and Peking Opera Blues (1986). She was a multiple Taiwan Golden Horse Award nominee but didn’t win one such award until Red Dust (1990). The award led to a second peak in her career with the likes of Dragon Gate Inn (1992) and Swordman II (1992). Lin would be put in a white wig in the fantasy wuxia The Bride with White Hair (1993), in both the original and its sequel as well as in the disastrous and widely derided Louis Cha adaptation Dragon Chronicles – The Maidens of Heavenly Mountain (1994).

Before becoming a regular in the Girls with Guns HK action genre Moon Lee scored her first role of note as Mu Sang, high guard of the Countess Of Jade Pond in Zu: The Warriors from the Magic Mountain. In the following years Lee established herself as one of Hong Kong’s most elegant low-budget action stars by appearing in Teresa Woo San’s Girls with Guns archetype Angel (1987) alongside Yukari Oshima and Elaine Liu. For the next 6 years Lee would star in over 25 different action productions, including Princess Madam (1989), Devil Hunters (1989), Mission of Condor (1991), Mission of Justice (1992) and Kickboxer's Tears (1992). By 1993 the Girls with Guns genre was all but spent with budgets dwindling even further and productions relocating to the Philippines, Lee bade the acting profession farewell. Norman Chu was a Shaw Bros veteran who played a variety of roles in offerings as diverse as The Flying Guillotine (1975), The Mighty Peking Man (1977), The 36th Chamber of Shaolin (1978), Duel to the Death (1983), Sea Wolves (1991). Chu was a regular in Louis Cha adaptations appearing in The Battle Wizard (1977), Demi-Gods and Semi-Devils (1982) as well as Dragon Chronicles – The Maidens of Heavenly Mountain (1994).