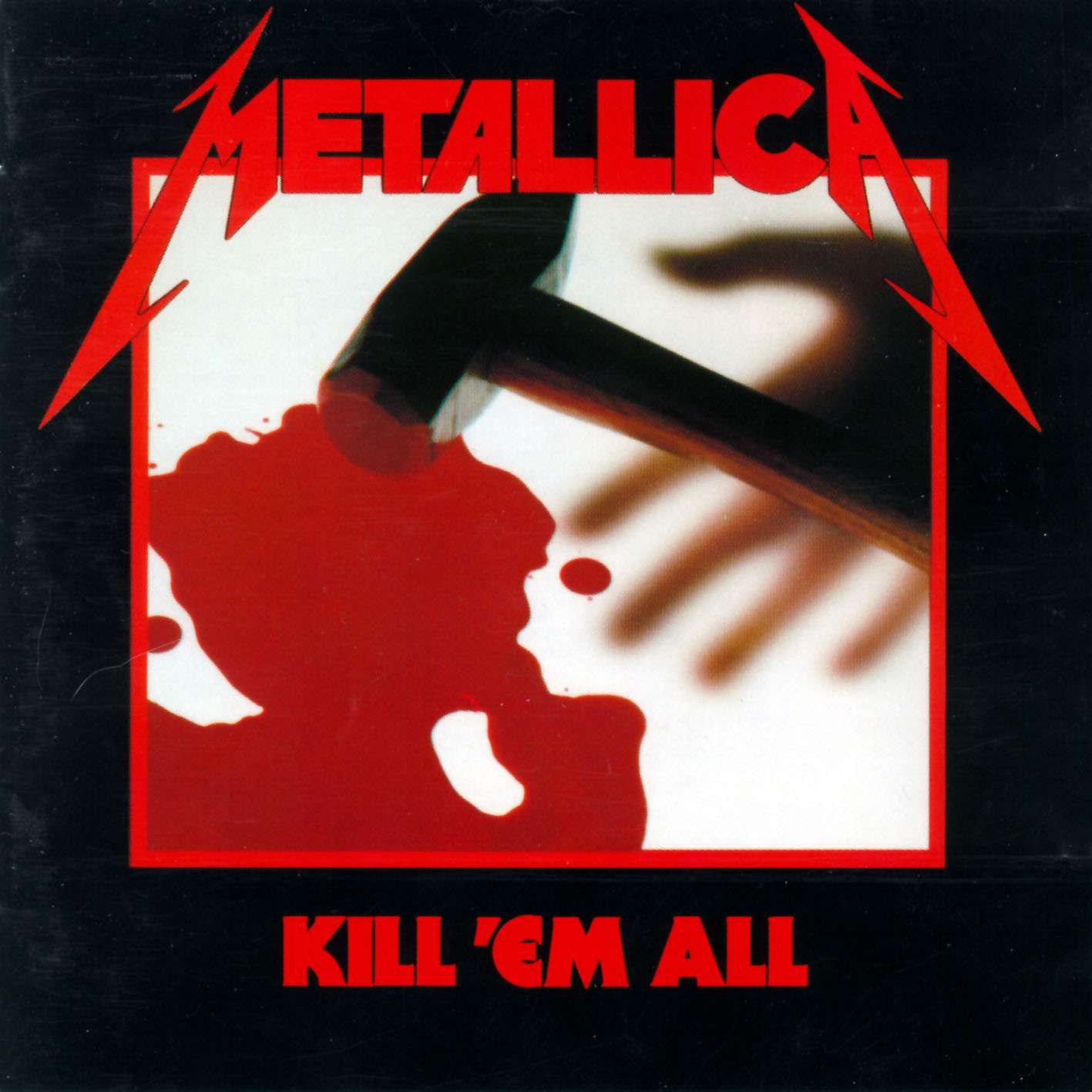 Once upon a time Metallica were just a bunch of zitty, angry adolescents in leather jacks with bad breaths cranking out heavy tunes they loved themselves. In that time they were hungry for success and would stop at nothing to achieve their goals. As much as anything the band was the life’s work of Danish émigré Lars Ulrich, a self-confessed New Wave Of British Heavy Metal fan, who was looking to put a heavy metal band together. It was with the arrival of one James Hetfield (rhythm guitar) that drummer Ulrich was truly able to bond, and this axis continues to define the band’s creative direction to this day, for better or worse (mostly worse). “Kill Em All” is an anomaly of sorts in the band’s classic metal era as it is a mish-mash of holdovers from the members’ previous engagements, a number of songs co-written by a member no longer in their ranks and what is there of original material gets by mostly on attitude than actual songwriting.

What sets “Kill ‘Em All” apart from the rest of Metallica’s early catalog is how obvious it is about its influences. It doesn’t take a whole of imagination to picture that everybody in the band at the time were fanatics of the likes of UK proto-metallers Venom and Motörhead. The latter becomes especially clear in how much Metallica directly lift from its infamous UK forebears: the riff construction, the simple but aggressive drumming, the raw punk energy, the lyrical subjects and the construction/rhyme schemes of said lyrics, etc – just to mention the most obvious characteristics. On all other fronts it sounds like a band trying it darndest to outdo its regional competition in terms of speed, heaviness and overall extremity. The album represents Metallica at its most youthful, it is the first out of four records of the band’s classic metal era, and it is a mandatory purchase for anybody that considers him/herself a serious fan of the genre. It is crude, it is juvenile but it also is the most brash, honest and straightforward album this band would ever write. 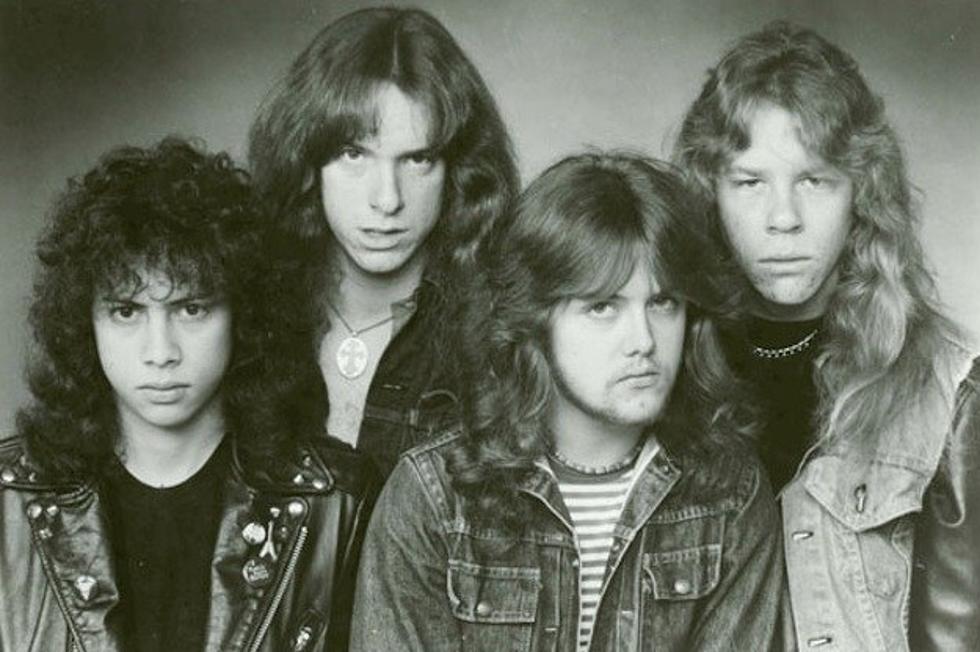 There is a very “rehearsal” quality to this material as it mostly feels like an actual gig captured and cleaned up roughly in the studio. “Kill ‘Em All” for the most part is a band still in search of what works and what doesn’t. As a result a lot of the songs pile up on the riffs but also tend to sound anticlimactic and unfinished. This is a young, eager and enthusiastic heavy metal band banging out whatever song material met their initial criteria but the debut has little of value to offer otherwise. Already on the first record Castro Valley-born bassist Cliff Burton is the most musically gifted and technically accomplished member of the unit with lead guitarist Kirk Hammett not close behind. The young James Hetfield still reluctant in his position as vocalist, and drummer Lars Ulrich actually sounds as if he could surprise the listener had he kept honing his percussive skills along with the other musicians. The album is a dusty relic of a more innocent time in the underground metal scene. Forging together elements of hardcore, punk and NWOBHM along with a healthy dose of bravado Metallica delivered their first studio record with “Kill ‘Em All, one that helped birth a new subgenre of metal along the way. By many “Kill ‘Em All” is considered to be the first genuine thrash metal record.

Originally based in Los Angeles, Metallica relocated to San Francisco at behest of Cliff Burton who was still in the band Trauma. Taking a look at the tracklist at least a third of the album was culled from the members’ previous engagements. ‘Hit the Lights’ was a song Hetfield carried over from his previous band Leather Charm. Infamously, early lead guitarist Dave Mustaine was fired in April 1983 for his drug and alcohol problems, overly aggressive behavior and clashes with bandmates. He received co-writing credits on four of the songs on “Kill 'Em All”. The songs ‘The Four Horsemen’ (originally titled ‘The Mechanix’), ‘Jump in the Fire’, ‘Phantom Lord’ and ‘Metal Militia’ were primarily written by Mustaine, most of ‘The Four Horsemen’ was written by Dave Mustaine when he was in his previous band Panic. Two other Leather Charm songs 'Let's Go Rock n' Roll' and 'Handsome Ransom' would be disassembled only to become 'No Remorse'. ‘(Anesthesia) - Pulling Teeth’ is a bass solo by Burton, with some accompaniment on drums by Ulrich. A song he carried over from his prior band Trauma. Much of the lyrics revolve around metal fandom, the culture and band life. They aren’t exactly good, and only ‘The Four Horsemen’, ‘Jump In the Fire’ and ‘Phantom Lord’ deviate from the form.

If anything “Kill ‘Em All” is a powerhouse of raw energy and reckless abandon. Never again would the band sound as enthusiastic as they do here. All songs rip into the listener without much hesitation, and while the writing hadn’t yet stabilized there is a swagger and a “je m’en fou” mindset never again seen on the records that would follow. This was a young band, hellbent on making it big and not giving one iota about what anybody thought. On later records Metallica formulized their songwriting, working on a better pace and structuring its records in similar formats. On “Kill ‘Em All” they wrote songs like each one could be their last. Granted, the lyrics are juvenile and a lot of the times the songs go nowhere in particular, but the infectious delivery and breakneck rhythm sections redeem of what in essence a rehearsal put to tape. This record is the very anthesis of that the self-titled record they would release a mere eight years later. Like Slayer’s “Show No Mercy” (that was released five months after this) it is a lovenote to all of the band’s various inspirations. It’s crude, it’s silly but it also one of their best.

Metallica recruited Kirk Hammett, a self-professed Motörhead fan and a one-time student of Joe Satriani, who previously played for Exodus. Hammett, whose guitar solos on the album were partially based on Mustaine's original solos (the first four bars of most solos were written by Mustaine) really excels here, and only partially shows his finesse and emotion that would surface in later records. Truthfully, it are the three members other than Ulrich that steal the show on this brazen and often silly excursion into proto-thrash metal. The most obvious showstealer is bass guitarist Cliff Burton who pops and throbs away audibly both supporting and oozing around what the guitarists throw at him. Hetfield's highly technical rhythm guitar style stands out, along with his somewhat comical vocals. For a record highly inspired by hardcore and punk in both energy and riffing it are the leads and solos co-written by Mustaine and finetuned/performed by Kirk Hammett that deliver the true fireworks. They stand in stark contrast to the brazen, forward style of the riffing and show a keen musician that understands his craft. As suggested earlier the weakspot is, and always will be, drummer Lars Ulrich. His performance on “Kill ‘Em All” isn’t especially varied, but his style is laid bare are – and despite the band’s strong songwriting evolution on records to come his technique would never drastically improve. Everybody was getting better at their instruments, but for some reason Ulrich never quite catched on to the instrumental prowess of his partners. It is an ailment that would continue to haunt Metallica long after they abandoned metal for a more alternative rock style and mainstream stardom.

Recorded in less than three weeks in May 1983 at Music America Studios in Rochester, New York with producer Paul Curcio the debut is the result of years toiling away in the underground. In the next few years Metallica would have short writing - and studio sessions that surprisingly led to incredibly honest and poignant music. Unabashedly cheesy, criminally underdeveloped and hopelessly juvenile by today’s standards “Kill ‘Em All” sees Metallica at its most eager and hungry. It would merely form the template for the three more critically acclaimed records that followed it, yet it remains a curious anomaly in the early catalog of San Francisco’s most enduring heavy rock act. That the band continues to play songs live from this album to this day is testament to the everlasting legacy and importance of this underappreciated and often overlooked debut. “Kill ‘Em All” might not be a pretty record, or a sophisticated one – but what it misses in subtlety and nuance, it more than compensates in sheer raw energy and endearing honesty. For these reasons “Kill ‘Em All” is an important stepping stone in Metallica’s early history as one of San Francisco’s most lauded early thrash metal acts.