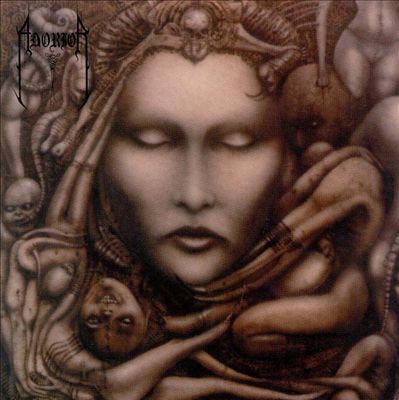 It is the little heard bands that are often the best. Adorior is one of the earlier female-fronted underground metal bands to rise to prominence before the genre’s explosion in the early millennium. Having formed in 1994 in Sutton, they are half a decade late to be considered of equal stature as early veterans Bal-Sagoth, Benediction, Bolt Thrower, Carcass, Desecration, and Napalm Death. While its output has only been sporadic at best this is one of the more underrated and underappreciated outfits of the British scene. Having released only two albums in their two-decade career Adorior, a Latin expression meaning “to rise up to attack”, has made its mark through quality, not quantity with the product they deliver. It would take about 7 years before its second album materialized.

Although typically filed under either black -, or death metal Adorior produce an elegant mix of the utmost barbaric death -, black - and thrash metal. Like long-running Australian war metal combo Deströyer 666 they too have an inclination towards traditional metal stylings that never feel contrived, or out of place. Further strengthening links with the black metal genre is the fact that this was released on the Head Not Found label imprint in 1998, a subsidiary from the Voices Of Wonder concern (that today exists under its mainstream music incarnation Voices Music & Entertainment - for which metal is hardly a focus, if at all) that capitalized heavily on the black – and Viking metal genre during the 90s. Not many were able to pull off such an ambitious combination of styles, and the only competition for Adorior in that regard was the equally unheard of Swedish powerhouse Luciferion. Whereas Luciferion lost its deeply antichristian lyrical slant on its second effort - Adorior has stayed the course and shows no sign of letting up, or mellowing out. Instead of being straight-up Satanic Adorior’s lyrics focus more on depravity, vice and general misanthropy instead of the usual blasphemous charade that many death metal bands of the time peddled. 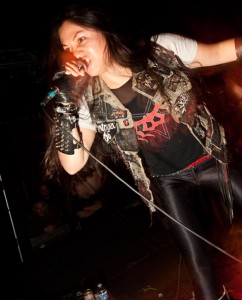 While this was the only Adorior album to feature drummer Paul Elvidge the true star of this record is frontwoman Melissa Gray. Gray successfully combines several vocal styles in the songs, usually of the extreme variety. ‘Beyond the Distant Blue’ opens with a brief bass guitar solo and Gray starts narrating sultry which creates a false sense of security. As soon as the listener has adapted to this development, she returns to her ghastly serpentine rasping style. As so many older underground metal bands Adorior realize the importance of the bass guitar, and on “Like Cutting the Sleeping” it takes a prominent place within the compositions. Even though its tone isn’t featured up, front and center, it doesn’t only function as a tool of holding the rhythm down – whenever allowed Chris Hastings plays around what the guitarists throw at him. Hastings does feature prominently with an extended bass solo in ‘A Legend’s Breath’. Elvidge provides each of the songs with thrashing beats, well-placed blasts and steady death metal rhythm sections. As so many old school institutions the drum production gives the record its booming bottom-end heaviness. While it could be argued that the drum production is on the thin side, what it does it does well. The snares, cymbals and toms all sound decent and the kickdrums deliver a concrete punch.

One of the record’s most characterizing strengths, beyond the elegant mix of genres, is that Adorior need not to play at constant breakneck pace to sound rabidly extreme. Something which a lot of today’s bands seem to forget is that extremity and aggression is derived from nuanced songwriting and clever pacing. “Like Cutting the Sleeping” isn’t the fastest, or heaviest record you’ll ever hear – but its extremity in design speaks for itself. Highlights are many on “Like Cutting the Sleeping”: ‘Beyond the Distant Blue’, ‘A Legend’s Breath’, ‘Rain Daughters’, ‘The Scarlet Hordes Of Autumn’ and ‘Of Serpents and Mirrors’ all are substantially stronger in composition than the remaining songs.  Especially the latter with its rumbling extended bass guitar runs underneath crunchy, swirling guitars and military drumming towards the conclusion. All five tracks of the band’s independently released “Beyond the Distant Blue” demo tape from 1996 were re-recorded for this release. The album’s artwork is reminiscent of the work of the late H.R. Giger in its monstrous grotesquery and ghastly unearthliness. Nothing about “Like Cutting the Sleeping” screams extremity in its presentation, in fact going by appearances you’d be more likely to label this a melodic release on visuals alone. That it defies expectations is what lends this record its sense of chaos and extremity.