For the first time, and certainly not the last, prolific Filipino director Cirio H. Santiago – a specialist in low budget Vietnam war movies, women-in-prison flicks and post-apocalyptic Mad Max (1979) ripoffs – remakes his earlier TNT Jackson (1974). Filmed from a screenplay co-written with co-star Ken Metcalfe, Naked Fist recycles the plot from TNT Jackson, and Robert Clouse infinitely superior Enter the Dragon (1973). Not content to riff on better movies Naked Fist lifts most of its music from Shogun Assassin (1980), and the trailer is set to a bootleg rendition of B-52’s ‘Planet Claire’. Santiago would plunder the same well a third time with Angelfist (1993) replacing Jillian Kesner with late shampoo heiress Cat Sassoon. 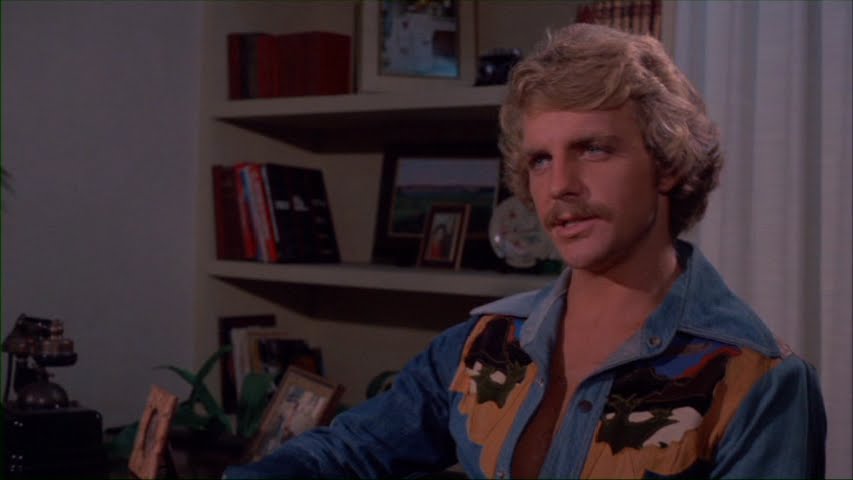 Keeping up Santiago’s tradition of female-centric actioners Naked Fist stars former model Jillian Kesner (who holds a B.A. in business from Colorado university). Kesner appeared in Happy Days as Fonzie’s girlfriend Lorraine, The Rockford Files, T.J. Hooker, and Mork & Mindy. Kesner was married to cinematographer Gary Graver at the time of Naked Fist and Raw Force (1982). Graver, who directed adult features under the alias Robert MacCallum through the 1980s, was a cinematographer who collaborated frequently with Jim Wynorski lending his talents to Alienator (1990), Sorceress (1995), and many others. Both tried restorating the unfinished Orson Welles film The Other Side of the Wind. Following Graver’s passing in 2006, Kesner continued work on the preservation of Welles’ cinematic legacy. Kesner passed away from staph infection, a complication from leukemia, in 2007. 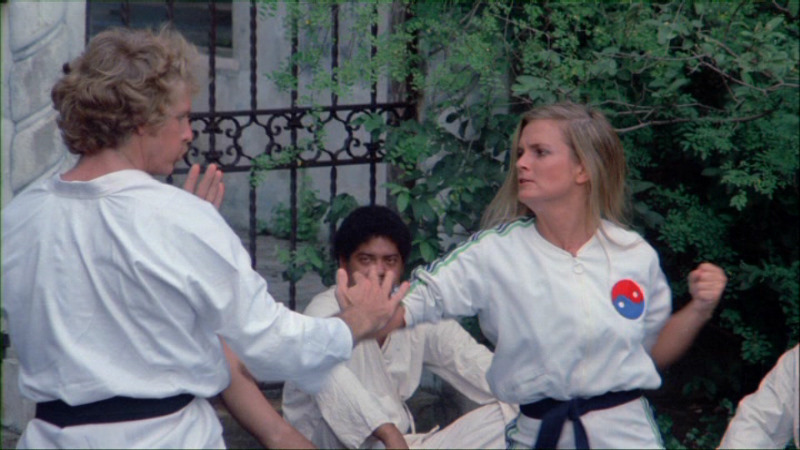 Naked Fist claims that Kesner was the 1981 “grand prize winner at the Black Belt Olympics”, but nothing seems to substantiate that claim, neither are there any indications that she had any training in the field of martial arts, or any experience in hand-to-hand combat. For all intents and purposes, Kesner is and was no Moon Lee, Michelle Yeoh, Cynthia Khan - and certainly no Angela Mao. Naked Fist was released through Roger Corman’s New World Pictures, who ordered the filming of two extra scenes to capitalize on Kesner’s attractiveness. Director Allan Holzman was brought in to helm said two scenes: a warehouse brawl that has Kesner gradually loses clothing, and the second a not particular riveting simulated sex scene. Despite having the absolute bare minimum in terms of plot Naked Fist frequently stalls, when not coming to a complete standstill, whenever Kesner is required to shed fabric, engages enemies in combat, or does both at once. 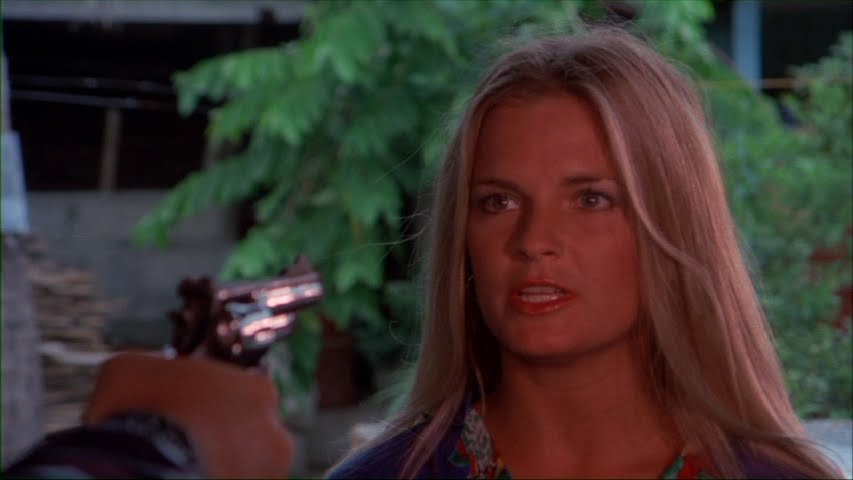 Martial arts instructor Susanne Carter (Jillian Kesner) travels to the Philippines to investigate the mysterious death of her reporter sister Bonnie (Carolyn Smith). No sooner has Carter entered her hotel in Manila and she’s accosted by two robbers while wearing nothing but her knickers. A scene that was first seen in earlier TNT Jackson, and one that Santiago would reuse once more in Angelfist (1993) with Cat Sassoon and the breathtaking Melissa Moore. The screenplay never bothers to establish whether the two hotel thugs were working for the drug ring, or whether it was just a random encounter. Judging that the same thing happen to Keith Cooke in Albert Pyun's Heatseeker (1995) one concludes that this sort of thing is typical in the Philippines. In the San Francis Bar Carter meets barman/owner Pete (Pete Cooper, as Peter Cooper) and Rey (Rey Malonzo, as Raymond King). For no apparent reason a brawl breaks loose. Having meted out swift punishment to all that assail her, Pete and Rey agree that Susanne is “all right”. Deciding to investigate Chuck Donner (Darby Hinton) after obtaining a picture of him on her sister’s camera, Rey suggests Carter uses wanting to learn Arnis as a front for her investigation. Ever so eloquent, Susanne calls Arnis de mano “the thing with the sticks” when talking to Rey’s master while visiting his training camp in the nearby jungle. 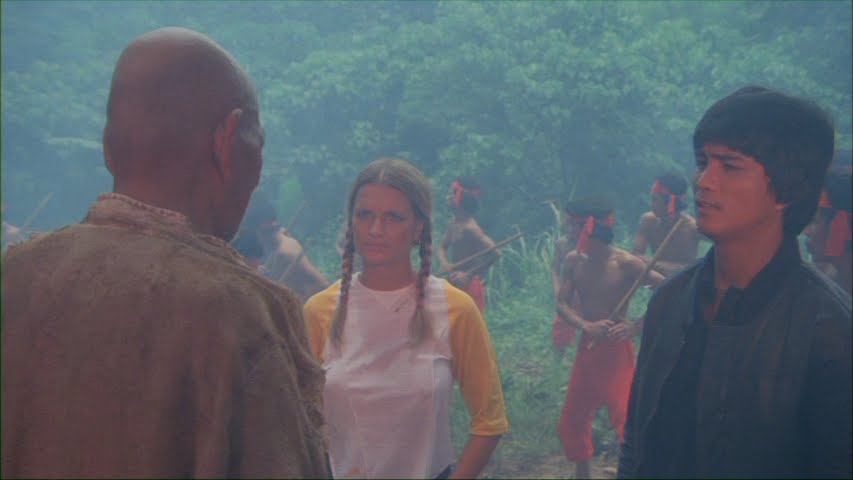 At a legitimate martial arts venue Carter initiates contact with Donner under the pretense of looking for a place to work out, and to make money to pay for her travel expenses. “She’s good. Too good,” one character observes, “she’s a martial arts teacher. 6th dan black belt," one that "owns her own dojo in L.A.” In the opening fight on the theater stage Omar Camar, one of the most senior Aikido instructors in the Philippines, is seen dishing out punishment. Watching a master at work Carter simply shrugs it off as “this kid’s stuff” and assures Donner that she’s up for it, “if the money’s right!” Erik Stoller, Ken Metcalfe in a role he inhabited once before in TNT Jackson, urges Chuck to remain vigilant, but he’s soon smitten with the high-kicking hottie. In Angelfist, Santiago’s second reiteration of TNT Jackson, Metcalfe has but a minor role. Meanwhile Erik’s girlfriend Malow (Santiago regular Chanda Romero) has her reservations about the way Stoller conducts his illicit business. 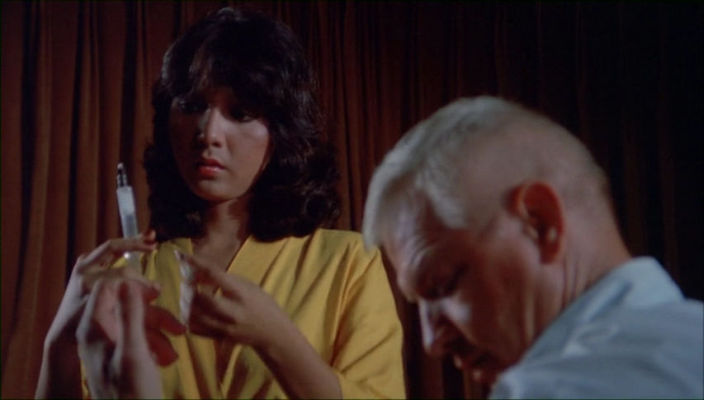 In a stunning error of judgment that will ultimately spell his demise Donner decides to show The Arena, a venue for high-stakes clandestine underground death matches that was seen earlier in the Cannon produced Enter the Ninja (1981), to Carter. While continuing her investigation into the circumstances surrounding her sister Bonnie’s death Susanne bones up her Arnis de mano knowledge at the training camp of Rey’s master all while doing some boning of her own to keep Donner at bay. Not letting sleeping dogs lie Carter is soon accosted by a number of police thugs, led by one Tony (Tony Ferrer) warning her to stay away from Donner and the drug cartel, Carter continues her investigation despite the obvious level of resistance. The thugs soon get a first-hand experience of Carter's Naked Fist. 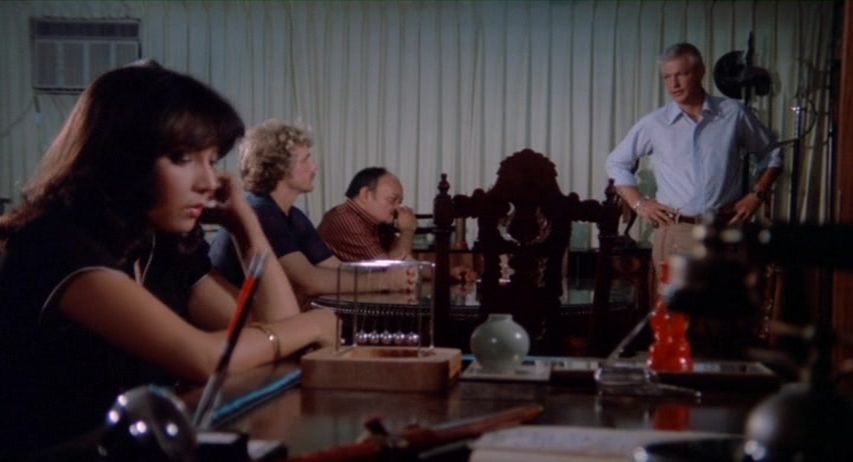 Having catched her breath Carter is then accosted by Grip (or Griff in some prints, Santiago regular Vic Diaz) and his thugs, who come armed with a cobra and what he calls “truth serum” and want to know her true motives. In a scene later recreated in the John Woo directed Jean-Claude van Damme actioner Hard Target (1993), Carter punches Grip’s snake out cold and throws it in Grip’s face. Chuck happens upon the aftermath of the fight, and decides to take Susanne to a training camp for The Arena combatants. After partaking in one of the matches Carter leaves disgusted, and is followed yet another group of thugs. Fighting off goons one by one Susanne is forced to take off her dress and heels before slipping into a nearby warehouse. It is here that the first of two Allan Holzman directed scenes are spliced in. During an economic chase through a hallway, and for no apparent reason other than to be included in the promotional trailer, Carter bends over alluringly doing a “come hither” finger-wag while looking seductively at the camera. Moments later Susanne kicks one thug into a running circular saw in a scene later refurbished in the Andrew Davis directed Steven Seagal actioner Under Siege (1992). 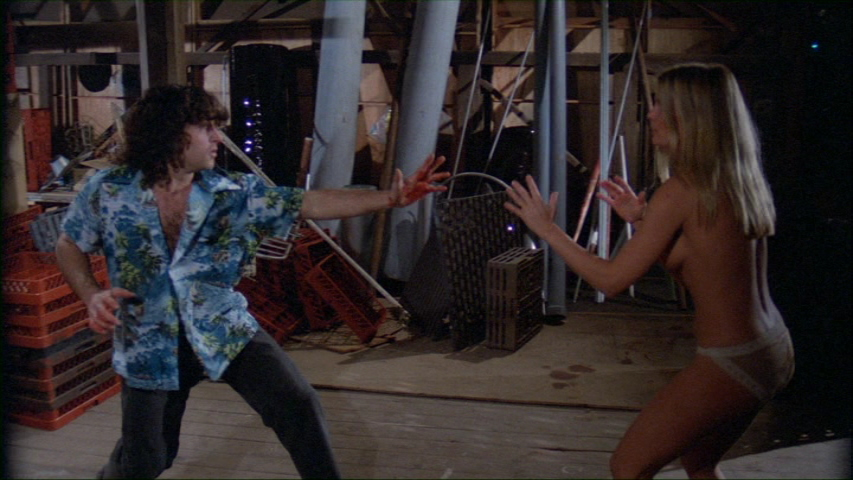 A thug in a Hawaii shirt lunges at Susanne dangerously with a sickle slicing her front-fastening bra open - and miraculously not hurting her in the process - while remaining sturdily in place. Carter discards her bra and Naked Fist then recycles the brawl from TNT Jackson wherein Playboy model Jeannie Bell engaged in topless kung fu. In what must be the movie’s most clever sight gag the topless fight is situated in front of boxes labelled Rack Master. Whether this particular sight gag was envisaged by producer Corman, or directors Santiago and Holzman, was never disclosed. In what is either a brilliant piece of reverse psychology, or alternatively a display of Carter’s obtuseness – as she has pieced together clues that Erik (and Chuck) are responsible for her sister’s death at this point - she beds Donner in a drawn-out, über sleazy, neon-lit 4-minute sex scene that includes foreplay with knives, that was helmed by Allan Holzman at behest of Roger Corman. During the sex scene Kesner says, in a line scribbled straight from an adult feature, “I can feel the blood pulse inside your head” – she never specifies which head. At this point Malow has informed Susanne that she’s a deep undercover narcotics operative, and that it was Erik that ordered Chuck to kill Bonnie. Carter confronts Donner in The Arena for a match to the death killing him by dual ocular impalement. 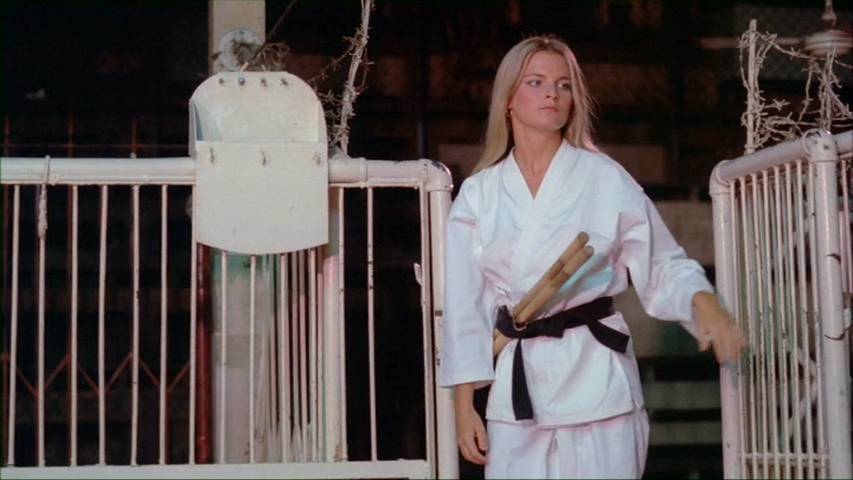