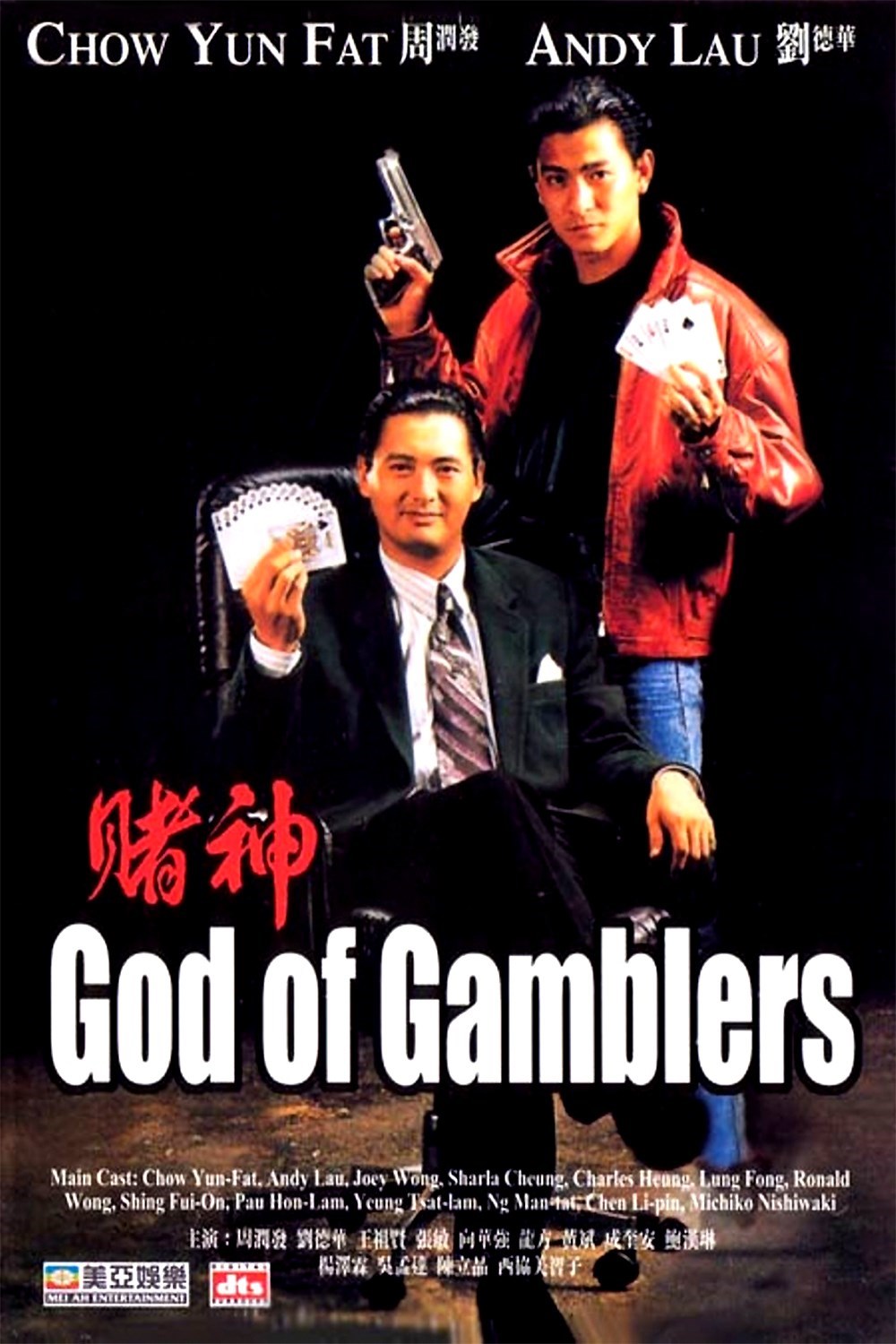 Like many a popular Hong Kong property the God Of Gamblers franchise has a confusing history with sub-franchises, spin-offs, and regular sequels following its initial box office success. What counts as canon largely depends on one’s personal preference as most movies in the franchise share the same talent and themes, but largely exist in their own continuities, an exception or two notwithstanding. Chow Yun-Fat, Andy Lau, and Stephen Chow at various points headline the proceedings, but the deeper one gets into the series (recurring roles for Ng Man-Tat and Sharla Cheung, among others, often as different characters from one installment to the next, don’t help either) the harder it becomes to make sense of the timelines and continuity. Some of ‘em are funnier, some of ‘em are not. Some have Jing Wong directing, others do not. What does remain a constant is that the God Of Gamblers franchise is filled with action, comedy, strikingly beautiful women and exciting high-stakes gambling matches against a variety of colorful opponents.

Ko Chun (Chow Yun-Fat) is a secretive black-tie gambler blessed with the uncanny ability to win high-stakes games even when the odds are seemingly stacked against him. For that reason he is known only as the God Of Gamblers. Ko Chun has a beautiful wife in Janet (Sharla Cheung, as Man Cheung) and lives a quiet life when he's not gambling. He also is a fanatic and connoisseur of preeminent chocolate and won’t settle for any less. Ko Chun’s Japanese acquaintance Mr. Wang (Luk Chuen) requests his services for a high-stakes mahjong game against nefarious loanshark Shing (Ng Man-Tat). He, of course, agrees to help his friend to even his incurred debt. Ko Chun faces Shing and his partner miss Shi (Michiko Nishiwaki) – who, judging by her set of tattoos, is involved with the Triads - and defeats them against impossible odds. Dishonored by their loss at the mahjong game the Triads send a gang of assassins to murder Ko Chun. For protection Wang sets him up with security detail Lung Ng or Dragon (Charles Heung Wah-Keung), but he’s unable to ward off the many assailants swarming Ko Chun. 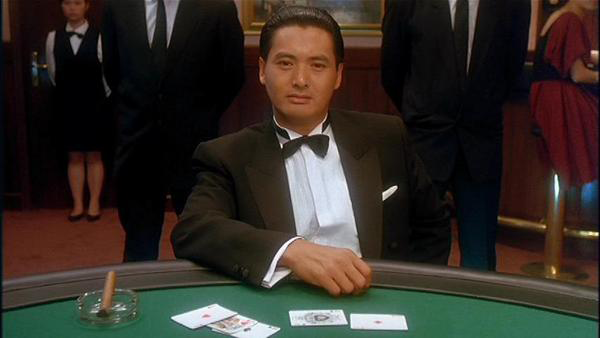 Meanwhile small-time crook Michael Chan, who calls himself Little Knife (Andy Lau) on the streets, has set up a practical joke for a neighbour. Little Knife lives in the New Territories in a small house down at the waterline with his mother (Chan Lap-Ban), his girlfriend Jane (Joey Wong) and his friend Crawl (Ronald Wong). In getting away from a swarm of Triad assailants Ko Chun runs into Little Knife’s trap and crashes down a hill injuring his head. Little Knife and his friends find Ko Chun and decide to rob him now that he’s in a helpless state. To make ends meet Jane works as a hostess in a nightclub in the big city. Little Knife has a change of heart, mostly due to Jane’s intervening, and instead takes Ko Chun into the house, and nurse him back to health. Rendered amnesiac due to his head trauma Ko Chun has no recollection of his former identity, and has regressed to an infantile state – but has retained both his masterful gambling skills and his incredible love for chocolate. Thus, in lieu of actually knowing that Ko Chun is the God Of Gamblers, they dub him Chocolate. Little Knife decides to have Chocolate checked up by Dr. Toneg Wong (Dennis Chan) just to be safe. In the interim they use Chocolate for their own personal enrichment, but Ko Chun’s former gambling associates want to coerce him into playing one final high-stakes match against revered elderly Singaporean industry legend Chan Gam Sing (Bau Hon-Lam). 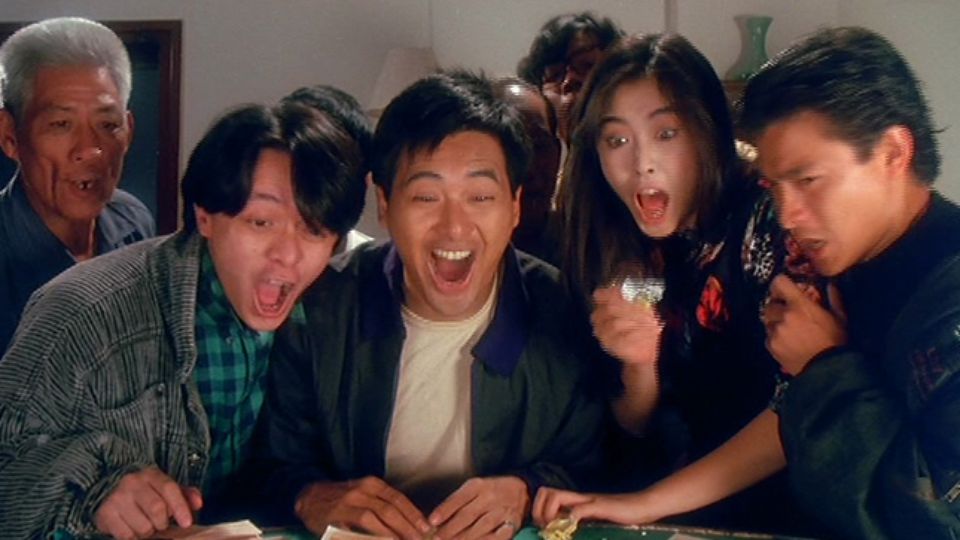 The titular star of the God Of Gamblers is Chow Yun-Fat, who at this point was mostly known as an actor in dramatic and romantic pieces as Love in a Fallen City (1984). Yun-Fat had finished a stint in the heroic bloodshed genre working with directors John Woo and Ringo Lam on HK action classics as A Better Tomorrow (1986), City on Fire (1987), Prison on Fire (1987) and A Better Tomorrow 2 (1987). For the romance An Autumn's Tale (1987) Yun-Fat won the Golden Horse Award for best actor. God Of Gamblers allowed Chow Yun-Fat to showcase his versatility as an actor as it combined all of the previous genres he had dabbled in. Jing Wong’s gambling movie broke Hong Kong's all-time box office records establishing gambling as a veritable genre. God Of Gamblers was the first high-profile appearance of Joey Wong after her star-making turn in Tsui Hark’s tragically romantic fantasy wuxia A Chinese Ghost Story (1987). Wong gets a few bars of Burt Bacharach’s ‘Raindrops Keep Fallin’ On My Head’ as a theme, to establish her character’s good nature and overall innocence. When we first see Wong she’s wearing a casual shirt and ripped denims, later she can be seen wearing a very flattering figure-fitting verdant corset-dress that accentuates her athletic build. Sharla Cheung had been in Wong’s The Magic Crystal (1986) and would feature in Royal Tramp (1992) and its sequel, Kung Fu Cult Master (1993), The Sword Stained with Royal Blood (1993) and Dragon Chronicles - The Maidens Of Heavenly Mountains (1994). 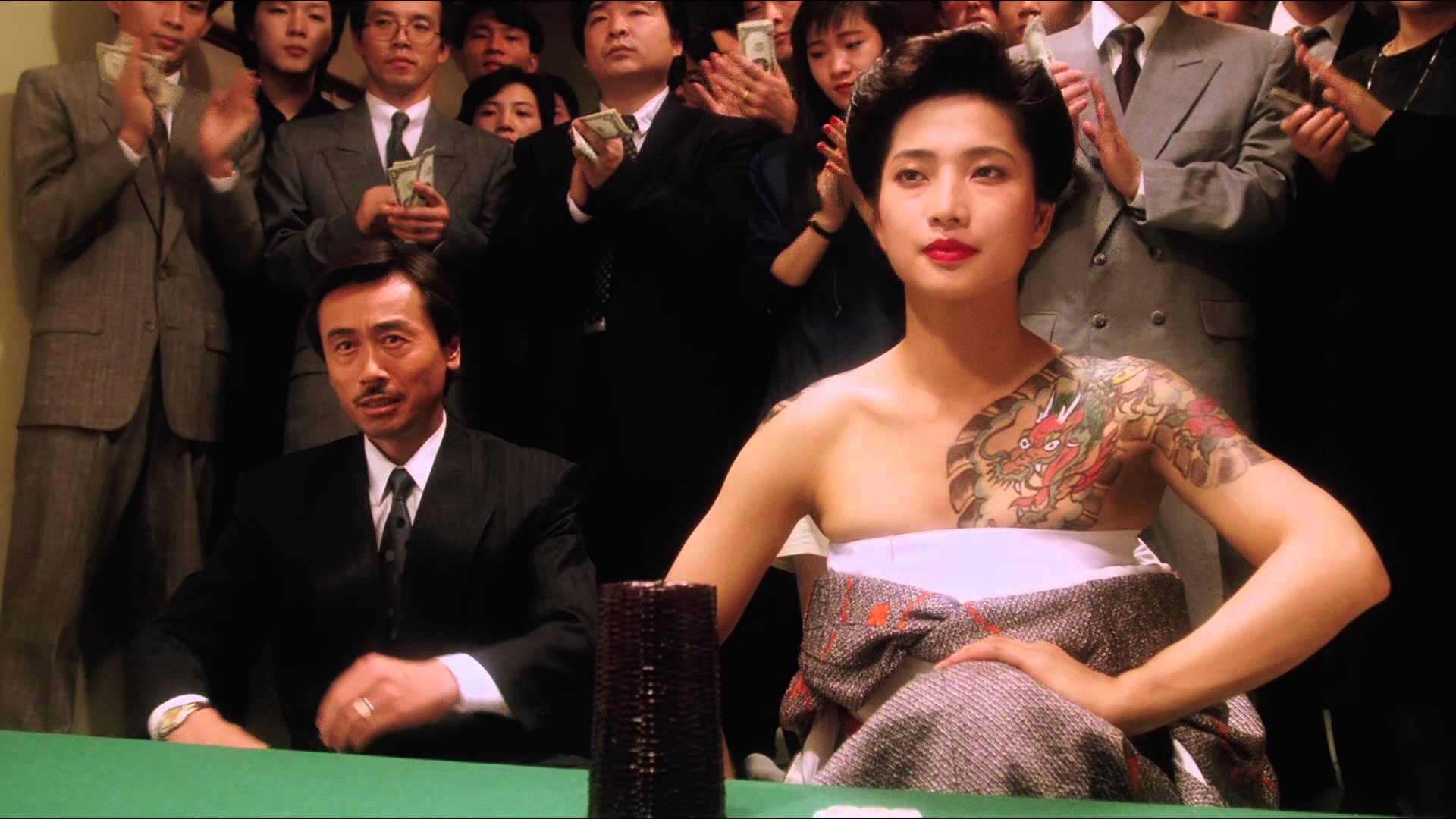 Most, if not all, the comedy is derived from Chow Yun-Fat’s Ko Chun regressing back to an infantile state after his head injury. His child-like antics, and the lenghts to which the gang have to go to provide their card-playing wünderkind with a steady stream of chocolate, do give Yun-Fat the possibility to show his range as an actor. At one point Little Knife is chased by Triad goons across bamboo scaffolding which is pretty funny. Ng Man-Tat excels as the lecherous Triad loanshark and Michiko Nishiwaki does most of her acting with mere glances during the opening mahjong game. Joey Wong, having played a good amount of spectral maidens by this point, is allowed to do something else than constantly looking misty-eyed and pouting. As Jane she usually acts as the gang’s voice of reason and conscious – and Little Knife only comes around until Jane tells him to. Sharla Cheung’s Janet is pretty much a supporting character and her involvement in the plot is minimal as such. Once Jane is reunited with Ko Chun at the end of the third act there’s a wonderful sense of chemistry between her and Chow Yun-Fat. Jing Wong always had an eye for beauty and Strawberry Yeung Yuk-Mui, who plays a card-dealing waitress at one of the games later in the movie, is no exception to the rule. 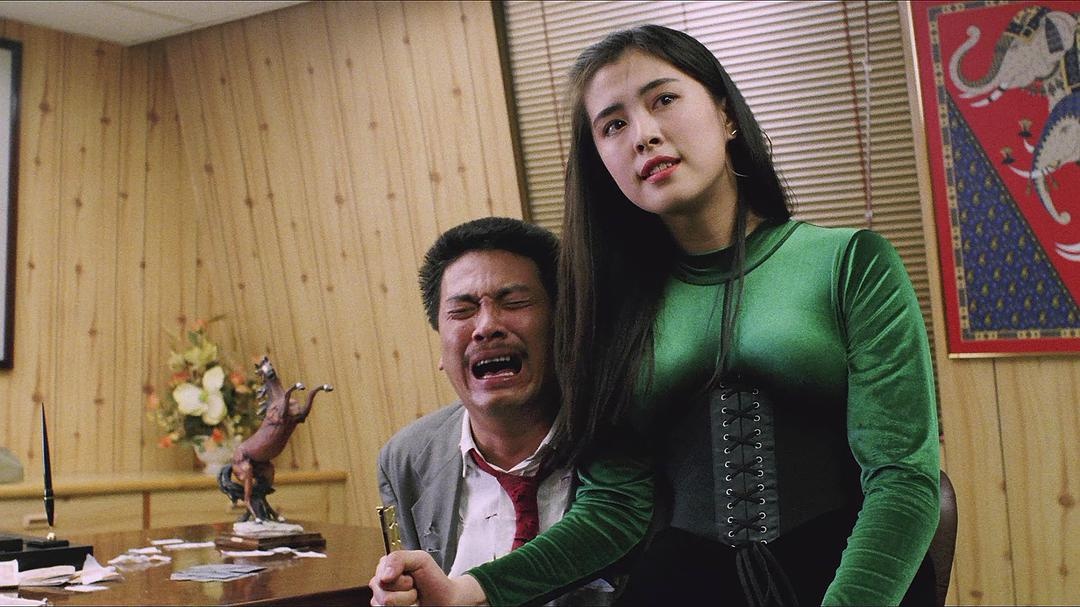 Depending on your tolerance for situational – and slapstick comedy shenanigans God Of Gamblers is one of those cross-genre exercise that could only have come from Jing Wong. When Wong’s on fire he hits the marks more often than not. When he doesn’t something as nigh on incoherent as Future Cops (1993) is usually in the cards. In the interim Andy Lau and Stephen Chow were given their own sub-franchises and The Top Bet (1991) installed Carol Cheng Yu-Ling and Anita Mui as the star gamblers. It wouldn’t be until 1994 that Wong produced an official sequel to his earlier smash hit. For reasons that remain largely oblique God Of Gamblers and its belated official sequel never quite catched on in the Western hemisphere despite pushing all the right buttons. Chow Yun-Fat, now a superstar in his native Hong Kong, would eventually conquer Europe and America with the award-winning Ang Lee period costume wuxia Crouching Tiger, Hidden Dragon (2000) with former Girls with Guns action star Michelle Yeoh and Zhang Ziyi. In 1989 Chow Yun-Fat was just starting to find his footing in Hong Kong genre cinema.