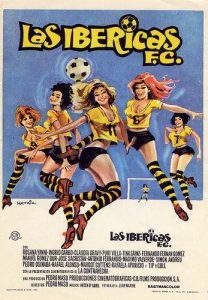 Plot: the Ibéricas make a splash, but not for their athletic ability. Hilarity ensues!

There’s a lot of things you can say about Las Ibéricas F.C.. It’s probably one of Spain’s most famous ensemble comedies of the 1970s. Ensemble comedies either work, or they don’t. Las Ibéricas F.C. obviously works, but nothing of it has anything to do with the screenplay. Not only is Las Ibéricas F.C. an ensemble comedy, it is an ensemble sports comedy – which means that there’s plenty of slapstick to be had and since there’s plenty of beautiful women about, some of the humor will be derived from a dire lack of fabric. The cast comprised of some of Spain biggest stars and young talent. It had a catchy yé-yé theme song that remains popular to this day and it pushes a strong women’s lib message as many of continental European productions did in the early 1970s. However, Las Ibéricas F.C.’s reputation as some of the worst Spanish comedy isn’t unfounded…

Las Ibéricas F.C. tells, if not the true story, at least a story of the first Spanish all-women soccer team. The real Las Ibéricas F.C. was RCD Espanyol Femenino, a national all-woman team formed by Rafael Muga around 1970. The team was not recognized in official capacity as soccer was considered an unsuitable sport for women by the Royal Spanish Football Federation and the National Movement’s Women’s Section. In 1971 RFEF (Real Federación Española de Fútbol) president José Luis Pérez-Paya stated, “I’m not against women’s football, but I don’t like it either. I don’t think it’s feminine from an esthetic point of view. Women are not favored by wearing shirt and trousers. Any regional dress would fit them better” echoing the patriarchal norms of the day. Contact sports were forbidden in Spain during the nearly 40-year fascist regime of Francisco Franco (from 1939 to 1975). They required a strength that was deemed masculine and thus clashed with the fragility of the feminine ideal as envisioned by government sanctioned National Catholicism. Practitioners of the sport were condemned as sinners and it was disapproved of by Franco’s Youth Front. The sports were considered inappropriate for women as under the National Catholicism guidelines their roles were strictly traditional, confined to those of child-rearing, family care, and motherhood. In other words, Iberian women’s right to self-determination were anything but common in 1970. 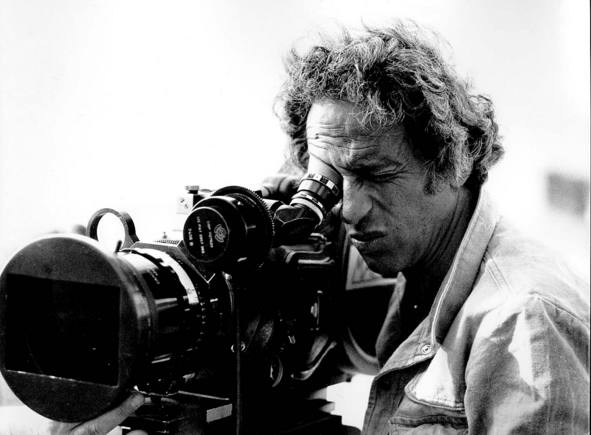 Pedro Masó was a Spanish director, screenwriter and producer who initially got his start as an actor in Sáenz de Heredias' El Escándalo/The Scandal (1943). He parlayed that into working behind the scenes in minor capacities through 1953. He started writing scripts and was soon promoted to production manager. In 1958 he wrote the screenplay for the Rafael J. Salvia comedy Las chicas de la Cruz Roja/Red Cross Girls which provided him with the opportunity to produce more domestic comedies for different companies. Having amassed the necessary experience Masó found his own production company Pedro Masó P.C. in 1961. Masó specialized in comedies most of which were directed by Pedro Lazaga and found great commercial success in the years that followed. One of Masó’s protégées was Javier Aguirre and he was responsible for discovering a young actor by the name of Javier Bardem. It wasn’t until the seventies that Masó sat in the directorial chair for Las Ibéricas F.C. (1971). Las Ibéricas F.C. is indeed memorable but mostly for all the wrong reasons. In the 1980s Masó’s cinematic output came to a crawl as he focused his energies on his lucrative career in television.

Ensemble casts are almost as old as Hollywood itself. An emsemble comedy will be broadly appealing to the masses, but it still is only as strong as its screenplay. Las Ibéricas F.C. is legendary. Legendary for all the wrong reasons, but legendary all the same. Where else are you going to see Rosanna Yanni, Ingrid Garbo, Claudia Gravy, Tina Sáinz, Puri Villa, María Kosty, Colette Giacobine, as well as José Sacristán, Antonio Ferrandis, and Luis Induni in the same movie? The cast is absolutely stellar and Las Ibéricas F.C. would have been a lot better had the screenplay been tighter. Whether Las Ibéricas F.C. is supposed to be protest against the patriarchal norms of the day, or a mere reflection of them, is never really clear through out. What is evident is that its legend as one of the worst Spanish comedies is not unfounded. For the most part Las Ibéricas F.C. is but a flimsy excuse for Masó to extensively shoot all of the lovely women’s legs, derriéres, and bellybuttons as its star players run and bounce around in short shorts and tight-fitting soccer shirts. The humour is seldom genuinely funny and it never aspires to anything but lowest common denominator chicanery. In its defense Las Ibéricas F.C. made Ingrid Garbo into a national sex symbol overnight. The theme song “Once Corazones” sung by Rosalía Garrido, one of the more popular yé-yé girls of the day together with Massiel and Karina, remains a staple in Spanish soccer to this day, and it was a fitting finale to a celebrated and loved yé-yé girl at her fin de carrière. 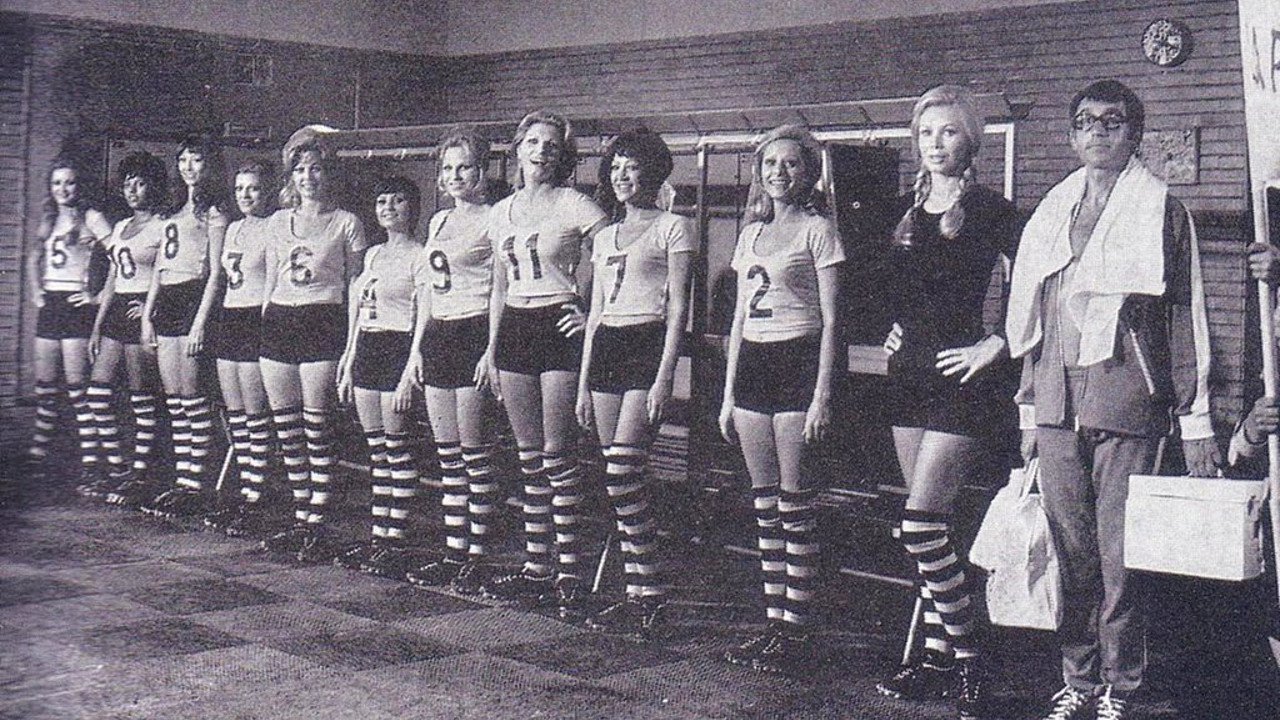 Don Gregorio (Antonio Ferrandis), a wealthy entrepreneur, has seen the lucrative potential of underground women soccer clubs that start to spring up across the country. Prescient of what the sport-loving citizenry wants he decides to put together his own all-women soccer team, Las Ibéricas F.C.. In order to give his newly-minted team the best chances of winning he hires trainer Bernardino (Manolo Gómez Bur, as Manuel Gómez Bur), masseur Bonilla (José Sacristán) and arbiter Agustín Miranda (Adriano Domínguez). After some selections the team consists of Chelo (Rosanna Yanni), Luisa (Ingrid Garbo), Menchu (Claudia Gravy), Julia (Puri Villa), Loli (Tina Sáinz), Piluca (Encarnación Peña Gómez, as La Contrahecha), Tere (María Kosty, as María Kosti) and unnamed supporting extras played by Colette Giacobine, Carmen León, Isabel Titilola García, and Luisa Hernán. Before long the Las Ibéricas are becoming a national sensation, and many of the girls find themselves becoming celebrities in the process. How will they deal with the success? Will they be able to overcome the patriarchal prejudices of their old fashioned parents - and will they marry the men they love? Las Ibéricas F.C. has all the answers, but none of it is particularly interesting.

In other words, Las Ibéricas F.C. features everybody that was somebody (and a few nobodies) in Spanish cinema. Rosanna Yanni was in The Mark Of the Wolfman (1968), Fangs Of the Living Dead (1969), Count Dracula’s Great Love (1973) (that also featured Ingrid Garbo) and The Amazons (1973). Claudia Gravy was in Marquis de Sade: Justine (1969), Adios Cjamango! (1972), The Nuns of Saint Archangel (1973) and Kilma, Queen Of the Amazon (1976). Tina Sáinz was in The Dracula Saga (1973) (as was María Kosty), as well as Colette Giacobine from Jess Franco's Nightmares Come at Night (1972). Apropos of nothing there's also Encarnación Peña Gómez (or La Contrahecha, as she’s popularly known), one of the country’s most famous bailaoras or flamenco dancers. It's a question for the ages why Silvia Tortosa, Betsabé Ruiz and Barbara Capell weren’t given a part in this.

The humour? So juvenile and daft that it would probably make Jing Wong happy. At the first try-out game the girls find out that the shorts are really, really short and that the tops barely cover their wealthy bosoms. Chelo, the designated matriarch of the team by no choice of her own, loves smoking cigars, and is continually and relentlessly chased by press mosquitos Emiliano (Luis Sánchez Polack, as Tip) and Antolín (José Luis Coll, as Coll). Luisa always attracts attention everywhere she goes, even if she’s pretty average as a soccer player. Her mother (Carmen Martínez Sierra) doesn’t like her playing soccer, and Luisa’s seeing a psychiatrist (Pedro Osinaga) to deal with her frustrations. Menchu, the queen bee of the team, is always adjusting her make-up. Loli, the youngest of the group and something of a tomboy, loves eating candy – and her mom faints each and every time she scores a goal. Luis (Simón Andreu) takes a liking to Loli. Piluca dances (and when she dances she goes and goes). Of course her old-fashioned father (Valentín Tornos) disapproves of her new hobby. The men universally and uniformly are either horndogs and/or idiots, exactly as you’d expect them to be in a lowbrow comedy like this. Two construction workers will stop at nothing to spy on the girls’ dressing room (unsuccesfully). Arbiter Agustín Miranda will whistle at the most minor of infractions, or regardless of actual faults. Meanwhile team masseur Bonilla is always looking for any and all excuses to feel up the girls. The supposed humor is offset by a far darker, and somewhat cynical tone reflecting the societal expectations of women at the time. The girls are constantly derided, ridiculed, and castigated for their hobby by anybody and everybody, be they authority figures or members of their own family. It’s exactly as groan-inducing, tedious and terribly unfunny as it sounds. 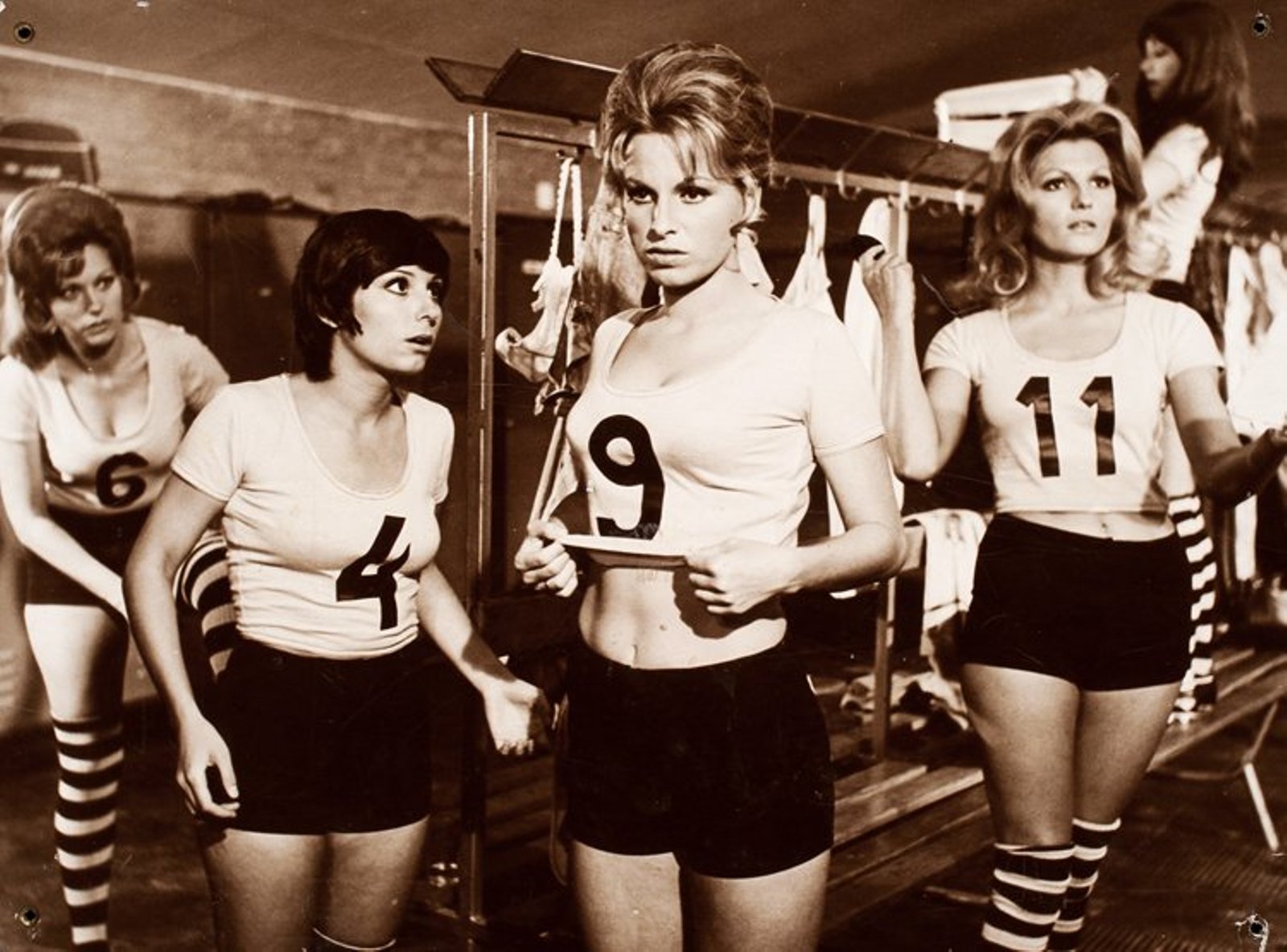 To its credit Las Ibéricas F.C. was clear proof that Rosanna Yanni, Claudia Gravy and Ingrid Garbo were indeed leading ladies that were capable of carrying entire productions. Of the supporting cast Tina Sáinz and María Kosty are the most recognizable as they would share the screen two years later on The Dracula Saga (1973). Sáinz, apparently forever the tomboy, has her own romantic subplot with Simón Andreu and judging from her performance here it’s no wonder she was eventually given the occasional lead part. Forever exploited for her innocence and tomboyish looks Sáinz’ Loli is an endearing character in what is probably the only plot worth following besides the Las Ibéricas F.C. rise to fame and fortune. Yanni and Gravy were experienced veterans by this point and their role as team matriarchs played up to their strengths. It was obviously aimed at the broadest audience possible as the inclusion of La Contrahecha evinces. Las Ibéricas F.C. is lowest common denominator comedy swill that not even an all-star cast like this could save from the terribly unfunny humor the screenplay revels in. Las Ibéricas F.C. is unfortunately maligned for all the right reasons. Claudia Gravy, Ingrid Garbo, María Kosty and Tina Sáinz all look good in soccer uniforms – but to base an entire feature around just that perhaps wasn’t the wisest decision after all. Every one of them had had starred in far better movies before turning up here.