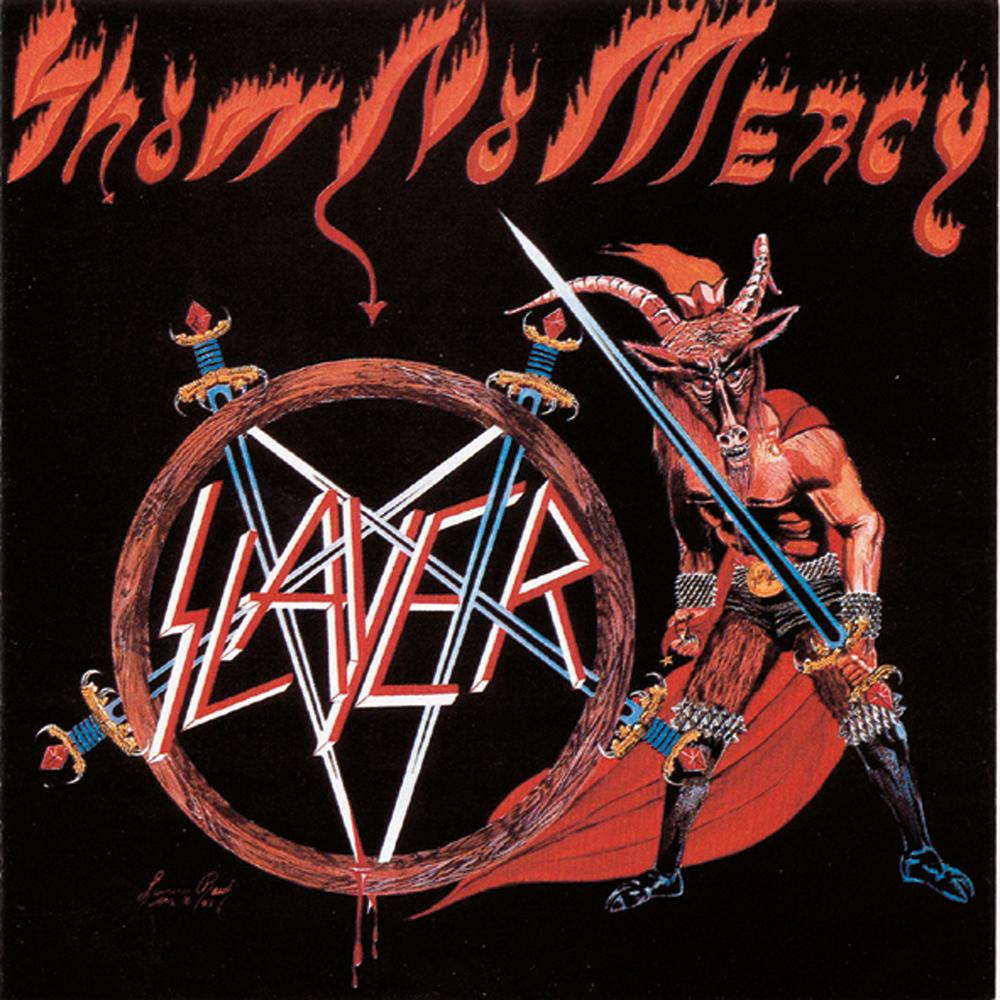 Like any young band’s first recording “Show No Mercy”, the first Slayer longplayer, was an offering marked by youthful exuberance, enthusiasm and unrelenting energy. Released in 1983 it went on to change the face of metal music forever. It is not so much an original recording as it is a brash lovenote to all of the band’s inspirations, and it are exactly those inspirations that make it the only record of its kind in the Slayer canon. Tapping heavily from the vein of early Iron Maiden, Metallica and Venom “Show No Mercy” was the first of three records that were important for the creation and early evolution of the then-emergent death metal genre. Sounding dated and juvenile by today’ standards it was nevertheless paramount in bringing a new level of heaviness, speed and intensity to the speed/thrash metal genre. This is one of a number of Slayer records that would lead to the creation of an entire branch of a new metal style called death metal. It sounds nothing like the genre it helped form, but in several respects it is the trough from which many, if not all, proto-death metal groups would feed.

The early history of Slayer can be traced back to a number of California metal bands. Kerry King (lead guitar) and Chilean transplant Tomás Enrique Araya Díaz (Tom Araya, vocals and bass guitar) both cut their teeth in a local band called Quits. Dave Lombardo was sitting behind the drumkit in Sabotage. Quits broke up resulting in Araya and King going their separate ways. Araya was working a full-time job as a respiratory therapist in a local hospital. The band was formed in earnest in 1981 by guitarist Kerry King in Los Angeles suburb Huntington Park by getting Araya back in the fold. Contrary to popular belief the band did not name itself Dragonslayer (after the 1981 fantasy movie of the same name) but right away chose for the abbreviated, and much more powerful, Slayer. As history would note King happened upon second guitarist Jeff Hanneman as he was working downstairs in the same building as he went upstairs to audition for another band. Dave Lombardo, future drummer for the band, worked as a pizza delivery guy at the time and eventually all four of the men would be drawn together due to a mutual interest in heavy metal. Slayer’s beginnings are truly humble and blue-collar.

While the band is still all over the place musically and lyrically, the classic line-up is already in place. The band is fronted by Tom Araya on vocals and bass guitar, lead guitarist and main songwriter duo Jeff Hanneman and Kerry King with Dave Lombardo providing drums. “Show No Mercy” was financed independently by the band (through funds accumulated by Tom Araya’s dayjob as a respiratory therapist, and a loan from Kerry King’s father) and recorded quick and dirty at Track Record in Los Angeles, California with Slayer’s then-label boss of the freshly formed Metal Blade Records sitting behind the console. Almost half of the record was co-written between the guitarists, with the exception of ‘Evil Has No Boundaries’ and ‘Show No Mercy’ being written solely by King. Supposedly recorded in all but 8 hours “Show No Mercy” is Slayer its infancy. History would note that it was at Kerry King’s behest that the band adopted its Satanic imagery and legendary stage productions as a way to gain notoriety in the local scene.

‘Evil Has No Boundaries’, one of two tracks penned entirely by Kerry King, is notable for its inclusion of gang shouts during the chorus. Among the ones to lend their voices to the chorus was an aspiring young musician by the name of Gene Hoglan, later of Dark Angel and Death repute, who worked as a lights/drum-tech and general roadie with Slayer during the Haunting North America 1984 tour. Another thing that is instantly notable is how much this was a carboncopy of “Kill Em All” by Metallica, that was released five months prior. Slayer took everything that Metallica did but pushed it to the extreme, with faster drumming, a rough hostile production and the type of riffing that liberally borrowed from punk rock. What Metallica had in compositional strength with bass guitarist Cliff Burton Slayer compensated in sheer energy and swagger. Slayer sounds on fire here, and Tom Araya’s vocals sound of out control, as do the scorching guitar solos. There’s an almost punk energy to the album, and the NWOBHM construction only serves to emphasize that Slayer hadn’t yet found its true voice musically. Lyrically this is the archetype from which the next two records, and the nascent death metal scene at large, would cull its subject matter. “Show No Mercy” does indeed do what it says on the tin.

Slayer’s signature leads are already in place, and the duels between the more technically refined Jeff Hanneman and Kerry King’s more straightforward style deliver most of the record’s auditory fireworks. The solos sound as chaotic and disturbing as the band’s rabid musical package and horrifying lyrical explorations about Satanic war, infernal death and Hell. The only songs that sound truly different are ‘Metal Storm/Face the Slayer’ and ‘Tormentor’ as both lay the seeds for the slower, more melodic and refined songwriting that Slayer would capitalize on with this album’s universally lauded follow-up “Hell Awaits”. These tracks sound more structured and uniformly dark and stand in stark contrast to the more straightforward ripping material of the rest of this album.  In fact, these tracks have all hallmarks that would later return in more complete form in tracks as ‘At Dawn They Sleep’ and ‘Kill Again’. Also notable is that Araya’s bass playing actively contributes to the songs and isn’t merely there for the heaviness quota.

‘Black Magic’ and ‘The Final Commandment’ are - much like ‘Die By the Sword’ or ‘The Antichrist’ - thinly veiled punk numbers put into a traditional speed metal framework. The overall simplicity of the riff set and structure of both cuts are redeemed by its epic opening, the solo section and the always relentless drumming of Dave Lombardo. ‘Crionics’ is the closest to Iron Maiden that Slayer would ever sound, and the song feels like a throwaway b-side from that UK’s band seminal records “The Number Of the Beast” or the conceptually ambitious “Powerslave”. The highlight of the record is the title track which feels like a more violent, more lean early “Kill Em All” Metallica number – and the riffs, drumming and vocal cadences would be plundered wholesale by early US death metal group Necrophagia for its “Season Of the Dead” debut. The artwork and classic Slayer logo were both created by Steve Craig. Lawrence R. Reed, the father of then-current drum/lightning tech Kevin Reed, drew the Minotaur with the sword on the album's cover. Due to the shocking imagery and violent lyrical content, Slayer received mail from the PMRC (Parents Music Resource Center) telling the band to stop releasing records – which they clearly refused to do. “Show No Mercy” is where speed/thrash metal was taken to new extremes on every front imaginable, but it was merely a dress rehearsal for greater things to come.