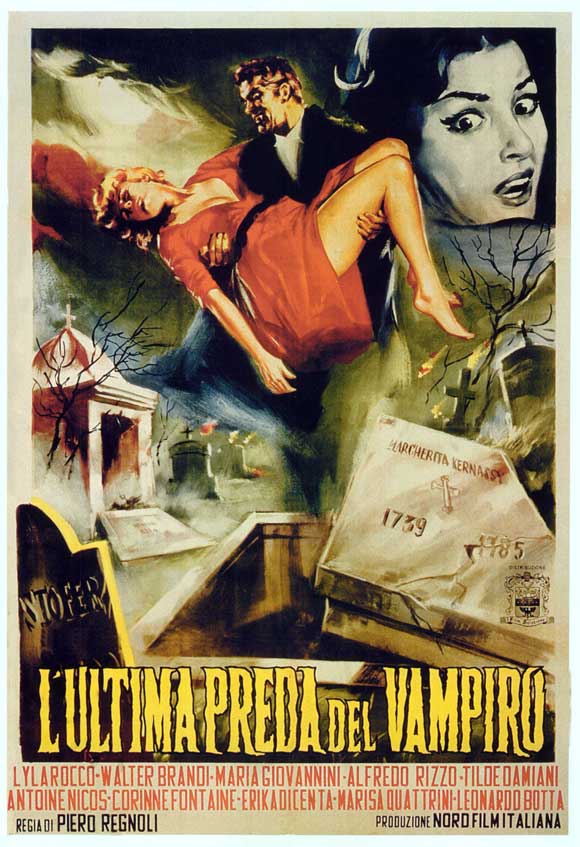 Plot: a troupe of showgirls is terrorized by a vampire in a distant castle

Italian gothic horror became something of an industry as a response to the success of Riccardo Freda’s and Mario Bava’s I Vampiri (1957) and the Hammer production The Horror Of Dracula (1958). The Playgirls and the Vampire was part of a shortlived cycle that pitted ditzy showgirls against one or more vampires. The same cycle also included The Vampire and the Ballerina (1960) and The Monster of the Opera (1964). The Playgirls and the Vampire is the more pulpy half of the already very kitschy The Vampire and the Ballerina (1960). This time it aren’t ballerinas that are terrorized by the ancient undead but a troupe of brunette and blonde, firmly-bosomed playgirls, or burlesque dancers. Who better to write and direct such a romp than Piero Regnoli, the prolific scribe who would pen a number of Gloria Guida comedies a decade later? Released domestically as L’Ultima Preda del Vampiro (or The Last Prey of the Vampire) Regnoli’s bawdy romp was, rather unexpectedly at that, prescient of the erotic fantastique that would become commonplace in Mediterranean genre cinema in the following decade with the most defining and enduring works of French, Spanish and Italian directors as Jean Rollin, Jess Franco, Luigi Batzella and Renato Polselli.

The most recognizable name of the cast is Walter Brandi, who already delved into similar territory with The Vampire and the Ballerina (1960) and would do so again with The Monster of the Opera (1964) and 5 Graves For A Medium (1965). Lyla Rocco, who looks like a young Soledad Miranda, debuted in the Dino de Laurentiis produced melodrama Anna (1951) that had a young Sophia Loren in a bit part. Rocco appeared in over thirty productions, mostly French and Italian comedies and dramas, and The Playgirls and the Vampire arrived near the end of her career. Marisa Quattrini starred in both The Vampire and the Ballerina (1960) and The Playgirls and the Vampire. Here Quattrini was given the dignity of a name part and dialog. Corinne Fontaine debuted in The Playgirls and the Vampire and her biggest role was an uncredited part in the fumetti Barbarella (1968). Erika Dicenta largely exists by grace of her platinum blonde hair and bountiful bust. No wonder she was given a modest strip routine to make the most of her very limited appearance. Tilde Damiani was one of the Amazons (along with Giorgia Moll, Daniella Rocca and Mariangela Giordano) in the peplum Colossus and the Amazons (1960), a likely precursor to Terence Young’s breasts-and-games spectacular The Amazons (1973). In a blitz career that spanned a mere 4 years The Playgirls and the Vampire was the final movie for the leggy Maria Giovannini and it probably explains why Giovannini’s part is the only to require any nudity. 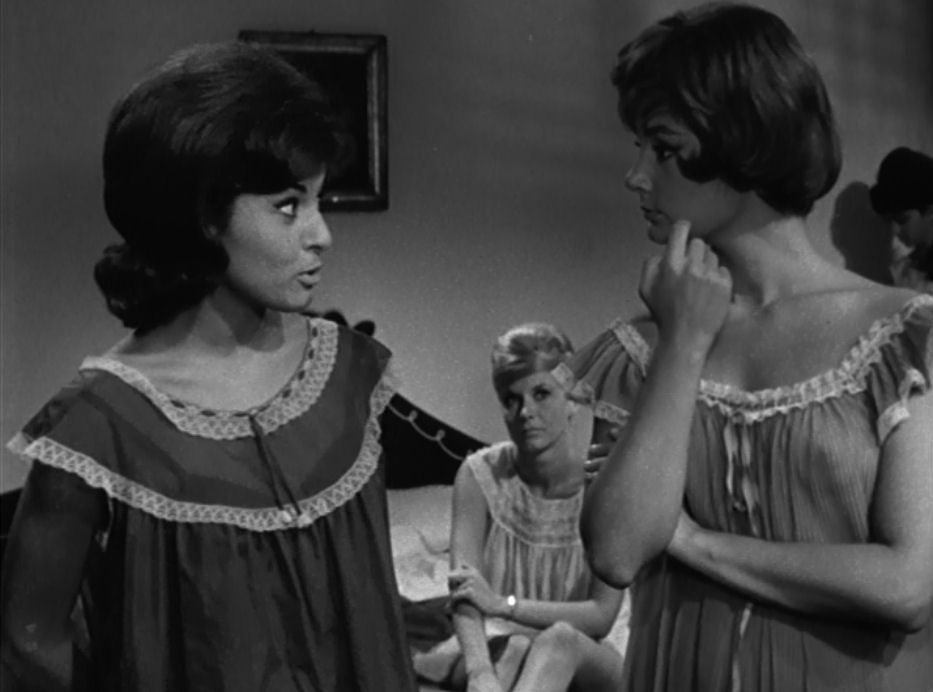 En route to their next engagement a bus carrying manager Lucas (Alfredo Rizzo), pianist Ferrenc (Leonardo Botta) and five comely burlesque dancers – Vera (Lyla Rocco), Katia (Maria Giovannini), Ilona (Marisa Quattrini), Magda (Corinne Fontaine) and Erika Dicenta (Erika di Centa, as Erika Di Centa) – find that the road has been blocked by a landslide. Not only is there the landslide blocking the road but a sudden storm forces them to seek shelter in the nearby Kernassy Castle after defaulting their hotel bill. For reasons she can’t explain Vera feels strangely familiar with her new surroundings. The mysterious castle is inhabited by world-wary nobleman Count Gabor Kernassy (Walter Brandi), his steel-faced housekeeper miss Balasz (Tilde Damiani) and groundskeeper Zoltan (Antoine Nicos, as Antonio Nicos). The Count extends his hospitality and agrees to let the troupe stay in his castle until they can continue their journey. There’s one caveat, under no circumstance is anybody, nor the girls or anybody else, to leave their chambers during the night. 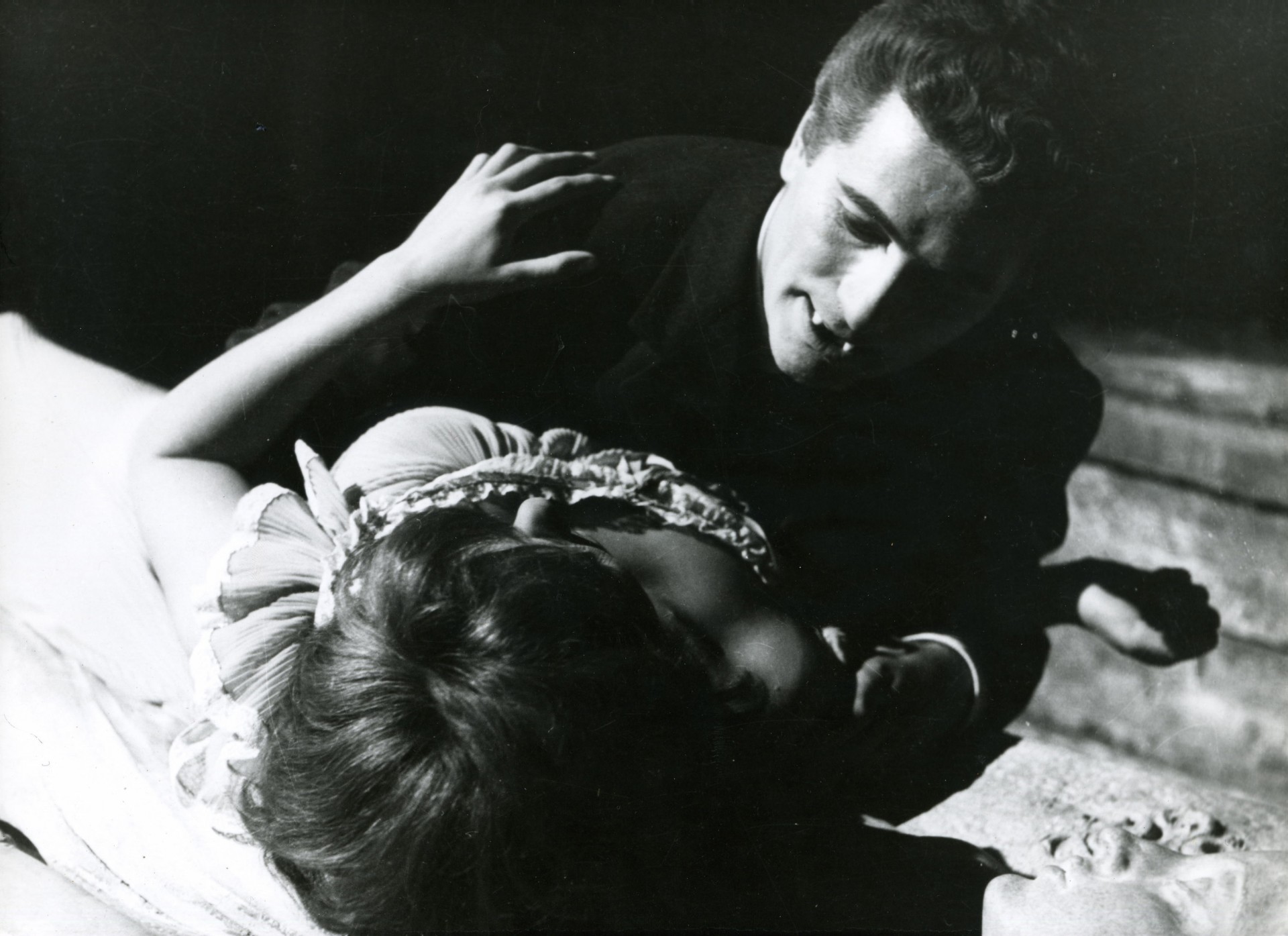 That night Katia goes wandering about the castle and is attacked by an unseen assailant. The next day the group sees to it that Katia is given a proper burial. The group mourns the loss of one of their number, but Lucas ensures that the girls can focus on something else and has them practicing their dance routines. Vera’s fascination with the Count continues and she’s drawn to a portrait depicting one of his long dead ancestors, Margherita Karnessy. At this point Vera is bitten by the same shadowy figure that attacked Katia earlier. Katia herself returns as a vampire and in turn attacks Lucas. The remaining dancers come running to Lucas’ chambers, but the girls shrug if off as a figment of their manager’s apparently very vivid imagination. When the vampire (Walter Brandi) tries to claim Vera - who bears a striking resemblance to Margherita Karnessy who has been dead for two centuries and for whose return he has been pining - as his bride against the wishes of both the vampirized Katia and Count Gabor Kernassy, a man of science on the verge of discovering a cure for the affliction that has stricken his ancestor, a confrontation between the both parties of the Kernassy bloodline is all but inevitable.

Moreso than The Vampire and the Ballerina (1960) takes The Playgirls and the Vampire the opportunity to ogle its assorted cast of young women. After an atmospheric opening scene that recreated a shot from Todd Browning’s Dracula (1931) the first thing we see is Maria Giovannini pulling up her skirt and adjusting her suspenders and stockings. It’s the sort of shot that tells exactly what sort of production The Playgirls and the Vampire is going to be. The production capitalizes heavily on its attractive cast and there's many a scene of the playgirls in translucent sleeping gowns, lingerie, or corsets. When Giovannini makes her return she’s not only a vampire, but completely naked to boot. Director of photography Aldo Greci keeps her form wrapped in shadow but when she advances to exsanguinate Lucas there’s a brief glimpse of her exposed breasts. Quite possibly Maria Giovannini was one of the earliest actresses to do nudity in a continental European gothic horror production, pre-dating Sylvia Sorrente in Castle Of Blood (1964), Barbara Steele in 5 Graves For A Medium (1965) and Soledad Miranda in Vampyros Lesbos (1971). Eroticism had always been a staple of gothic horror, no one better to embody that than cleavage-wielding María Luisa Rolando in The Vampire and the Ballerina (1960) and the positively bra-busting Graziella Granata in The Slaughter Of the Vampires (1962). 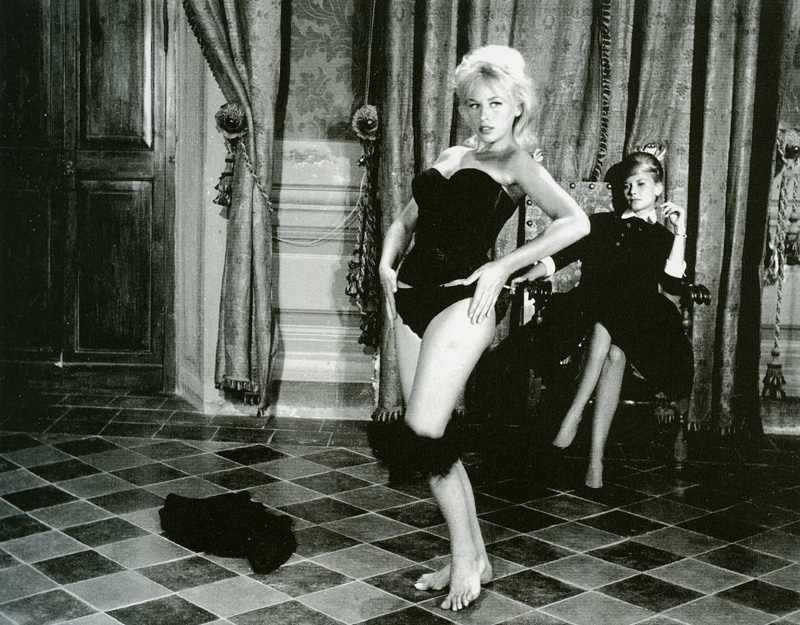 Despite no shortage of belles The Playgirls and the Vampire has a few rather glaring shortcomings. For starters is Regnoli’s direction professional but without much in the way of individual style or any kind of visual flair. Walter Brandi’s two roles as both the world-wary Count and his undead ancestor is a double-edged sword. His portrayal of the vampire isn’t exactly threatening or imposing in any shape or form. His turn in the principal dual role is important enough, as it precedes Barbara Steele’s many dual roles in the same decade, as well as Mark Damon in The Devil’s Wedding Night (1973) and Paul Naschy in Count Dracula’s Great Love (1973). The screenplay is kind of shaky. Once the love triangle involving Vera, Gabor, and the vampire is established the remainder of the dance troupe as well as their male aides are relegated to the background and pretty much forgotten about. The lone effects shot in the entire production is an endearingly cheap piece of time-lapse photography of a pencil drawing that has to be seen to be believed. It easily equals the pencil drawings in Ib Melchior’s skid row science fiction epic The Angry Red Planet (1959) from the year before. To make matters worse The Playgirls and the Vampire is cursed with one of the most laughably terrible English language dubs this side of a Filipino post-nuke or Thai action movie. 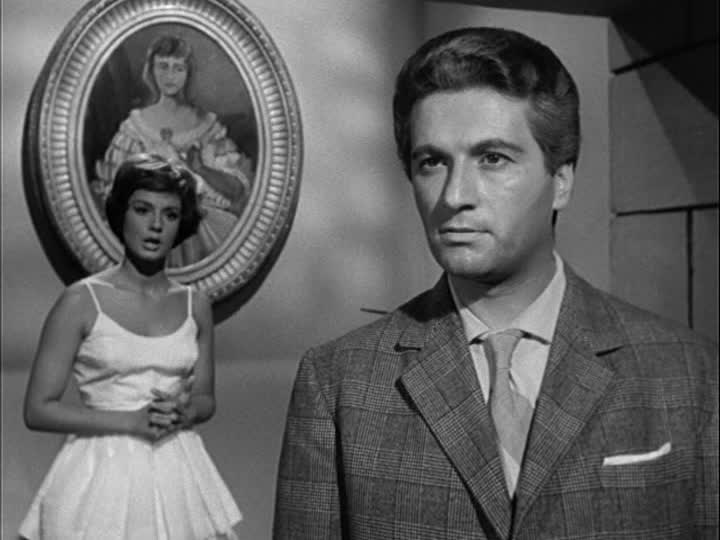 If it weren’t for the interior scenes shot at Palazzo Borghese in Rome and the selection of bodacious belles this piece of gothic horror pulp would’ve been long forgotten. Piero Regnoli wasn’t too shabby a director but his passion clearly lie in writing. For that reason The Playgirls and the Vampire is but a footnote in Italian gothic horror history. In the wild and eccentric seventies there would be a minor gothic horror revival with increased levels of blood and nudity. The Playgirls and the Vampire is much of a precursor to that although you’re hardpressed to remember it for anything else. It’s not exactly scary, the screenplay capitalizes heavily on the humor and the English dub is knee-slappingly juvenile, not to mention flat out terrible, with its choice of dialog. For a majority of its duration The Playgirls and the Vampire is stunningly mediocre and there were far better Filipino and Mexican gothic horrors than this Italian romp. Not all Italian early gothic horror was created equal – and this is a good example just why.