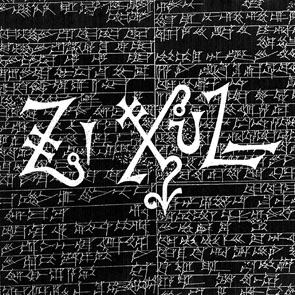 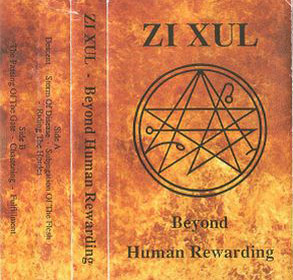 Of all the Dutch death metal bands of the late 1990s Zi Xul was probably the least recognized, and the most underappreciated. Located in Amsterdam, the band independently released a duo of demo tapes in its brief three-year lifespan. The band was centered on Jerry Brouwer (vocals, rhythm guitar) and Oskar Van Paradijs (lead guitar, backing vocals), along with a session drummer on its second demo. “Beyond Human Rewarding” was the first of two demo tapes that Zi Xul released independently from 1997 to 2000.

While Zi Xul sounds similar to any death metal band of the time - the tortured, wailing and occasionally Oriental sounding leads/solos by Oskar Van Paradijs are what truly sets apart the band from many of its peers. The percussive vocal delivery of Jerry Brouwer is reminiscent of one-time Sinister frontman Eric de Windt, and his sole appearance on that band’s “Aggressive Measures” album. Much of the twisting and crawling riffing is also reminiscent of Sinister during that particular era. Zi Xul had the makings of an underground promise, but one smothered by the fact that they couldn’t manage to find a dedicated drummer. Thankfully “Beyond Human Rewarding” is the only of the band’s two demo tapes to lower itself to the usage of a drum machine, out of necessity rather than choice as it were.

‘Descent’ sounds like a long lost Sinister song were it not for the mechanical drumming. ‘Storm Of Disease’ contains a chaotic solo, or two. ‘Subjugation Of the Flesh’ is more conventionally thrashing, and somewhat groovy in parts. In its thrashing it is redolent of a more fully death metal sounding Inquisitor song with mechanical blast segments. ‘The Passing Of the Gate’ sounds like “Blessed Are the Sick” Morbid Angel, but with a more angular riffing style, not nearly as diversified drumming, and amateuristic start-stop transitions from one section to the next. The esoteric lead/solo salvages much of the song’s rather sloppy transitions. ‘Chastening’ is a Centurian song in everything but name, albeit that Centurian hadn’t arrived at this particular level of extremity yet. In the slower parts of Zi Xul’s music there’s a lot of thrash metal architecture to be found, while the fast sections are of the contemporary American death metal of the time variety.

More than Centurian at the time Zi Xul embraced the Chaos concept of Thelemic magick. Most of the lyrics deal with the subject, and it is from the lyrics to ‘Storm Of Disease’ that this demo recording lifted its title. Only ‘The Passing Of the Gate’ deviates from the norm in the sense that it deals with the Sumerian pantheon. Zi Xul mixed the unholy death metal of early Sinister with the propulsion of Centurian, Krisiun, and the likes. The difference being that Zi Xul was more of a pure death metal band in comparison to the still thrash-influenced Centurian. The eventual merging of both acts’ creative axis would spawn the uniformly unforgiving “Liber Zar Zax”, a loosely conceptual effort about Chaos, that would prove to be a formula fatal to its very creators. On “Beyond Human Rewarding” Zi Xul is merely setting the stage for its swansong “Carven Of Old” demo.

Zi Xul is Mandarin and means “the origin of absolute evil”. In the ancient Akkadian - and Sumerian languages it stands for “evil spirit”. ‘Zi’ means ‘spirit’, and ‘Xul’ is an adjective to denote ‘evil’ or ‘great’. The lyrics, in accordance with the band name, are about occult subjects and the Sumerian pantheon. Even though the alchemy between Brouwer and Van Paradijs is strong it comes at the expense of the rhythm section. A drummer is not formally mentioned, except for Roland. In all probability it is just the brand name referring to the drum machine the duo used during the recording sessions. The bass guitar is a non-presence in terms of writing and production, excused in part that both members were guitar players by trade, and not a lot of attention was paid to it in the writing - and recording process.

Despite being a debut demo “Beyond Human Rewarding” has a distinct vision for its music, and lyrics. Zi Xul sounds a lot like “Hate” era Sinister and “Inhuman” era Desecration here, the band only being limited by its modest budget. As “Beyond Human Rewarding” was a self-produced effort, it is unsurprising that it has some of the format’s typical defects and shortcomings. This home-recorded effort has a standard 1990s demo production that sounds muffled, boxed-in and buzzy in parts. There is not a great deal of bass guitar presence through out, although the adequate drum production adds a lot of bass-heaviness. The rhythm guitars are crunchy and slashing, but aren’t very defined or detailed sounding. Van Paradijs’ solos/leads sound far better than the rhythm tracks. The band released the tape independently in 1997, a few years before the arrival of demo CDs that were to become the norm for underground bands from that point on.