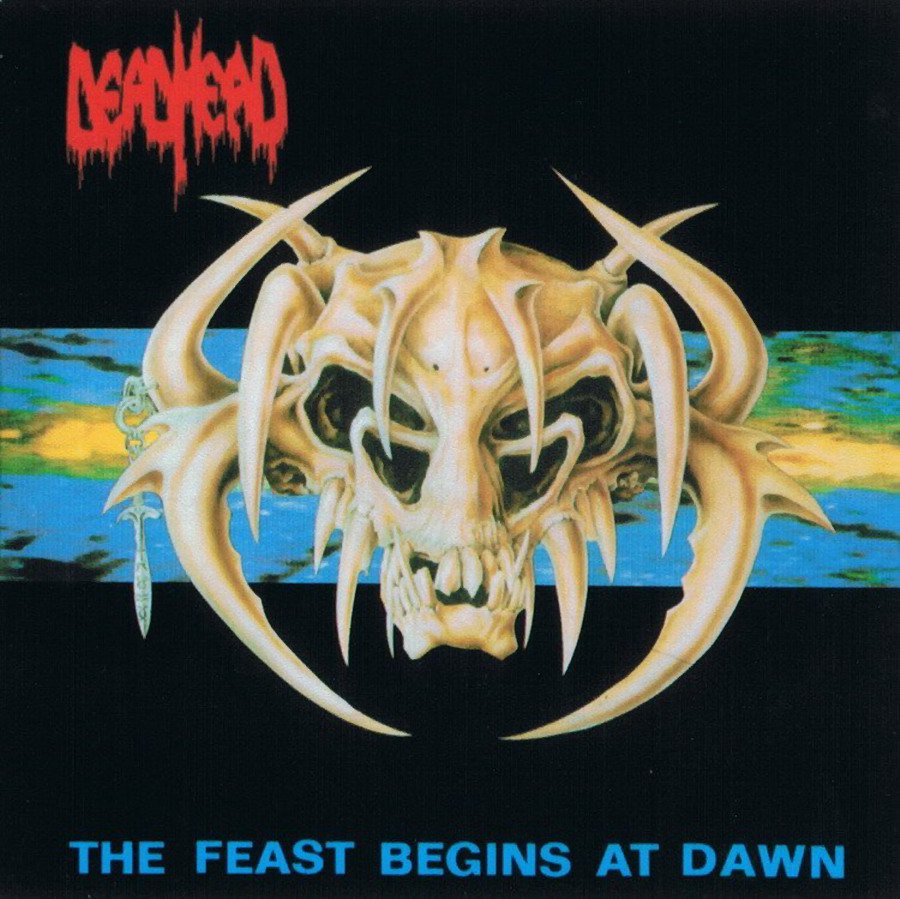 “The Feast Begins At Dawn”, the debut record of Dutch technical thrash metal mavens Dead Head, was one of incredible controlled chaos and awe-inspiring musicianship, it was also marred by a rather dry and overly processed production. Dead Head formed in 1989 in Kampen, the Netherlands and played technical thrash metal inspired by American and German greats Dark Angel, Kreator and Sadus. Even though they played thrash metal Dead Head were often considered death metal because of their intense live shows. It also helped that in some of the promo shots various band members were holding skulls. “The Feast Begins At Dawn” was the first of two Dead Head albums to be released through German imprint Bad Taste Recordings and Intercord Record Services.

‘Untergang des Abendlandes’ is a semi-acoustic instrumental and feels like an atmospheric, almost introspective Death song. Opening track ‘Saved’ originally went by the name of ‘Saved By Science’ in an earlier form. The slower ‘Desolated By the Shining’ and ‘In Your Room’ effectively foreshadow the direction Dead Head would take with its much better produced second album. ‘Below the Earth’ is an 36 second instrumental that functions as a segue for ‘Slay Your Kind’. This one should have been expanded into its own song as it is a very strong riff progression despite its obvious brevity. After two slower cuts ‘Rites Of Kandar’ ramps up the speed again, and is reminiscent of ‘Saved’ in that way. It is further enlivened by a pair of blisteringly fast leads/solos. ‘The Tribulation’ is called a ballad in the booklet, but that is something of a misnomer as it is merely an acoustic track with rasped vocals that lasts just under two minutes. ‘Pesticide’ is another scorcher full of fiery leads, and some brief growls. The title track is the highlight of the record, even though its one of the shortest tracks of the album. 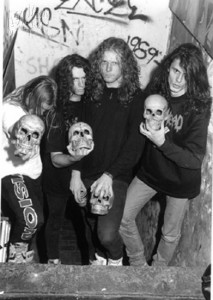 As with most debuts Dead Head plundered its archives to put together “The Feast Begins At Dawn”. ‘Pesticide’ and ‘Saved’ were re-recorded cuts from the 1989 “Promo Tape ‘89”. ‘The Tribulation’ and ‘From Belial’ were both re-recorded signature songs from the 1990 “From Belial” demo tape. ‘The Festering’ and ‘In Your Room’ were re-recorded tracks from the 1990 “The Festering” demo tape. The remainder of the songs were written specifically for the session. Tom Van Dijk’s vocals are more serpentine and raspier. The highlight of each track are the multiple leads/solos. All the songs have the drive and youthful energy that made Metallica a force of nature in its “Ride the Lightning” and “Master Of Puppets” era. Dead Head however is more extreme with rapid start-stop sections, plenty of speed bursts, frantic drumming that almost borders on the chaotic and an impressive amount of technical expertise in both songwriting and guitar playing.

The album was recorded at Franky’s Recording Kitchen with Berthus Westerhuys producing. Unfortunately “The Feast Begins At Dawn” has an overly dry production with fuzzy guitars that don’t possess a lot of body, bite or range. The bass guitar is inaudible nearly for the majority of the album, and the heavily-triggered drums sound kind of flat and clanging. Despite the flat drum tone, the kickdrums end up sounding suprisingly throbbing in what is otherwise a very clean-cut and earthy but ultimately bottom-end heaviness lacking production. The artwork was created by English-born metal – and rock journalist Garry Sharpe-Young under the pseudonym Alchemy. Sharpe-Young would make a name for himself as an author of metal-related literature, and with the Rockdetector band database (these days known as the defunct MusicMight). Sharpe-Young would also produce cover artwork for the likes of Grim Reaper, Queensrÿche and Skyclad, amongst others. On the whole it only in part lives up to the reputation Dead Head had established for itself through its demo tapes, and relentless live campaigns.

“The Feast Begins At Dawn” is marred by both an unflattering production, and unspectacular artwork. While on the surface the album doesn’t look like much the actual music is easily one of the most violent thrash metal of the time. In its mission statement to “out-thrash Slayer” Dead Head reached nearly death metal levels of violence. Especially drummer Hans Spijker was both a blessing and a curse as his sheer intensity often came at the price of tightness. Tom Van Dijk was still finding his true voice, and his shrieking snarled vocals add to the overall hostility of the record. In many ways Dead Head was the European counterpart of Austin, Texas technical metal pioneers Watchtower. The album was released in 1991, being the first of two Dead Head albums for German label imprint Bad Taste Recordings and Intercord Record Services.