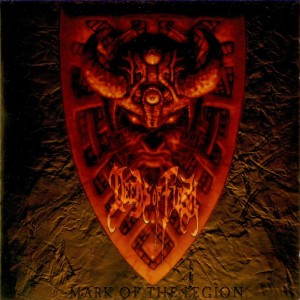 By the time “Mark Of the Legion”, the fourth Deeds Of Flesh album, was released the band had reached a new level of internal stability. The record is a very loose concept album about conflict and warfare through out the ages. It was the recording debut for new skinsman Mike Hamilton, and the last to sound bass-heavy, crunchy and organic in any way. This due to the fact that it was the last to be recorded at Moon Productions in Arroyo Grande, California with Thomas E. Gingell producing. Next to introducing drummer Mike Hamilton, the trio opted for a more linear writing style. While the drumming intensified, it wasn’t nearly as diverse as it was. On top of that it was most sound effect heavy record since the band’s 1996 genre-defining debut “Trading Pieces”.

Continuing its lyrical maturation “Mark Of the Legion” deals with a number of varying real world subjects. ‘Cleansed By Fire’ details how the creation of tribal god images, and how religion as a political tool has led to fear, blind panic and warmongering. ‘An Eternity Of Feasting and Brawling’ is about Viking afterlife in Valhalla. ‘Spewing Profligacy’ is entirely made up of famous serial killer quotes. ‘Fulfilled In Warfare’ details the history of Eurasian conqueror Attila the Hun. ‘Contest Of Wills’ is about the gladiatorial fights in ancient Rome. ‘Master Of Murder’ starts off with an exciting drum roll, and has far more diverse rhythm guitar work compared to the rest of the album. The mostly instrumental ‘Drink the Blood’ is built around a quote of UK serial killer John George Haigh, otherwise known as the “Acid Bath Murderer”. The track is reminiscent of the band’s earlier material in that it is more deliberately paced, and varied than the main portion of the record. In fact it is the only track on the record to sound far more malevolent, and darker than all that precedes it. Hamilton’s drumming is more intense, but not nearly as diversified as prior drummer Brad Palmer, or original skinsman Joey Heaslet. 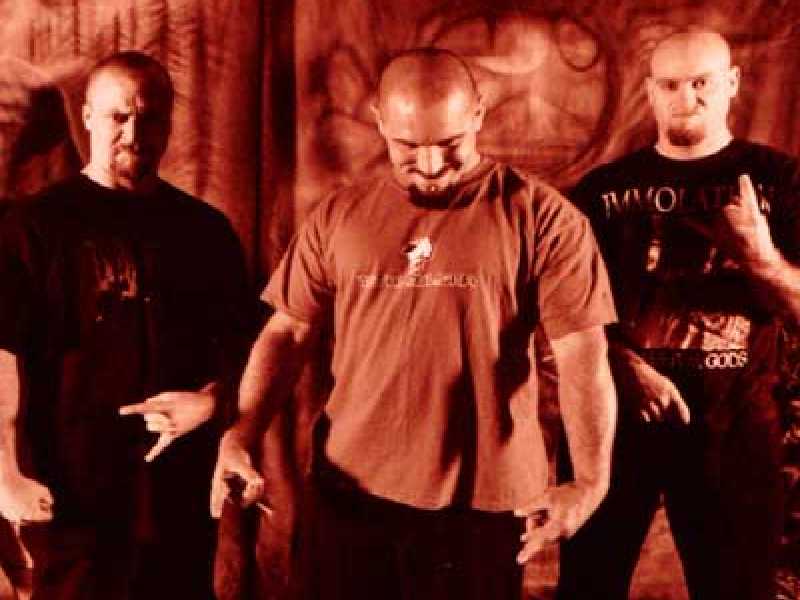 Hamilton’s drumming is more based around blasts and his assault isn’t diversified with interesting fills, rolls, and cymbal crashes. Likewise does his near constant use of the double bass pedals invalidate its intended function, which is to add to the overall heaviness quote and to accentuate especially intense sections. While technically superior in both technique and stamina to his predecessors Mike Hamilton is as much a bane as he is a blessing. The real strength lies in the interplay between rhythm guitarist Erik Lindmark and bass guitarist Jacoby Kingston, both of whom share vocal duties. It goes without saying that at this point the trio’s music would have benefitted tremendously from the inclusion of guitar leads. The inclusion of introductory cinematic studio effects is a negligible attempt to set the scene for each of the songs. These studio enhancements are successful on a surface level but hardly add anything worthwile to the songs they introduce. The songs have become more densely composed, and the riffs now shift even more than they flow. Whatever little nuance “Path Of the Weakening” had is completely abandoned for a more linear writing style that sacrifices subtle melody for increased atonality. Adding to the linearity is the drumming of Mike Hamilton that focuses on percussive propulsion and blastbeats over interesting fills, rolls and cymbal crashes. ‘Fulfilled In Warfare’ briefly allows Kingston to show off his picking skills on bass guitar but it is a throwaway moment in the grand scheme of things. The band’s lyrical maturation is stunted by their refusal to move away even an inch from its established, and decidedly narrow, direction. As such “Mark Of the Legion” is technically impressive, but completely flaccid and soulless.

“Mark Of the Legion” was the last Deeds Of Flesh album to be recorded at Moon Productions in Arroyo Grande, California with Thomas E. Gingell producing. As before it is fittingly bass-heavy with a concrete bass guitar tone, and powerful kickdrums. The guitar tone has increased in clarity, definition and texture, but has lost the thickness that defined the band’s early era. Coincidentally, this was the last album to feature artwork by tattoo artist Jon Zig. To give the record the required marketing push a music video was shot for the track ‘Cleansed By Fire’. In all aspects that matter “Mark Of the Legion” was a considerable leap forward for Deeds Of Flesh artistically. Not even the barrage of introductory sound effects serve to annoy or aggrevate in the long run. Even though the production starts to get more digital and less crunchy the record is still warm sounding. It wouldn’t be until this album’s two successors that Deeds Of Flesh increasingly started to sound overly digital and triggered, which is a well-known ill of contemporary variants of the genre. Deeds Of Flesh for the most part avoided that fate on “Mark Of the Legion”.

As a transitional record it is consistent with the band’s established style while introducing some subtle novelties. Not all changes are improvements necessarily. The visual aspect has improved tremendously compared to the band’s early output. The production values are both a blessing and a curse. All instruments never sounded more clear and pristine, but in the process of digitalization they have also lost a lot of their crunch and much-needed weight. That isn’t to say that Deeds Of Flesh aren’t bass-heavy. The production puts a greater focus on clarity and as a result both the bass guitar and kickdrums, the typical providers of bass-heaviness within a metal context, are pushed to the background, or just robbed of its innate heaviness altogether. What the band wins in productional sheen it loses in visceral intensity and concrete heaviness. At least fellow Californians Disgorge never had this particular problem, though they had some of their own.