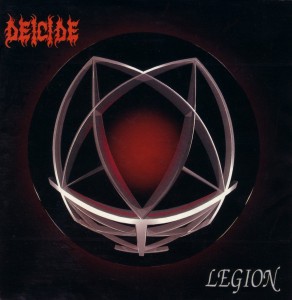 Always one of the lesser Tampa genre bands Deicide had a stable line-up for the majority of its career, yet said stability never translated into consistent quality. The second Deicide album “Legion”, (a loosely conceptual record about the decimation of Christianity by the titular demonic force), is the band’s crowning achievement. Misunderstood on its original release "Legion" is the only mandatory record of the Roadrunner Records era. A monumental and genre-defining record - one whose influence still is felt today in the technical branches of the genre - it was the apex and culmination of Deicide's songwriting. The record is significant for being the key element in a pattern that keeps following the band to this day.

A major difference with the self-titled debut of the year before is how the songs are arranged. The guitar follows the drums, the entire album is drum-centric in its writing. For the last time Benton’s bass guitar is in any shape integral to the compositions. Where the cuts on “Deicide” were obvious tributes to the likes of Mantas/Death, Possessed, Slayer and early Teutonic thrash metal, “Legion” took the band’s songwriting into uncharted territory. Deicide experienced a metric rise in its technical expertise. “Legion” is an intensely savage, abstractly technical offering driven by a sense of pure, unadulterated nihilism. Not merely an album, "Legion" is a statement of intent, a manifesto, a crystallization of its hatred for Christianity.

Driven by a sense of uncertainty and the burning desire to prove itself a legitimate force in the death metal scene Deicide wrote its ultimate statement. No longer content to just ape its inspirations songs as ‘Sacrificial Suicide’ and ‘Oblivious to Evil’ pushed towards a more abstract technical and wholly more ambitious direction. The album consists of leftover material from the “Deicide” session, and newly penned tracks. Opening track ‘Satan Spawn, the Caco-daemon’ was penned by Asheim specifically for the record. Steve Asheim wrote the majority of the album with the tracks ‘Dead but Dreaming’, ‘In Hell I Burn’, ‘Behead the Prophet (No Lord Shall Live)’, and ‘Revocate the Agitator’. Frontman Glen Benton and lead guitarist Brian Hoffman contributed one track each with ‘Trifixion’ and ‘Repent to Die’, respectively.

“Legion” establishes its unearthly atmosphere with the gloomy opening to ‘Satan Spawn, the Caco-daemon’. To the sound of bleating sheep Benton vocalizes ghoulishly, in truth the song title in reverse, before the song kicks in. Keen observers will not a key difference in the songwriting. Not only is “Legion” technical in the abstract sense, with the guitars following the drums instead of the other way around; the entire album is drum-centric in its writing. For the first and only time in the band’s history is Glen Benton’s bass guitar an integral part in the compositions. As savage as the album is Benton’s vocal performance equaling original Kataklysm singer Sylvain Houde in sheer intensity and passion. It seems then only logical that some of Benton’s best lyrics are to be found on “Legion”.

Distinct for being the only album of the Hoffman era to be driven by deeper concept the abstract artwork for “Legion” is far more symbolic than anything that was released before or since. Central to the artwork is the Trifxion, an emblem designed by frontman and lyricist Glen Benton. The red orb inside the Trifixion represents the Judeo-Christian demon entity Legion. The artwork is crafted in such a way that both are trying to “escape” the confines of the album. The inner fold out is the “escape” and relevation of the Trixifion, Benton’s symbolic interpretation of the demon Legion. To symbolically portray the “bubble” ready to explode on the artwork in the music, the ‘Trifixion’ track was placed in the middle. The sample of shattering glass that opens the song is Legion breaking free from its confines, thus becoming the “evil unleashed” upon an unsuspecting world.

Even though the album was once again recorded at Morrisound Studio with death metal specialist Scott Burns producing and mastered by Mike Fuller at Fullersound in Miami, Florida - “Legion” is much more understated and minimal on all fronts, especially in terms of production. The same rings true for the visual aspect of the album. The iconic trifixion on the album cover was designed by frontman Glen Benton. “Legion” as a whole showed a burst to technical showmanship and songwriting ambition that Deicide would never be able to channel again. Described by Roadrunner Records as “evil unleashed” the record, that was delayed several times, was the sole creative plateau that Deicide was ever able to chart. “Legion” would cast a long shadow of its creators, and set in motion a chain of events – having the unfortunate byproduct of resulting in a string of forgettable, turgid, and terrible albums - that would effectively split the band in two opposing factions many years later.

After the relentless speed/death metal assault of the debut “Legion” led to a furiating response from certain segments of the band’s fanbase who longed for a more streamlined, direct assault. Nevertheless the album was extensively bootlegged on tape cassette format in East-Europe, specifically Poland and Russia. Deicide, to its everlasting detriment, caved in to the demands of its fanbase, and subsequently wrote two more straightforward, groove-oriented albums to appease its detractors. Deicide’s regression into groove would eventually foreshadow its doom, even though the band never formally split in the traditional sense.