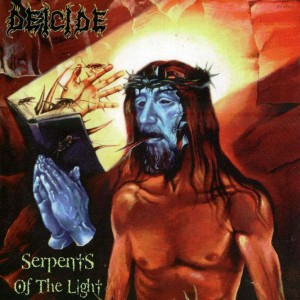 The deterioriation that surfaced on “Once Upon the Cross” is allowed to fester on “Serpents Of the Light”. It is but a whitewash of the preceding “Once Upon the Cross”. Indifferent and uninterested in bettering themselves Deicide persevered with its simplified formula. Even though slightly more eerie melodies are sprinkled through out none of comes even within the proximity of what the band did on the seminal “Legion”. “Serpents Of the Light” is famous for no other reason than that it marked the beginning of Deicide’s darkest era. Soon the band would be consumed by interpersonal conflict resulting in a string of forgettable albums.

Described by the band at the time as a record about the flaws of modern Christianity. On "Serpents Of the Light" Benton identifies the hypocrisies and problems of organized religion, but fails to make a compelling and lasting argument against them. From “Serpents Of the Light” onward the lyrics almost exclusively focused on Benton’s hatred for organized religion, especially Christianity, and its many institutional hypocrisies. Growing increasingly more confrontational, direct and hostile the few subtleties and nuances of “Once Upon the Cross” were abandoned.

Allegedly the Benton-Asheim axis wrote the majority of the record. At this point Deicide’s songwriting had become so streamlined, formulaic, and bland that it makes you wonder why they even bothered. According to Benton tutor Ralph Santolla allegedly wrote all of Eric Hoffman’s leads. The whole endeavour exudes a sense of apathy and disinterest from all involved. While still superior to any of its immediate successors “Serpents Of the Light” is vastly inferior to “Once Upon the Cross”, which itself was a step down from this band’s prime material. Instead “Serpents Of the Light” is the sound of a band slowly imploding. Everything is purely functional, methodical to the point of excess – and completely bereft of any lifesblood and inspiration. A compelling experience this record is not.

‘Serpents Of the Light’, ‘Blame It On God’ and 'Creatures Of Habit’ are essentially three iterations of the same song. ‘This Is Hell We’re In’ seems to be almost autobiographical in the way Benton describes the deteriorating personal – and professional relations with those around him. It has one of the better solos of the record, along with the trio of ‘Slave to the Cross’, ‘The Truth Above’ and ‘Father Baker’s’. ‘The Truth Above’ is, uncharacteristically for this band, about the possibility of extraterrestrial life. Everything that made “Once Upon the Cross” the album that it was has been toned down. Benton’s vocals are more intelligible, and there’s a great focus on his lower register vocals and almost complete lack of his characteristic shrieks. The bass playing, much like Benton’s vocals, is non-descript. Where “Once Upon the Cross” at least sounded marginally inspired, everything about “Serpents Of the Light” is formulaic.

Nizin R. Lopez, a fan who had met Deicide at a Fort Lauderdale show, had brought a painting with him and met all the members of the band. The painting depicted a demonic, serpent-like Christ in a thoroughly diseased fashion. Frontman Glen Benton took a liking to Lopez’ work and a few months later that very same painting would be commissioned to serve as artwork for the planned “Serpents Of the Light”. In an interesting turn of events Deicide had adopted the name of Lopez’ original work as album title for its upcoming then-untitled record. Lopez would later paint the cover to the divisive Morbid Angel album “Formulas Fatal to Flesh”, but would curiously remain a low-key artist despite working with two of Tampa's most popular death metal bands released on major labels for the genre.

There’s a case to be made that Deicide, never a band concerned with nuance, or subtlety, received the kind of production befitting of its primal style. Even though the band once again recorded at Morrisound Studio with Scott Burns behind the console the production is decidedly more low-key and down to basics. The guitar tone is crunchier, and there’s a greater bass guitar presence than on the preceding album, but on the whole the production is rougher all around. As one of the earliest instances of unfair budgeting “Serpents Of the Light” lacks the visual and sonoric gloss of “Once Upon the Cross”. It was the last of the Roadrunner era to have the luxury of a band picture, and a promotion campaign worthy of the name.