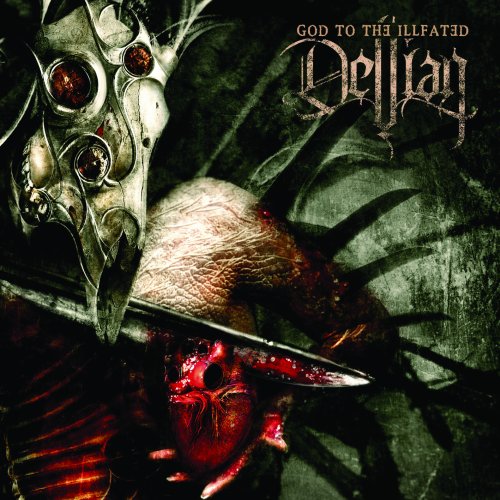 The second Devian album isn’t so much of an improvement over the first as it is a mere continuation. Granted, at least the songs are structured better and more fluid on this album. The reality of the situation is that Devian never was a special, or good band to begin with. The debut did what it set out to do, but beyond covering the basics there was little substance to speak of. Devian partially benefitted from the thrash metal revival which coincided with their two albums, but even then the reaction to its output was lukewarm at worst and mildly positive at best. Of the two albums they put out this one is the best. The addition of a new second guitarist and a bassist (Tomas Nillsson had moved to the guitar slot by this point) does little to make “God To the Illfated” sound substantially better than the debut from the year before. An amateurish, cheap-looking promo video was shot for ‘Assailant’, but it did little in terms of visibility for the band. Unsurprisingly, after the touring cycle for this record the band fell into disrepair once Hagstedt announced his departure to concentrate on his occupation as a tattoo artist.

One of the things that “God To the Illfated” does do right, is that it no longer seems confused as to what it wants to be. For better or worse, this is a Swedish melodic death metal record first, and a thrash metal record second. This clear sense of purpose, and direction, makes it more focused and more coherent to the debut from a year before. The songwriting has marginally improved, but is still marked by the same ills that plagued the debut. There’s a lot of classic Swedish death metal influence with this record. The melodies, chord progressions and the overall song construction are heavily indebted to the likes of Dissection, Necrophobic, Sacramentum, Unanimated and some older Stockholm outfits of this style. It isn’t quite as traditional and conventionally death metal as say, Grave, Dismember or Unleashed – but it shares the same sense of darkness and hopelessness with them. The record is fairly upbeat and energetic, which comes mostly from the band’s thrash metal architecture, but this album is also a lot darker than “Ninewinged Serpent”. The band still insists on playing midpace exclusively, and despite the wider palette of influences, the dynamic range is still enormously limited by this lunkheaded decision. Breaking with past tradition is one thing – and a thing I can actually get behind, but should songs and an album suffer in the long run because its players don’t want to play a certain style or technique anymore? No. They shouldn’t.

There’s a great prominence of rocking, almost swinging guitar solos – and their presence helps forget that all these songs sound mostly the same. The tempo is more varied, and the tracks are far more dynamically richer compared to the debut. The tempo of choice is still midpace, but that is now enhanced by faster and slower sections. Much of the directionless meandering and plodding of the previous album has been rectified in favor of a more spirited, leaner song construction. It is a small change, but one with important consequences. The record flows better, and it isn’t a chore to sit through. Despite all these improvements “God To the Illfated” still sounds like a number of re-worked b-sides from the “Ninewinged Serpent” session. It depends what you come to look for in a band, but progression is only minimal with Devian in that regard. With barely a year in between records it is folly to expect much progress from one album to another, yet nobody was pushing the band to release an album so quickly, but themselves. Like with the debut the tracks here are all adequately performed and recorded, but like that album they are mere shells of what they could have been. These tracks could have been the foundation for an excellent, technically inclined death/thrash metal hybrid if they were given the time to properly gestate and grow. No such luck here, and “God To the Illfated” sounds as close to “Ninewinged Serpent” without being a direct clone. That is to the detriment of the record and the band because this could, no, should have been better.

Even in his later years with Marduk, frontman Erik Hagstedt was often criticized for his subpar vocals. The same problem presents itself here. Hagstedt’s rasps are his weapon of choice, and thankfully he deviates from them little. Whenever he attempts to shout, scream or sing cleanly – it becomes painfully clear just how shot and hoarse his voice truly sounds. In an attempt to hide their frontman’s vocal shortcomings there are backing vocals to offer up some respite.  The rest of the music is perfectly functional for what it attempts to convey. You can’t shake the impression that you heard this before, and often much better at that. No, “God To the Illfated” is far from bad, but it isn’t good either. Nothing about this album screams out in any department you choose to look. It looks good, it sounds good and it has the proper elements in place – yet it does nothing remotely interesting with the cards it is given. This album is pedestrian and mediocre. It is death/thrash metal by Marduk members, and that’s apparently the only thought that went into the creation of the band, and its albums. It is also the only selling point the label used to push at the time – and, admittedly, it worked wonders. Devian should have been an amazing metal band by proxy, or by association – whatever you want to call it.

Devian are to Swedish melodic death metal as to what Diabolic are to Tampa, Florida death metal: the most generic, inoffensive, stock incarnation of an otherwise reliable and exciting style. There isn’t any shame in embracing that innate derivateness as long as it is done with a respectable amount of gusto, finesse and energy. Devian possesses two of those three traits, yet inexplicably and despite the higher overall tempo, “God To the Illfated” sounds unenthusiastic, lifeless and without energy. Almost like a band tired with its chosen style, and tired with itself, for that matter. Not even the improved songwriting and better recording can lift the spirit of this band. Given that this was only the second album, and all involved in its creation were experienced professionals in various capacity, it was only right that Devian decided to call it a day. No band should be forced to carry on when the passion is gone – and the passion is long gone here, sadly.