Somewhere in the early 2000s the mid period Marduk line-up splintered with vocalist Erik Hagstedt and drummer Emil Dragutinovic exiting the fold. It was perhaps not surprising that both men eventually ended up forming a new band that sounded anything like their previous engagement. Thus was born Devian. Devian was a shortlived Swedish death/thrash/black metal group that was active from 2006 to 2011. It originally went by the name Rebel Angels (and Elizium for a bit after that) and featured two prominent Marduk alumni in vocalist Erik Hagstedt and drummer Emil Dragutinovic. The band managed to release two albums on Century Media and put in some touring before imploding due to line-up changes and life’s general difficulties. Like so many splinter projects of more popular bands Devian wasn’t bad, but it remains questionable whether their existence added something to their direction of choice. The answer to that is as clear as it is obvious: no, Devian didn’t add anything to melodic death metal, or black/thrash metal. It does both genres well enough, but that’s about it. 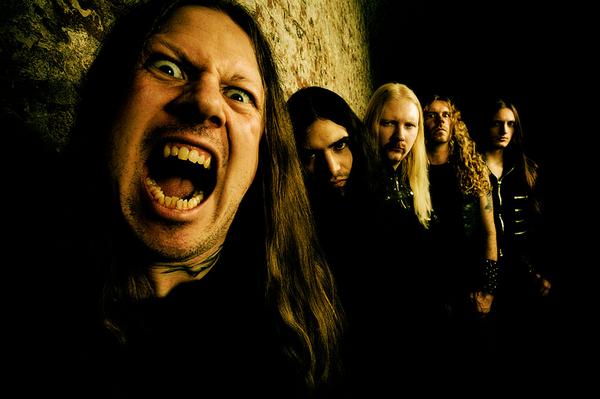 “Ninewinged Serpent” is, above all else, a record in stark contrast in writing to the duo’s previous work in Marduk. Whereas that band (at least in its mid period) seemed to focus on one-dimensional blast-oriented high-octane black metal, Devian is anything but that. There isn’t much speed or blasting to be found on this record – and whenever it appears it is only used sparingly. While Marduk post-“Opus Nocturne” was never a great master of dynamics or compositional range, Devian is equally as handicapped in that regard. What the band play is better than most of its contemporaries, but the adamant insistence on playing exclusively midpaced with little to no deviation makes the record an exercise in tedium. While this is refreshing in itself for the first two or three tracks, by the time you reach the middle of the album one is wishing that Devian would just let things rip and change the tempo and dynamics up a bit. It is a one-trick pony, and the trick itself isn’t remotely exciting or spectacular enough to warrant all the attention.

‘Dressed In Blood’ is about as far from Marduk as one can get. It’s a deathly thrashing metal variant that is both melodic and dark but energetic. It hints upon something malevolent and threatening just below the surface - but it never goes there, it never comes out. The track never delivers upon its initial promise. It is characterizing for the band that most of their songs are meddling, middle-of-the-road affairs that do what they do well, but fail to go anywhere remotely exciting in the process. Yes, it stands to reason that it is fun to hear former Marduk members venture into death – and thrash metal territory, but that alone isn’t enough to sell the record. Devian doesn’t go for either direction convincingly. It isn’t dark, heavy and hateful enough sounding to be purely death metal, and it misses the adrenaline-fueled excitement, the neckbreaking rhythm sections or the groove one would associate with thrash metal. The black metal influence is minimal, and outside of Hagstedt’s serpentine rasps there is little to associate it with that genre. “Ninewinged Serpent” does a bit of everything, but doesn’t do any of those things convincing enough to impress. The same basic ideas get repeated over and over again, and the album goes nowhere. There’s no journey to be had. No climax, no payoff.

That’s the major and only problem that plagues this band and this debut. It’s been done before, often times better and in more exciting ways. At times it even feels like the songs of this album needed more time to gestate and to properly grow. Instead they were hastily stitched together and recorded in order that Century Media could push the album out. While it is great seeing former Marduk members band together and writing music again, it leaves you wondering what could have happened if Devian didn’t get signed, and had transformed into another musically more ambitious and conceptually stronger unit. The skill level is obviously present, but this band feels so ordinary and mundane for players of this caliber. Emil Dragutinovic is capable of much better than the predictable and laidback thrash beats he dishes out, the riffing is solid but not particularly strong and the songwriting bounces in all directions, but never decides what it really wants to be. Erik Hagstedt is his usual self, and at least his lyrics are slightly more personal than the corny, goofy things he was obliged to write under the Marduk banner. Devian is just the sum of its parts – and that sum isn’t particularly strong or remarkable in itself.

In fact, if this wasn’t for the label muscle and the involvement of said Marduk members, you’d be hardpressed to tell this apart from the hundreds of melodic death metal bands in the underground. There’s no two ways about it. This album sounds so ordinary, to the point of being cliché that it’s even painful to listen to just because of how underachieving and mediocre the entire premise sounds. Yes, the songs sound good, they are adequately recorded and there’s some energy to them. Yet nothing screams out to the listener, these are mere shells of stronger and better songs. There’s better bands with less starpower that write much better, more poignant music than what these established figureheads have cooked up here. Devian was one of the earlier bands to use the digital artwork of Greek artist Seth Siro Anton from Hellenic symphonic metal act Septic Flesh, and that’s the only spark of originality in this otherwise mundane and too non-committal sounding death/thrash record. And that’s a shame, really… because this could have been so much better on all fronts – but it just isn’t showing here, nor would it be on the second album.